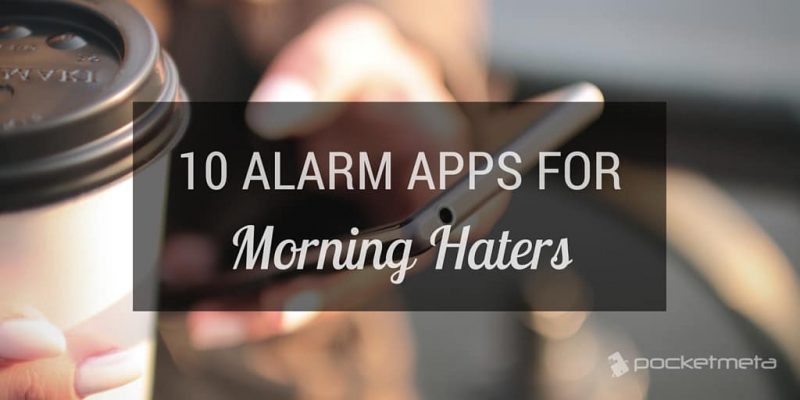 I’ve always despised the annoying sound of the alarm clock during my childhood so now I’m fully taking advantage of modern alarm apps to make my morning wake-ups as gentle as possible. However, not everyone is as sensitive as me, in fact some people could sleep through the sound of a gong. Well….this may be an overstatement, but not too far from the truth.

If you’re having trouble waking up in the morning then you probably went through all possible scenarios: hitting that Snooze button over and over, dismissing the alarm and going back to sleep or even ignoring it completely.

Unfortunately, sleeping in late is a luxury we can’t afford, especially during work days so here are some of the best alarm apps that use ingenious ways to ensure you manage to crawl out of bed every single morning.

iCukoo is a charity alarm clock and this means every time you hit the Snooze button, you’ll also donate a small amount of money to the charity of your choice (from the ones supported by the app).

You can set how much each snooze is worth and when your snoozes add up to £1 you’ll be prompted via SMS to donate the money or let the amount grow for a few more snoozes. It would have been interesting if iCukoo was to directly send the money as soon as you hit snooze – well that would have been a real motivation to get out of bed before you become a charity case yourself! At the very least you know your oversleeping is actually helping someone in need.

A screeching alarm sound is not enough to make you return from dreamland? I can’t Wake Up! Alarm Clock has pretty much every scenario covered. You can set it to require performing various wake up tasks like math equations, puzzles, shaking the phone really hard and even scanning the barcode of an item you own (which should preferably be located in another room).

And don’t even thing about dismissing that alarm and going back to sleep. A few minutes after that, the app asks you to perform an Awake Test and if you fail it, the alarm is turned back on. There is no escape.

This app requires you to get out of bed and spin around to make the alarm stop and no, you can’t do this while you’re in bed. At the very least you can spin to your favorite music to make this task a bit more enjoyable.

Of course, SpinMe Alarm Clock also offers its own collection of alarm tones of various intensities. I wouldn’t recommend you try it when you’re hungover though.

This interesting app was released by Microsoft last week and it definitely caught my eye. Mimicker’s take on ensuring you wake up in the morning is to make you play a game called ‘Mimic’. How this works, is the app will give you an action, which can be speaking a phrase, capturing a selfie or getting out of bed. And things are not that simple as they seem.

Regarding the selfie part, you’ll be required to match a specific expression and the phrase you need to speak in order to dismiss the alarm is going to be a tongue twister – definitely a challenge first thing in the morning. And yes, you can share your bedhead selfies although I’m sure most people won’t feel too proud about them.

Unless you’re OK with throwing your phone out the window, Alarmy will keep bugging you until you finally do what it asks to show you’re awake.

The rules are simple since there are only two ways you can stop that alarm from piercing through your brain: a) shake the phone for a number of times (you get to choose how many) or b) choose a room from your house (the wise choice would be the one that’s furthest from your bedroom) and register it in the app, then every time the alarm starts ringing you need to go in that room and snap a photo of it.

CARROT is a witty alarm clock led by a quirky AI whose main mission is to make sure you wake up in time every morning. She’ll wake you up with fun dialogue and songs so you don’t get the same boring alarm day after day.

But here’s the catch. CARROT also wants something from you, in exchange for waking you up. To dismiss the alarm, you’ll have to either shake, swipe or pinch your phone and you even get rewards for your consistency. You may hit that Snooze button once or twice, but don’t overdo it,  or you’ll meet the angry CARROT that will make the alarm go off again and possibly make fun of you. You’ll be pissed, but also awake!

Morning Routine has the clean Material Design layout to make it fit nicely on your Android and it can work as a traditional alarm, meaning you can just tap a button to dismiss it. However, you can also set it to require scanning a barcode and if that specific item is in another room, chances are you won’t go back to sleep after that short walk.

Morning Routine offers other customization options as well, such as the ability to open a certain app or website you’re used to visit first thing in the morning. Even more, you can set multiple steps like the one I just mentioned and Tasker support further expands possibilities.

If completing puzzles, running around the house, or grinning at the camera seem incredibly annoying to be done while you’re still half asleep, Wakie comes with an alternative way as it practically assigns you a stranger to give you a wake-up call.

This may seem odd, but you can actually select a topic from the given list so lets just say the stranger will be somewhat compatible with you. If you’re worried about your privacy, it’s not the case as all calls are anonymous. And in case the Wakie network can’t find a community member available for the time you need to wake up, the app’s robocaller will call instead.

Shake-it Alarm is another simple app that offers various ways to dismiss alarms which ensure you’ll actually drag yourself out of bed. To remove an active alarm you’ll have to either shake the phone, scream (and potentially wake up your entire family and your neighbors), tap the screen repeatedly or select the random mode so you’ll never know which of the above mentioned challenges you’ll have to complete the next morning.

You can also install some add-ons for extra features like getting your daily weather forecast and news within the app or the ability to customize your alarm sounds, as well as a special option to text a friend and ask him to call you if you fail to dismiss the alarm within the  set time.

Rise & Shine is the alarm app that wants you to wake up with a smile on your face. Literally. You have to smile to wake up. And you can even edit your bed head to make it shareable if that’s your thing.

But this is not the only interesting feature available in Rise & Shine. The app also lets you add vibrate or strobe to your alarms in case sound is not enough to get you out of bed and it suggest optimal sleep times (based on sleep cycles) to recommend alarm settings for waking up more rested.

I’m sure you can find at least one app in this selection that can push you to leave the bed every morning and never be late for work again. And if you know any other useful alarm apps for heavy sleepers, share them with us in the comments section below or drop us a line on Facebook, Twitter or Google+.