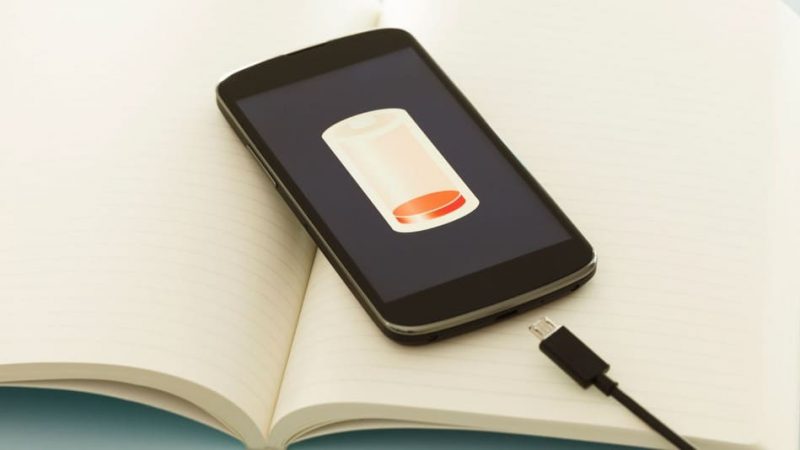 Besides apps, services and the operating system itself, smartphones have large screens that are notorious battery hogs. It’s true they practically offer the world at our fingertips, but not for too long if you’re away from a charger or don’t have an extra battery on hand.

Of course, some smartphones like the HTC One M9 and the One Plus One have bigger batteries that can make them last at least 12 hours even for heavy users and probably closer to a full day for the rest of the crowd. But these phones are the exception, and the truth is most smartphone owners that actually rely on their devices are searching for ways to make the battery last longer. Here are some of the best things you can do to make your Android device less power hungry.

Most smartphones, not just Android devices, have Lithium Ion or Lithium Polymer batteries. Both types work in a similar manner, and they have no “memory” (this is a problem Nickel Cadmium batteries have). In other words, they can handle partial charging, and you don’t need to fully charge or discharge them the first couple of times.

One of the problems with Li-Ion and Li-Polymer batteries is they have low voltage problems and perform best when you partially charge them, for example from 20% to 90%. The general rule of thumb is it’s usually better to unplug your phone from the charger before it hits 100%. Occasional (think once a month or less) full discharge cycles are useful for battery calibration, though.

Also, and this is very important, the worst enemy of Lithium-based batteries is heat. When regularly used in heat, this type of battery degrades, which means in time its maximum capacity will lower at a faster rate. So make sure you keep your smartphone covered while you’re at the beach, don’t just leave it in the blazing sun.

Lower the brightness and set a shorter screen timeout 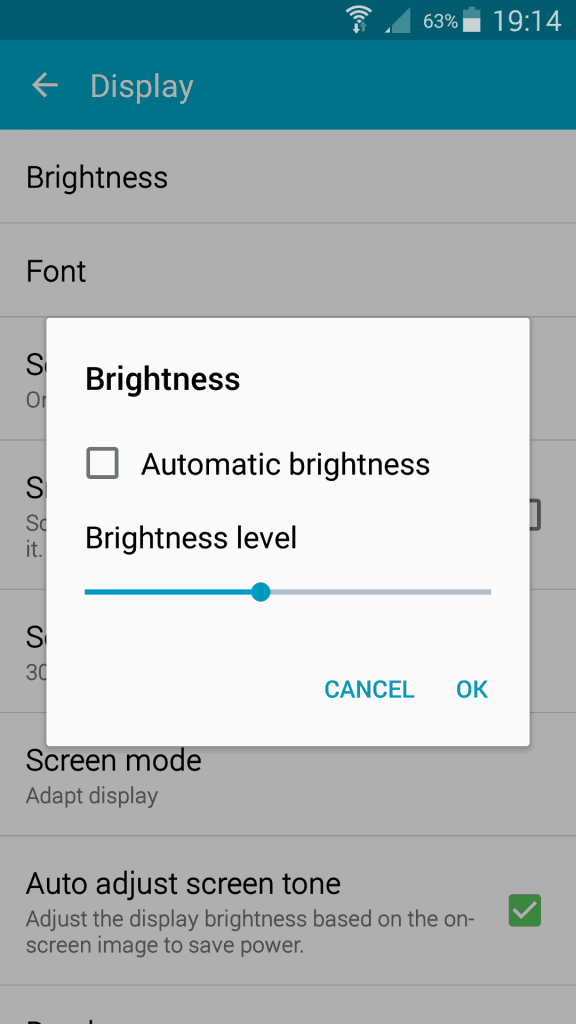 The brighter the screen, the more battery it will consume – this is as straightforward as it gets. As a result, try to manually set the screen brightness as low as it’s still comfortable – 50% or lower is best. Do not use Auto Brightness (Adaptive Brightness in Android 5.0 Lollipop) as it will usually set the brightness level much higher than you need it.

The screen’s sleep time should also be set as low as possible. Most of the times, the default setting is 30 seconds, but if you’re turning your smartphone on often, it’s a really good idea to set it to 15 seconds or at the very least keep it to 30 seconds.

Use the Battery Saver mode 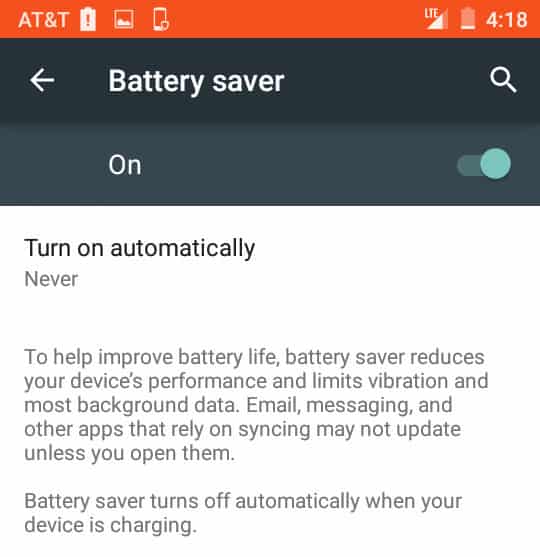 Many (although not all) Android smartphones have some sort of a Battery Saver mode. It’s a built-in feature of Android Lollipop but it may be called differently on your phone, as some manufacturers like Samsung for example, offer a modified version of it. On some smartphone models, it can be set to automatically enable itself once the battery drops below a certain level.

Battery Saver mode restricts background data and lowers the performance of your device, but it’s usually noticeable only in resource intensive games and apps.

Turn off NFC, Bluetooth and other settings 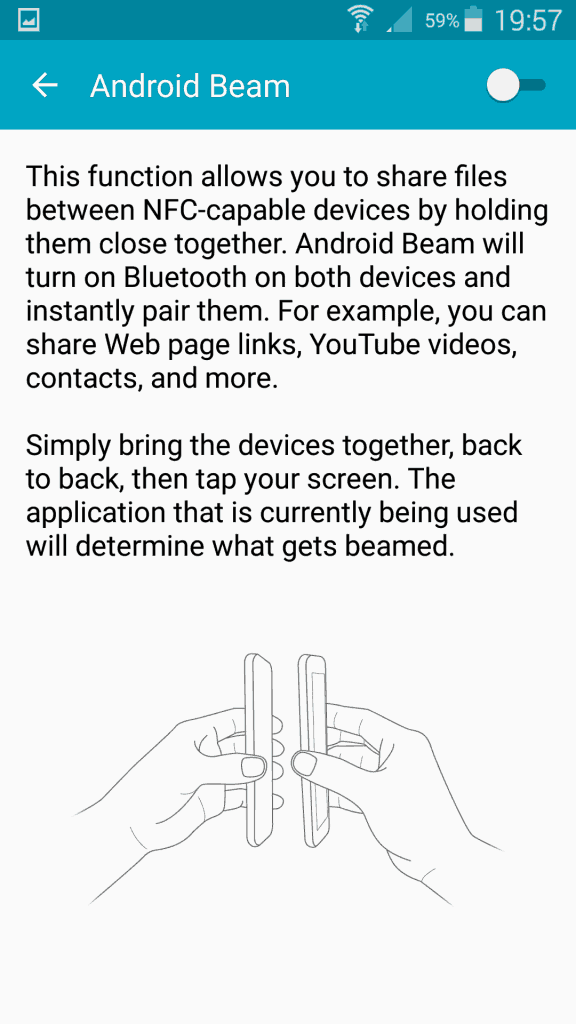 NFC offers a simple method to connect your Android phone to another phone, digital cameras and Bluetooth speakers by simply holding them close to one another. However, NFC, just like Bluetooth is used only on occasion so there’s no need to keep either of these settings turned on all the time. Usually, Bluetooth is disabled by default, but NFC might not be.

On Android devices running 4.0 and higher Android Beam is included, an app that lets you use NFC to share all sorts of information like contacts, photos, web pages and YouTube links. While it’s definitely useful, keep it disabled when you’re not using it. 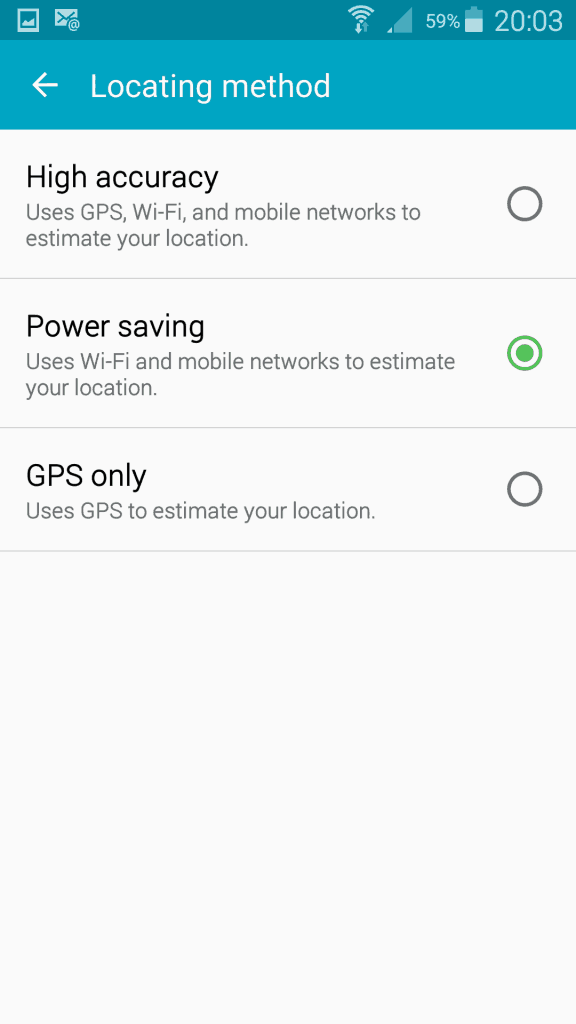 Location services can also be optimized for lower battery usage – the Settings usually allow you to set your phone to use only WiFi and mobile data to estimate your location, instead of relying on GPS too.

Lastly, there’s the WiFi and cellular data issue – it makes sense to keep either on if you really need them. In fact keeping WiFi set to “Always on during sleep” is a more battery-friendly choice than having it reconnect every time you wake your phone if you’re a heavy user.

Use dark themes and wallpapers

This may seem an odd method of saving battery life, but it does work for AMOLED and OLED displays. This type of display illuminates only the colored pixels, so when black needs to be displayed the pixels are not lit. This is what is called “true” black. At the opposite pole LCD displays have a backlighting system that illuminates all pixels on the display, regardless which color needs to be shown.

There are many smartphones with AMOLED and OLED screens: most Samsung devices, LG G Flex 2 and the Nexus 6 are just a few examples.

If your Android phone has an AMOLED display, using darker app themes and backgrounds as well as dark launcher themes and of course your home screen’s wallpaper can significantly improve battery life. Plus they go easy on the eyes too!

Turn off unnecessary vibrations and sounds

As long as you’re relying on sound to hear incoming calls and notifications you don’t really need vibrate. It’s best to switch it off in that case, as your phone uses more power to vibrate compared to ringing.

Also, haptic feedback (the buzz that creates that sense of touch while you’re typing on the keyboard), offers some extra awareness, but at the cost of draining your battery a bit more. You can disable it in your phone’s Settings -> Sounds and notifications -> Other sounds, along with other sound functions you may not need like the dialing keypad tone and screen lock sound.

Widgets can come in handy as they let you see condensed information or offer shortcuts for frequently used apps, but using too many of them on multiple home screens will take a toll on battery usage. Also, some widgets connect to the Internet, which is another battery drainer you may not need.

Bottom line: keep the widgets you actually need, ditch the rest and simply use their respective apps instead. It’s equally efficient but much more battery friendly. You can remove a widget by long pressing on it and then swiping them to the trash can icon. 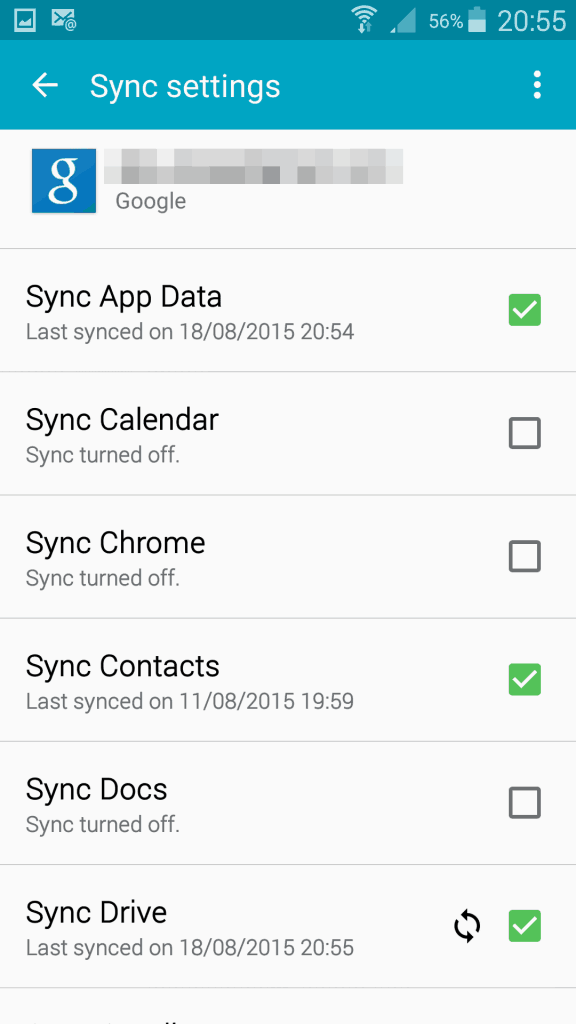 If you don’t need your Google accounts synced regularly, head to your phone’s Settings -> Accounts -> Google and turn off auto-sync for those apps you don’t need constantly updated. Many of these apps (and also third-party apps) let you manually refresh them, so depending on how often you need them synced this option can be just as good while making your battery last a little bit longer. 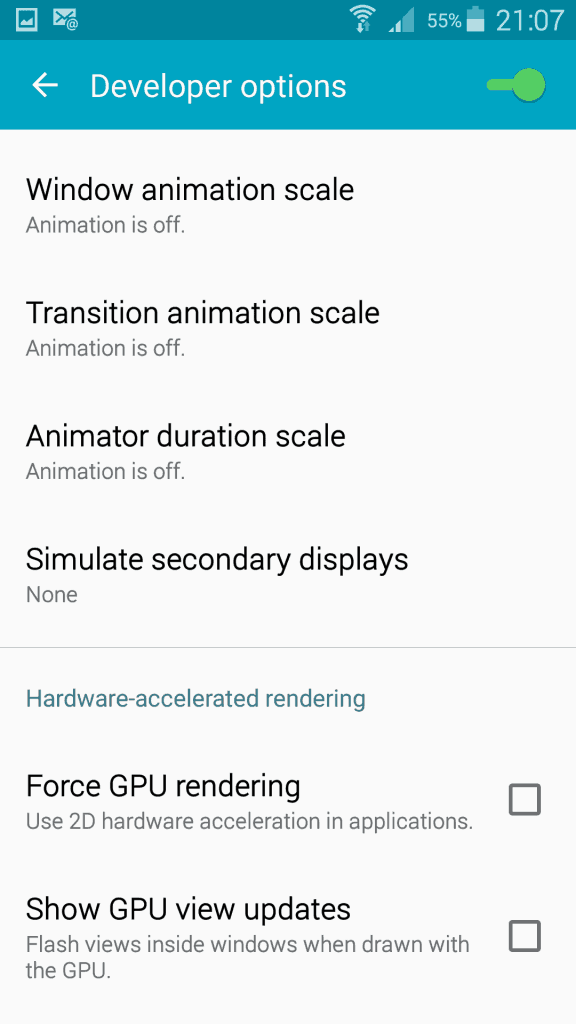 Android’s transitions and animations have the eye-candy factor but no magic comes free: the more you browse through your phone, the more battery they’ll consume. If you’re wondering where these settings are, you should know they’re one of the settings included in the hidden “Developer options” feature.

To turn it on, go to Settings -> About phone (or About device) and tap seven times on the Build number. This will enable “Developer options” which you can find under the System category in the Settings. Scroll down until you get to the “Window animation scale”, “Transition animation scale” and “Animator duration scale”. Turning all three off will help save some battery and your phone might also run a bit faster. 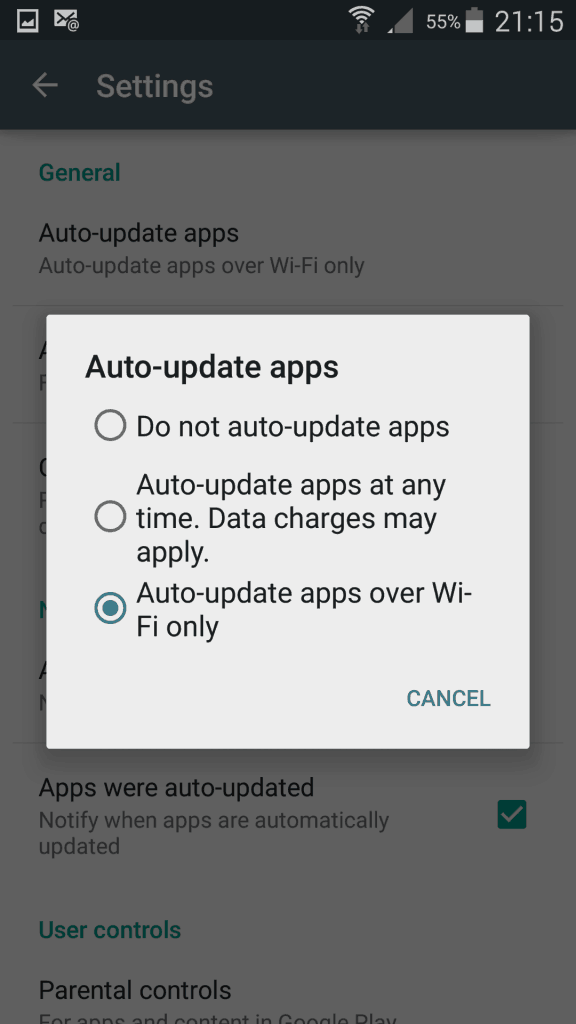 This may seem a bit drastic, but no one wants to suddenly realize there’s a seemingly endless queue of apps automatically updating when their phone is running low on battery. A viable alternative would be to turn off automatic updates (from the Play Store settings) and update apps manually when and where it’s convenient, like at home with a charger nearby.

There’s a reason why apps receive updates: besides shiny new features, functional improvements and security patches, there are also memory and battery optimizations dedicated developers are regularly implementing into their apps. Having the latest updates means your apps have the best and most recent optimizations. Of course not every app update brings over battery optimizations but at least you know you did your part in making sure they reach your device as soon as possible.

The above mentioned battery saving tricks work on pretty much all Android smartphones (and some even for other operating systems). However, manufacturers and custom ROMs are implementing their own battery saving features and I encourage you to explore them. For example, Samsung has the Ultra Power Saving Mode, HTC has the Extreme Power Saving Mode and so on. Usually, these are available in the Settings Battery section, where Android’s stock options are too. They’re certainly worth giving a try when you’re phone is running low on juice and you’re nowhere near a charger.

What do you do to save battery on your Android device? Have you discovered other useful battery saving methods worth sharing?

Share this article with your friends if you liked it and visit our Roundups section for more carefully handpicked apps, games and everything else mobile. And don’t forget to follow us on Facebook,Twitter,Pinterest, Flipboard and Google+ to receive our latest mobile how tos, and apps & games reviews for Android, iOS and Windows Phone !