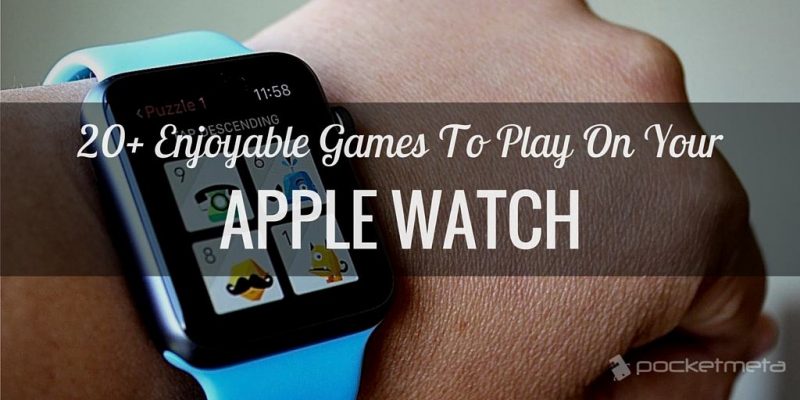 The Apple Watch is most appreciated for productivity and activity tracking, and playing games on the wrist might seem an odd thing to do, given the super tiny screen compared to the one of an iPhone or an iPad. That hasn’t stopped developers from bringing Apple Watch support for their games, and even creating titles specifically for the wearable. And if the small screen is not a turn-off, there are plenty of awesome games you can try on your watch, the hardware being more than capable to handle such tasks.

Of course, not any type of game is suitable for the Apple Watch. I can’t imagine playing Hearthstone from my wrist, or a complex PvP game like Vainglory, but other genres fit quite well on the small screen. In fact, you’d be surprised how many developers jumped at the opportunity to make their games available on the watch, as soon as it was released.

Don’t miss: 12 Essential Apple Watch controls to use it like a pro

Below we’ll take a look at some of the best titles supporting the Apple Watch, so you can have plenty of options when deciding how to unproductively spend your time, while you’re commuting to work.

Puzzle games are perhaps one of the most suitable types of games for the Apple Watch, and Brainess will give you plenty of tests and puzzles to keep you busy during breaks and dull moments. In fact, it makes for an excellent time waster as it bundles various micro games from color and word matching, equations and number games to memory tests and card pairing.

Lifeline 2 is the sequel of the popular Lifeline game, and while it is available for the iPhone and iPad, the Apple Watch is the environment where it fits best. The game takes you through its complex story in real-time and you get to play as Arika, a woman set to save her brother and avenge her parents.

Success depends entirely on the decisions you make throughout the story as Arika will have to face many obstacles during her quest. And even if you complete a story branch you can go back and make different choices to discover other outcomes. No Internet connection required.

If you’re looking to give your brain a six pack, Elevate was designed specifically for that. Perhaps it’s an overstatement, but the game promises it can improve your skills in multiple areas, such as memory, speaking ability, focus, math skills and others.

What’s definitely true, is Elevate creates a personalized training program which changes over time based on your progress to improve results further. It bundles over 30 different games and the Pro version gives you access to additional materials plus unrestricted access to all the games, but honestly, Elevate is very good even as a free title.

Trivia Crack brings you the classic game on your wrist to play against another online player and there are hundreds of thousands of questions so you won’t run of material anytime soon. The game also lets you create your own questions, collect cards and chat with your opponent. No cheating…OK?

Evolution: Heroes of Utopia is an RPG that fully supports the Apple Watch and it may not be the only one, but it’s certainly among the best. If endlessly tapping on the screen of your watch to defeat various foes seems appealing, you should definitely give it a try. Of course, the loot you earn from all those kills can be used to unlock several characters that can continue the fight when you’re not actively playing. As you progress, you can also get new skills, upgrade your weapons and team up with your friends in epic battles.

Twisty Color is a simple, yet attractive game designed specifically for the Apple Watch. It leverages watchOS 2, that allows you to control UI elements using the Digital Crown. The game lets you use the Digital Crown to handle a Twister in order to match the color of its surface to incoming bullets.

There’s nothing complex about the game, but it does offer a challenge (fail to match the color of an incoming bullet three times and it’s game over), plus using the Digital Crown instead of tapping, lets you see the screen instead of covering it with your fingers.

Rules! is another addictive puzzle game offering the so called brain workout. It bundles several mini games with three difficulty levels to choose from and interesting mechanics. The main idea is to follow the rules, which seems simple enough, but not when you need to remember 8 of them! Give it a go and let us know if your brain has the muscle to beat Rules!.

This Mafia-themed RPG lets you enter the criminal life from the comfort of your wrist, with no chance of actually getting shot or imprisoned. You’ll have plenty of jobs to complete while fighting enemies (including other players), calling in hits, upgrading your equipment, teaming up with friends and even send messages to both friends and foes.

As a true mobster you’ll also have the delight of taking revenge on those who dared to attack you, and through Facebook integration, Mafia Watch allows you to easily invite more people into the underworld.

Best Fiends is a beautiful puzzle adventure, taking place in the world of Minutia where you can play an array of games with the Watch app featuring turn-based gameplay. As always, there’s a fight going on, and in Best Fiends your enemies are the Slugs. To defeat them, you’ll have to upgrade your characters and unlock new powers. Also, the Watch version comes with exclusive events, locations and enemies to keep you entertained while you’re away from your iPhone.

Letterpad is a fun word game that gives you a topic and 9 letters to find related words. Think of it as an upgrade to the classic Hangman with over 200 puzzles to complete. More puzzles are being regularly added by the community members and the game is add-based but free to play. The only purchasable items are hint packs, but if you’re a pro at these sort of games you can easily do without them.

Runeblade is an excellent adventure game that was one of the first titles designed specifically for the Apple Watch. There’s an epic battle, and an epic hero (you), spells, artefacts and everything else needed for a great fantasy adventure.

The game has an interesting rune enchanting mechanic that can be used to unlock special powers and as you progress you can unlock magical artefacts and other special achievements. Without a doubt, Runeblade is a must have Apple Watch game if you’re an RPG fan.

Nuggets wants to test your eye-hand coordination by asking you to name the color of the word that is written and not the word itself. For example, if the word is ‘Red’ but it has a blue color, then the answer is blue.

It’s a straightforward rule, but things can get increasingly difficult as you’re on the clock with little time to deliver the right answer. What’s more, the game runs natively on the Watch so it doesn’t need to be connected to the Internet or your iPhone to play it.

The endless runner has been highly appreciated in both its first and second version, the Sonic Dash 2. The latter, comes with better visuals as well as gameplay. You can’t exactly play the game on the Apple Watch, but the companion app does allow you to collect new prizes earned by playing on your iPhone and one more cool thing. It uses the sensors of your watch to let you earn more in-game prizes as you walk and run in real-life. Talk about fitness motivation.

If you ever dreamed to become a secret spy like James Bond, Spy_Watch is an interesting game that brings us regular folks as close as possible to being agent 007. This is a text-based game that sends notifications and commands on your wrist, and you have to make choices to progress through the story. Just don’t get too caught up in the action as you might start ignoring your call and email notifications as you’re waiting for Spy_Watch updates on your wrist.

If the games above are not enough for you, here are some more quality titles you can check out, when you feel like having a bit of fun on your Watch:

Blackjack Anywhere – There are too many Blackjack games for the Apple Watch and most of them are disappointing to say the least. This one is one of the few exceptions, and the small $1.99 fee is more than worth it, if you want to actually enjoy playing Blackjack from your wrist.

Timecrest – A captivating story based game that takes place in the devastated world of Alyncia in which you get to play as a young mage named Ash, who has the power to alter time.

WarpJammer – This is a classic shooter game in which you can blast alien ships just like in the good old days. The 8-bit soundtrack and sound effects only add to the retro feeling.

Chess Watch! – Chess is a classic game that will never die and it makes sense you should be able to play it on the Apple Watch too. Chess Watch! lets you play against online opponents and you get to make the moves using your voice. Queen to D4!

Alien Invasion – This simple, yet fun time-waster lets you use the Digital Crown to control your ship, in order to rescue your fleeing army and maybe have a chance at keeping your commander status, in your botched attempt to take over Earth.

The Martian: Bring Him Home – Another choice-based game, but this one is based on the popular movie “The Martian”. You can play as a NASA communications specialist which is the only person astronaut Mark Watney is able to talk to. In the end, you making the right choices is the only way to bring Watney home from Mars.

QUEStiny – An entertaining puzzle game available exclusively for the Apple Watch that requires you to collect treasure chests containing all sorts of goodies, but only if you can find the safe path through the 9×9 grid.

Tamagotchi Classic – It seems a bit silly to want to play Tamagotchi in 2016, but I can definitely see the appeal of having a digital pet for the younger crowd. This game is very similar to the original and fully playable on the Watch.

What other fun games supporting the Apple Watch have you discovered and which is your favorite title from today’s roundup? Let us know in the comments section below and follow us on  Facebook, Twitter or Google+ to stay up to date with the latest apps, games, guides and everything Android, iOS and Windows Phone.