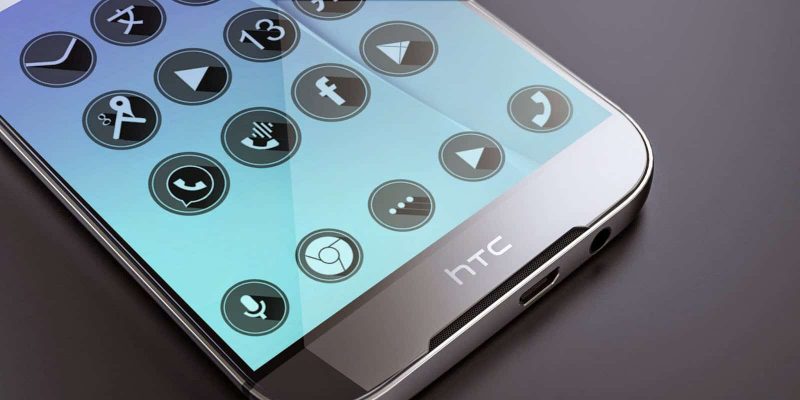 Android is a customization heaven, now more than ever, as there are so many ways you can personalize your device. It’s true, nothing offers more freedom in this area than rooting – besides a great selection of custom ROMs you can choose from – there’s also a plethora of apps for rooted phones offering functions you wouldn’t get otherwise.

But not everyone wants to go that far, and truth be told, rooting makes no sense if you don’t plan to take advantage of it. However, another great alternative is using a launcher. You won’t get all the functionality of a rooted device, but launchers do offer a wide array of options, that let you change how Android looks and feels, in some cases so much that it seems like a completely different OS.

One of the best things about launchers, is they install as regular apps – from the Play Store or as APK files. This makes them accessible even for those who are not so tech-savvy, and the risks of installing a launcher are the same as for any other app.

At first sight, a launcher might seem like a theme pack, but this type of app, bundles so much more functionality. Besides simply changing the interface, launchers let you control transitions and graphics, replace the app drawer, setup new gestures, add custom widgets and so much more.

In today’s roundup we are focusing on those launchers that are absolutely free – this means no paid version of them is available. As always, we carefully handpicked those who manage to standout in the crowd and are still under active development.

Just be aware, that lately manufacturers are focusing more on improving their stock launchers and although you are able to replace the built-in ones, there’s a chance some of functionalities third-party launchers offer will be unusable. This is still not enough reason to try out a few, surely at least one will meet your standards and the benefits are well worth the effort. 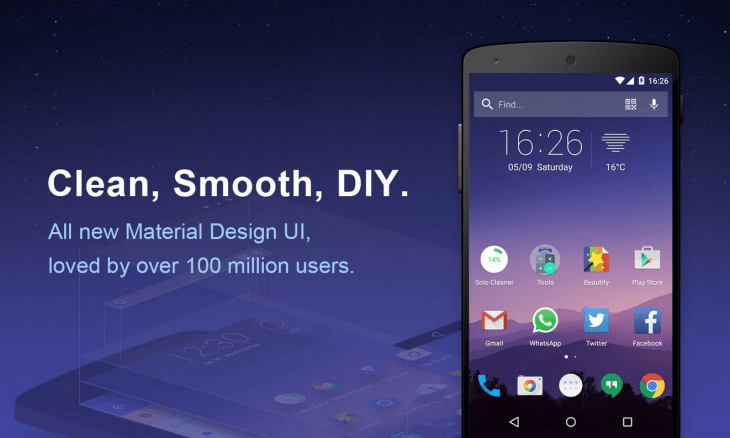 Solo Launcher is one of the lighter apps in its category – your phone won’t get a dramatic overhaul, but it does manage to keep your home screen neatly organized, as it learns what your favorite apps are, and places them on the home screen automatically.

It doesn’t skimp on themes and visual customization either. The Material Design app, offers literally thousands of themes to choose from plus it bundles a decent collection of widgets for a variety of purposes like search, cleanup, clock, weather and app lock among others.

Also, there are several gestures available, such as swiping up on the home screen to perform a search and one of the latest features added to Solo Launcher is the ability to search within your locally stored SMS messages.

Works on: Android 4.0 and newer versions 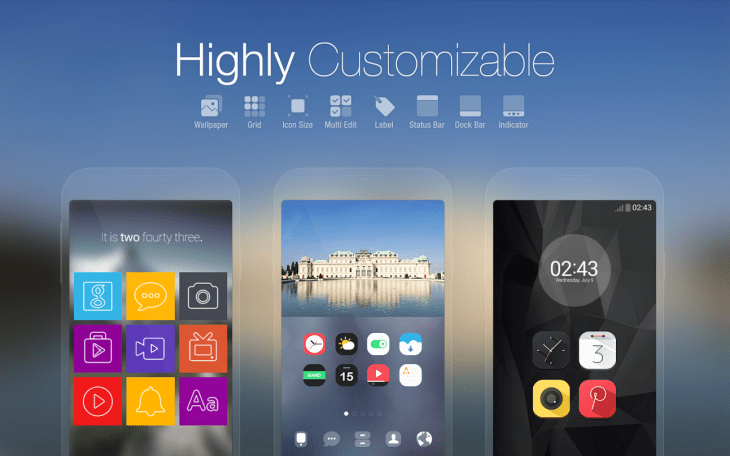 Altough this particular launcher doesn’t lack customization options, its default setup is quite functional on its own. Some of the most popular widgets such as Quick Settings and the RAM cleaner are placed on the home screen automatically.

Of course, you can tweak its appearance through the endless number of themes and color options, as well add your own shortcuts on the home screen, but at least dodol Launcher gives you a great starting point.

The app also comes with a handy Locker tool and a quick launch option in the notifications panel from where you can easily access your personal selection of apps. Last, but not least dodol Launcher is one of those resource-friendly apps and appreciated for how smooth it runs.

Works on: Android 4.0.3 and newer versions (some device models may be incompatible) 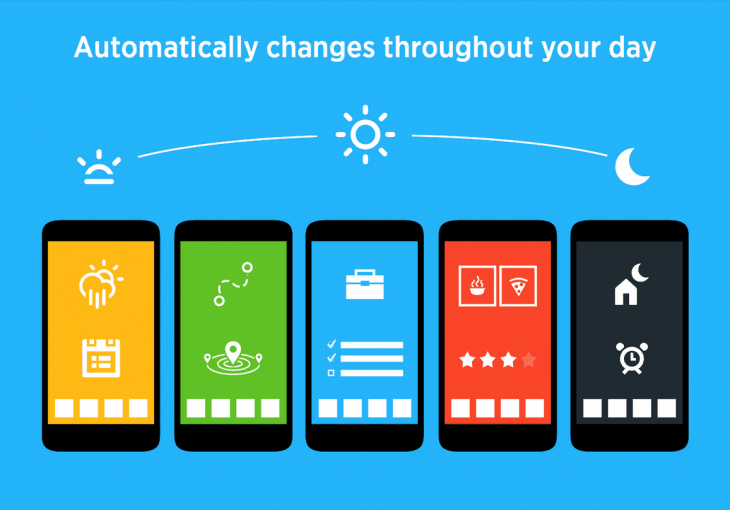 Aviate comes with an interesting concept – a dynamic app collection on your home screen that changes based on where you are and what you’re doing. For example, when you wake up, it can show you weather and traffic information and how long you’ve slept, plugin your hearphones and it offers music widgets and apps, and while you’re in the office, the home screen displays productivity tools you often rely on.

It’s certainly not the traditional launcher experience, but if you do decide to try it, give Aviate a few days – it gets better as it learns your habits. Aviate’s screens are beautiful and clean, and the launcher’s animations and transitions are smooth.

There is a catch though. Aviate is Yahoo’s app, as they purchased it at the beginning of 2014. Since they are offering it completely free, it was expected for the company to bundle some of its other apps and services into the launcher. So far, they only added Yahoo Search into the app, which displays on the home screen of devices running under Android 4.0 and higher. It looks similar to the stock Google search bar, with the exception that this one is powered by Yahoo Search.

Looking ahead, we will surely see Yahoo bundle more of its apps into Aviate, but if you can get past this minor inconvenience to get the launcher’s intelligent context-based experience, which is not easy to find in similar products.

Works on: Android 4.0 (recommended, older versions may be supported) and newer, Android 4.3 or newer (recommended for Samsung devices) 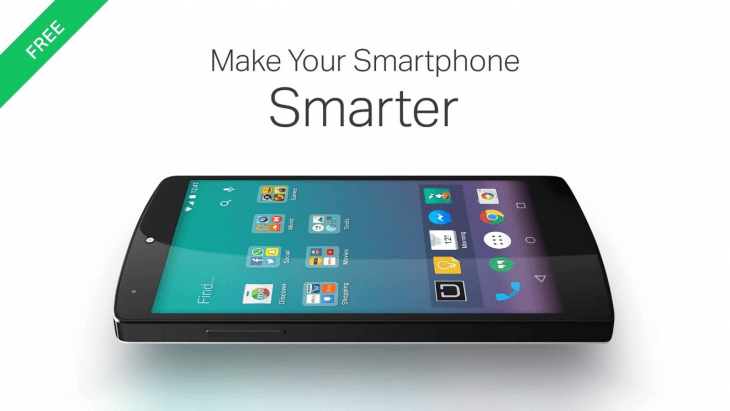 There aren’t many contextual launchers available (and even fewer are 100% free), but EverythingMe sits in the same category as Aviate. This app automatically sorts apps on your home screen based on usage, and into smart folders (also displayed on the home screen) based on their similarities.

A quick swipe to the left on your home screen will bring up the Quick Contacts Panel and the Prediction Bar – one of the app’s most unique features – offers a contextual collection of app shortcuts and bookmarks based on your location and time of day (this one is in fact, very similar to how Aviary cycles apps on the home screen).

The search tool also works intuitively and combines both local and online results – you might find interesting stuff you didn’t even think to look for. On top of that, you can customize a great deal of gestures, as well as manually edit your home screen and smart folders.

The list of features offered by EverythingMe doesn’t end here – this is a rather extensive launcher. Aviary is a fine contextual launcher that works well, although it doesn’t offer the degree of customization included by EverythingMe. If that’s what you’re looking for, you should definitely choose the latter.

Works on: Android 4.0 and higher 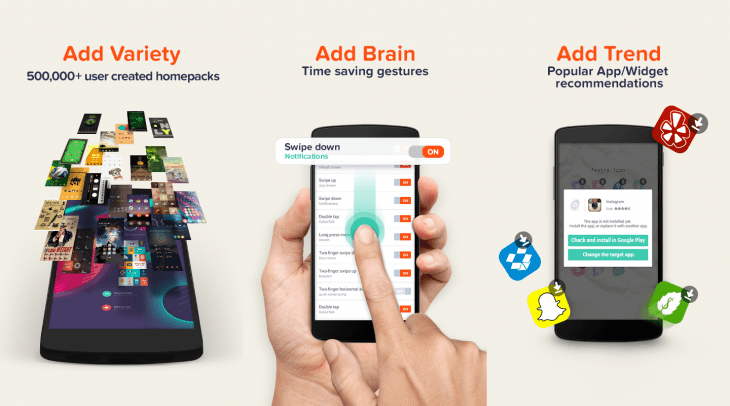 If you care more about the appearance a launcher is able to provide, you certainly won’t be disappointed by this one. Buzz Launcher doesn’t offer smart or intuitive features, but it does let you change the look of your device completely.

There’s an impressive number of community created themes and widgets but the launcher also includes a custom widget builder, for those who want to make their own. Buzz Launcher has a really simple menu from where you can access all of its options, and it enables users to create their own gestures.

In terms of visual customization, this launcher is hard to beat, as it lets you change almost everything: home screen icons and wallpapers, widgets, transitions…you name it.

Works on: Android 4.0.3 and newer versions 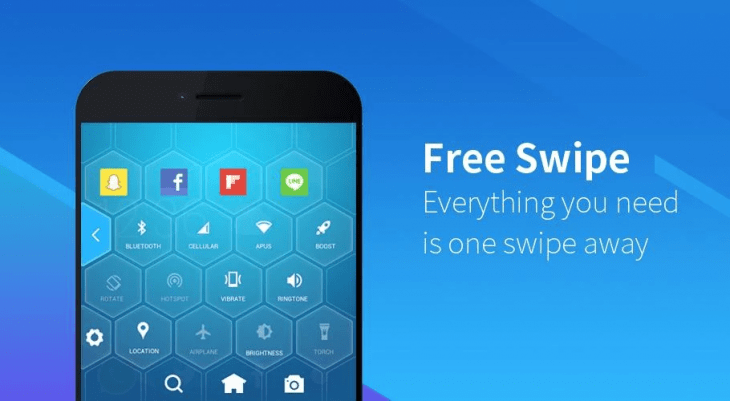 APUS Launcher is one of those lightweight launchers that are able to deliver quite the set of features in a really small package. Even if you have a powerful phone that can run more “bloated” launchers, you should still take a look at APUS.

The app includes those handy smart folders and automatically organizes apps on your home screen by usage or category. The search function offers automated suggestions, although that shouldn’t stop you from searching whatever you want.

A clever way, APUS devs are probably getting some revenue is the App Radar. This is a feature that’s supposed to show you what apps people in your area are using, in real-time. I suspect it has less to do with reality and more with sponsored apps, but you don’t have to use it unless you want to.

The launcher also lets you customize transitions, themes, icons, wallpapers and more of these items are added every month to the endlessly expanding collection. Regarding functionality, users can access a newsfeed, a list of recently used apps and system settings (called Free Swipe) and APUS also includes optional tools to clean up RAM and optimize battery usage. It’s not the most feature-packed launcher, but given the amount of options it bundles, APUS is snappy and goes easy on system resources. 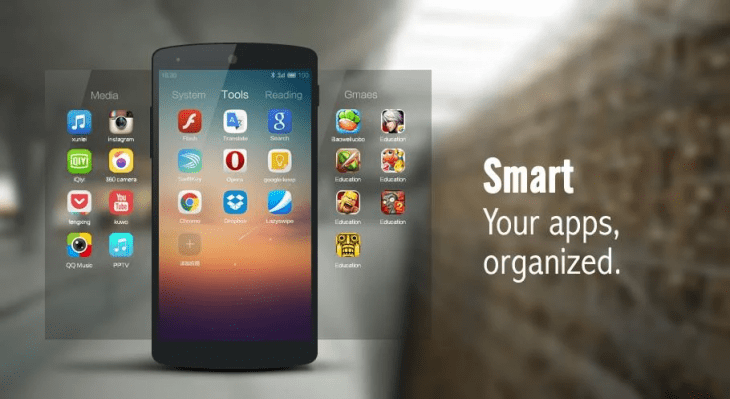 Another launcher in the “micro” collection as I like to call it, Hola Launcher manages to mix balanced amounts of smart and pretty so you won’t feel like you gave up on too much when coming from a more resource intensive launcher.

It has built-in search that’s just one swipe away and it offers a robust collection of themes, wallpapers and even fonts. Hola Shine is the equivalent of APUS’s Free Swipe tab where you can access frequently used apps and settings.

Furthermore, it delivers icon notifications on your home screen, and it also bundles Smart Folders and a screen lock function. Hola even has a privacy feature, giving you the option to hide apps you don’t want displayed on the home screen.

There’s more Hola Launcher has to offer, and looking at its complete list of features, it’s absolutely amazing how it manages to pack them all in such a lightweight app. If you want your phone running smoothly, you definitely have to give Hola a try.

Have we missed anything? What other ‘gems’ have you found among Android’s free launchers?