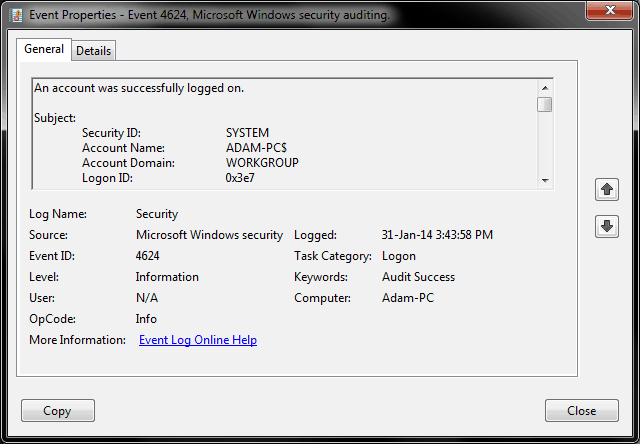 Modern translation tools are next to eliminating the need for professional human translator in the middle. When, not if, they advance a little further, mobile users will no longer be linguistically restricted in studying abroad, doing business with or dating other mobile users who speak a different language.

Yes, anyone speaking English can count on finding someone who speaks English, too, in a foreign country. Nonetheless, taking into account fast developing economies, middle and small businesses start looking towards China, Latin America, United Arab Emirates, or even Iceland. Whatever the reason why you need it, be it studying or working, you can’t learn a foreign language in a blink of an eye. Mobile translation apps are becoming truly advanced and powerful tools that can make a difference for you. Below is just a tip of the iceberg – apps that embrace many languages, while there is an interesting stratum of two-language translation apps that focus on a specific language pair. We will see to them later, but your suggestions and feedback are welcome. 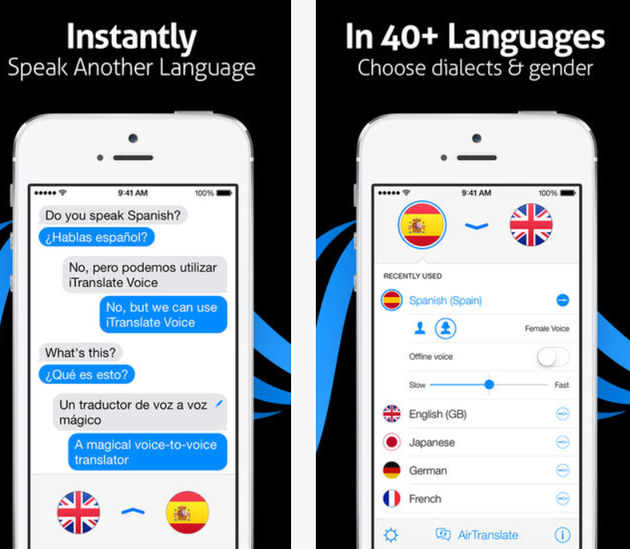 Half the features of this powerful app are available in free Android apps on the list, while other half is truly unique, and that’s what you’re paying for the $2.
Let’s start with the coolest features first. iTranslate captures your voice input, translates it into the target language and voices it out for you – a feature called voice-to-voice translation. If your counterpart also has an iPhone with iTranslate installed, you can connect the two devices via AirTranslate and converse freely without having to hand your device to each other – your original voice input gets translated and instantly sent over to your counterpart’s iPhone.

The app works with 42 languages, provides advanced word and phrase definitions, supports email, sms, Twitter and Facebook integration. High level of speech recognition accuracy lets you minimize traditional typing input. However, there is one restriction here – iTranslate requires Internet connection, while its awesome voice-to-voice over AirTranslate feature is only available when both parties have the app installed. 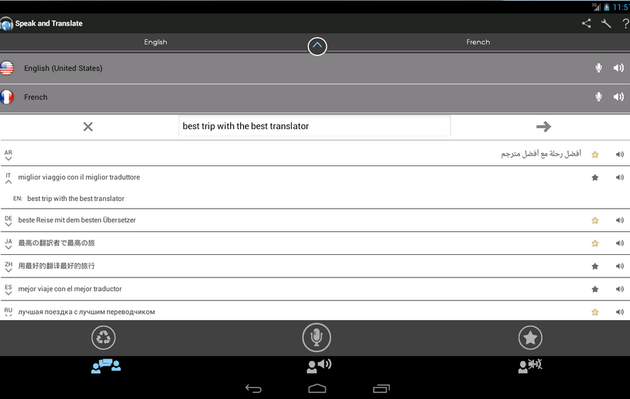 I suspect this app’s description for Google Play store was written with the help of this app since there is a certain mechanic touch to it, but don’t let it fool you. What you see is what you get, and if simultaneous machine translation quality provided by this app is this good – you are safe abroad, even when you can’t hire a guide or interpreter. There is another great advantage – the app detects the source language automatically, relying on Google or Microsoft services for actual translation. Hence, the quality.

As the name suggests, you speak and the app translates on the go voicing the translation, supporting 100 languages. It works both online and offline, so you can save some of the clichés and favorite phrases for offline use. It is also a great help for students learning a foreign language, since you can train correct pronunciation with it.

The app is without a doubt convenient for live conversations. It offers some handy filters, categories and favorites for your saved translations, so you can use them at any time. There are customizable widgets for fast access to various program modes, visual display of translated text, repeated voice playback, voice control support (no tapping buttons).

Free version limits users to Microsoft translation service only, and puts a limit on translation in ‘Language auto-recognition mode.’ Live dialogue mode is also limited to 5 trials, but you can re-enable it by closing and launching the app again. 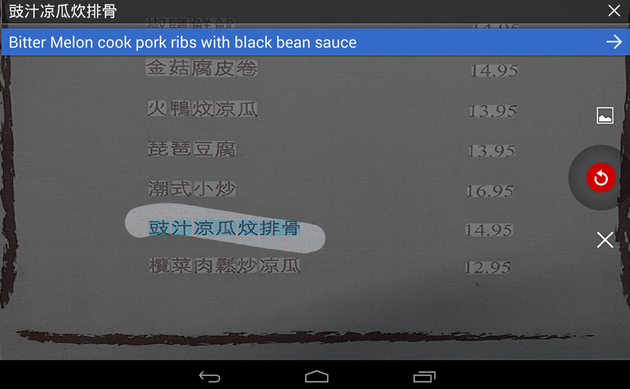 Google Translate doesn’t really need an introduction – it’s the golden standard for machine translation, which can only overcome itself when it becomes a Universal Translator from Star Trek. However, here is a brief outline of its features for the uninitiated. It supports to<->from translation between 80 languages, voice input and immediate translation, translation of printed text, typed text, hand-written text, text captured by your device’s camera.

Provided you download language pack in advance, you can use Google Translate in offline mode, save your translations in your Google Translate account, which would be the same as your Google account, and access them from other devices. No limitations, you can translate as much as you need, and if you should need a professional quality translation, the app will offer affiliated paid services.

Mind, though, that the camera input method works for Android 2.3 and above. 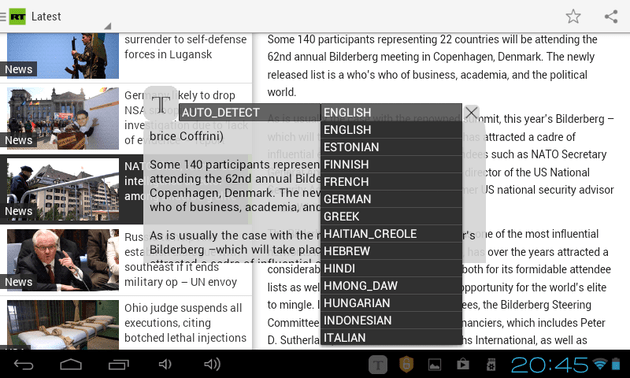 This app is a newcomer to Google Play store, and yet, it deserves considering since its features and ease of use make it one of the best choices for printed text translations. The app’s virtue is its ability to run in the background of any app you are currently working with, or to be more specific, above it. Once launched, Inapp Translator displays a floating icon above the main screen or any other launched app.

As a result, you can head straight to your newspaper, magazine, Facebook chat, SMS, or Twitter, email or WhatsApp and start translating text with a simple tap to select. The text gets translated in the same manner – above the pending app, so you can either discard it after reading, or copy-paste it in your email, or FB chat, or wherever you need it. Inapp Translator also works with ebook readers, and has a nifty share option.

The app is free, but has a premium edition for high-volume translations rated as 1000 emails or 10 pocket books. For a more detailed review of Inapp Translator, visit this page. 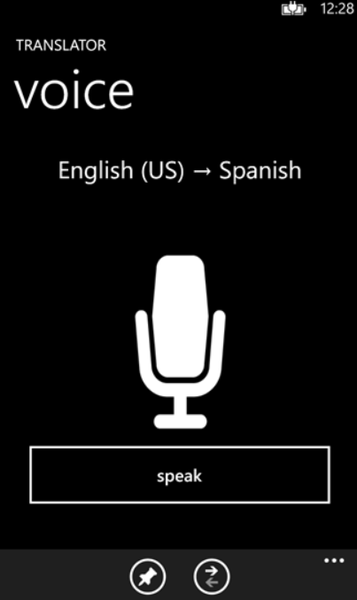 Bing Translator does nearly everything other apps on the list here do, but wraps it up in a single app – free, neat and powerful. You can input text for translation via keyboard or copy-pasting, voice input and camera, but the best feature is the app works in offline mode, provided you download the required language packs in advance.

As far as text translation is concerned, Bing Translator works with over 40 languages, whereas camera translation feature lets you instantly translate text on road signs, restaurant menus, printed media, you name it. Voice translation is also handy and advanced, but this feature requires Internet connection.

Another feature worth mentioning is Bing Translator will read the translated text with a native accent for you. 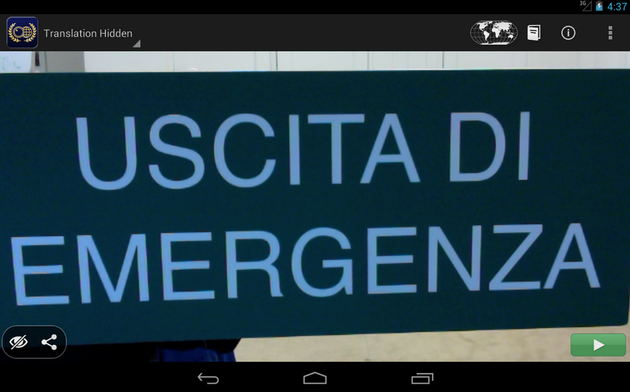 That’s a great app for travelers – point your camera at a restaurant menu, road sign or shop window, take a snap and launch Word Lens. Voilà! Now you can take informed decisions about ordering bull’s testicles or monkey’s brain for dinner, or sorting out that crutón is nothing more than a tiny piece of buttered garlic toast that can’t possibly be worth $15.

The app doesn’t require Internet connection to work, but its main limitation is the language pairs. Its main language is English, and you can use it to translate words and phrases to and from English, Spanish, Italian, German, Portuguese, Russian and French. However, you can’t translate German to Spanish, or any other language pair that excludes English. Also, each language pair is available as in-app purchase, so it’s not really free.

Word Lens does not recognize handwritten text or styled fonts and requires high quality images with good focus, so if your device’s camera doesn’t have a flashlight or zoom option, you may feel even more restricted to using this app in perfect lighting conditions. Nevertheless, it’s a fast, no-typing solution for travelers.

Shape of Things to Come

This wonder app is not ready yet, but if it delivers as great as promised, we might have the first real edition of Star Trek’s Universal Translation, with speech to text and audio live translation. It employs neural network-based speech recognition technology, so machine audio translations during a video conference might soon become reality. Translators and interpreters will soon experience the new normal, when technology leaves human professionals unemployed. However, we are very excited about this technology and hope to see it sooner rather than later.