Chances are you’ve stumbled into the Amazon App Store one or two times while messing around with your Android device. It’s also very likely you quickly exited the App Store application because it was so buggy you couldn’t even download a single app. As a result of this, Amazon has released a much improved version of the application – it improved so much they actually upped the version from 5 all the way to 7. Now, that’s Amazon saying it has made major improvements, but they were the ones who dished out that atrocious app prior to this one.

Let’s remember though, Amazon is still a multi-billion dollar company, so I’m sure they’re capable of hiring some competent application developers. In-fact, it seems as though that is exactly what they did, as the new version offers a brand new UI that offers a monumental increase in performance and accessibility. One of the biggest problems in the previous version of the Amazon App Store, was none other than the redundant scrolling that didn’t always work properly; and it was just a pain to use.

They made HUGE improvements, but they surprisingly still managed to leave behind some obvious flaws. One of these occurrences is the menu overflow button, it doesn’t really work that well with Android devices, and despite the major improvements to scrolling, there’s still times where you’ll get stuck. There’s also just some random lag throughout various aspects of the app, but it is rare enough to where I can’t complain too much about it. 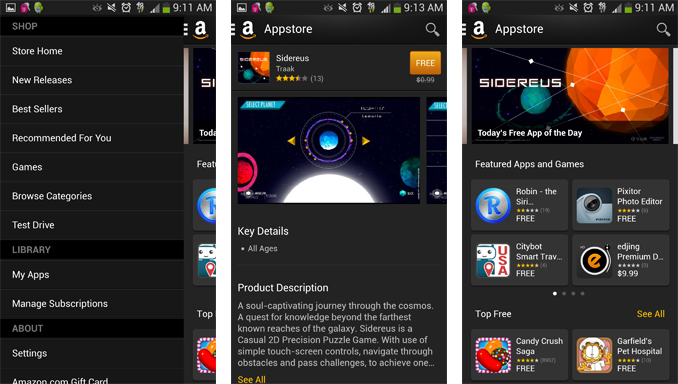 None of this changes the fact that the interface is still very sleek, and really has that Amazon feel. The home menu is split into three categories: Cloud, Device, and Updates. Essentially, the Cloud tab will display apps you have stored on the Cloud, Device shows apps stored on the Device, and Updates lists any Updates that are due. When you pull up the shop menu, you’re given a list of options to choose from such as Best Sellers, Recommended, New Releases, Browse Categories, etc. There’s enough options to bring you directly to what you want to see – or at least within a few more taps of the finger.

Once you get used to the navigation, you can jump between buying various apps and your current apps pretty seamlessly. Just tap the menu button on your Android device, tap one of your subscribed categories, grab an app, then go back to your apps via the menu button again. This process took a lot longer in the previous version, and it wasn’t so much lacking an intuitive design, it was just had a lot of lag that held it back from being a solid app store.

You can find instructions on how to get the Amazon App Store on your Android Device here, at Amazon’s website. Keep in mind you won’t find this on the Play Store, you have to follow the instructions within that link. As a little incentive, Amazon is offering a free paid app every day – unfortunately, no, you don’t get to pick the app, but it’s still a free one every day! 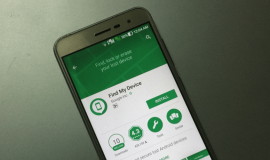