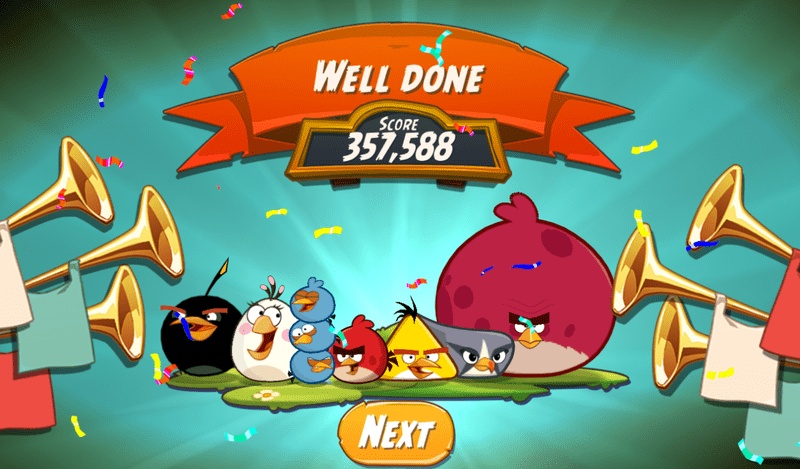 Before we get to the tips and a few small cheats for the Angry Birds 2, let me remind you that the entire appeal of this game, as much as any other arcade game is in trial and error. You play it, you fail it, you try again until you get it right.

However, some meticulous folks like to put stickers on their spice bottles, and compartmentalize their photos, as well as know their games in and out even before they start playing. If it rings a bell, this honest guide will help you enjoy the game without getting frustrated by Rovio’s approach to limiting players. Without further ado, here are our favorite tricks and cheats for Angry Birds 2.

Rovio’s most abominable move with the game was to infect it with the Candy Crush-like life system, so whenever you lose a level, or God forbid quit a level, you lose one life out of 5 available by default. As you know, one life takes whopping 30 minutes to restore, so 5 lives take 2 hrs 30 minutes. Ain’t nobody got time for that, so get your lives back, and if you are not determined to play with the Canadian devil, head over to your device’s settings and change the time manually.

First, stop the game – it’s most efficient when you go to Settings – Apps – choose the app and Force Stop it. Next, go to Settings → Date and time → un-tick the check box next to Automatic date & time → select set date/or set time depending on how close to midnight you are and fast-forward 2 hours and 30 minutes. Your five lives are back – ta-dam. This is particularly helpful when you play offline and video  ads are unavailable. Don’t forget to switch back to the automatic date and time when you are done playing. Otherwise, your schedule and notifications will be messed up. 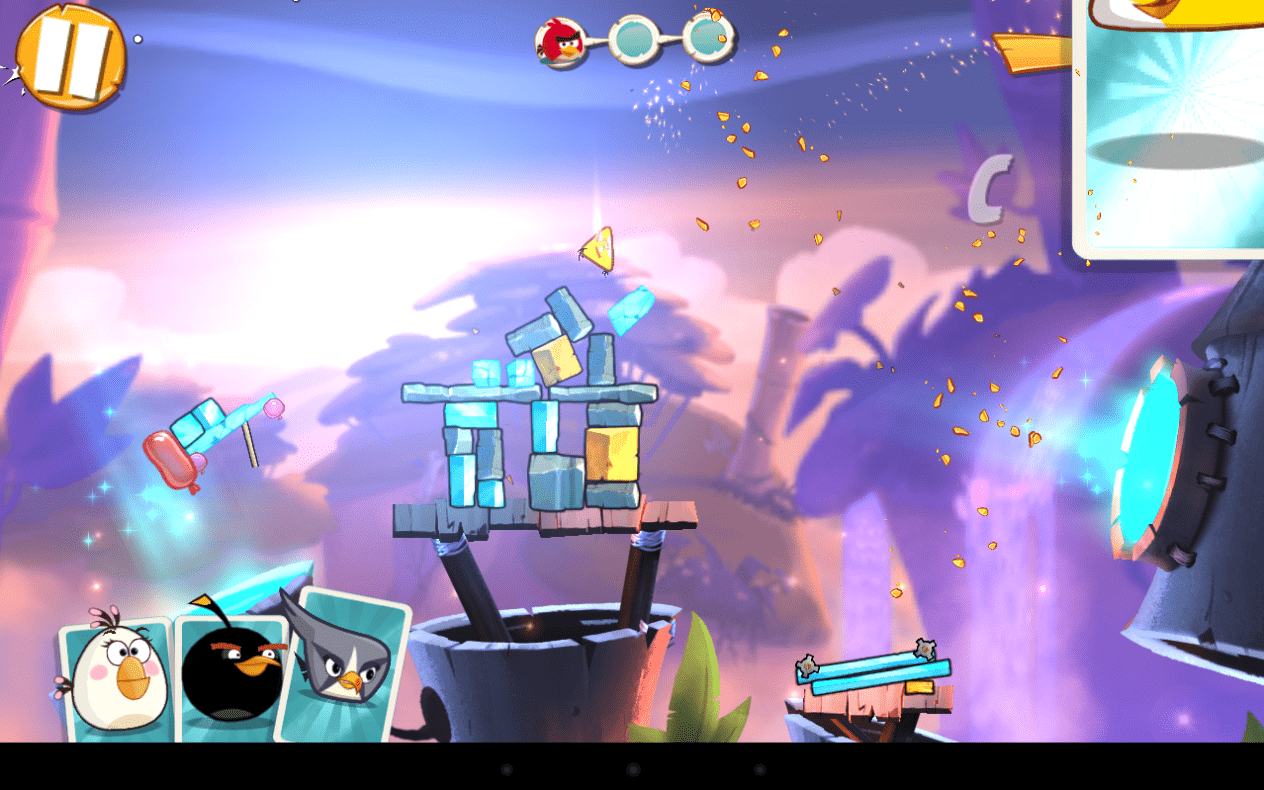 #2. Rub a hole in that Clash of Clans ad

If you don’t feel like mingling with time, you can always get an extra life or a missing card by watching a video ad. Sometimes, you can exhaust even Rovio’s stock of video ad offers, so if you are missing that ad right now, you can close the app and re-start it – the ad offers will be back in place.

Log in daily to get the gem bonus and make sure to watch an ad to make it double. Since it’s only 6 gems a day, provided you watch that ad, don’t waste the gems on lives when you lose a level. The time trick does not work on the daily bonuses, so spend the gems on spells wisely.

Note that the spells have different value and different effects, so know them before you buy them and use them in the hardest levels only. Mind you, the spells don’t work in the boss levels. 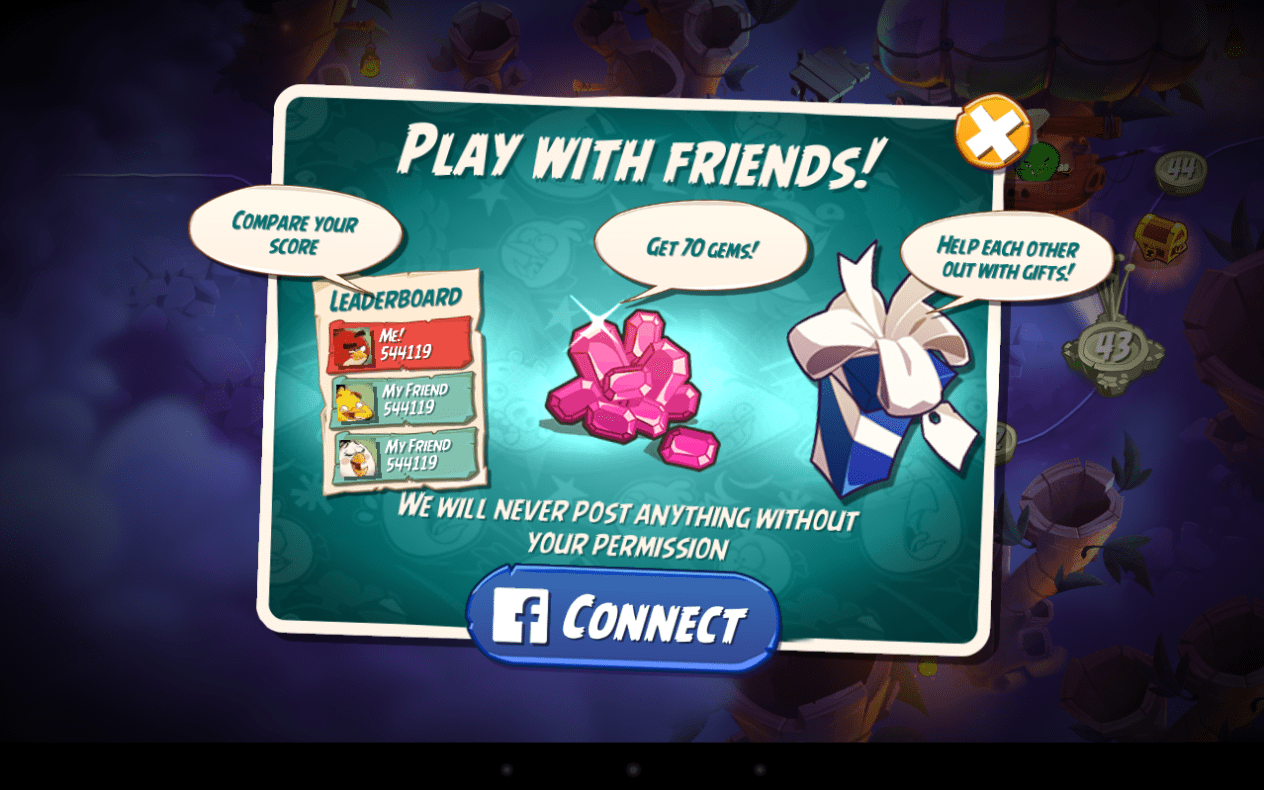 There are 5 spells, and they get unlocked gradually as you proceed.

The last one is yet to be unlocked, so we will update the guide. 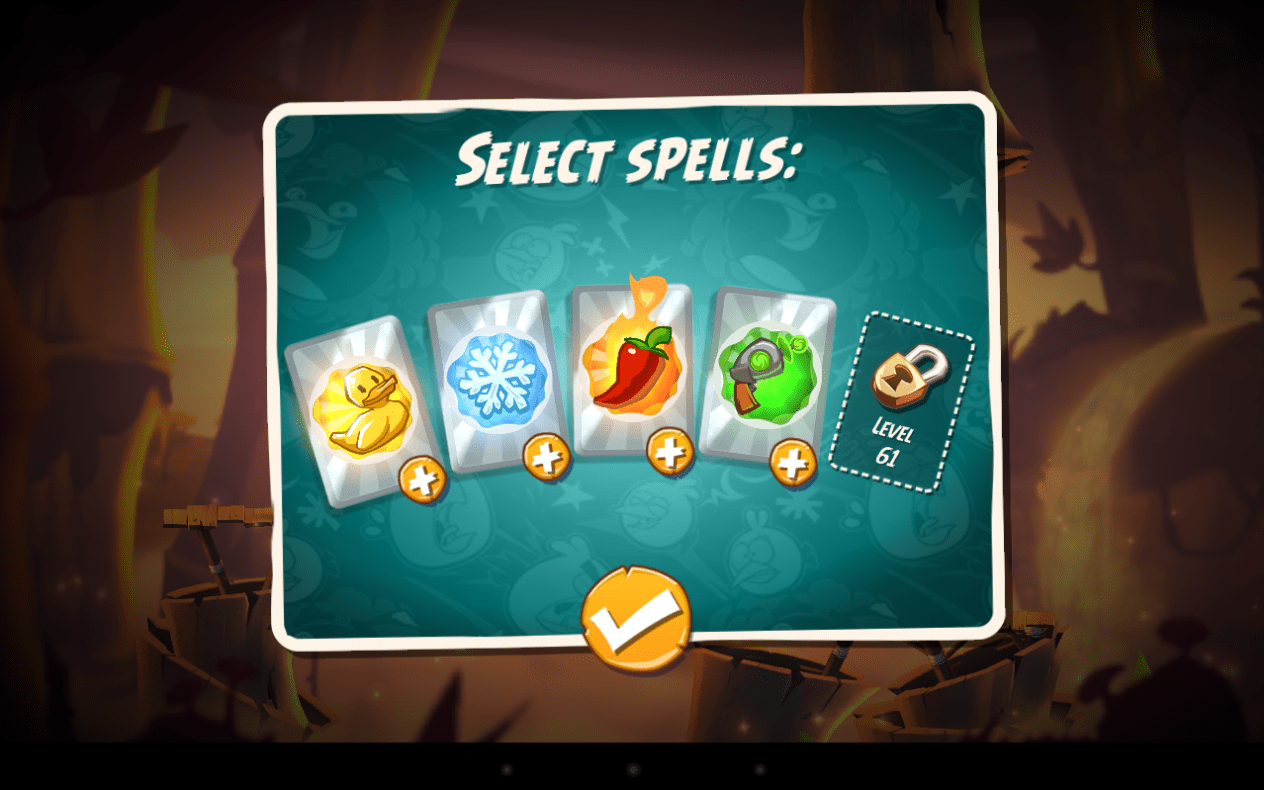 With Angry Birds, we were used to restarting the moment we knew the first move was bad. It’s of no use in the second release because:

Besides, with a video ad and the extra card it grants you, you can always finish them piggies with a decisive final blast. 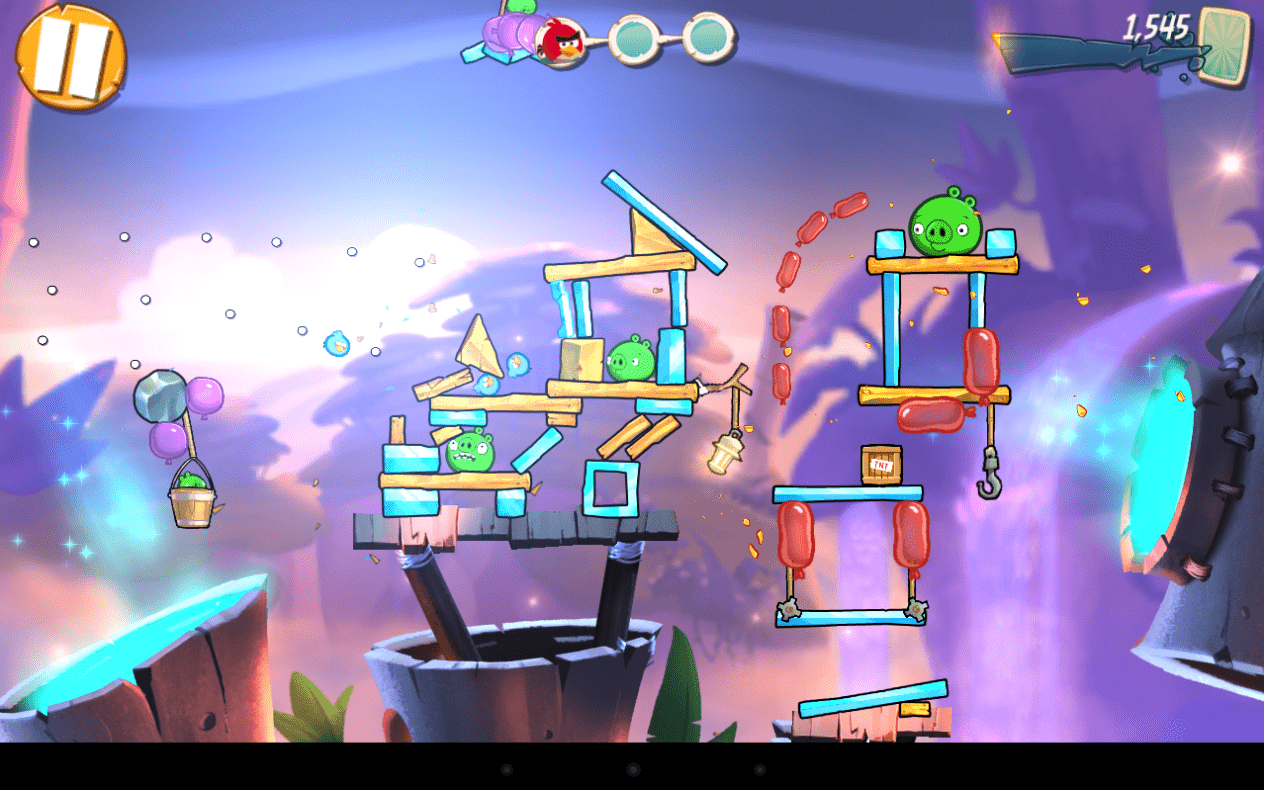 You unlock the birds as you play, and instead the predetermined set of birds per level we had in Angry Birds, AB 2 lets you use all your cards in a level. Remember the level consists of several rooms, so it’s wise to sort through the birds and choose the adequate ones.

The good part is even if you started aiming, you can slowly put the bird down – it won’t shoot, and choose a different birdie.

Here is a short breakdown of their abilities: 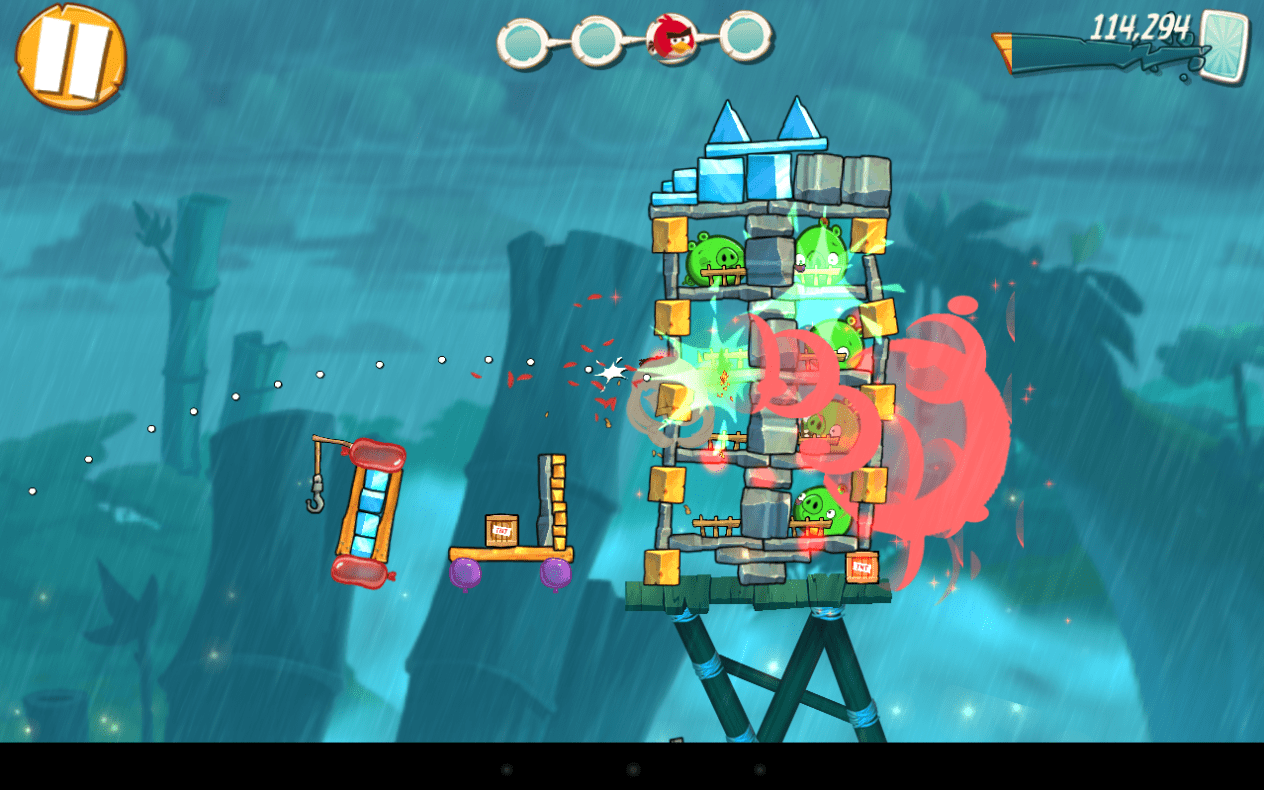 #7. Be Cool, Stay Patient and Use The Environment

This is especially true with the levels past 25 when the areas become populated by all sorts of contraptions. At some point they may seem like they are on your way, but in fact, they may be used in your favor.

Thus, when you fire that bird, try to use the elements of the environment to your advantage and wait. A flower may get hit and start spitting bombs; a wooden chunk may get sucked by a vent and ricochet against a far-away structure and you won’t need to spend another bird on it. Whenever you see a rocket in the area, make sure to hit that – it’s a spectacular blast. Just let the physics work its magic and wait till all the blasted elements fall and finish the job. 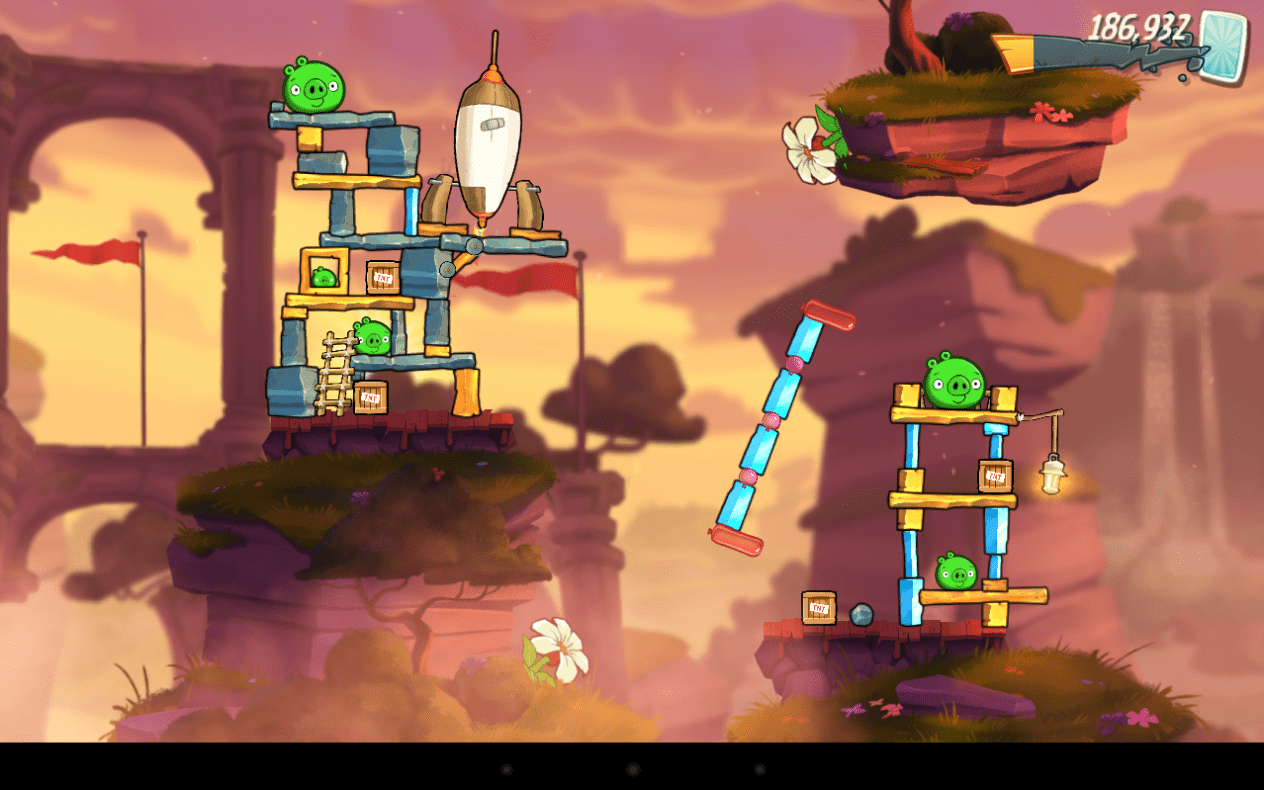 Sometimes aiming a particularly well-hidden bird seems logical, but you can try aiming at a weak spot in the structure that would send it all to crumble. This is especially true for boss fights, when the boss remains alive and very well even after a targeted attack. The darn pig can just roll over or fall to the structure below it, and still be there. But if you destroy them all, and it falls to its untimely death – you are the winner. 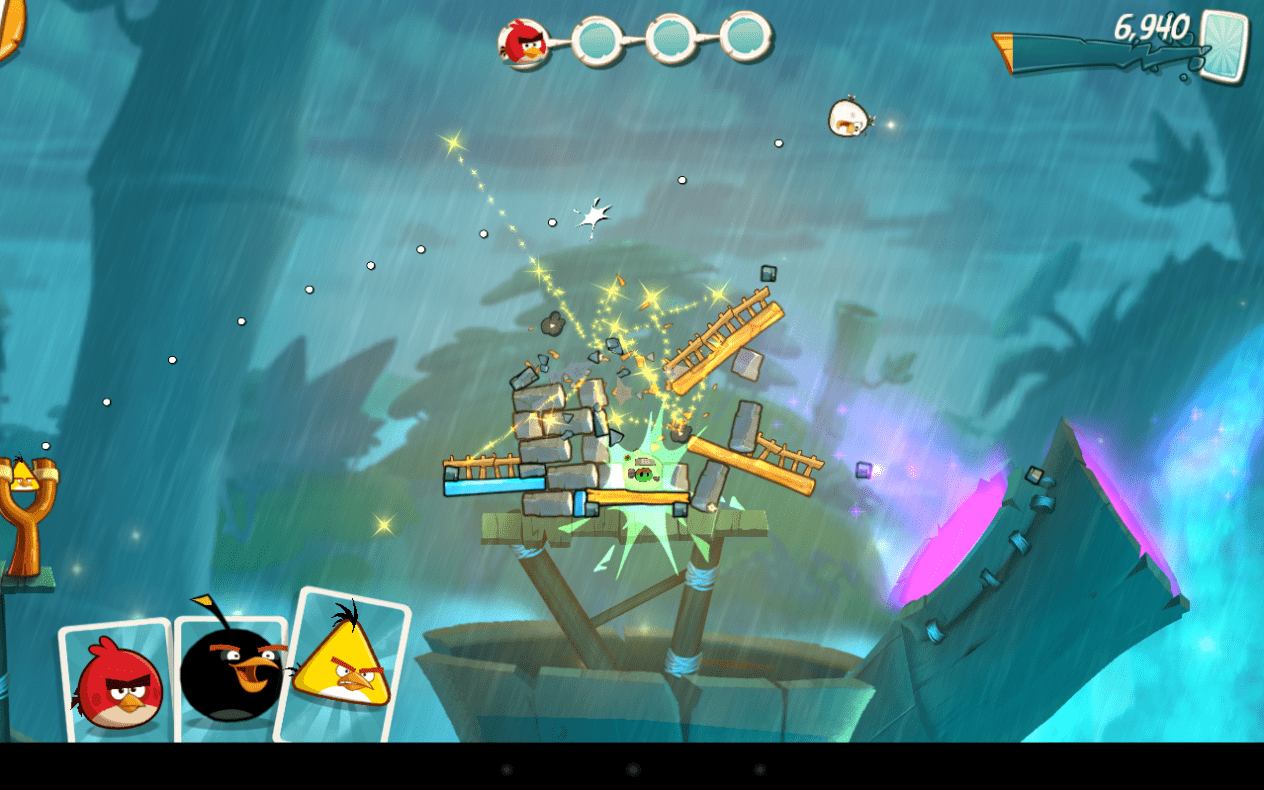 The game has so-called quests for you – the tasks that you complete without even bothering to read the quest info, but it’s useful to check them out once in a while and collect the gems. To collect rewards for completing quests, tap on the menu icon when on the map and pull out the daily quests – if you have rewards pending collection, tap those. If not, see what else you can do to earn those. Normally, it would be something like connect to Facebook, send a gift to a friend, or play the Arena fight, or collect 10 stars. 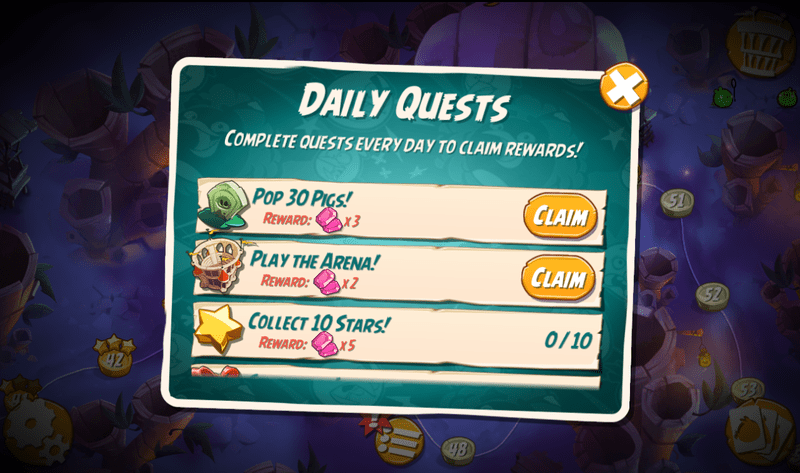 Do not ignore the gorgeous Arena challenges, by the way. It’s a great way to extend the gameplay when you are out of lives on the main map because you enter the Arena if you have a ticket. And you have one free ticket per 2 or 3 hours, plus you can watch an ad to get one extra for free.

Arena consists of leagues, and you go from one league to another only when you upgrade your birds to the next league. You might have been wondering how to upgrade the birds here – you do so by simply playing the Arena challenges and scoring a place that wins you feathers. Each challenge has a specific reward – feathers for one of your birds, so play those daily Arena challenges to upgrade your flock. The process won’t be fast, so be patient. 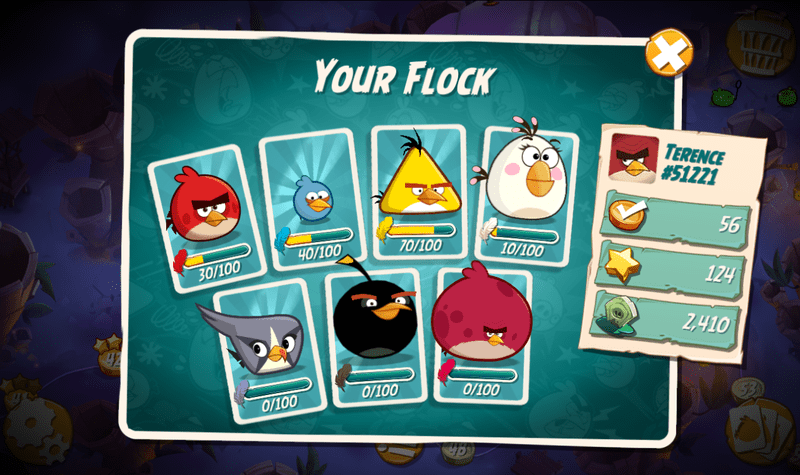 #11. Watch out for the special pigs

At later stages, you will find that some piggies have special abilities, like firing cannons and casting magic spells that null and void your birds’ powers. Don’t attack them. Instead, destroy the structures around or beneath them to neutralize the threat.

Finally, Rovio has gone to great lengths to make this game as much entertaining and addicting as it is annoying in its life system and ads. However, we strongly suggest you refrain from downloading any hack tools – they may contain harmful code that will compromise your privacy and security. Speaking of which, PocketMeta has a nice selection of security guides, and we strongly recommend you read about Stagefright.

What are your personal tips and cheats for Angry Birds 2? Share them with our readers in the comments below or join a conversation on our forums. Don’t forget to like and follow PocketMeta on Facebook, Twitter, Pinterest and Google+ to receive our hand-picked apps & games reviews, productivity and security guides for Android, iOS and Windows Phone.