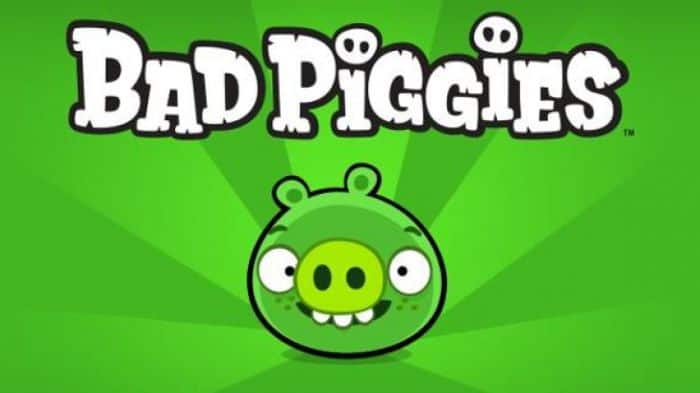 The first time I saw my girlfriend playing Angry Birds, I thought she was kind of infantile. I resisted for about a week, but gave up when she begged me to help her pass a difficult level, and the next thing I knew I was installing the latest version on my Samsung. I got hooked without even realizing it, not to mention the younger generations of our families. Tablets and smartphones turned out into #1 pacifiers for kids and teenagers, with Angry Birds being the first in demand.

The latest Rovio games feature the same birds and pigs we all love, but different challenges and new neighborhoods. While I personally oppose Angry Birds GO for the abuse of in-app purchase prompts, which are very annoying, Bad Piggies, on the other hand, turned out to be hilarious, challenging and quite as mind-boggling as Angry Birds are. Let us take a closer look at the two games.

Angry Birds change the scenery and get behind the wheel of racing cars in this colorful and fun racer. The game is action-packed, yet, very simple – birds drive and fly across the track, competing for the first place. The more you race, the more cars you unlock and the more unlockable upgrades you can sport on your vehicles.

Every level consists of one track with different obstacles, such as fruit smasher, time trial race, and a boss race you have to win three times. When you complete the boss race successfully, you unlock a new bird to go over the new track and compete for the first place. That is it for the gameplay. 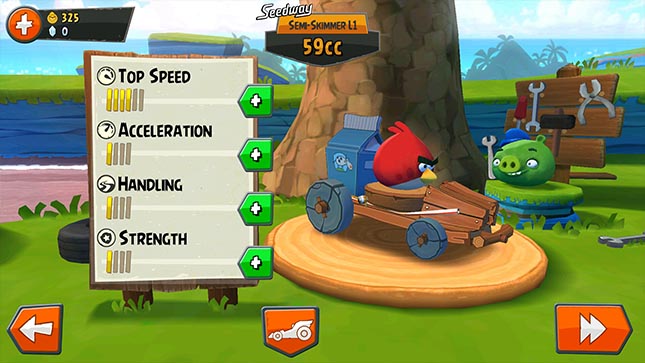 Besides the race, there are many car upgrades, tracks, coins and other cool stuff you can get via in-app purchases. In fact, this is one major Con of Angry Birds GO – in-app purchases are everywhere, and at times they make you want to quit the game. After a couple of races, your birds get suddenly tired and need a rest, unless you want to play to make them jolly again. Unlockable cars are right next to the buy-only cars, so kids are sure to click on those whenever they want an upgrade.

Besides, cars and tools, there are nifty tools like State Farm Mechanic and other sponsored power-ups. In addition, the app is integrated with Facebook, so you can display your game scores and compare them to those of your friends. 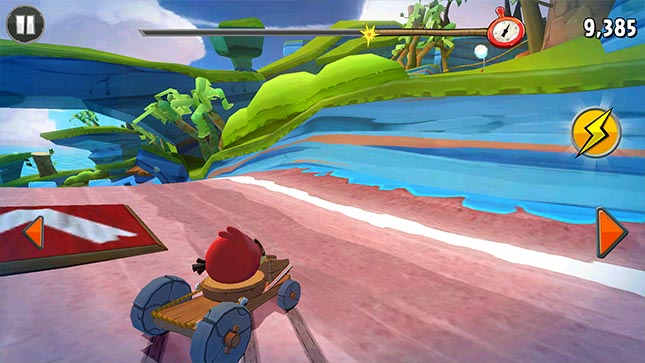 The controls in Angry Birds GO are very simple: tilt to steer and use on-screen controls to drive and power up, which is free for the first time you use it.

Easy controls make it a perfect time killer for audiences of all ages, and simple enough for the youngest gamers.

The race is fun, and the favorite characters are hilarious, as usual.

One undisputable advantage is you can play and beat the game without making any in-app purchase at all. You just have to have the patience to wait till your birds rest and re-fill their energy tanks, so you can win the game without spending a dollar. Just make sure your credit card information is not on the tablet your kids play. 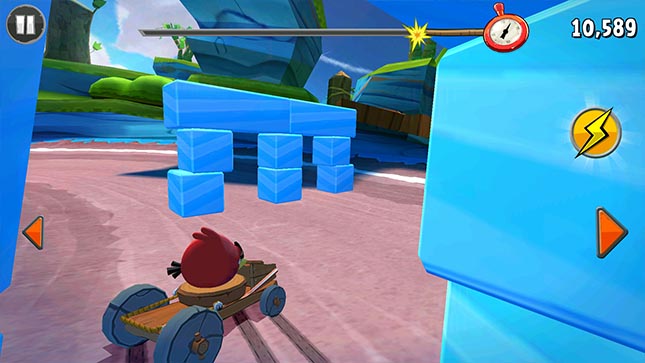 As I already mentioned, in-app purchases are annoying and sometimes utterly ridiculous. For example, Rovio wants $50 for a couple of buy-only vehicles that are only slightly different from the unlockable cars you get as you win the races. The buy this and buy that nagging gets often annoying, literally after each race you get a prompt to buy a permanent upgrade.

Having to wait for your birds to get some rest is a lame attempt at making users pay. Rovio needs to spend some money on consumer behavior studies to integrate the in-app purchases in a more user-friendly and ethical manner.

Some people will just pass by without even bothering to try this game out just because of the user feedback complaining about the in-app purchases. However, if you give this fun racer a try and, maybe, disable WiFi as your kids play, you are sure to get lots of fun racing with your favorite game characters.

Now, this one is definitely my next favorite after the Angry Birds Space. Have you ever felt sympathetic with the pigs? Well, if you have, this one is just for you. It is all about piggies driving ridiculous and sometimes very complex vehicles to get to the egg or the map to the eggs. From time to time, there will be an occasional sleeping bird to watch over eggs, but the game is mostly about the pigs. They make funny noises and faces, they grin and yell as they get scared, they laugh as they succeed and are overall very adorable creatures.

You get a set of tools to build a vehicle, and each level has more tools: different size wheels, engines, propellers and fans, balloons, sticky wheels, airplane parts, explosives and Molotov’s cocktail to boost the vehicle at the right moment.

There is a manual with hints and instructions, but it gets pretty difficult to make sense of it as you proceed to the more difficult levels and more complicated vehicles.

As piggies drive, they collect muffins, cakes and dumplings to feed the Prince piggy, who gets fat and then releases gas with a loud noise.

The trick is to activate and de-activate different components of the vehicle to drive or fly through the track without devastating the vehicle and losing the piggy. The poor creatures make funny noises as it gets scared, or rejoices to have finished the race. You can also buy help from the Mechanic. 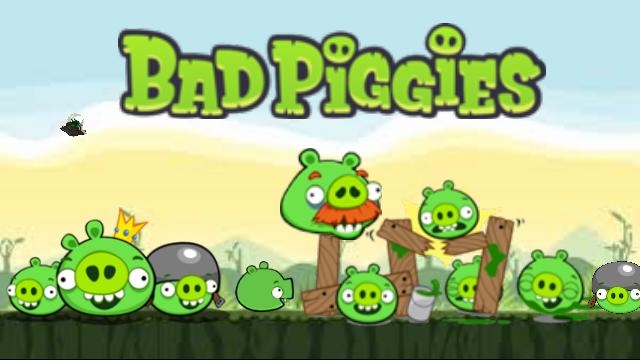 The game is fun and colorful, and pathologically addictive, especially for the young fans of the Angry Birds. The piggies are hilarious and never get tired of falling, exploding and failing until they succeed. Their persistence deserves respect.

You can play and beat the game without spending a dollar on the in-app purchases, and the latter are not as obnoxious as in the AB GO. 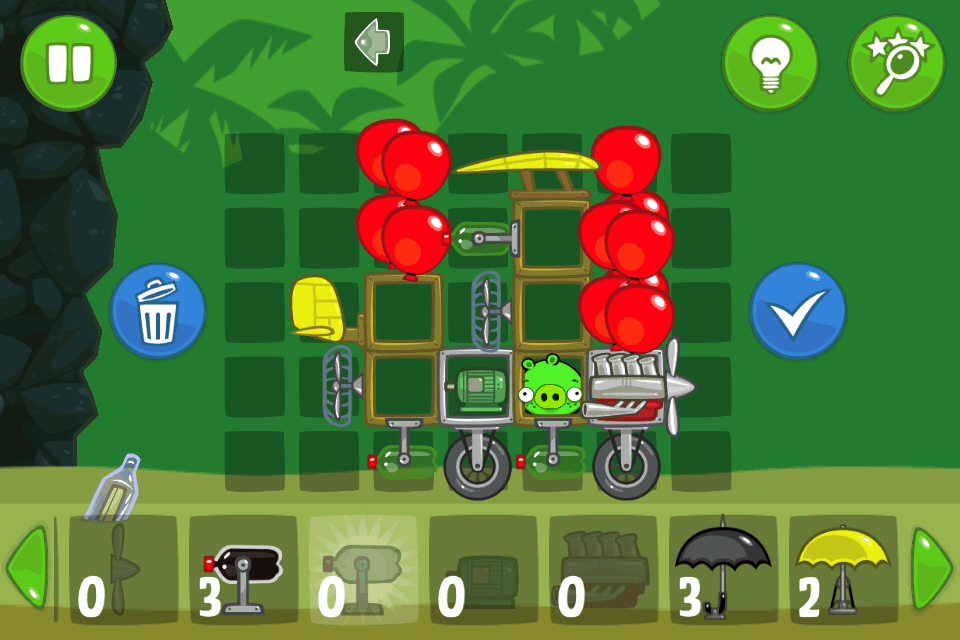 The manual which explains how you should build complicated vehicles gets difficult to grasp as you proceed with the game. It is one thing if you need to build a 6 component vehicle, and totally different with a 24 piece mobile. Nevertheless, it makes your brain move.

The sceneries are sort of dull here, with a little strip of green grass across the track and the rocky mountain all around, so not much to praise here. Overall, higher levels get a bit difficult, but still possible to handle. 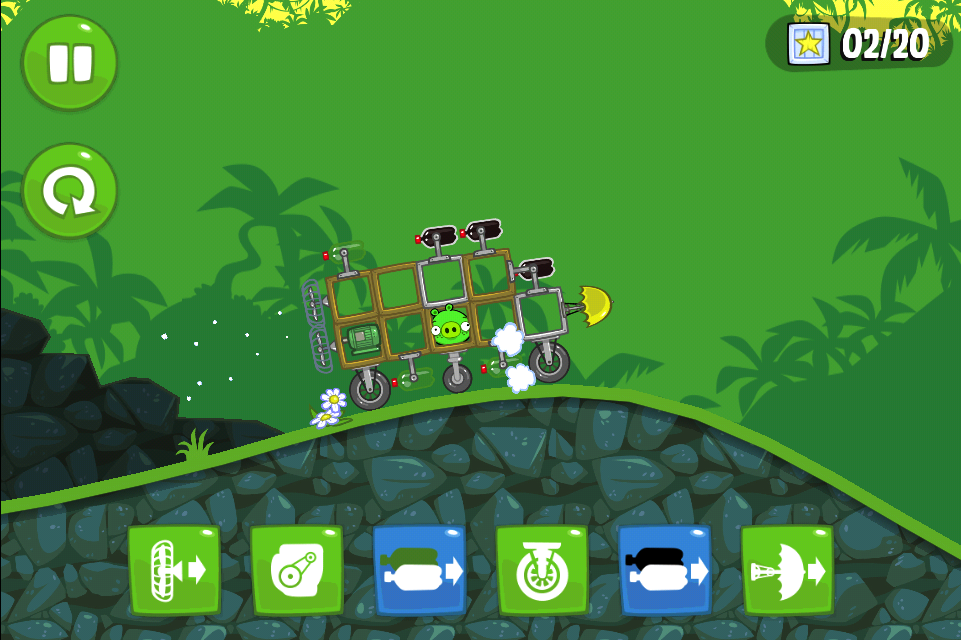 Bad Piggies are fun and addictive, with challenging tasks and rewarding goodies as you build ridiculously looking constructions on the wheels and shoot them off from a rocky mountain to get to the finish line. Kids will love it, but parents beware – there will come a point where your help may be needed, so keep your shields on not to get addicted, too!