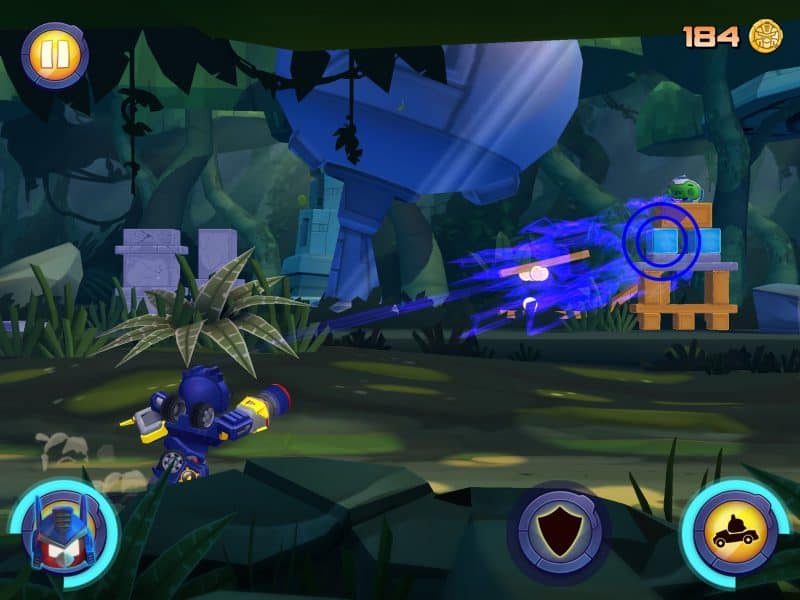 Looking for some help with the latest Angry Birds spin-off, Angry Birds: Transformers? Whether you’re struggling to score enough coins, maximize efficiency, or just make it through a certain level — we’ve got a few tips that will definitely help improve your skills. If you haven’t, make sure you check out our full review of the game first!

This is the most simple thing you can do, and also, by far the most important. Almost every time you complete a level, there will be an option to watch a short advertisement to double your rewards. The ad is usually about 15 seconds, and afterwards you are immediately rewarded with twice as many coins and pigs. Unfortunately, you might run out of ads eventually, but they will come back after some time. It’s usually just an advertisement for some other Angry Birds game, so definitely tolerable. 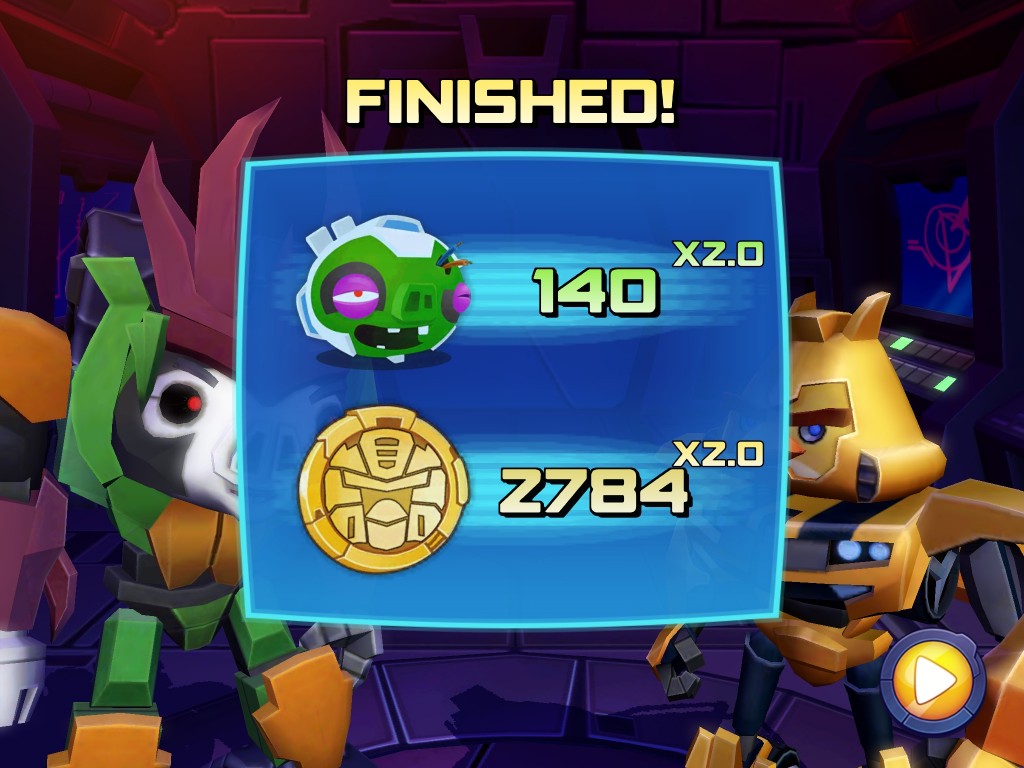 If you plan on playing a lot within a 24 hour period, you may want to only watch ads after you scored a high amount of coins or pigs. Since it can become unavailable, its a good idea not to waste it on doubling 250 coins.

I’ve seen a few people simply target the pigs throughout every level, and not worry about anything else. Sure, it’s a good idea to wipe out all the pigs so you can unlock characters, but you’re missing out on a lot of coins if you don’t blow up everything possible. Any structure you destroy adds to your coin total, so you want to ensure you’re firing at something at all time — unless of course there isn’t anything on the screen. As you can see from the screenshot above, you can earn a lot of coins by combining these first two tips.

As you progress in the game you should notice several small chests that appear on the world map, you can tap on these to get a few extra gems. Make sure you’re always keeping an eye out for these because they can appear randomly — not just when you explore a new area. Coupled with the gems you receive for completing various achievements, this provides you with a nice income of IAP currency for free.

Tip #4 – Use your abilities and friends

When you level up your characters, they will start to unlock abilities. Some of them are re-used for other characters, but still equally effective. You can only use an ability if you destroy one of the background structures, after that, a small cube flies towards you and charges up your ability to use it. Although these abilities are useful, calling in a friend is much more useful. 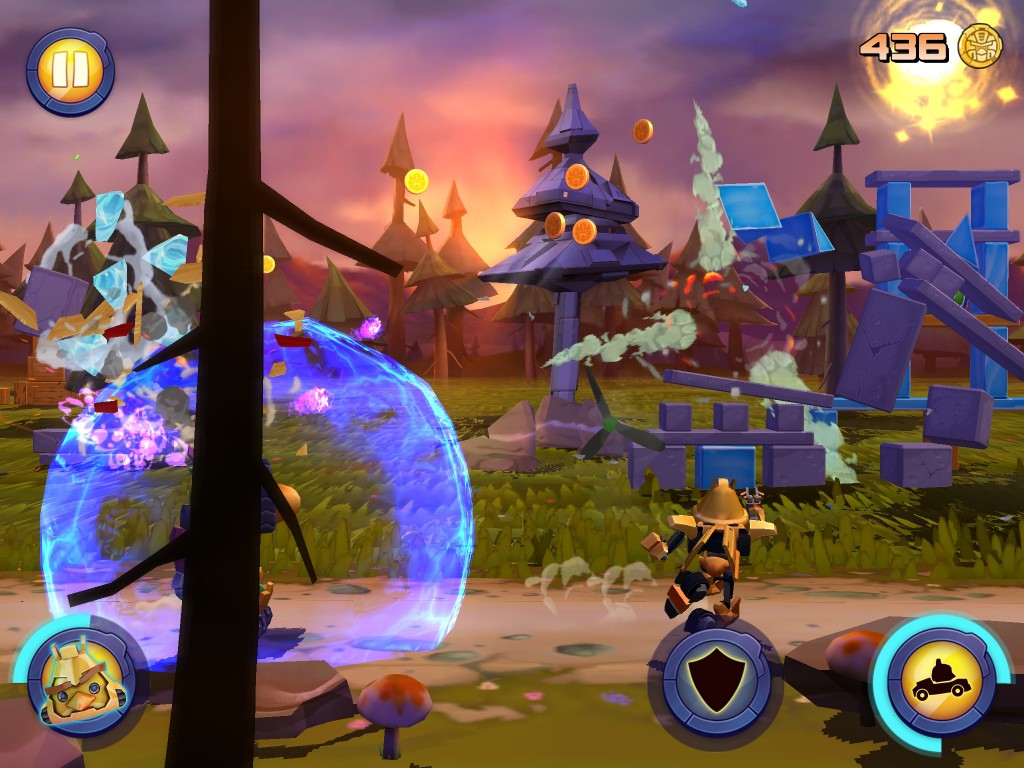 If you are ever in a spot where you’re going to miss blowing up a bunch of objects, quickly call in your friend to destroy it all. Try to use this advantage early on, so it has time to recharge and you can use it again before the end of the level. The most important time you can call for help, is if there is a gold coin box that you don’t think you’ll be able to get, since they are one of the most rewarding things to destroy.

Since you get quite a few gems between the treasure chests and completed achievements, it may seem like you can spend them freely. That’s not really the case, because the gem costs for certain things are pretty high by comparison. For the most part, all these gems can really do is speed up wait times, unless you use them to upgrade a character completely. Although it can be costly, doing a full upgrade with gems is the best use of this currency — since it saves you both time and coins.

Alternatively, speeding up the wait time to play a level can be useful, since then you are able to earn coins and pigs a bit quicker. Spending gems to speed up a character upgrade is probably the least efficient way to use them.

Here’s another very simple tip, and it’s something that you might already be doing. You’ve surely noticed that after completing a level for the first time, that node on the map begins to accumulate coins. One thing you should always make sure to do is collect the coins from all of these nodes prior to shutting the game off — even if they haven’t reached the maximum capacity of 400. 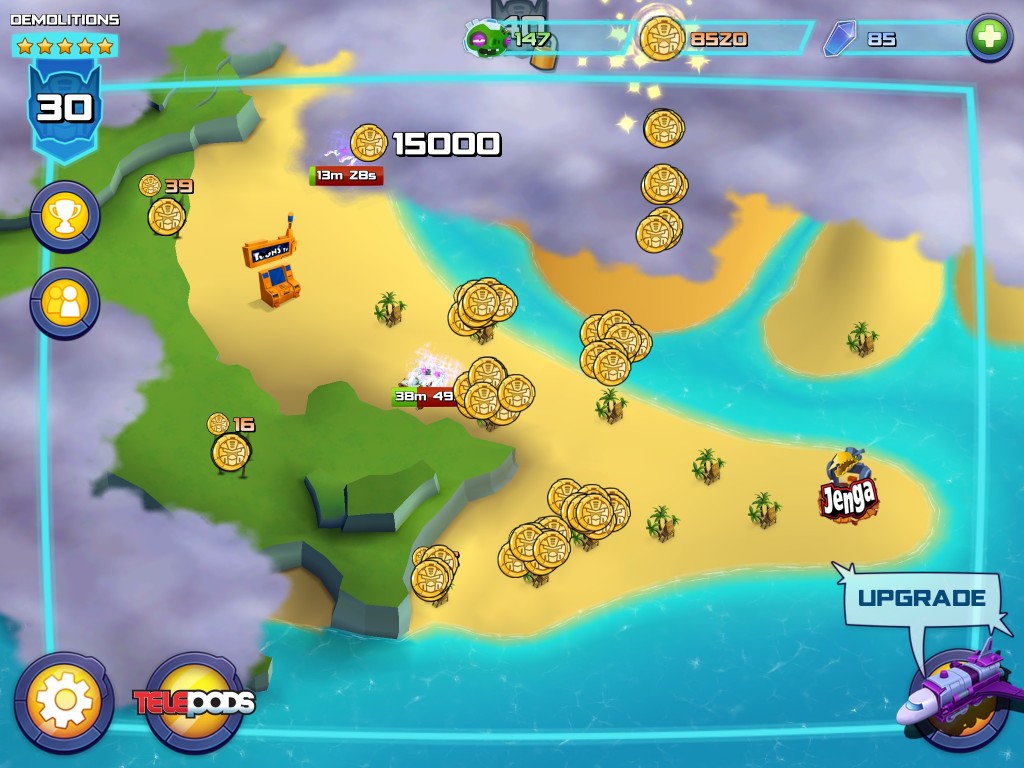 If you can, try to check back regularly to collect coins since they can max out, and if they do, you won’t be earning passively.

Rather than just aiming for a pig on top of a stack of blocks, glass, and stone — you should aim for the root of that tower so you can take out all of the blocks as well as the pig. Always aim for glass first, as that is the easiest to break, followed by wood, and only shoot at stone if there is nothing else around. TNT boxes should be the #1 priority, as these will almost always destroy an entire tower.

That does it for our tips and tricks for Angry Birds: Transformers! Hopefully you were able to learn a thing or two, and you can take that and use it to your advantage the next time you play the game.