Here is a short list of apps that might come handy in most inconvenient situations when you have to confront the police or when you want to avoid that confrontation, which is always better. Let us not focus on why you may want to do so. Sometimes, you just want to drive safely avoiding check points. On other occasions, you know you might be checked, especially if you are not white and well-off. Police brutality is no secret to anyone, so Americans are arming themselves with law knowledge and smartphones to be able to record proof, ask community for help or check laws and cases and avoid that traffic fine before it’s even issued.

We have recently covered streaming apps, and most of them let you stream, or record and upload the video to a cloud storage, so you may want to check that list of apps, too. On the other hand, live streaming police misconduct may not be the best idea, and can potentially cause you even more trouble. That’s why you may want to arm yourself with an app that lets you record silently, in the background. 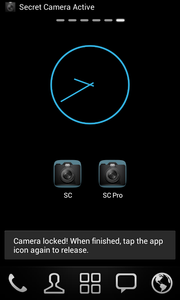 Do yourself a favor – don’t use this app to spy on someone you love, and then maybe luck will favor you and let you record police brutality in stealth mode, and use it for a greater good. Secret Camera lets you take photos when your smartphone screen is turned off. All you do is press the volume keys, and the camera will capture images silently, without the shatter sound. It also sports an auto-click feature for continuous capturing, and works with both front and back cameras. The app has extensive configuration options to mute shutter sound. Additionally, it has a discreet icon and app name, which does not arouse suspicion. It is light on your device’s battery life and can be used to take pictures secretly, when people around you don’t suspect what you are doing. 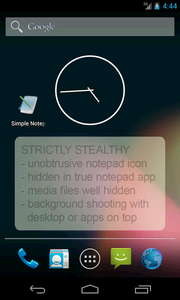 This app lets you do both – take pictures and record video in stealth mode. It does not serve ads, it has a discreet inconspicuous app icon and name, and it does not show on your Recent Apps list. The app supports all Android OS versions from 1.1 to 4.x, front and back cameras with quality settings for each. It enables 1080p/720p video recording. It does not show a preview; it does not make a shutter sound; it does not use flash. You can use it in burst mode for up to 10 images per second fast shooting. The video recording feature is available via in-app purchases as an advanced feature, and lets you record videos of unlimited length, auto-split the file into multiple files if needed, and set timer for recording, among other things. The advanced features also let you block incoming calls and messages while the recording is in the process, and turn off system navigation and button lights, so that your device looks turned off.

You can also enable background shooting, which lets you shoot and have your device’s screen look normal. You can run other apps, put the device in standby mode and still continue shooting. Quick Quit mode lets you stop the app in one tap while file protection hides the images and video from Android Gallery and file managers. Another advanced feature is self-destruction, which erases all files taken by the app quickly, in a single tap. 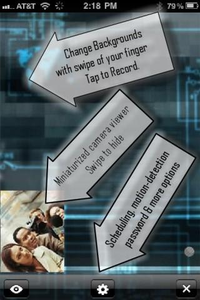 This iOS app guarantees discretion while recording proof in stealth mode. You can capture a police officer or a nanny behaving in improper manner, The advanced motion detector lets you capture the right moments without recording unnecessary long periods of waiting. It also lets you protect the files with a password, and disguise the app as a custom image that would look like anything you choose, from a browser window to email client. You can also preview videos in a tiny window and quickly close it with one swipe gesture. Starting the recording is easy and can be done in a blink of an eye, which can be crucial sometimes. You can then email short files to yourself from the app, or copy everything to your computer via iTunes. There is no recording time limit. 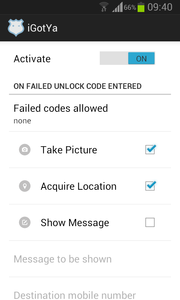 This app may become handy in many situations when your smartphone is not under your control. Waiting for your friends or parents to free you on bail and wonder if someone might be snooping in your device? Or, got it stolen and wonder if you can get it back? iGotYa is an alternative to Find My iPhone and the likes of it, and lets you capture the face, or faces , of the thief or snooper, geo-tag the image and upload it to your email immediately. It is easy to set up and use, but most importantly, the snooper or thief won’t be able to do anything about it. Whenever an unauthorized person tries to access your device, the front camera takes a snapshot, tags it with date, time and location with a Google Maps link, and sends it to your email or Facebook. 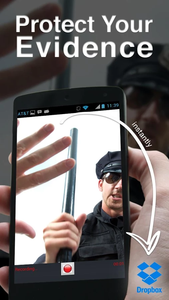 This app was specifically designed to record police misconduct in a fast and secure way. Immediately after the recording is finished, the app uploads the file to your Dropbox account, and voilà, you have your proof safe, and even if the ‘offender’ ‘accidentally’ smashes your phone, you know you still have that proof in the cloud. Now, don’t get misled by the app’s description. It says it uploads the video as you record, but in fact it uploads it after the recording is done. The app also has a 10 minute limit, so keep that in mind. On the other hand, it is simple and with the minimalist UI, you can start recording in a blink of an eye, which can be a deal breaker in many situations. 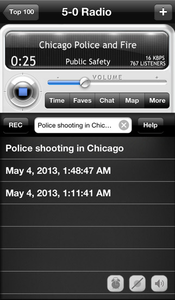 If you are a radio enthusiast and like to scan Police frequencies on a regular basis, Police Scanner 5 is the right tool for you. With the availability of over 2.500 radio feeds for police, rescue, fire and other frequencies, it brings all that goodness to your device over 3G or WiFi. You can search by country, state, province and city even outside the U.S., save favorite channels and find channels in your location based on GPS triangulation. The app can run in the background, too. It lets stay ahead of regular news channels, and keep your family safe knowing what’s going on around your neighborhood. It is also great for fire department workers, but if you are doing copblocking once in a while, the app may be very handy. 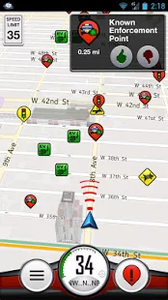 Trapster is an awesome internationally acknowledged app that lets you avoid police speed traps and the likes of them. The app generates the trap maps based on user submitted information, and alerts everyone in the area about them. Everyone with Trapster installed that is. The Trapster community consists of over 20 million drivers worldwide, so you can always know where there is a traffic jam, speed traps, accidents, live police, or even construction zones and other road hazards. It is not exactly cheating speed traps; it is simply staying safe on the road. The blue line on your route means other users have recently patrolled the road and it’s labeled as safe while live audio and visual alerts will keep you updated of traps and hazards in eight available languages. The app also notifies you of speed limits in the area an monitors your current speed. 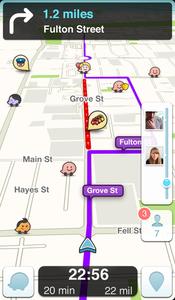 Waze is an alternative to Trapster, and probably even more popular with 40 million users. It also generates speeding traps and other road hazards information based on user patrolling and reporting, and lets you stay out of trouble and even save time and money while driving and commuting. It sports solid maps and a robust reporting system, which keeps all users updated in real time. It also generates lowest gas prices places along the way you drive, and lets you stay in touch with your family while you are on the road. The app also learns your frequent routes and commuting hours, and lets your family see your estimated time arrival as it tracks you en route. Don’t use it at all times, though, because a continuous use of GPS will drain your battery quickly. 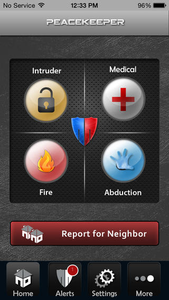 As far as community safety is concerned, Peacekeeper Emergency Response is an ingenious concept very well implemented. If your neighbors and you are committed to protecting your community, use this app to coordinate patrolling and let each other know who does what, where and why safety-wise. The app takes community safety to unprecedented heights and lets individuals organize a highly effective defense force against crime. All you have to do is set up a network, which is quite simple – your neighbors just have to install the pp and create a group, or join an existing one. Whenever bad things happen, a network member sends out an alert, which only takes a few seconds to accomplish. All members of the network receive the alert and can ping back to the victim with a short ‘On It’ message to assure him or her that help is on the way. I cannot think of a single negative feature here, and my only complaint is there is no Android app still. Hopefully, the developers will roll it out sooner than later.

Finally, for instances when you want to check whether the fine you are about to receive is legitimate, or maybe you can make your case and free yourself from the hassle going to the court, you can have one of these apps as your mobile legal database. Of course, it takes a little bit of practicing as you learn how to navigate and use them to your benefit, but it is well worth the trouble. 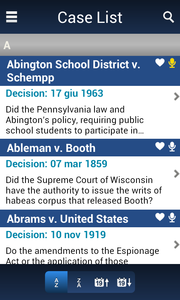 PocketJustice lets you go beyond the Bill of Rights and tap deeper into the Supreme Court precedents, which can be of more benefit in some cases. PocketJustice features over 100 Supreme Court cases with some audio of oral arguments covering most police-power cases. You don’t necessarily need to download the audio because the app supports streaming, pausing and resuming hours later. 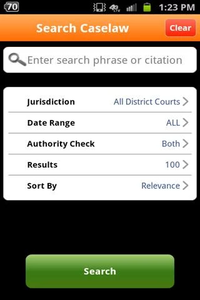 Fastcase is a go-to mobile app for fast legal and procedural searches for federal and state law cases, and covers more than just traffic fines or warrantless searches, but nearly every category, putting literally American law knowledge base in your device. Robust search options let you search by keywords, citations or browse statute collections. A very useful app for any American, it covers cases and statutes from the federal government and all the 50 states. With the entire power library it offers, it is amazing why it’s free. Of course, you are not going to do the substantial research on a mobile device, but it’s a go-to library for smartphones.

That’s it for today. I hope this helps you stay out of trouble. If you have more apps suggestions that fall under this category, let us know in the comments below.