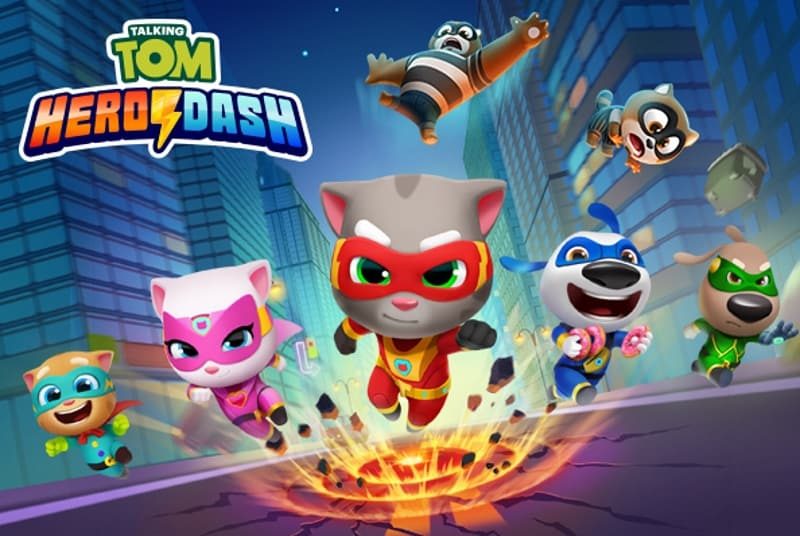 Talking Tom Hero Dash, Outfit7’s eagerly anticipated superhero game, has finally launched globally for Android and iOS. It’s an exciting runner that sees the iconic Talking Tom and Friends characters come together as Talking Tom Heroes – the world’s greatest superhero team. A pack of nasty raccoons has been busy wrecking cities all around the globe, so the task of rebuilding what was lost and saving the day falls to Talking Tom, Talking Angela, Talking Hank, Talking Ben, and Talking Ginger.

However, most members of the Talking Tom Heroes team have been kidnapped and hidden in secret locations around the world by the raccoons, leaving Tom alone to rescue his friends. You’ll do this by exploring and rebuilding each of the game’s 5 expansive cities.

Racing through the locations and dodging hazards is made all the more enjoyable by the inclusion of the team’s awesome superhero powers and gadgets. Some of these include a strength-enhancing vest, special tracking glasses, and a speedy hoverboard.

Collecting loot and cash throughout each stage will allow you to gradually repair everything that was vandalized by the raccoons. Once you’ve brought the city back to its former glory, you’ll need to take on a powerful boss to properly complete the level. Doing so will get you a new playable member of the Talking Tom Heroes, so it’s well worth the effort.

To make a start on saving the world from those pesky raccoons, best head straight for the App Store or Google Play to download Talking Tom Hero Dash for free. And if you’d like to know more about the team and their adventures, you should check out Outit7’s Talking Tom Heroes animated series over on YouTube.