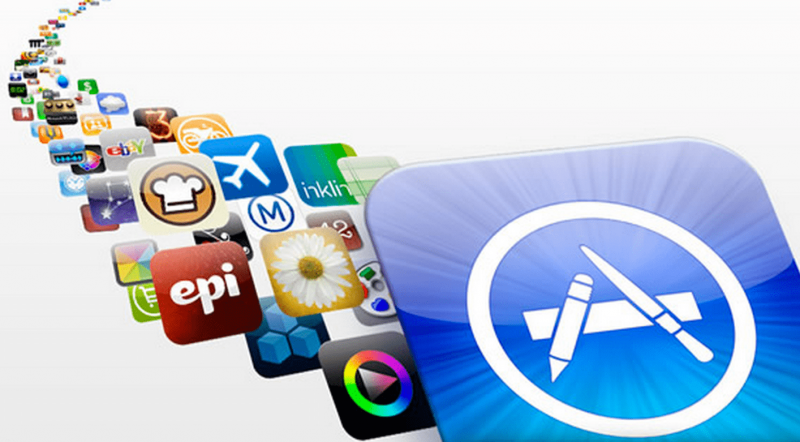 Right now, there’s no official app store (for any mobile platform) that surpasses Google Play Store, regarding the total number of apps. However, there are lots of other alternative app stores worth checking out, especially if you’re always on the hunt for the best deals, new apps or apps that are not available in the Play Store.

Some of these third-party app stores are borderline or downright illegal, featuring pirated apps while others can present security risks. Luckily, there’s a decent number of app repositories that have security measures implemented, and also provide many quality apps.

Furthermore, you can get discounted apps and paid apps for free in many of these app markets. We took all of that into account, so here’s our selection of some of the best app store alternatives to Google Play. 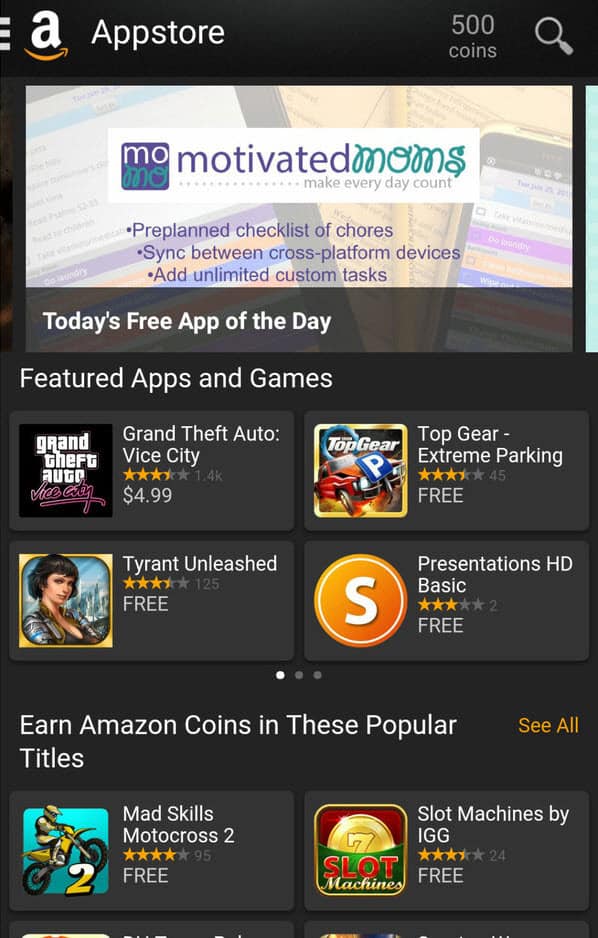 I’m acutely aware that almost every Android user out there knows about the Amazon Appstore. It may not be your favorite, but it is the second largest after Google Play with over 300,000 apps and counting which is why we felt compelled to list it here. Even if you might not want to browse the Amazon Appstore regularly, you can still put it to good use.

It offers one paid app or game for free every day along with other discounts so it’s an interesting alternative to the Play Store on this aspect. For now, Google’s shy attempt of offering one free app every week is limited to the Family section – a very specific niche that may not interest you. Not all of Amazon’s app offers are going to blow your mind, but from 30 free apps a month there’s a good chance you’ll find some of them useful.

GetJar – Because you want paid apps for free 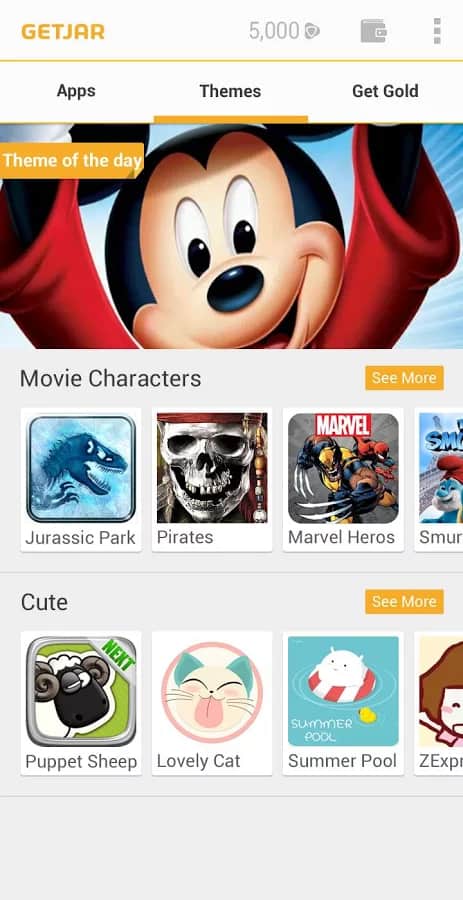 GetJar exists long before Android and in its first years, it offered apps for classic mobile environments like Blackberry, Java and Symbian. Even now, GetJar offers apps for multiple platforms, including iOS and Windows Phone among others.

Regarding security, the GetJar app is available in the Play Store, which says a lot on its own, because most alternative app stores apps are not. In theory, through the GetJar Gold system you can earn credits by installing apps, which can then be used to buy apps and IAPs for a wide variety of apps, with many popular titles included.

Why ‘in theory’? Because the reward system is not very reliable, at least not anymore. I honestly don’t have the patience to install and uninstall dozens of apps to earn credits and test the system but I do have friends that tried and most of them just gave up for a variety of reasons. I also tracked user feedback in public forums and found the same problems.

Over time, the rewards got smaller and smaller making it more difficult to earn a decent number of credits within a reasonable period of time. That wouldn’t be such a problem if the rewards would actually be provided. A lot of people are complaining they’re not being rewarded after installing apps. Others are also having trouble using those credits as errors occur which results in credits spent but without actually getting the apps or IAPs they were used for.

With that said, it might work for some – if you’re attracted by the idea of getting paid apps for free, it’s worth trying GetJar, just don’t waste too much time on it if you’re running into any of the problems I mentioned above. 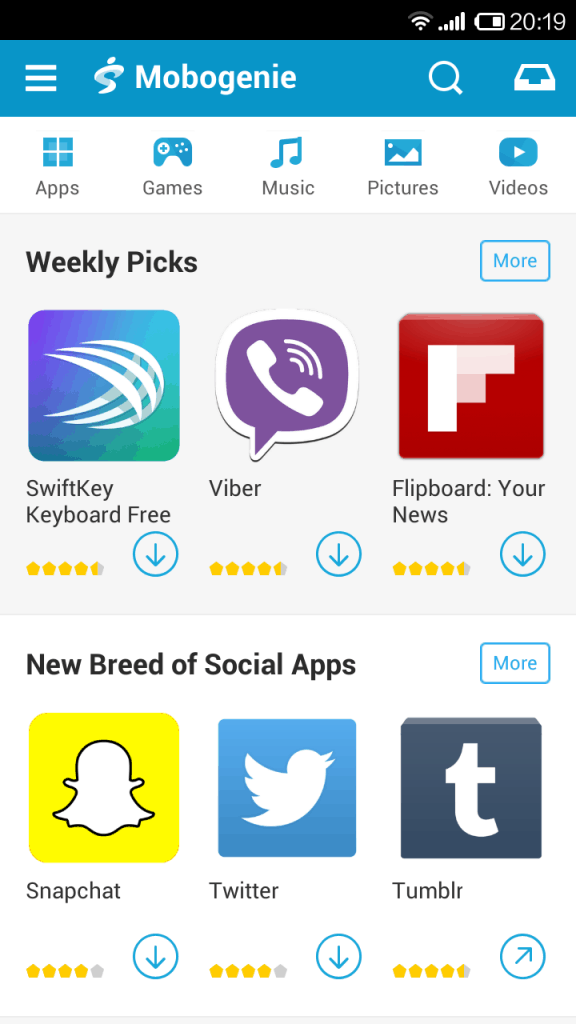 Mobogenie is not an app store market per se, as it features Play Store apps, but it does make for a reliable app discovery tool. Its ‘intelligent’ recommendation system that can analyze your preferences and offer practical suggestions.

It’s safe to use, the UI is clean and privacy wise there are no complaints from my part – you don’t even have to register. Mobogenie comes with a built-in file manager, and lets you download other types of content besides apps such as books, ringtones and wallpapers. There’s also a PC client that lets you transfer files between your computer, phone and tablet, but also includes other tools like a contact manager and one-click backup for your Android devices.

F-Droid – The heaven of open source 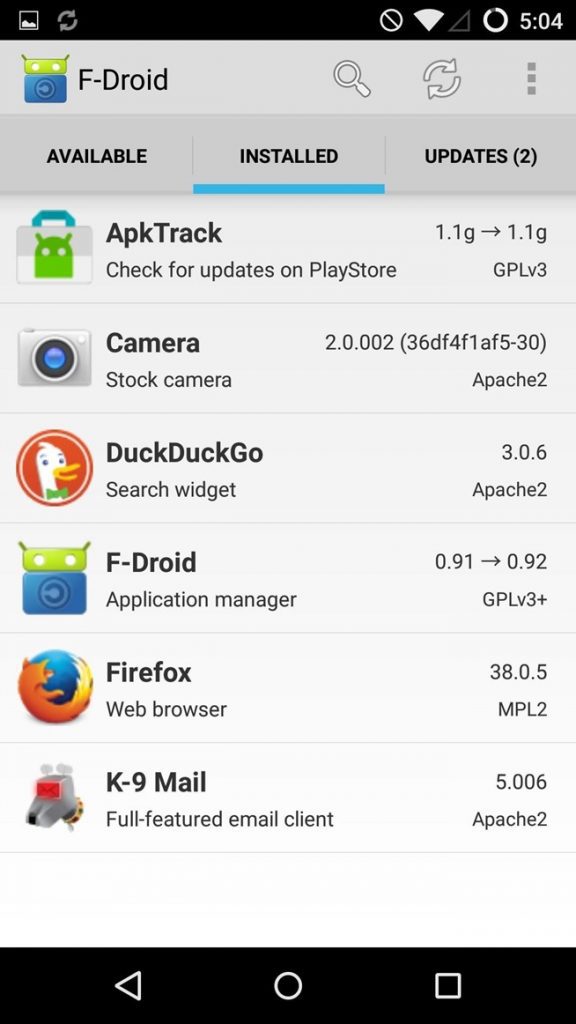 If you’re into trying out Free and Open Source Software (FOSS) apps, F-Droid is the place to go. In fact, anyone can create their own app store on F-Droid, although I’d recommend sticking to the main repository, which is handled and verified by the F-Droid staff.

As I just said, F-Droid only lists free and open source apps, so this is not the place to look for bargains and discounts. It might be of particular interest for developers that want to learn by example, as many of the apps have their source code published on the official website.

Security wise, F-Droid flags apps that have what they call “antifeatures” which involves a number of things like ads, tracking, and paid features or apps linked to the so called free app. This app market may not seem very attractive for regular users, but more suitable for tech enthusiasts and Android developers. 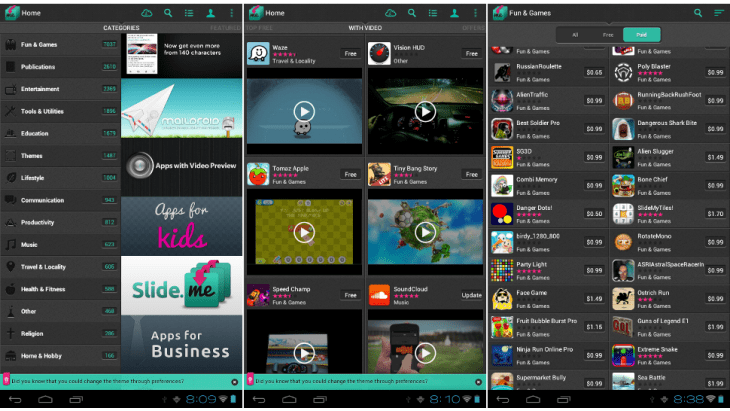 SlideME is a great alternative app store that also has a community component to it. Both free and paid apps can be rated by users and more importantly all of them are tested for malware and then reviewed by editors before approval.

Apps can be sorted by newest, updated, ratings, price and other criteria, but also filtered by categories such as productivity, education, entertainment, finance and the list goes on. The app store is available globally and offers several payment options, including PayPal. The SlideME app comes with multilingual support and accepts a large number of currencies for payments. 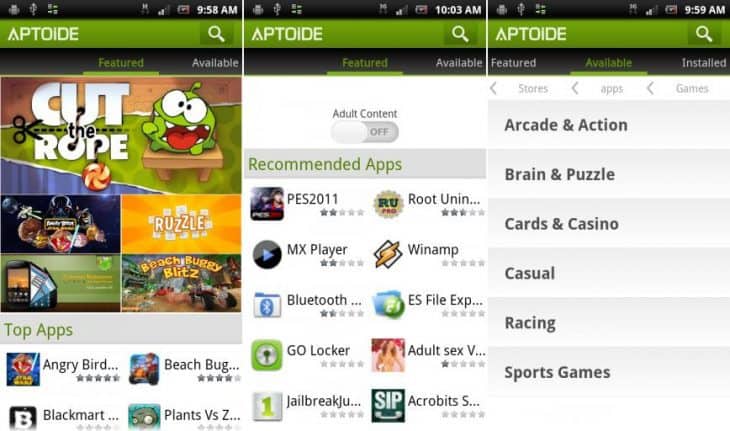 Aptoide is an app store platform containing over 100,000 app repositories created by users. The first version of the F-Droid app was based on Aptoide, hence the similar system. All the popular titles are here, and sometimes you can get paid apps much cheaper than on Google Play.

Many new apps are added to Aptoide on a daily basis, and more often than not, it takes some time before they can be scanned for malware. Even so, the scan is pretty thorough as it uses a bunch of anti-virus engines and also app signatures are compared against other Android marketplaces.

You can see the security status for each app right on the Install button. If it’s grey it means the app hasn’t been scanned yet, yellow if there are any inconsistencies and green if the app is trusted. Trusted apps are safe to download but I would stay away from apps that have warnings or are not yet scanned. More details regarding the app’s security status can be seen by clicking on the small link right below the Install button.

For best security practices, stick to Aptoide’s main repository and as a general rule of thumb download only trusted apps. 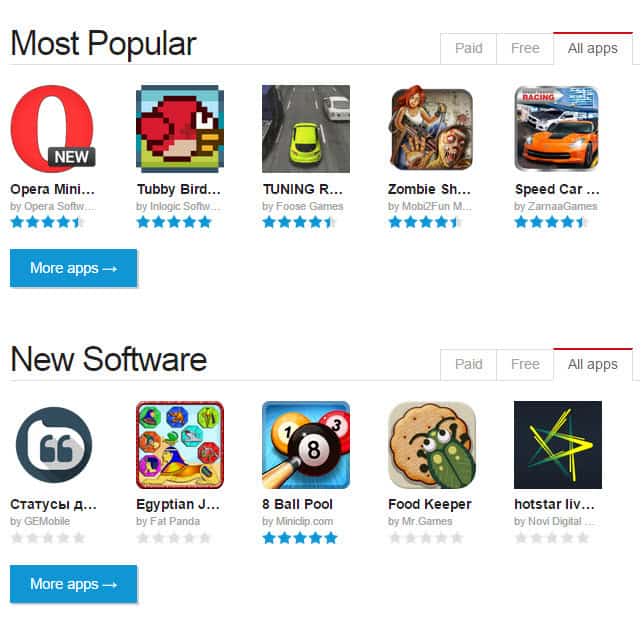 Opera’s app store has over 300,000 apps, but before you get too excited know the number is divided among several platforms, including Android, iOS, Windows Mobile and Blackberry. Although, a smaller Android app market, Opera Mobile Store places a number of discovery tools at your disposal in a clean and pleasant interface.

At the very least, all apps offered here, are legal and secure, and most popular titles are present. Other than that, I haven’t been able to find other benefits from using this platform. You can either download APK files from the Opera Mobile Store website on your PC, then transfer them to your phone, or access the store directly on your Android device from Opera Browser. 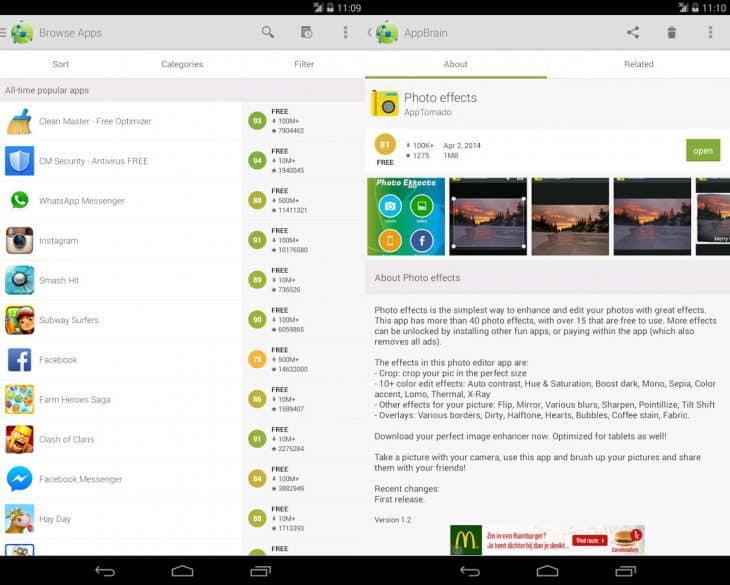 Like Mobogenie, AppBrain is an alternative front-end for the Play Store. Just to be clear, this means all apps you find through AppBrain can ultimately be downloaded and installed from the Play Store, which makes them as safe as they can be.

What makes AppBrain stand out is its great interface. You can easily sort search results by ratings, relevancy, popularity and so on, but also browse through various categories, for which the listings can be refined as well.

AppBrain keeps all apps and games well organized, and it makes a great tool to explore and find new titles that may interest you. If for some reason, you’re not fond of Google Play’s interface, check out AppBrain and give it a try.

App stores from device manufacturers are obviously smaller and oriented towards specific devices, but they can hide some surprising gems, so do not ignore them completely. Plus, some of these apps are hardware-specific, so it’s likely no third-party alternative will perform better.

LG Smart World – LG’s app store includes software for both mobile devices and their Smart TVs. It has a beautiful design and a decent number of apps, even for non-LG devices. 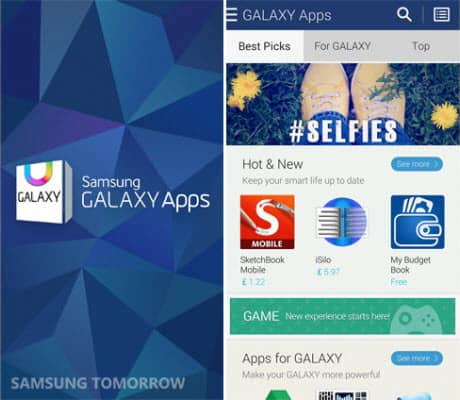 Samsung Galaxy Apps – Most Samsung devices have the Galaxy Apps app preloaded, but you can visit the link I provided to download it, if you don’t have it. Samsung’s App store includes a variety of quality apps, app discounts and even paid apps offered for free.

Many other manufacturers offer app collections like Motorola and HTC for example, but they don’t have actual app stores. The ones presented above are the only true app stores I’m aware of, please leave a message if you know others.

There are dozens other app stores for Android, and some of them have a lot of potential. We decided to feature only those for which security related information is showing they’re safe to use, but we may have missed some. If you know any other notable app store that implements proper security measures, drop us a line in the comments section below!

Looking for quality apps and games? Check out our Roundups section for our carefully handpicked collections. And don’t forget to follow us on Facebook, Twitter, Pinterest, Flipboard and Google+ to receive our latest mobile how tos, and apps & games reviews for Android, iOS and Windows Phone!