Niantic’s Pokémon Go has skyrocketed to the top of mobile game charts and you’ve probably contributed to its position if you’re reading this. Our love for augmented reality games is not new and it was about time someone used AR in a game to its full potential.

We’re glad to see this happened with Pokémon Go and ever since it was released it managed to draw in even people that had no previous the Pokémon franchise.

15 Pokémon Go tips and tricks you need to know

The game is undeniably addictive and if you’ve been frantically venturing in the real world trying to catch as many Pokémon as possible, we’ve got some excellent Pokémon Go tips & tricks to help you catch even more and level up faster!

Choose Pikachu as your first character 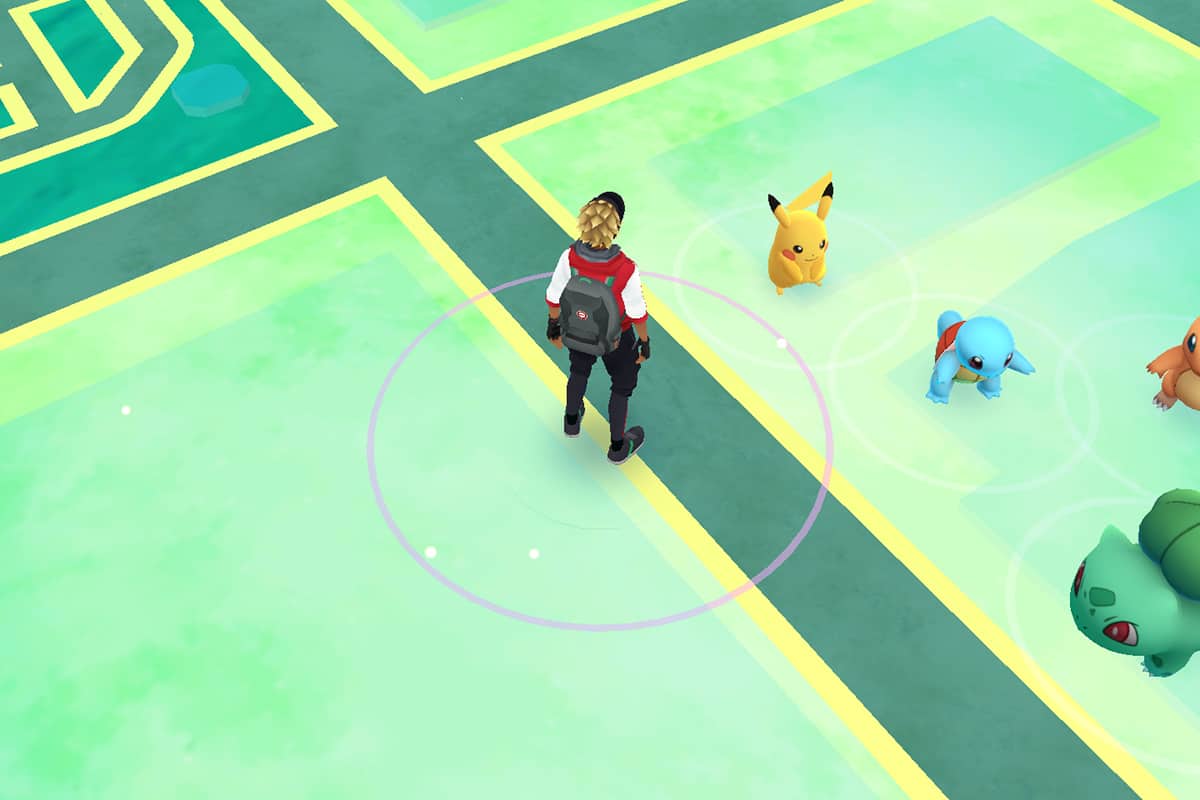 When you start to play the game, the Professor will ask you to catch a Pokémon and you will get options like Bulbasaur, Charmander, and Squirtle. Walk away a few times and at some point, Pikachu will show up.

Reject the others and catch him as your starter Pokémon.

How to measure distance from nearby Pokémon 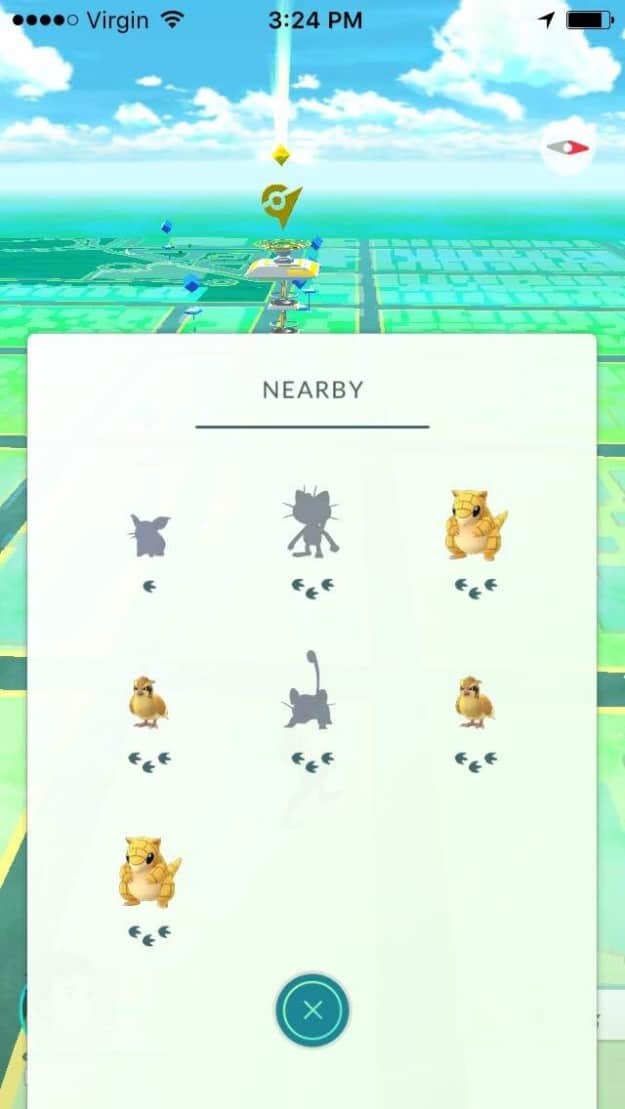 This is an AR game, so it will keep track of your real-world location via GPS and the distance to nearby Pokémon will be measured accordingly. Pokémon in your vicinity are shown with a number of footprints – of course, one footprint means it’s close, two means it’s a bit further…..it’s pretty straightforward.

What you might not know is that these footprints set a radius from the start point and one footprint means 100 meters away, and two footprints mean the Pokémon is 200 meters away. Direction is irrelevant – just start walking and you will see the lower bar fluctuate as you’re getting closer. Also, rustling leaves are a sign you’re nearby a Pokémon. 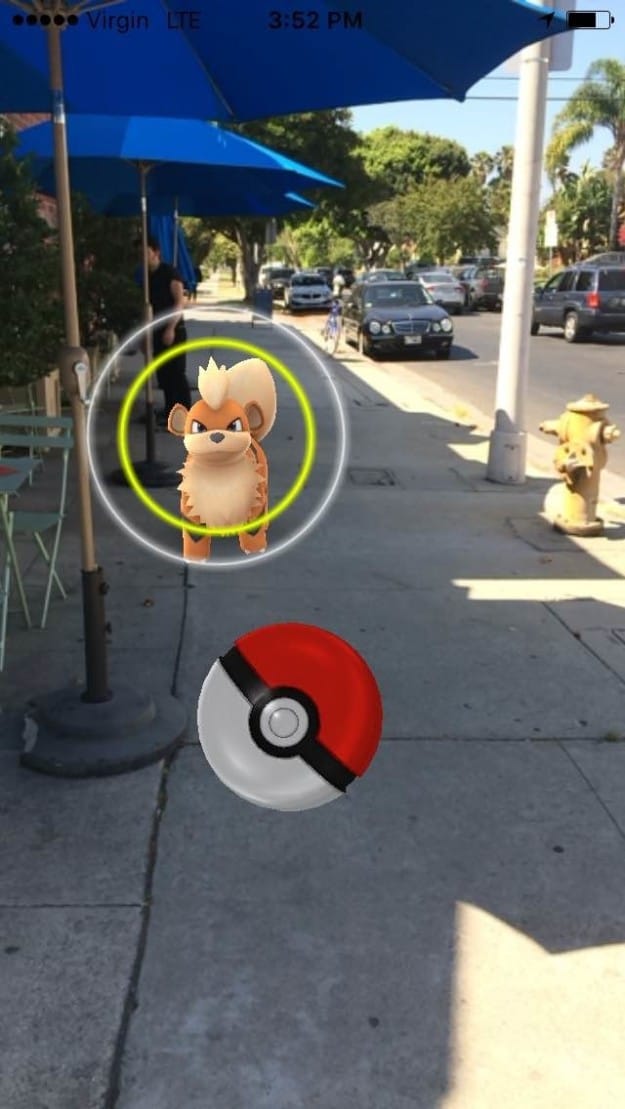 No need to waste any Pokéballs if you throw them correctly. Wait for the circle to shrink around the Pokémon before you throw the Pokéball. Timing this right will increase your chances at catching the Pokémon.

Also, watch the circle color – green means the Pokémon is weak, yellow is medium and if you see red expect the critter to have lots of combat points and be more difficult to catch. Whatever eggs you find, don’t forget to place them in an incubator. For an egg to hatch you will need to walk the required distance, or use rollerblades, a skateboard or a bike. Get up you couch potato! It doesn’t work with driving.

You will need to walk further to hatch a rare egg 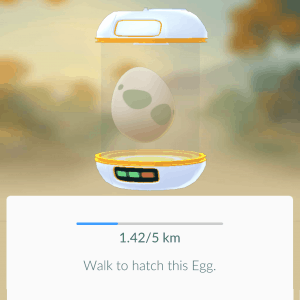 If an egg requires you to walk for 10 km it’s rarer than a 5 km egg and you can be sure it will yield better rewards. Calories well spent! 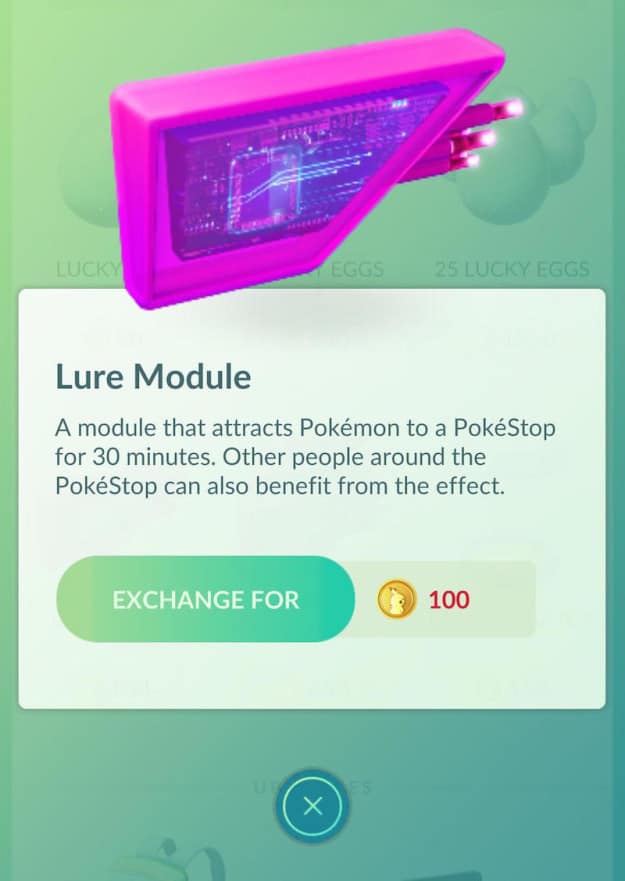 Lure Modules can be detected by falling pink leaves and once one is activated it lasts for half an hour. They have an area effect so you can still reap the benefits if you’re at a Pokéstop and someone else uses one.

You can also purchase a Lure Module from the store for 100 coins, but if you have some time to spare and want so save some money just go at a crowded Pokéstop and wait for someone else to use one.

When you reach higher levels Razz Berries, as well as Ultra and Master Balls will begin to show up at Pokéstops. You can use the more powerful Pokéballs to get a higher chance to catch Pokémon, and feeding them Razz Berries will increase your odds even more.

Get your daily free items from the shop

Pokémon Go is freemium so this means it’s loaded with IAPs. However, if you tap on the Pokéball icon to open the Shop menu, you will see a shield icon which you can tap to get a daily free bonus. Even if you forget to tap it for a few days you can tap it and get all the free items that have accumulated since your last claim.

At the beginning of the game you will find two incense items in your backpack. If you use one, more wild Pokémon will appear arround you for half an hour. It’s a great way to catch more of them by just standing still and waiting for them to show up.

Once you win a gym, defend it!

Until level five, you’re just getting accustomed to the game. From then on, the real fun starts. You can join the Valor, Mystic or Instinct team and capture a gym to earn in-game currency.

But once you capture  gym, you will also need to defend it. This is best done by leaving some of your powerful Pokémon to protect it. If you come across such a gym that you want to claim, you will need to enter Combat mode.

Keeping it safe ensures you will be able to head back to your conquered gyms every day to get a coin bonus, and who doesn’t want that? 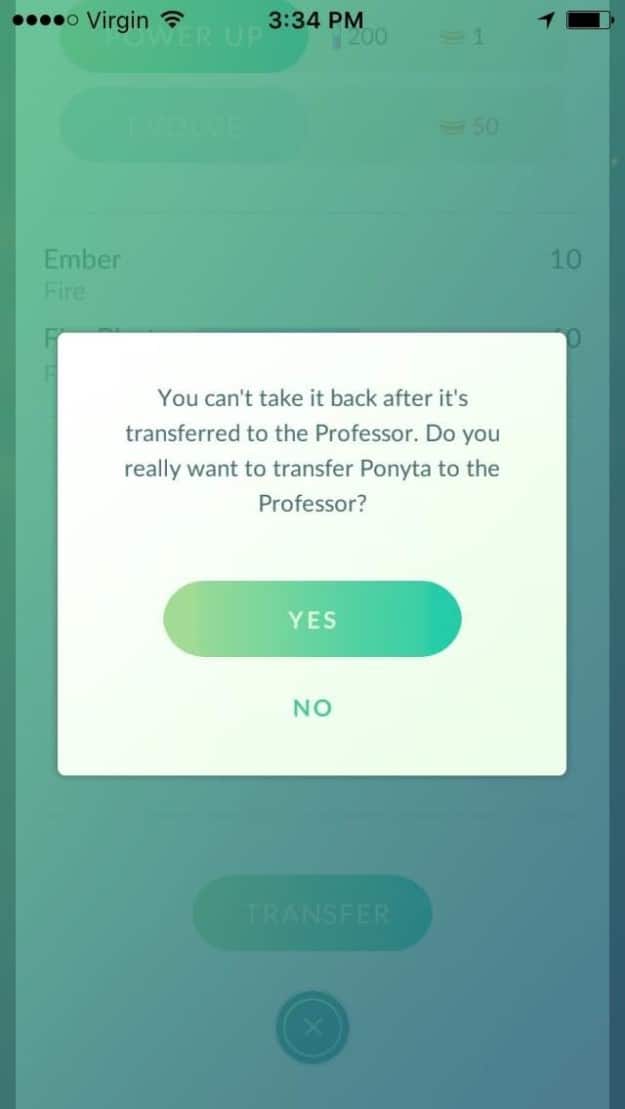 If you’ve been playing Pokémon Go a lot, then you probably have a bunch of duplicates already. No need to keep them all – just tap on the Pokéball button, select a duplicate Pokémon and then select ‘Transfer’.

The Professor will gladly receive it and give you some Candy in return, which you can use to increase CP and force evolutions.

Go to landmark Pokéstops and get better loot

There are many Pokéstops, but if you want bettr items be sure to visit landmarks. This means post offices, sculptures and monuments, but also national landmarks with the latter being known to yield potions or revives more often. 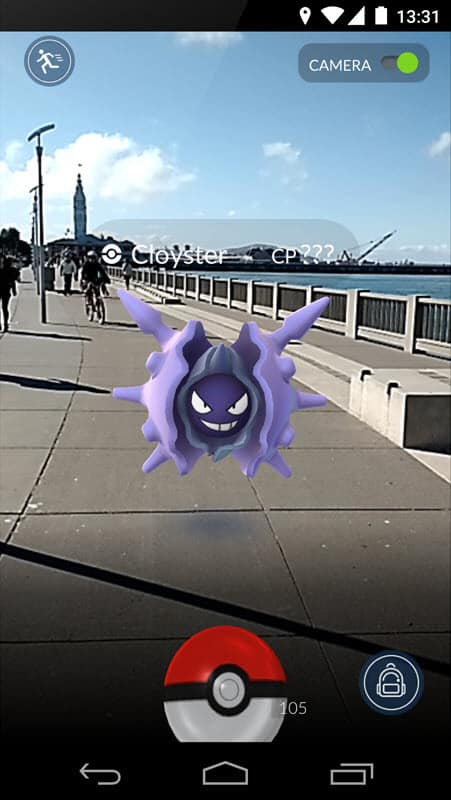 It makes sense that you will find sea Pokémon near rivers, lakes and other bodies of water. The same goes for forest and grassland Pokémon which are typically located in and close to parks, and you can spot Gastly only during the night. 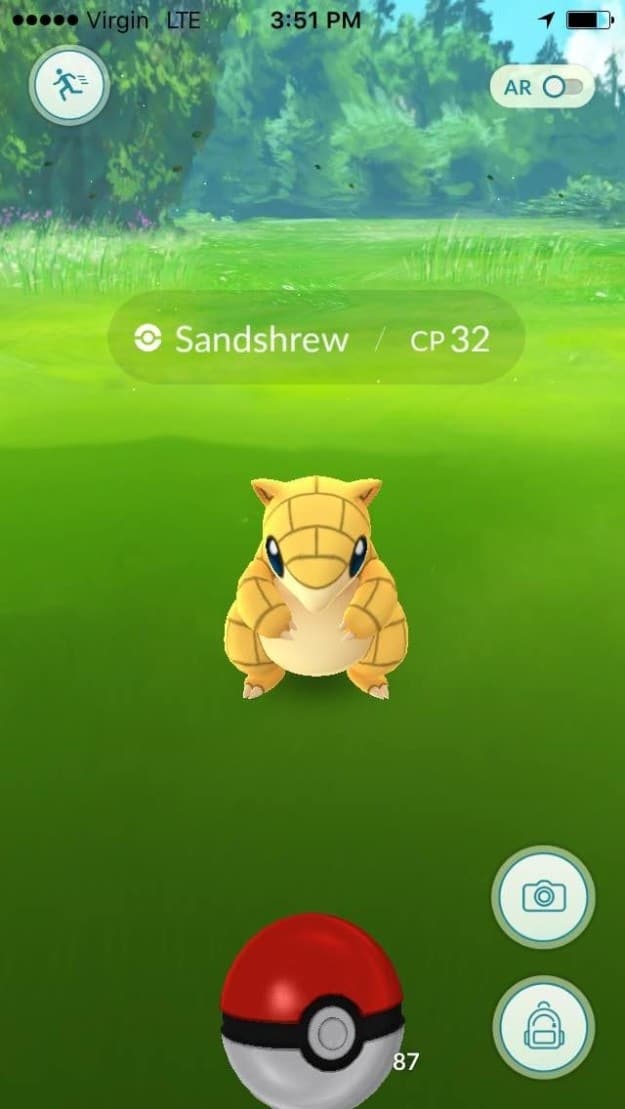 If you’re about to catch a less-wild Pokémon, you can disable AR to get a better view of them. It will also let you control them more easily and you won’t embarrass yourself while waiting for your coffee at Starbucks. 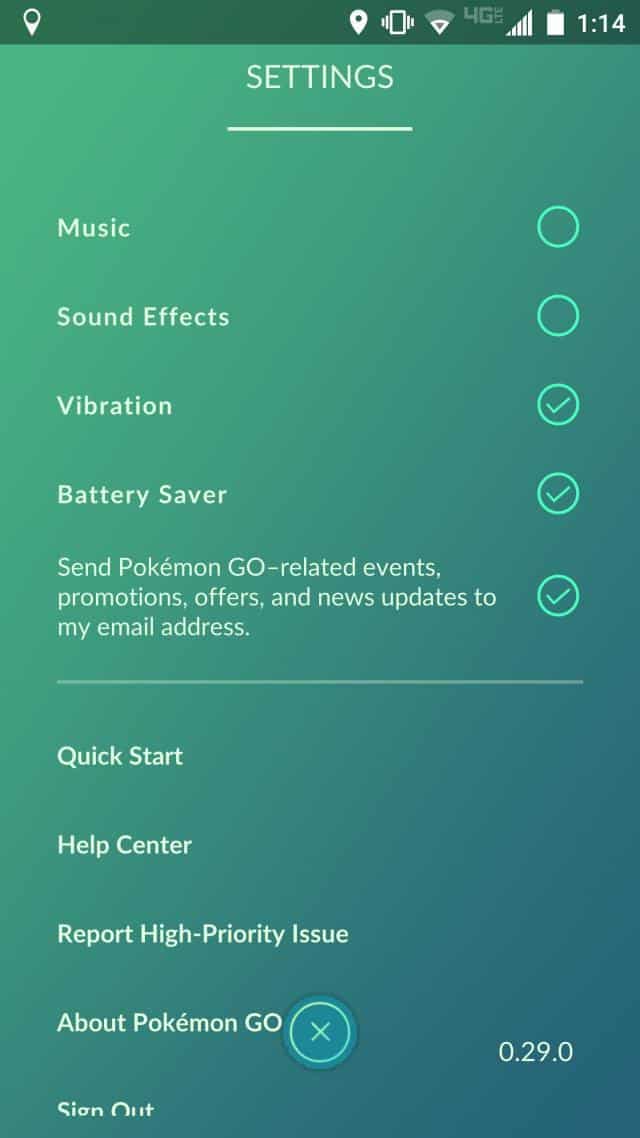 Most of the Pokémon Go tips and tricks I mentioned so far are about the game-play. This one is more about your phone functionality, but just as important. Pokémon Go will continuously sync data on your phone with the game servers, and also use GPS tracking at all times.

This translates into a terrible battery drain and the game can easily consume an entire charge in under an hour. Until a fix arrives (and it definitely should), you can reduce the battery drain issue by using the game’s Battery Saver Mode.

What it does, is it automatically turns your screen off when you keep your phone upside down in your pocket. It doesn’t actually close the app, it just turns off the display.

If you have a pair of earphones plugged in you can hear a sound when you’re getting near a Pokéstop and your device will vibrate when you’re close to a wild Pokémon.

What are your favorite Pokémon Go tips and tricks from today’s roundup and what other useful ones can you share with us?