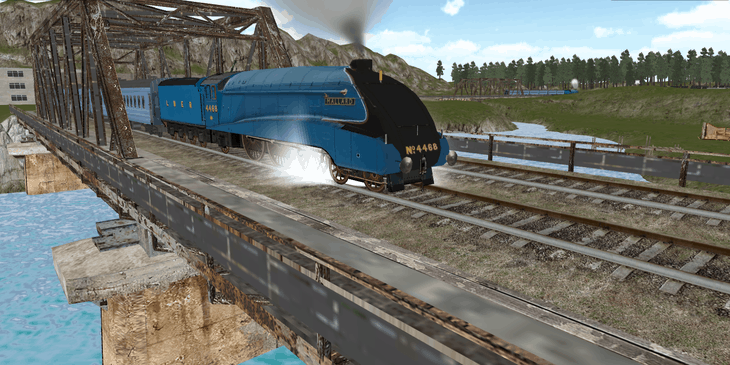 There are plenty of simulation games [read our roundup], and flight sims are probably the best of them all. Train and railroad games, on the other hand, seem to pose a tougher challenger to developers because it was very difficult to compile this list. If you take a look at Google Play’s first page of a ‘railroad’ or ‘train’ search result, you may have a different opinion – there are dozens of the games. However, when you start going through them one by one, it’s getting rather challenging to find the real deal. Nonetheless, the search was worth the trouble because if you are like me, and love trains, you will appreciate a nice railroad adventure, be it a sim, a puzzler, or an endless runner. Let the endless runner begin the list, then. 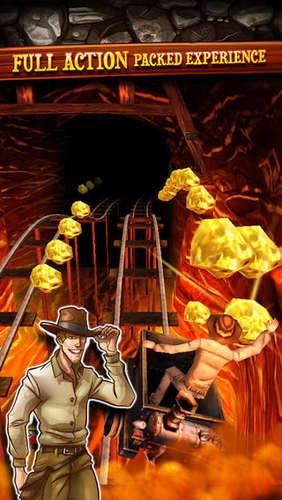 Rail Rush is a true classic of the genre and combines endless runner and the railroad maze. Your character is riding a crazy cart along endless railways – some are broken, some are abundant in golden nuggets, others have all sorts of obstacles on them, high and low. So, get your fingers ready for some intense tapping to dodge, jump, sway and duck. There will be an occasional bonus or a surprise along the way, but it’s the ride that counts. There are 9 colorful dungeons to ride, and 17 fancy characters to unlock.

First, you ride a simple cart, but as you progress, you can unlock all sorts of power-ups that will make you look like Jigsaw from the Saw franchise, with your hands full of creepy things that smash the obstacles. The environments are really awesome, and you will explore, or rather dash through a Snow Land, Undersea World, Steam Factory, Amazon Jungle, Crazy Caves, Jurassic Jungle, Pharaoh’s Tomb, Swet Wonderland, and Horror Land, each with its own perks and dangers. So, if you love trains, but don’t feel like wrecking your head over a railroad puzzle, or mingle with a sim’s controls, get your hands on Rail Rush, let that logic go and dive head over heels in the pure subconscious of instincts and reflexes. 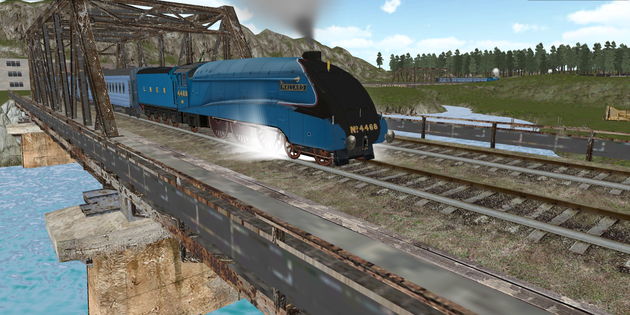 As far as train simulators are concerned, we suggest you try Train Sim. It is a 3D trains and railroad simulator puts you in control of various trains as they ride about their usual business. The game features eight pretty realistic scenes, 37 train types, 23 train car variations, and toggles to let you control speed, direction, train lights, sound horn and bell, switch between day and night modes, pan and zoom the camera, or even sit inside the engine car. The controls are simple enough for kids to handle, and you can stop at train stations to let the passengers in and out, although driving and whistling is pretty much all you can do. Nonetheless, the game is realistic and quite fun. The Pro version has neither ads, nor in-app purchases, but lacks missions, or quests, or any purpose whatsoever. You’re basically just driving, making stops, switching modes and toggling controls, which explains why some users rate it 5 stars praising the sim while others feel disappointed. 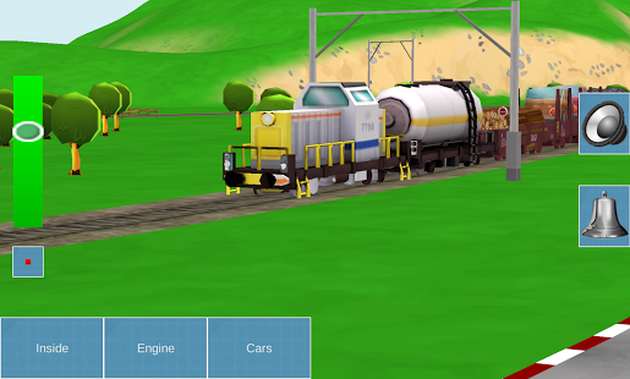 The same developer released an even more kid-friendly version, which looks colorful and bright, but has less quirks in user interface and lets even the smallest of children who just start out with mobile gaming control the trains’ speed, horn or bell. There are steam, freight and passenger trains, and different camera angles. Overall, it is a fun and hassle-free trains simulator for children, featuring cartoon-ish design and basic functionality. 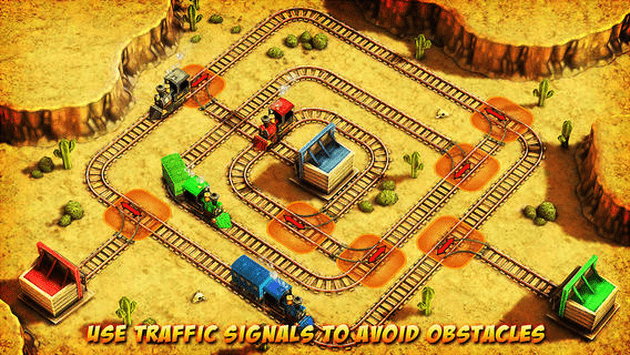 Classic of the train puzzle genre, Train Crisis is a beautiful 3D that tasks you with getting the color-coded trains to their respective homes by toggling tracks, and switching them to prevent train collisions. The initial levels are easy, as usual, but the more you proceed, the trickier get the puzzles, and sometimes you only have half a second to toggle the tracks. There are different environments covering 7 eras of railroad evolution from industrial era, through Wild West and modern to future era. The challenge variety is great, and solving puzzles is as much fun as watching the trains collide. Combine your strategic thinking with puzzle solving skills, and you will be able to advance and enjoy fully various 3D environments with tunnels, mountains, banks, animals, forests and other nifty details. The puzzler offers 168 levels and an in-game help tool, with social integration and cloud save, as well as achievements and leader boards. 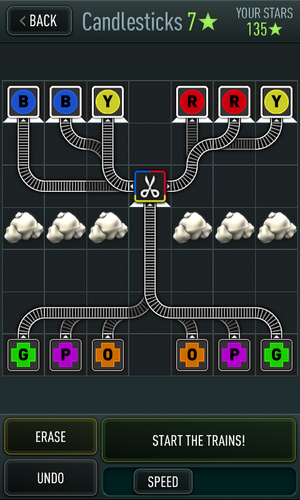 If you like the Flow type of games where you have to connect corresponding dots on a grid, Trainyard Express may combine your favorite type of puzzles with the train theme. You have the grid of rectangles, several points for outgoing trains and corresponding color-coded entry gates. Your task is to build tracks by drawing lines on the grid. There is no time limit, or points, but the puzzles are difficult enough to re-watch the tutorials.

Each new level brings a new challenge – more trains, trickier entry points and track toggles. At some point, the grid starts getting crowded, and more complex mechanics are introduced, and when or if you get to advanced levels, you will be mixing colors, so the puzzler may only look basic, but it’s actually a very thought-through and graphically appealing brain exercise, and one of my favorite. 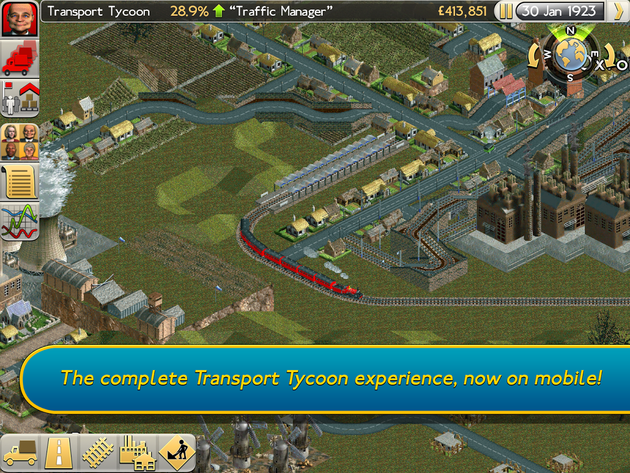 This originally PC strategy game comprises more than just trains, but an entire transport empire with passenger and cargo trains, cars, planes and ships. Deliver the cargo and passengers, keep the money coming in and make your transport company thrive. The variety of vehicles is impressive while the touch controls are intuitive and make game progress smooth and enjoyable.

You will build tram and railroads, bridges, tunnels, sea and air ports; explore deserts, mountains, valleys, forests and islands in different weather conditions; send over 150 vehicle types to deliver passengers and cargo; switch tracks and carefully plan train routes to let several trains use the same routes and junctions; modify vehicles and upgrade them; complete 49 missions and beat the competing companies. Transport Tycoon is a feature-rich, extremely detailed and beautiful mobile strategy game for the fans of everything that drives, sails, flies and rides. 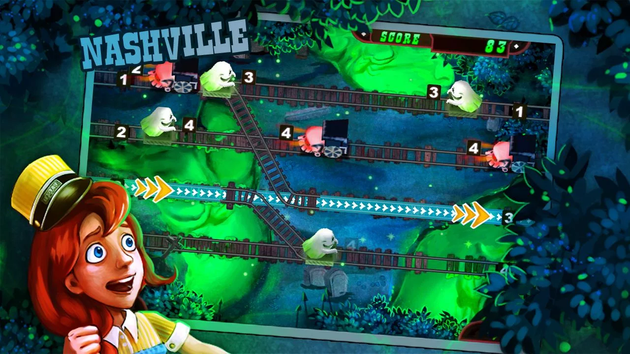 Enough railroad puzzles and sims, let us get some action. Train Conductor is a surprisingly fast-paced arcade, which tasks you with steering trains to their destinations. The catch is the trains are very fast, and ride simultaneously, so you will have to think fast and stop some of them to avoid collisions. There are ghost trains, different environments and various elements that populate the screen, so you will have to act very quickly.

The game does involve some puzzle solving, but it is ultimately about action, strategy and trains, lots of trains riding all the way through Miami Beach, Nashville, the Grand Canyon, New York and Las Vegas. 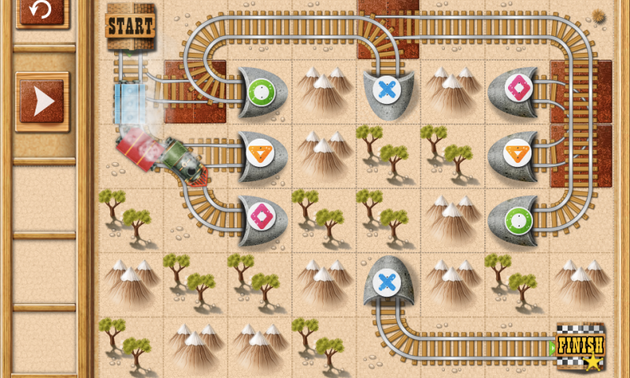 Rail Maze combines puzzle genre with train mechanics, and tasks you with switching tracks to let a train reach its destination. At least, the beginning is as simple as that, but as the puzzles become more complex, you will have to manage an entire screen full of trains, obstacles and junctions to rotate and switch. Sometimes, you will have to avoid or escape pirate trains, or avoid dangerous tunnels. There are several game modes that combine many fine elements from other railroad games, but does it in a fresh and quality way, so you are never bored solving puzzles, sometimes against the clock, so even if you are not much of a railroad fan, but appreciate a good puzzle, try it out. The Labyrinth mode is for puzzle fans; the Build Road and Snake mode is for action aficionados; the Longest Railroad mode combines both puzzle and action. There are over 100 puzzles with bombs, pirates, tunnels, long and short trains, and a great variety of challenges.

My Railway [Android, iOS and iOS] 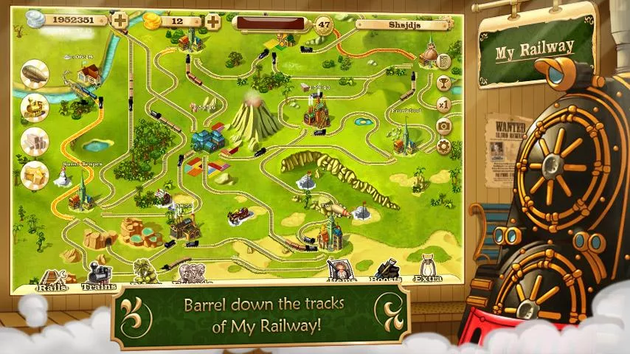 My Railway will please young and old players because it nails the core railroad concept. You get to lay tracks to connect cities, employ engineers, run factories, manage workshops and send your trains to deliver passengers and cargo. This game is the nearest thing to Transport Tycoon, but with a strong focus on trains and railroads, and the surrounding infrastructure. You will have to expand your network, compete quests, collect and earn items, customize and upgrade your trains and produce goods on your factories.

My Railway is colorful and visually appealing, with atmospheric and even amusing sound effects and immersive gameplay, so it’s quite a remarkable trains sim that appeals to a wide audience and offers challenges for players of all ages. 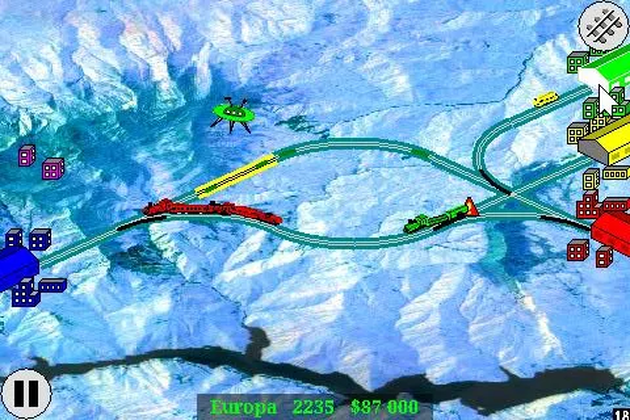 Railway Game is a very addictive railroad game where you build the tracks, switch semaphores and junctions, and let the trains reach their destinations safely. Occasionally, your trains will be bombarded by meteorites or UFOs, or crash, so you will need to call the repair train. It’s a simple concept well performed, which makes for a fun and addictive game. 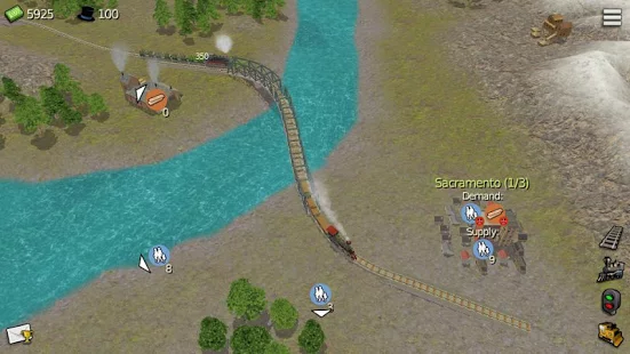 DeckEleven’s Railroads lets you build your own railroad empire from scratch and develop it into a thriving cargo and passenger transportation company. 3D design looks good, and players can choose from various train configurations, including the old-fashioned steam engines to modern electric ones. There is a variety of environments, too, so you can build your empire in the USA, Canada, France and India. It is not as comprehensive as Transport Tycoon, but it’s a great and free train sim and strategy game with a lot of potential and room for growth.

That’s it for today, and you are welcome to share your impressions and experience with these games, or suggest other train and railroad games you think are worth adding to the list.