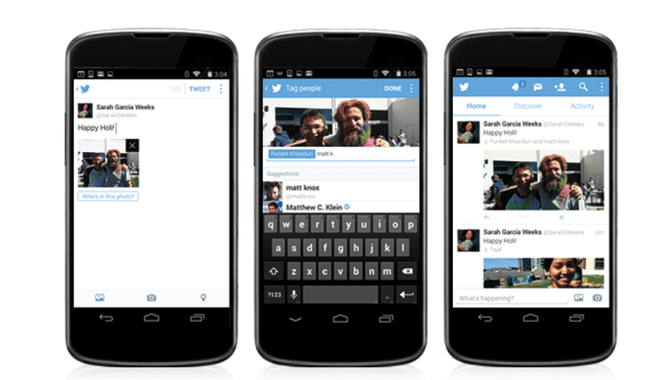 Many users automatically assume that the best application for Twitter is the Twitter’s native app itself, but that is not necessarily true. Android users of Twitter have a lot more options, and each option is a little different from the other. For many people, it may be quite appropriate to get a third-party application instead of Twitter’s native app, and here’s the list of some of the best Twitter apps available on Google Play as of March 2014.

By dots and lines 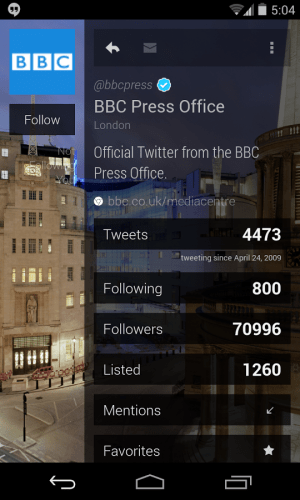 Carbon is one of the most popular and one of the most evident Twitter apps that has already run out of tokens for new users, which only states for its popularity and functionality. You will only be able to use it if you already have a token. This application sports a simple, neat and sleek design featuring YouTube player and in-app browser.

Carbon sets a goal to display all of your Twitter content on one page, offering the user maximum accessibility. This basically means that users don’t have to click multiple links and open multiple windows to do different tasks in their Twitter accounts, or find that specific feature, or content. As a result, you get the cleanly-cut interface displaying your lists, trends, profiles and so on within easy reach. 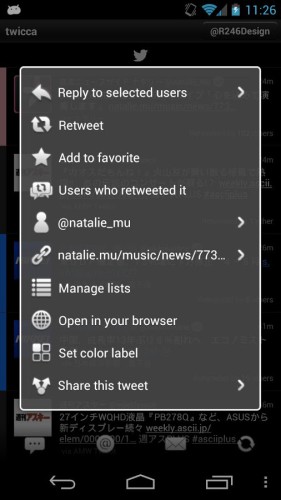 twicca is by far one of the most reputable Twitter clients for Android available on Google Play that has been around for quite a while now, but the app’s age does not mean it is outdated. In fact, the application is quite the opposite. One of the strongest points about twicca is its being extremely lightweight, which makes it perfect for even the oldest Androids smartphones and tablets. The app sports quite a simplistic user interface was minimal design, which is very effective and functional.

twicca has the option to tag people, so that certain people’s tweets are coded in a specific color. It is very convenient, since the user is then able to differentiate certain tweets from specific people from other users much quicker. Other than that, users are able to enjoy image previews, geotagging, tweet filtering and many other typical features. This simplistic, yet functional application, which is capable of running even on the older Android devices, costs absolutely nothing. 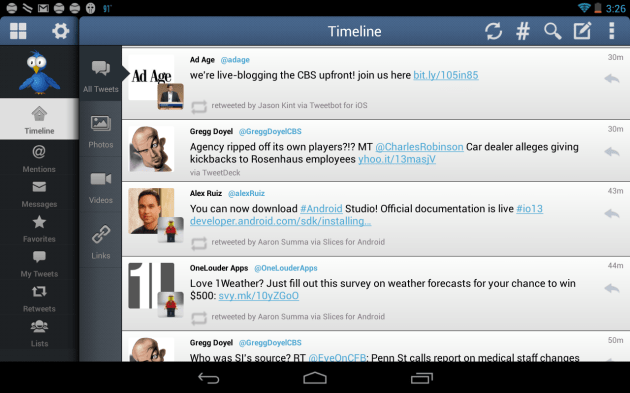 Tweetcaster is the app for the power users. This feature-packed application gives its users the ultimate control over their Twitter profiles. The application sports a mighty load of browsing features that enable users to filter and display only links, photos or videos. This feature comes especially useful if you’re trying to find a Tweet that dates back a few months. Tweetcaster enables users to merge tweets and timelines, which allows them to display tweets from a specific list in the timeline.

The app is extremely easy to use and highly customizable – users have 12 different themes at their disposal, as well as a large number of handy filters to sort out photos as they upload them. Powerful features, beautiful looks and functional UI come at $0. 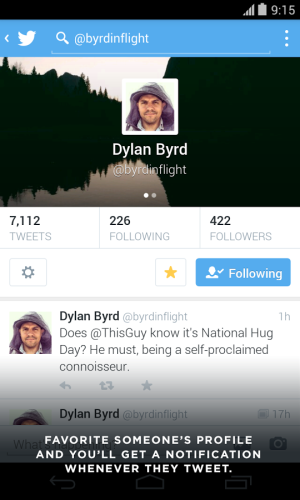 So that you don’t think we overlook the native Twitters app, we would like to make it perfectly clear that the original Twitter app is actually very good, especially for the newcomers to this microblogging platform. The application has no surprises, but in some cases that’s the way you want it. The user interface is fairly intuitive, and while it doesn’t offer much to the power users, many people wouldn’t bother with the advanced features. 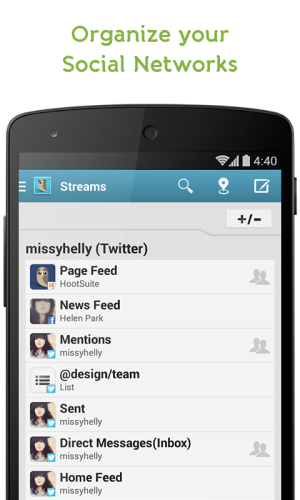 Hootsuite is one of the most powerful applications for Twitter on the Google Play because it allows users to manage multiple social network accounts in one convenient and streamlined user interface. Hootsuite can manage your Twitter, Facebook and many other social networks accounts, and as far as Twitter is concerned, this application is very comprehensive and omnipotent. It gives you some power features, such as shortening URL’s, scheduling your tweets and the like. In fact, the application is so multidirectional, it is best suited for business accounts rather than personal. As far as developers are concerned, they have created this app specifically for team collaboration.

In addition to the multiple features, Hootsuite gives users some powerful analytic capabilities to be able to streamline their use of the platform and interact with other users better. If you need to manage your business Twitter account, Hootsuite is definitely one of the most feature-rich applications out there. 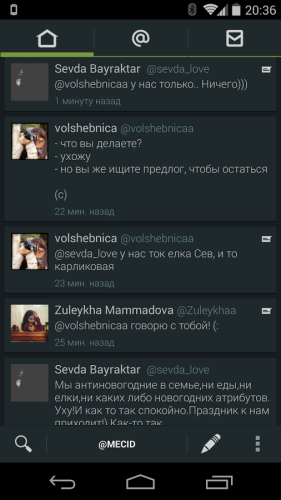 If you’re looking for something simple, check out this cleanly-cut and robust application. While it may not have as many features as other applications on the list, Robid does offer a very easy to use and smart user interface. In addition, it is customizable, and users have the freedom to change the theme while a large set of other settings are also customizable, which allows the users to take full control of the application.

Robid offers username auto-complete, upload of multiple images, push notifications and the like. The application costs $1.99, and if you’re after sleek design, intuitive UI and simplicity, check out Robid. 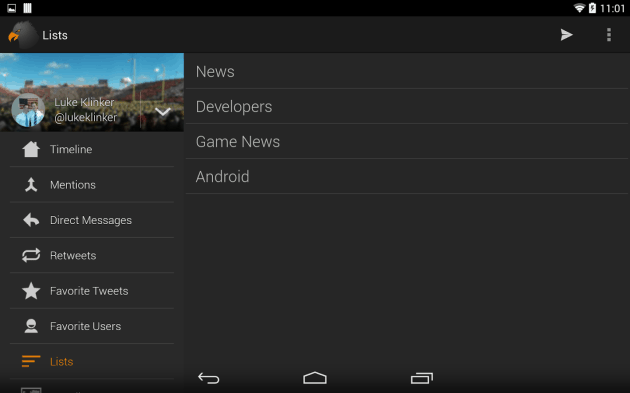 Talon is one of the newcomers on Google Play and offers an extensive list of awesome features that will set you off $1.99, but the application is well worth the money. Talon keeps getting excellent reviews since its launch, and for good reason – full screen layouts, the ability to attach locations to your tweets, the ability to customize the notification settings, and most importantly, the possibility to log in to 2 different accounts and more cool features make this application one of the best Twitter options there is.

The application is highly customizable both in terms of aesthetics and performance, which makes it a great alternative for power users. 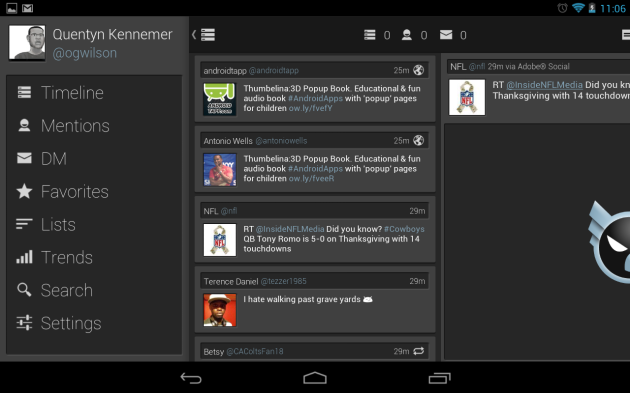 Falcon may turn out to be a perfect Twitter client for you if you manage to get your hands on it because Falcon has run out of Twitter tokens (Twitter only grants 100,000 users per application for third-party apps). The facts that it is one of the newest Twitter apps, and it has already run out of Twitter tokens state that it is one of the best apps for Twitter power users.

The application offers stylish minimalistic design and a powerful set of features under the hood. Falcon is very well organized into three main panels that offer all features any Twitter user can search for. In addition, the developers integrated YouTube’s API into their application, so you can watch YouTube videos within the app’s interface. This application is no longer on Google Play store, so the download link goes directly to the developer’s website. 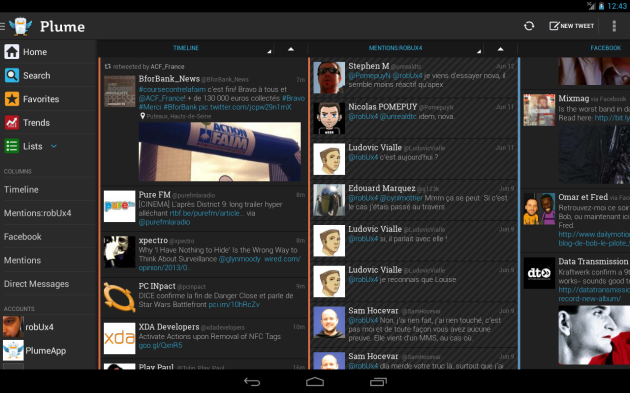 Plume sets a high standard for user customization and offers users ultimate control over their Twitter experience. Plume offers its users options to adjust color schemes for their timelines and Twitter friends, auto complete hashtags, usernames and preview pictures on their timeline.

Plume also has a lock screen widget, which means you can access your Twitter and control it from your lock screen directly. In addition, it supports bit.ly for shortening your URLs.

Obviously, all applications on this list are different, which provides you with apps that appeal to different needs. Some of them are great for novice users while others appeal to advanced and professional Twitter marketers. Depending on your personal style, you will be able to find the application that suits your tastes better, and we strongly recommend you try at least a few of them before you choose to stick to just one. Of course, it can only be done with the free applications, but we made sure you have plenty to choose from. Google Play store is abundant in Twitter clients, and the hunt is certainly worth your time. Let us know if we missed any worthwhile Twitter apps that you would like to see on this list.