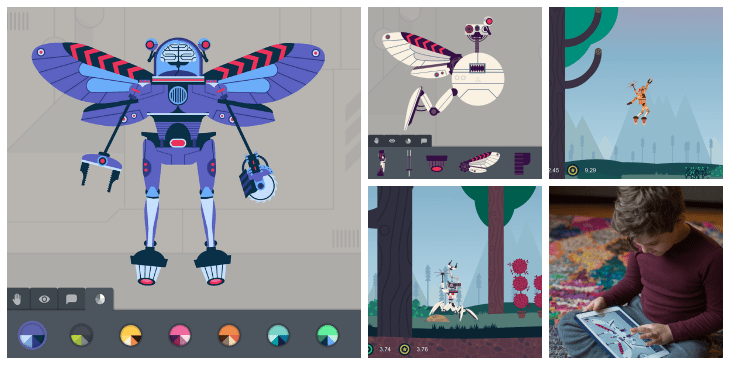 Released a little more than a month ago, the Robot Factory award winning educational app has generated an immense feedback from its users, young and adult. It’s the digital robot building workshop, which allows its users build, test and collect their creations. Offering more than 50 robot parts, the Robot Factory is a colorful, realistic, real world physics-based experimental app. Yes, it’s fun for the kids as small as 4 years old, but it’s also a great fun for the adult players. Why, if you still play Lego, you are sure to love the Robot Factory.

If you ever played Odd Bot, you know what it feels like playing with a cute, capable robot with funny legs and expressive eyes. Well, the Robot Factory lets you create dozens of different robots and watch them run, fly, glide, drive, fall, crumble, break, or on the contrary succeed. 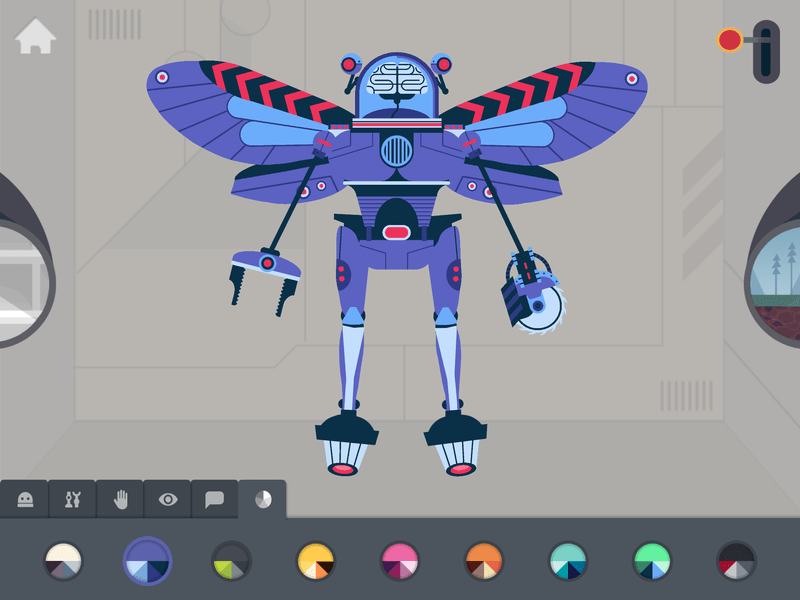 The amount of parts seems perfectly fit not to be overwhelming, but numerous enough to provide for ample experimentation and creativity. You have exoskeletons, monster feet, hooks, pincers, zephyr mechanisms, archytas wings, magnets, G-Force mixers and a whole list of weird names I don’t know what they mean, but they surely produce amazing effects and give your robots cool abilities.

Just like the Monument Valley last year, the Robot Factory gets great feedback from the parents, praising the app for being a wonderful developmental and educational tool, which is both accessible, challenging and fun to the point the parents want play with their kids, or selfishly on their own. And the app lets you create several accounts, name them and store your robots inside your own gallery, so it’s also great for the siblings sharing the same device. 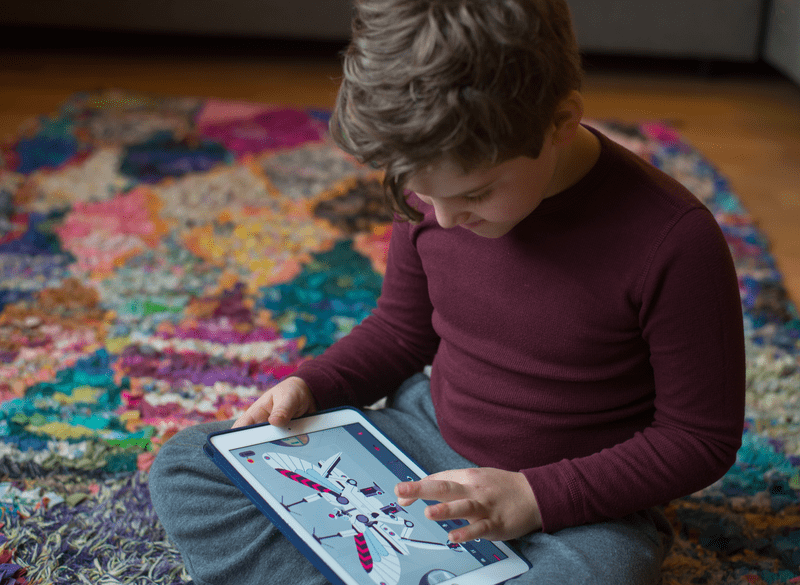 After a month of its release, the Robot Factory accumulated over a million creations, and the developers say they’re all different – lizards, butterflies, dancers, doctors, butlers, moonwalkers, spiders, samurais, villains, cats, wizards and the list goes on forever. The limit is your imagination.

The app received an update that lets the robots have a huge number of parts, so you can make it a multi-functional bot. By default, it lets you place legs where the head and arms were supposed to be – there is no limit or rules – you’re the Engineer here. 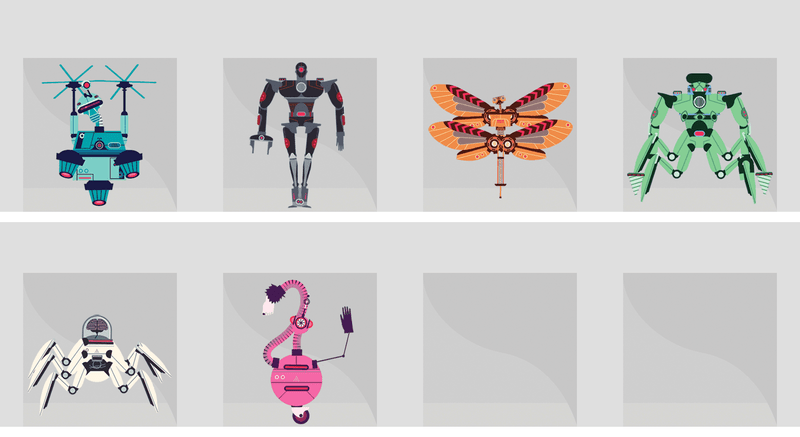 Another great feature is the app does not punish the beginning and young users whose first creations suck. After you’ve built the robot, you can test how well it can cross an area. The environments can contain traps, like stones robots can stumble on, or holes that can be the end of them, and the like. Nonetheless, the traps are not punishing, if not funny, and they give you the idea about how you can improve the construction next time. The physics of the game is perfectly natural, so you get the notion of gravity pretty well. Besides, all the mechanisms are realistic in their performance, and it feels like you’re playing with a real physical set of parts, watching how they work together.

Also, the try-out system lets you define how your child likes to play – creatively or competitively. Some children like to build robots that can go the farthest, other just like to create robots with style and personality. So, players of different mindsets and tempers will find a fun challenge fit for them. 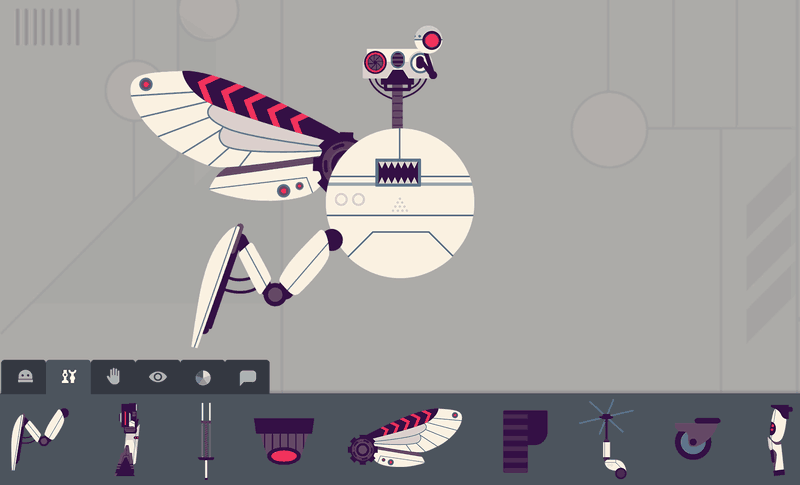 There are no levels, points, achievements or quests – it’s all very Lego style. You have the set of parts, and you build something, then test it, then rebuild it in a different way. It boosts your imagination without hurting your feelings when you fail. It gives you the ingredients, but you are the one making up a story with its purpose and characters.

The app is the first in the series dubbed Digital Toys, and the developer Tinybop already has a few trophies to boast off with its previous the Human Body app of the Explorer’s Library series, which was #1 on the App Store apps for education in 143 countries. The Robot Factory is also translated into a ridiculously huge number of languages, so anyone in possession of an iPad or iPhone, in any country can enjoy it.

The app is a treasure chest of cool perks. You can record your own sounds for your creations; color them the way you like by choosing among the pre-defined color palettes; try them out in real world environments; save them and collect them in your personalized robot showroom. The sound score is amazing, too, and the UI is super intuitive and kid-friendly. 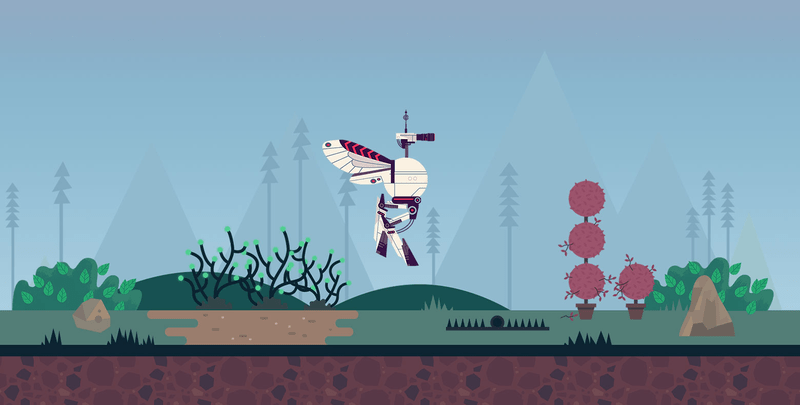 As I mentioned, you can create several profiles within the same app, name them and create, test and collect your robots in your own showroom.

The first time I looked at the Robot Factory I thought it looked familiar, and no wonder – the illustrator is Owen Davey, the artist behind my favorite Two Dots game.

Finally, what you see is what you get – priced at $2.99, The Robots Factory has no IAPs or ads – play all you want, and receive future updates, which must be awesome. The only fault I could find with the app is it’s not available for Android. Oh well, we live in a cruel world.