You are in the middle of something important, and suddenly you get a call from your boss, your wife, your son, or someone else who really matters to you; someone you don’t want to ignore and want to let them know where you are now. CallSnap is an app for Android smartphones designed to let users decline a call and let the person know you are not ignoring him or her by sending him a photo of what you are doing right now, or an audio file, or just a cartoon image. That way, whoever is on the other end of the line will not feel like you are blowing him or her off.

Yes, voicemails in both Android and iOS systems let unanswered calls get the “I’ll call you back” and “Can’t talk right now” messages, but CallSnap gives a touch of personality to your explanation why you are unable to receive that call right now.

We appreciate the newly updated version of CallSnap that now boasts of the audio recording feature. Slide CallSnap icon to the right when you are on the screen displaying an incoming call, and you will decline the call and redirect the caller to your voicemail. Then, CallSnap lets you record a personalized message for your caller, and embed it in a text message.

How is it different from voicemail, you say, especially if you are using Google Voice speech-to-text recognition? Well, the difference is pretty straightforward – while you can create a message using Google’s speech recognition software, the inaccuracies we often come across in such software are really aggravating when you want to type a fast message. Alternatively, you could send the caller a pre-set but custom text message, but doing that in the middle of something important can be a pain in the neck. In contrast, CallSnap audio recording lets you send a personalized heartfelt message in a matter of 20 seconds.

In CallSnap, you can use audio recording, illustrations, photos and other media files to explain to the caller why you are currently unavailable.

To use a photo reply with CallSnap, you should slide the app’s icon to the left on an incoming call, which then sends your caller to the voicemail and simultaneously activates your device’s camera. You can then snap a quick selfie and attach one of the pre-set texts to it, for example, “I am busy. Here is what I’m doing…” Your caller then receives a message “Busy right now… CallSnap photo on the way!” And the photo arrives within the next few seconds. 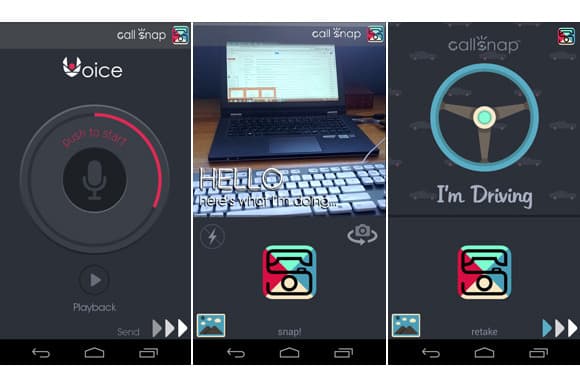 Those of you who appreciate fine cartoon art, we recommend you take a look at CallSnap’s gallery of cartoon images you can use to send to your caller when accepting the call is highly inconvenient. The cartoon images are labeled with texts like “I am driving,” “I am exercising” or “Family Time.” 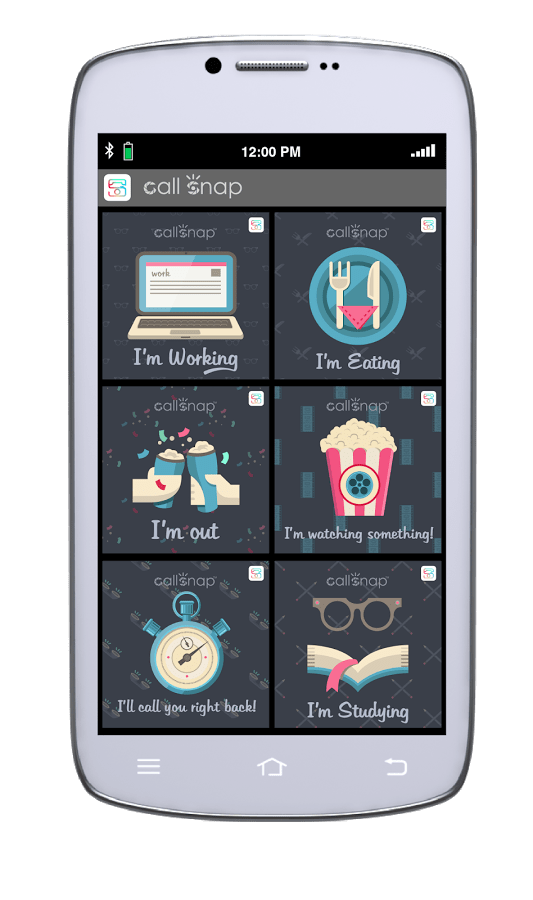 Michael Unetich, TIP Solutions president, the developer behind the CallSnap, says voicemail has been dying for years now, and many apps are available now to make the service more personalized, and fun to use. Unetich says CallSnap is an advanced way of handling the regular problem of declining messages from some of the most important people in our lives without making them feel cut out. The same goes to people who always insist on having a conversation while you are in the middle of a highly stuffed highway, and whenever you pick up the call to say you are busy they always manage to ask a thousand quick things that end up in a 30-minute conversation.

If you often catch yourself texting your caller trying to explain what you are doing and why you can’t answer the call right now, CallSnap may just be the right solution for you.

The only downside is you cannot use CallSnap if somebody is calling you from a landline.