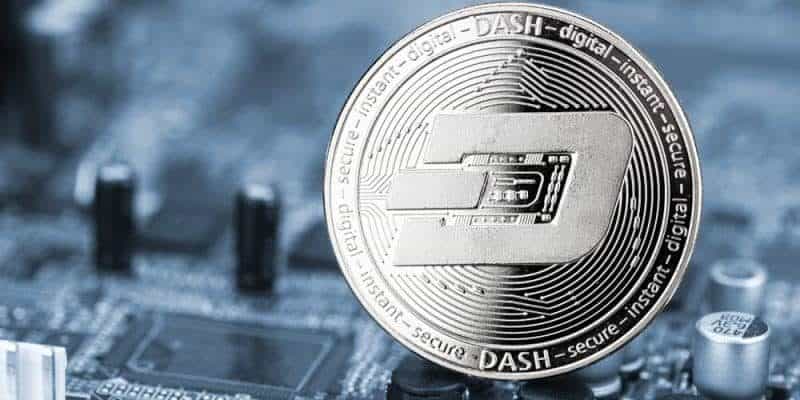 Bitcoin’s success has caused a rapid growth of the cryptocurrency industry and the investments right now are somewhere over $112 billion which is a lot even considering this year’s ongoing bear market.

The blockchain technology implemented by Bitcoin was the first step toward decentralized money but it was the first so naturally, there was and still is room for improvement.

Below, we will discuss in detail what is Dash cryptocurrency and how this promising alternative to Bitcoin works.

What is Dash cryptocurrency?

If there’s one thing Bitcoin didn’t manage to solve it’s private and anonymous transactions. For this reason, a new kind of cryptocurrencies called Anonymous Cryptocurrencies have appeared and Dash is one of them.

Dash describes itself as decentralized peer-to-peer electronic cash. The cryptocurrency is based on Bitcoin’s core code with new features added, including privacy and faster transactions.

Dash relies on its own blockchain and wallet infrastructure, and just like Bitcoin, it’s open-source. However, compared to Bitcoin, Dash as negligible transaction fees.

As I already mentioned above, Bitcoin’s transaction speeds are too high and certainly not optimal for regular transaction purposes.

If you look at the graph shown above you can see that even when you pay the lowest possible transaction fee you will need to wait for 13 minutes on average for the transaction to be processed.

Developer Evan Duffield came across Bitcoin in 2010 and while he realized the technology’s potential he did notice the lack of privacy and slow transaction speeds.

He didn’t lack ideas on how to improve Bitcoin but implementing them would have meant changing the core’s code, something that Bitcoin core members would never allow.

For this reason, on January 18, 2014, he decided to create his own cryptocurrency using the Core code. Initially, Dash was called Xcoin, which later turned to DarkCoin and finally rebranded to Dash which is short for “Digital Cash”.

When Dash was launched, 1.9 million coins were mined in the first two days which is approximately 10% of the total supply to ever be issued.

Evan Duffield said this happened because of a bug created when the Litecoin code was forked to create Dash which altered the mining difficulty.

The issue was addressed right away and Duffield came up with two possible solutions: to relaunch the coin or perform an “airdrop” to make the initial distribution broader.

Nevertheless, the community was overwhelmingly against both proposals and most of the mined coins were later distributed on exchanges at low prices.

The currency has a dynamic block reward that decreases by 7.1% every year. The average block mining time on the Dash blockchain is 2.5 minutes which is four times faster than Bitcoin’s.
At the time of this writing, Dash total market cap is approximately $614 million and it is ranked as the #16 most valuable cryptocurrency by market cap.

If there’s one way to truly understand a cryptocurrency is by looking at the features that make it stand out. As a result, let’s see the most important features of Dash.

Full nodes contain a real-time full copy of the blockchain (something which regular nodes do not), and are practically servers running on a P2P network. They can connect to 124 other nodes compared to regular nodes which can only connect to 8.

As you can imagine, these nodes require significant maintenance and management. Because of they, their number hasn’t been increased as much as it should which leads to longer block propagation times.

Faster block propagation is necessary for miners and Dash came up with a superior inventive system to increase the number of full nodes. According to the Dash whitepaper:

“These nodes are very important to the health of the network. They provide clients with the ability to synchronize and quick propagation of messages throughout the network. We propose adding a secondary network, known as the Dash Masternode network. These nodes will have high availability and provide a required level of service to the network in order to take part in the Masternode Reward Program.”

To put it briefly, masternodes have all the capabilities of full nodes but they also provide additional services such as PrivateSend, and InstantSend. If you’d like to learn more about masternodes, please check out our masternodes guide.

To run a masternode on the Dash network you need to invest at least 1000 Dash. This sort of investment is needed because it will incentivize the masternodes to work in the network’s best interest and they will receive their rewards as dividends on their investment. In fact, Dash is the first cryptocurrency to implement masternodes into their protocol.

As a result, masternodes create a second tier network based on a Proof-of-Service algorithm on top of the first tier network of miners.

The two-tier system ensures Proof-of-Service and Proof-of-Work consensus algorithms work in conjunction on the Dash network.

A running masternode is in charge of governance and also several functions including InstantSend and PrivateSend. Besides the initial investment, running a masternode requires a dedicated server and IP address, as well as plenty of free space to store the entire blockchain. Because running a masternode is a costly endeavour, node operators are rewarded usually with 45% of the block reward. 10% is used by the decentralized budget system to fund Dash-related projects. The return on investment is approximately 15% so you will earn around 150 DASH from running a masternode for a year.

Right now there are a little over 5,000 masternodes so Dash is highly decentralized and makes it impossible for one user to control sufficient masternodes to deanonymize transactions. Also, assuming one would manage to achieve such control, the massive investment required would be enough reason to work for the network and not against it.

PrivateSend is one of the functions performed by masternodes and it was designed to maintain fungibility by swapping coins among users to break the traceable history of the coins.

CoinJoin is a concent used by PrivateSend so to understand the latter we will need to analyze the first.

CoinJoin is an anonymization method proposed for Bitcoin transactions by Gregory Maxwell. It relies on this idea:

In a joint payment, the input and the output can’t be linked in a single Bitcoin transaction. This ensures none of the third parties know the exact flow of the transaction.

The CoinJoin method was created to solve the lack of fungibility, one of the most fundamental problems of Bitcoin transactions. According to Investopedia, fungibility is defined as “a good or asset’s interchangeability with other individual goods or assets of the same type.”

So how can you tell what’s fungible and what’s non-fungible? Let’s say you borrow $10 from a friend. You can give them back another $10 bill but you could also return two $5 bills. Either way works. In this scenario, the dollar has fungible properties.

On the other hand, if you were to borrow a friend’s car giving them back another car is not acceptable. Even if you return a different car of the same make and model, that still wouldn’t work. As a result, in this example cars are non-fungible assets.

In the cryptocurrency world, fungibility works pretty much the same way as it does for physical assets. For example, Bitcoin’s ledger is available to everyone which means that any of us can see the entire history of transactions stored on it and also the trail of each transaction.

This means that if you own a Bitcoin that was once used for illegal purposes like financing terrorism or buying drugs this information will be forever stored on the ledger and accessible to everyone. This practically “taints” your Bitcoin.

For certain Bitcoin exchanges and service providers, the “tainted” coins will be worth less than “clean” coins. This destroys fungibility and is one of the most controversial aspects of Bitcoin.

CoinJoin does have several weaknesses but Dash realized the potential of this method in making digital assets more fungible and implemented PrivateSend, a coin mixing service based on a modified CoinJoin method.

As the name suggests, PrivateSend ensures transactions are private by adding multiple identical outputs from several users and then sending them to multiple outputs. This makes the transaction flow untraceable so the transaction remains private.

According to the Dash whitepaper:

“PrivateSend uses the fact that a transaction can be formed by multiple parties and made out to multiple parties to merge funds together in a way where they cannot be uncoupled thereafter. Given that all PrivateSend transactions are setup for users to pay themselves, the system is highly secure against theft and users coins always remain safe. Currently to mix using PrivateSend requires at least three participants.”

As you can see in the image above, 3 users submitted their denominated funds for mixing. Then, the users will pay themselves back using randomly ordered new outputs.

PrivateSend is limited to 1000 DASH per session so when larger transactions need to be performed it will use multiple sessions. PrivateSend runs in a passive node to simplify the user experience and to make sure timing attacks is difficult.

You should also know that every PrivateSend session is limited to three clients which means that each user has a 1 in 3 chance of following a transaction. To further anonymize transactions the funds are sent through multiple masternodes.

The need of faster transactions originated from Bitcoin’s slow transaction time. Before anything else, let’s analyze how a Bitcoin transaction works.

For example, Alice wants to send Bob 1 BTC. This creates a message stating her intention to perform the transaction that is sent to the miners. Then, the miners validate the transaction and add its details to the blocks and Bob finally receives his 1 BTC.

Miners need to validate the transaction because they need to make sure it is indeed Alice who performed it and also to prevent double spending.

Double spending means using the exact same coin on multiple transactions at the same time. Miners prevent this from happening as in a blockchain transaction only take place when miners add the transactions to the blocks they have mined.

For each block mined in Dash, the miner sends the hash of the block which is then used to select a quorum of 10 masternodees.

From the moment it is selected and until the next block is mined (approximately 2.5 mins), the quorum becomes the “InstantSend authority” of the Dash network. Assuming Alice wants to send Bob 1 DASH via InstantSend, the selected quorum will lock in the inputs of the transaction and communicate the input details.

The locking prevents double spending. Should Alice want to send the same 1 DASH to Charlie and start a double spend the network will reject the transaction as the inputs have already been broadcasted.

Both sender and receiver will receive 5 confirmations of the transaction within a second which ensures that it was successfully performed.

Where to buy Dash?

Since Dash is a promising cryptocurrency there are quite a few services and exchanges that allows you to purchase it. Some of the most popular ones are:

All of these exchanges support the DASH/BTC pair and depending on which service you decide to use there might also be other pairs available such as DASH/ETH, DASH/USD, and DASH/USDT.

If you plan to purchase DASH you will also need a wallet to store your coins in.

Here are some of the most popular mobile, desktop, and hardware wallets you can use to store DASH coins.