Bitcoin’s success has opened the path for a wealth of other crypto coins, tokens, and blockchains and while that’s amazing when it comes to new technological applications, it also complicates things. Right now, there is no decentralized, effective solution to exchange value between all these digital assets. Wanchain was designed as a solution to these problems.

Wanchain aims to provide a unified and decentralized framework that implements cross-chain transfers across existing blockchains, allowing an efficient exchange of the various assets present on today’s market.

The platform relies on cross-chain smart contracts to connect all digital assets which are currently isolated within their own chains. It was designed so any blockchain network can integrate with Wanchain and connect various ledgers, as well as transfer assets between ledgers with very low fees. Even more, developers can use the platform to create baking apps for guiding the flows on the chain and keep the entire operation decentralized.

Nevertheless, Wanchain can also operate independently as it provides support for smart contracts and has its own virtual coin, as well as privacy protection for transactions.

How does Wanchain work? 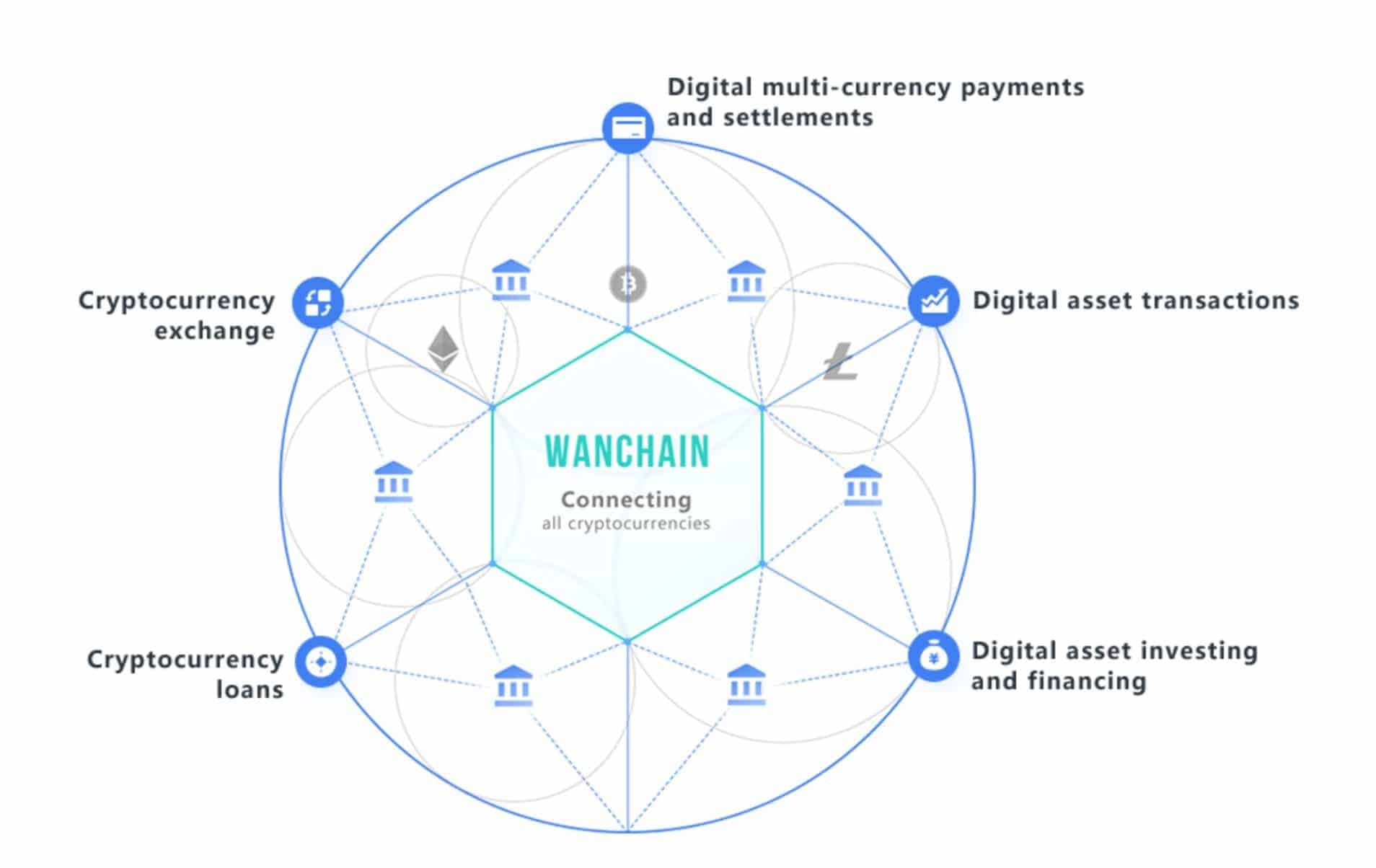 Wanchain was forked from Ethereum, but it became a stand-alone blockchain and the platform’s coin (Wancoin, WAN for short) is not an ERC20 token. While the platform consists of multiple parts the most important one is the cross-chain communication protocol.

Smart contracts are used by the cross-chain communication protocol to exchange assets between Wanchain and other chains. Wanchain will use Ethereum’s Proof-of-Stake (PoS) consensus algorithm and based on this, three types of verification nodes are used for network maintenance and splitting transaction fees: vouchers, which are cross-chain transaction proof nodes, validators which are general verification nodes, and storemen, locked account management nodes.

The Locked Account Generation Scheme is being used by the Wanchain platform to secure keys and funds for all involved parties. That’s how the Storemen are used to manage and maintain the key shares of the locked accounts for exchanges.

Decentralization is increased as Wanchain generates locked accounts through computations involving multiple parties. It’s also a more stable platform as transactions can still be executed even with the minimum number of shares, should some of the Validators be offline. Any transaction with a locked account is performed via the original chain. In other words, any chain can integrate with Wanchain with no need for new transaction types or validators.

Last but not least, it’s worth mentioning Wanchain is among the first blockchains that adds privacy within smart contracts. Ring signatures and one-time address generation are used to anonymize your transactions via the Wanchain platform.

The Wancoin (WAN) token is being used as payment for transaction fees via the Wanchain network. Each transaction requires a certain amount of WAN and the cross-chain verification nodes require payments as WAN security deposits to perform transactions.

While Wanchain was designed for exchanging only digital assets, it works like a regular bank in every other way. Any institution or individual can use the platform to perform transactions, digital currency exchanges, make payments, borrow money, make investments and so on. However, Wanchain also has more complex applications based on the essential functions such as peer-to-peer lending companies, multi-currency credit cards based on digital coins, as well as crowdfunding. Over time Wanchain plans to expand its functionalities based on what kinds of new digital currencies appear on the market.

The team behind Wanchain

Now that you have a pretty good idea how Wanchain works, you might be wondering who are the individuals behind the project. The Wanchain Foundation is based in Singapore as a nonprofit that stands behind the platform’s open-source community.

The founder is Jack Lu, a graduate of Peking and Ohio State universities. He is a blockchain entrepreneur and technical expert who also founded Factom. The team includes other blockchain entrepreneurs, senior engineers, and developers, as well as experts in various fields such as cryptographic algorithms and software development among others. Most team members have at least a decade of experience in their fields of interest, as well as with other startups.

Wanchain ended its ICO and it’s now being traded on the popular exchange Binance.

You can store your WAN on the exchance if you want to do some trading or swings but we recoomend holding WAN in the Wanchain wallet which will soon support various other currencies. The wallet is available for all major platforms, specifically Windows, Linux, and Mac.