Now that Dungeon Hunter 5 has been out for a little over a week, we’ve all had some time to play the game and get a feel for what it has to offer. Even though it appears to be a stripped down version of it’s predecessor with a lot less content variety, there’s still a very lengthy campaign, and the Strongholds PvP mode is simple but quite addicting. Below, we’ve got a handful of useful tips that will help you in your journey through the campaign, as well as in the Stronghold arena — so take a look if you’re struggling or trying to do anything you can do improve in DH5.

Not only can you get a substantial amount of quartz and coins from attacking other players’ strongholds, but you can also get a lot of fusion boosters to help improve your equipment. Because of this, you should always make sure your Stamina is recharging, and that you are fully depleting it prior to getting a level-up (which will fully re-charge it). Your goal should be to score as many trophy points as you can, so you can move up to a higher level league where the rewards are even greater. 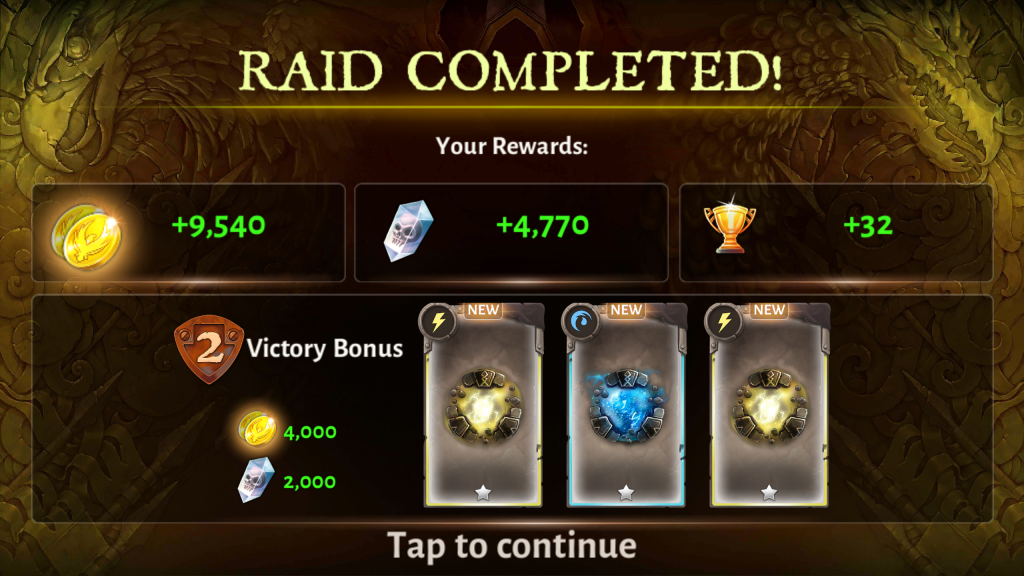 Doing stronghold battles regularly will also help aid your campaign progress, as the fusion boosters will make your gear stronger, thus making the levels easier to complete. Make sure you don’t neglect your minions though, as you’d ideally like your own stronghold to be able to defend against other players — which becomes more challenging in higher level leagues. You should regularly test your stronghold to see what areas could be improved, and then evolve or swap those minions in that area.

Personally, I like to put my most powerful minions on the front line, so they are all engaging my opponent at the same time. Then, throw some ranged minions on the sides so you can get some extra damage from a distance. I’ve noticed that the two minions that are diagonal to the starting point are usually the first ones to die, so maybe put some more expandable ones in these spots.

A major part of the game is improving the gear you already own, and to be honest, you likely won’t be changing your equipment too regularly in the game — at least not the first few days/weeks you are playing. If you are just starting out, I would recommend focusing on improving one single weapon and one single armor set. Although it might be tempting to have a second strong weapon, it will make things easier for you if you have one weapon that greatly exceeds the recommended damage output. 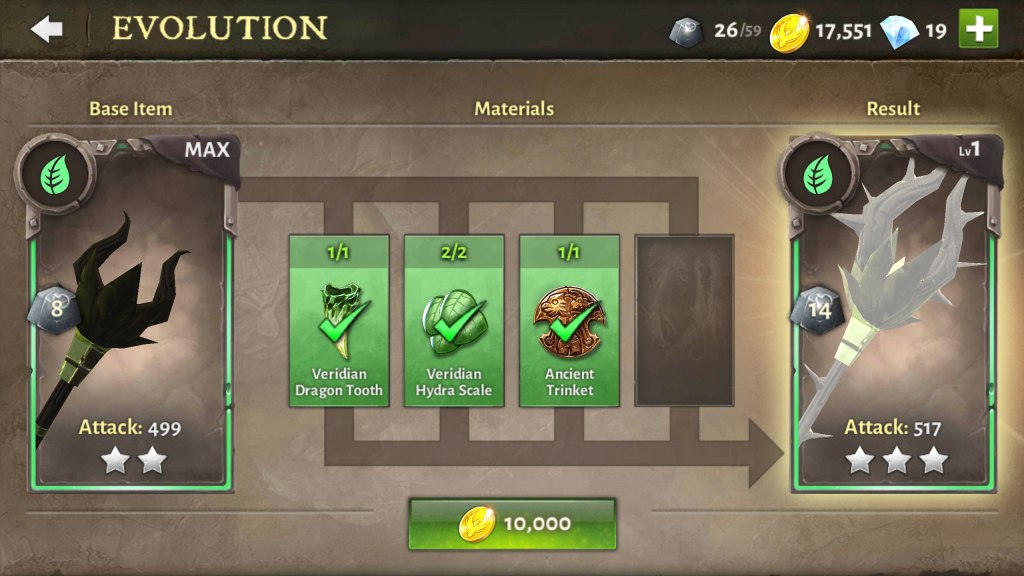 I recommend only using fusion boosters to improve your gear and abilities, and simply selling any junk gear you acquire. Fusing one star gear into your equipment isn’t going to yield very much EXP at all, and it can be quite costly if the item is already enhanced quite a bit (as the item’s current “level” goes up, so does the cost to enhance it). You’ll hardly get any coins or quartz for selling one or two star minions and equipment, but it frees up inventory space, and the difference between gaining a couple hundred coins and losing a couple thousand can’t be ignored.

The individual stages in Dungeon Hunter 5 are quite linear, but the campaign progress is not. You start out on stage one of normal, with hard mode opening up around stage 5, and expert mode opening up around stage 20. However, you probably won’t be able to complete expert stage 2 until you complete stage 25 on hard. A good way to measure whether or not you’d be able to complete a certain stage at a certain difficulty, is to look at the energy cost and XP gain, and compare it to levels you’ve recently completed. 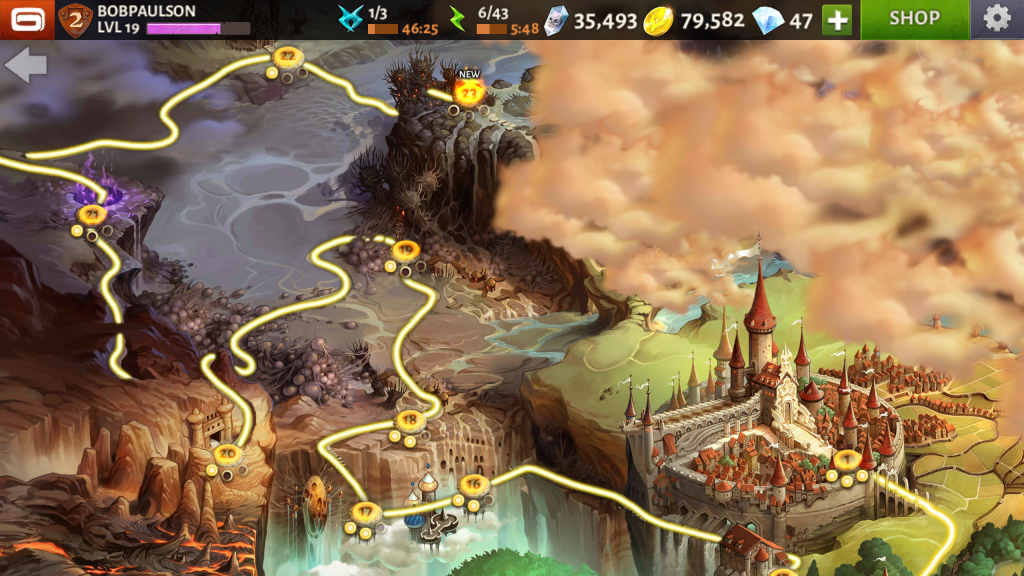 Failing a mission can be devastating to your progression, so it’s really important you know for a fact you can complete the mission at hand before you start it. Sometimes you might want to farm potions on a previous stage to help strengthen that guarantee. The reason its so important, is that you can usually level up without ever waiting for energy to be restored, and since that is also replenished upon level up, you never need to play the “waiting game” of sitting there while your energy or stamina regenerates.

I’m the kind of player that hates spending money on freemium games, but Dungeon Hunter 5 makes that really difficult at times. Fortunately, you’re given four free gems every time you complete a new mission on Normal mode — this doesn’t apply to Hard or Expert difficulties. If you fast forward a bit, you’ll likely be around mission 30 at level 25, with a total of ~120 gems accumulated. At this point, I’d recommend you open one gear chest, and spend the rest on bag space, which equates to about 35 extra inventory spaces.

Some people recommend simply dumping all gems into bag space, which is a fine idea if you are having no problems progressing, but one issue I ran into was the dreaded ancient trinket. This item is required to evolve pretty much any two star armor, and is available only in Wednesday’s daily dungeon. It was Thursday when I figured this out, so it was either wait six days before ever improving my armor, or take a risk on the gear chest — which did in-fact pay off, and I got a 3 star armor piece.

Allies, Events, and Everything Else

Every time you do a campaign mission or an event, you get to bring with an “ally” which is either a random person or someone from your friends list. This is an AI controlled player with the stats of that particular player’s character, so it can definitely be beneficial to have strong players on your friends list. Having active players is also nice, not only because they’ll improve alongside you, but they will also earn you bonus bounty tickets whenever they use your character as an ally. Even though the bounty chest has garbage gear, you can get health potions, or some decent abilities like Ten Strikes if you don’t already have them. 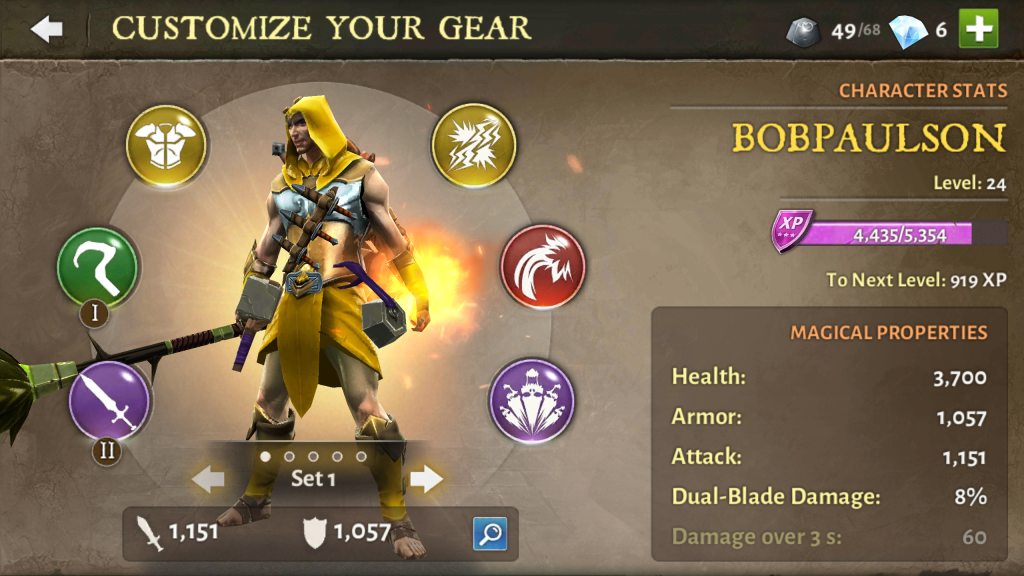 Something you’ll really want to keep an eye on is events. As I briefly mentioned early, the daily event for Wednesday is the only place you can get an Ancient Trinket, which is required to evolve almost any two star armor, as well as various other equipment. Other daily dungeons can be a great source of fusion boosters, as well as other evolution equipment such as hydra scales. Just be careful when trying out higher difficulties, and use the energy cost/xp gain rule of thumb in this situation too.

Thanks for checking out these Dungeon Hunter 5 Tips & Tricks! Be sure to share your own tips in the comments section below!