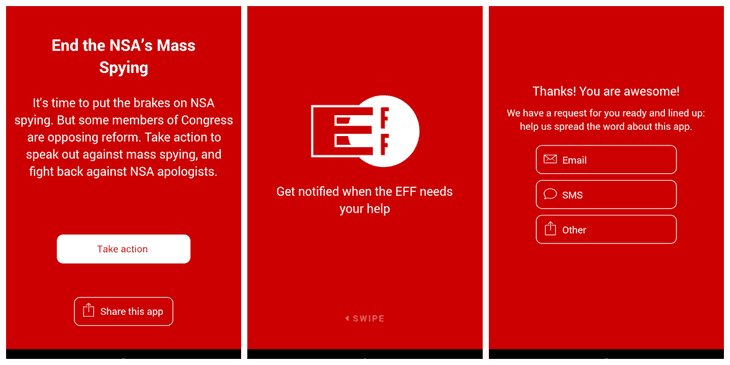 Here is good news for the active citizens participating in their country’s social and political life – Electronic Frontier Foundation launched an Android app just for you. The app will notify you of the upcoming events, initiatives, petitions and everything that is going on under the EFF umbrella. So, if supporting the right cause of protecting user privacy and security against the greedy and intrusive corporations, or the government for that matter, sounds like your cup of tea, get the app right away.

Functionality is Scarce for Now

It does not do anything but assembling information about EFF activities and bringing them all in a clean-cut, user-friendly interface, except for a slew of social media apps integration along your email, so whenever you feel like joining and bringing your friends, you can share the news straight from the EFF app.

The app also has a quick connection to the EFF action center, where you can speak your mind and participate in protecting digital rights of citizens. You can set up a login and password for the action center, if you wish to comment.

The good news is the Android app is available worldwide, in any country, even where the oppressive regimes are banning encrypted message apps alongside other apps like Twitter and Facebook (truth be told, banning Facebook can’t be bad, but it’s certainly anti-democratic).

No iOS Version for Unidentified Time

The bad news is there is no iOS app, and EFF is not to blame. Apparently, EFF and Apple have had it the rough way, with EFF strictly opposing Apple’s developer agreement and DRM policies:

“After rigorous review of Apple’s Developer Agreement and DRM policies, we decided we couldn’t stomach them.”

Here are a few brief points EFF highlighted that are bad for users and developers alike:

EFF also minds the ban on jailbreaking and Apple’s stance on reserving the right to kill any app at any time without explanation. It is known for a fact Apple can remotely disable apps even on the devices they’ve been previously installed, as was the case with the Brazilian government banning the Secret app for being a bullying haven.

EFF believes these and many other terms behind Apple’s developer agreement jeopardize users’ security and leave them exposed to censorship and snooping.

Finally, Digital Rights Management form puts restrictions on what developers can do with their apps, which also relates to user customization.

“Developers should demand better terms and customers who love their iPhones should back them.”

EFF action center is available from any mobile browser, so if you are on iOS, you can still follow the link and sign the petition.

Android users can get the app on Google Play for free, but know that for now it does not do much but notifying you about the petitions and motions EFF promotes.

Finally, if you are a developer and wish to contribute new features to the app, you can get the source code at GitHub and make something new with it.