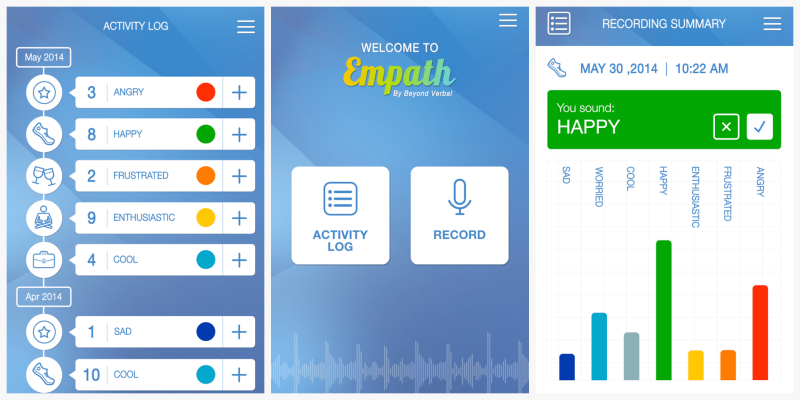 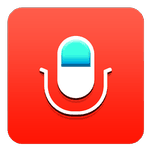 Last year, we wrote about Beyond Verbal’s breakthrough in the sphere of emotion recognition and tracking based on voice analysis. This is the technology that analyzed Steve Jobs’ last interview and defined he was depressed and disappointed, or, according to its own polite wording, his emotions were ‘loneliness, fatigue and emotional frustration’ while pres. Obama’s speech on surveillance report resulted in “aggression, survival and rage.”

Last year, Beyond Verbal launched a simple mobile app on iOS and Android that analyzes your mood, and it was called Moodies. This time around, the folks at this successful Israeli start-up who have secured a multimillion funding last year, are launching a more complex, cloud-based app that will analyze your emotions based on the tone your voice.

You may not know some things about yourself, yet, but the app will catch the slightest tones of depression, or on the contrary, excitement that may tell you ahead of time which way the wind of change is blowing. You may think you don’t really need it, but when it comes to coping with “troubled” teenagers, or a secretive spouse, you may use this unique app to get a sneak peek at their emotional state and help them, or even prevent a disaster. 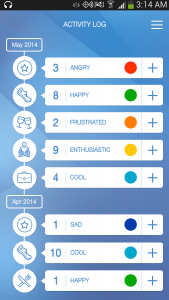 The app is dead simple in use – download, install, choose an event type from a short list that includes Sports, Working, Eating, Socializing, Resting or Other and start talking. The app will record and analyze your voice based on its know-how technology, with the engine in the cloud. When you have your map ready, you can verify the dominant emotion by ticking a box next to it. This way, you will have data to compare the next time you make a recording about a similar event.

It may be overly simple in its UI interface and lacks in the “fun” factor, but if you have a specific scenario that might need such a peculiar tool that analyzes emotions based on voice, Empath may do you good.

This technology is of great interest to marketing and telemarketing companies, but truth be told, giving those the possibilities to analyze emotional state of the people they call to sell things seems unethical, and I am sure in a couple of years we will see EFF examine such practices. 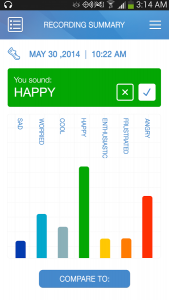 On the bright side, you can have Empath as a wellness companion for your entire family to keep tabs open on their emotional well being. Just like Boyfriend Log App tracks a woman’s calendar in retrospective of her relationships with men, Empath can help you filter out destructive patterns.

Say, you keep a diary of sorts in Empath, and dictate a couple of minutes into the app for a set period of time after significant events in your life. For example, you have a girlfriend/boyfriend, you go to medical school, and visit Alcoholics Anonymous, or cooking classes. In the medley of an eventful life, it is sometimes difficult to see patterns, especially when they are your patterns, not someone else’s you observe unemotionally.

So, when Empath has enough data on those events, you will be able to see which events are the most stressful, or on the contrary, the most beneficial for you. It may come as a surprise that on a scale of harmfulness, your cheating girlfriend has caused you more stress than Alcoholics Anonymous.

It is a technology with 20 years research behind it and a few patents. It enables the cloud-based engine analyze the slightest shades of your emotional state based on the tone of your voice, irrespective of the language you speak. You don’t need to go into the depths of self-analysis while describing events – just talk about them into the microphone and Empath tells you how you really feel about them.

In the end, it creates logs and charts of your emotions grouped into seven basic ones that include Angry, Frustrated, Enthusiastic, Happy, Cool, Worried and Sad. These, in their turn, have over 400 complex sub-variations. When you are done speaking, the app automatically analyzes the data and creates charts of your emotions and maps out the prevailing groups. The app then keeps a track record of your emotional states and predominant groups in a digital diary that includes the activities, their dates and times, as well as the emotional definitions.

Thus, you can track and compare your emotional state across a lengthy period of time (from daily, weekly to monthly) and find the patterns you otherwise could not see. 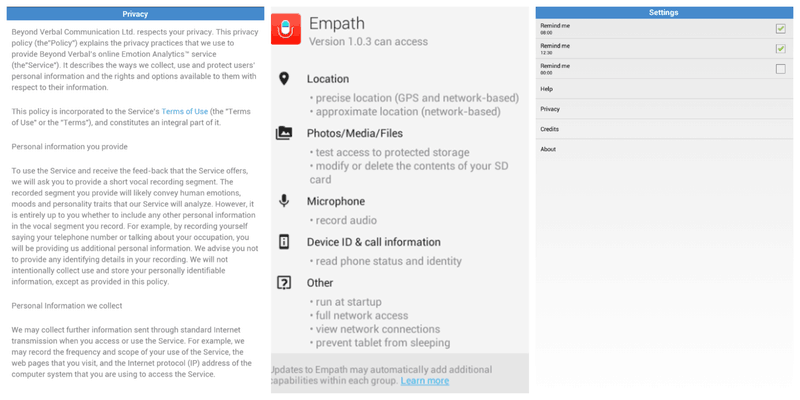 Overall, I see a big future for Empath in the niche of health, wellness, and self-awareness. However, there is a nagging feeling the power of such technology gives too much control over the person using it, if it (the control) should land in the wrong hands, which always seems to happen with technology.