Social networks have become a phenomenon of the 21st century and the rise of Facebook, Linked In and Tweeter have made users flock to the Internet more than ever. However, users’ real identities are more or less attached to their activities and comments that are publicly available. Some users have faced the drawbacks of displaying too much of their opinions and private life online, while others document their lives instead of living them. Comments, likes and feedback have become the merit and evaluation of quality for everything – images, opinions and worth of human lives.

Nevertheless, there are instances when we want to express our opinion without fearing our social circles backlash. Sometimes, we need to express our true thoughts without being afraid of damaging our reputation and the reputation of our family. There are two seemingly new applications that are willing to give you a taste of online anonymity.

Whisper, Santa Monica, California-based startup and Secret, a San Francisco-based startup offer users an unprecedented opportunity to express their true thoughts and feelings without being attached to their real names. Users of these apps can make those online revelations visible to anyone who’s logged in to the free services.

Social organizations, like child safety advocates, question the reliability of the services and wonder if the companies can actually guarantee the anonymity of their users. Their main concern is if the services could be used against the users to identify them or bully teens.

On the other hand, the networks devotees argue that anonymity grants a free means of self-expression. “There is a real desire to be more authentic online,” said Roelof Botha, a Sequoia Capital partner who invested $21 million in Whisper last year. “Most people have more to say than just, ‘Here I am on the beach looking great.’”

Launched in late 2012, Whisper is about talking to complete strangers. Whisper users post short messages on generic photos offered by the service, and reveal everything they want to say anonymously. The number of possible revelations is limitless and people post about everything from professional hardships, “as a teacher, I’m not supposed to have favorite students, but I definitely do,” to problems in the relationship, “my husband and I would make better friends than spouses.”

The messages on those anonymous networks may be heartbreaking and ignite dozens and hundreds of comments, feedback of support and love from complete strangers, for example, someone struggling with how to express their nontraditional sexual identity. Whisper claims that 3.5 billion page views are generated every month. Its users are mostly the younger generation aged from 18 to 24 years old, and stay on the network of an average of 25 minutes a day, which equals to a typical Facebook visit.

The developers behind Whisper position the service is an alternative or a counterpart to Twitter, where each user’s popularity depends on the number of his followers. The developers claim they’re not planning to charge user fees or sell ads on the website. “You can post something on Whisper, and if it’s interesting, couple of million people will see it,” says chief executive officer at Whisper, Michael Heyward. “Everyone has a voice.”

The service categorizes messages into popular, latest, nearby, and featured. Under an anonymous nickname, users can post their comments and messages publicly, attaching their own posts or even sending private messages to other users. The service’s editors seem to promote messages that are provocative and infuse discussion. For example, one message claimed that Gwyneth Paltrow was cheating on her husband that ignited fierce discussion in February. The website management claimed they only promoted the message because they knew it was “100% not false,” and they want to promote provocative storylines. Potentially, Whisper could turn into a giant news organization that attracts anonymous whistleblowers from all over the world. 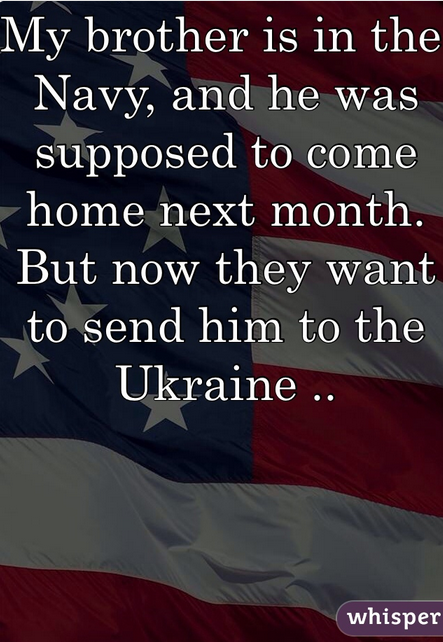 Secret is very similar to Whisper and allows users make anonymous confessions live overlaying images, but it has a somewhat different take on how it shares these anonymous messages. Secret taps into users’ contact lists instead. It went live in January and is available for iPhones and iPads only so far. As you scroll vertically, you see the anonymous messages that have been read or written by your contacts and in some cases contacts of your contacts. Thus you get more personal effect, after all, how difficult it is to recognize the writings of your loved ones? As a result, you are left pondering who in your social circle could have written certain provocative messages. Developers behind Secret, former Google employees, “wanted to get our friends to just say what they are thinking and not to hold back.”

Secret is more restricted to location, and since it is only available for iPhones and creates a network of closely connected people, currently it revolves around Silicon Valley and personal explicit revelations. “I am a VC, and I’ve slept with two different cofounders in my portfolio,” says one post. “I’m confessing because I now think I have a problem.” 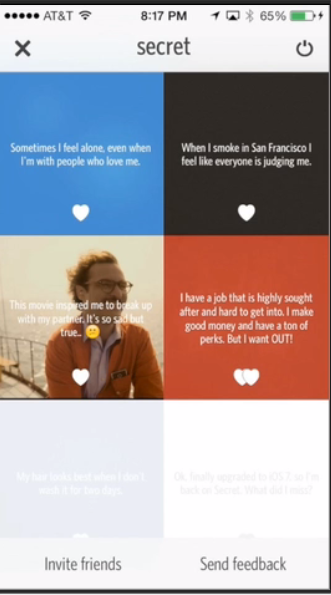 The app has ignited a lot of attention in the Silicon Valley and the tech community, not just thanks to confessions, but also because of the backlash from inside of the well-known tech companies, including Yahoo and social network Path. In February, one anonymous user claimed he was an Evernote employee, and said that the company might be acquired this year. Evernote denied the rumor of acquisition, but you can imagine the potential implications and the possibility of being disclosed in this anonymous, yet very personal and intimate social network.