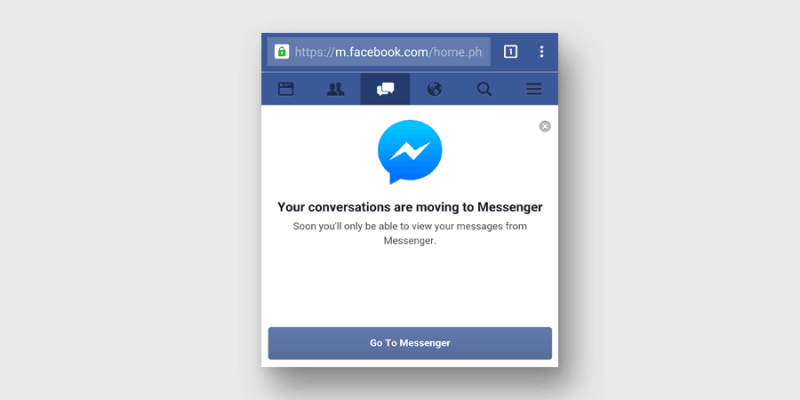 Well, this is pretty stupid, right? With Facebook and its Messenger app being so battery-hungry plenty of people have been relying on the web version which covered both social updates and chat needs.

Now, Facebook came up with the ‘brilliant’ idea to push Android users into downloading their Messenger app. If you visit facebook.com from an Android device and try to access the message tab, you will be taken to Messenger’s Play Store page, and if you try to return to the previous screen, you will see the following message for a few moments:

“Your conversations are moving to Messenger. Soon you’ll only be able to view your messages from Messenger.” For now, this is only happening on Android mobile devices, with iOS and Windows Mobile users remaining unaffected. However, we can only assume Facebook will only start to promote their Messenger apps more aggressively, and the other mobile platforms won’t be spared.

These attempts have not been received well by the users, as obviously if someone doesn’t have the Messenger app installed already, it is for good reasons. On top of that, we already have plenty other chat apps we can communicate through, like Skype, WhatsApp, Viber, Telegram, Google Hangouts and let’s not forget the good old email.

What do you think of Facebook’s recent attempts to force Android users into downloading the Messenger app?

Share your thoughts in the comments section and don’t forget to follow us on  Facebook, Twitter and Google+ to stay up to date with the latest apps, games, guides and everything Android, iOS and Windows Phone.