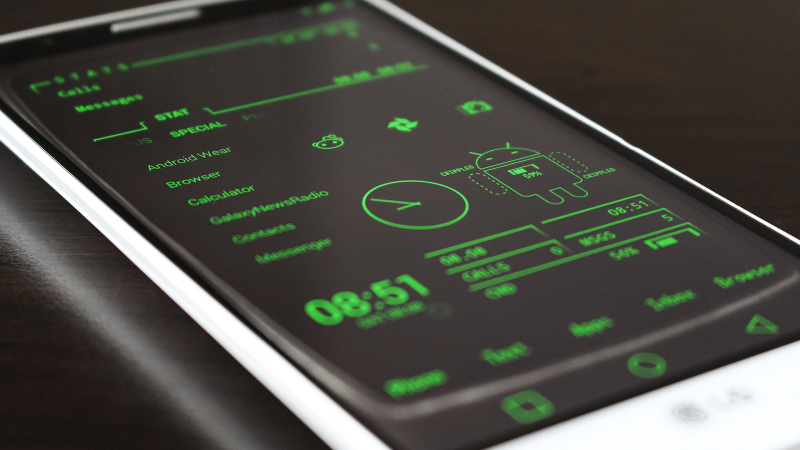 I don’t remember the last time I had so much fun customizing the looks of my Android, being the traditionalist in all things UI. I like my things where I am used to finding them, and I like them the way I remember them, so changing icons, widgets and layouts is not my thing really. But! In the wake of Fallout 4 release early this November, the Fallout fans are going through that special period in their lives when everything green sings Fallout to them. Enter PipTec. 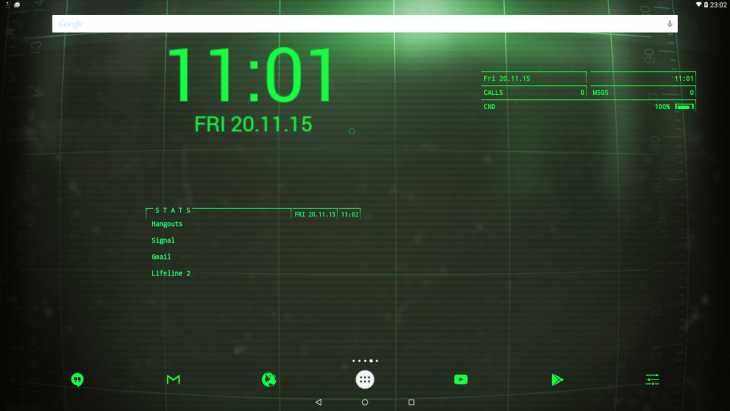 Coming from an independent graphic designer, this theme turns your Android device into a Pip-Boy. Those of you who aren’t a part of the Fallout fandom couldn’t probably care less about what Pip-Boy is, but you might as well dig the looks of this theme. By the way, a Pip-Boy is a personal information processor, a smartwatch of sorts but on steroids that sports tons of super-duper features and capabilities modern smartwatches haven’t gotten to, yet, but it’s a fantasy gizmo. Yet, nothing could be more real that a gamer’s passion. I, too, feel I am enjoying this new look a little more than I should, but it’s a very solid and robust theme, with a lot of love and work invested into, so check this out. 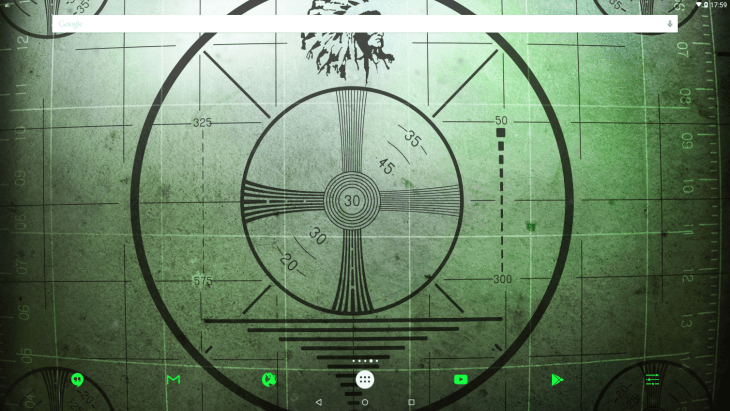 The theme needs a third-party launcher, and it supports a wide variety of them, so chances are if you are using any of the mainstream Android launchers you will have no issues. ADW, Apex, Action, Atom, Aviate, GO, Holo, Solo, Nova, Nine, Next, KK, Inspire, Unicon, Themer, TSF, Lucid and Smart launchers are supported, and applying the theme is a child’s play. Launch the app, tap “Apply Theme,” select your launcher from the list and voilà!

On the right, there is a menu button that opens the wallpapers, icons and a bunch of other less exciting menus, unless you are a designer yourself and wish to toy with the way you customize your new Pip-Boy theme. 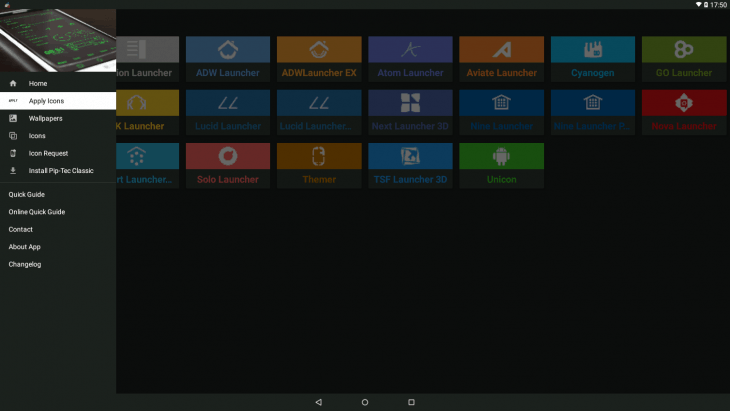 The looks are minimalist and crisp. There is a large variety of Fallout-themed wallpapers, including live wallpaper. The dark wallpaper looks best because the icons are of that neon green color that just does not look as sharp on the light background.

Immediately it becomes obvious the minimalist icons will make a lot of difference on smartphones, although a tablet’s screen looks impressive, too. I am just taking my time to get used to the new minimalist looks of my icons. You are supposed to be able to re-size the icons by zooming in on them, but I couldn’t figure out how to perform that action and make them a bit bigger for my tablet. 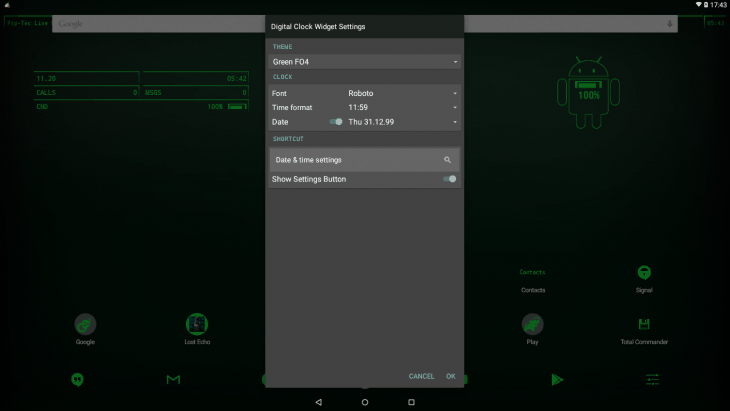 There are over 3000 hand-crafted icons for your settings, apps, games, system apps. The app offers two neon green colors to choose from, and you can also download a blue and amber themes, which are available as a standalone purchase. 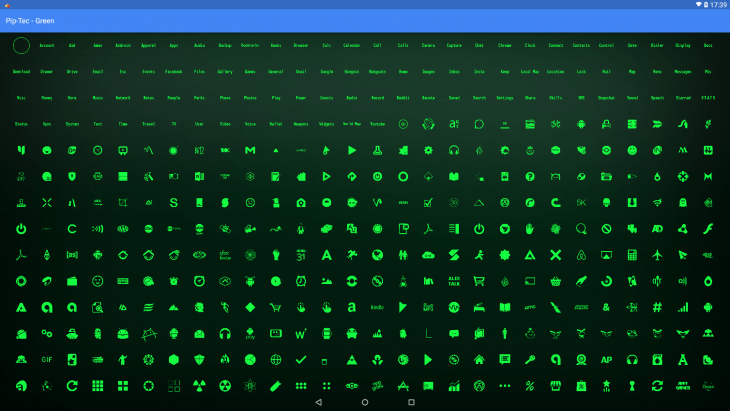 Widgets deserve a special say because they complete that Pip-Boy look and feel of your device. The Vault-boy inspired battery widget is especially hilarious because it starts weeping when your device is running out of juice. The weather widget is customizable and you can choose the location manually or let it find where you are automatically, switch from the imperial to metric and from the American to European time and date formats. A nice touch. It also displays the five day forecast. 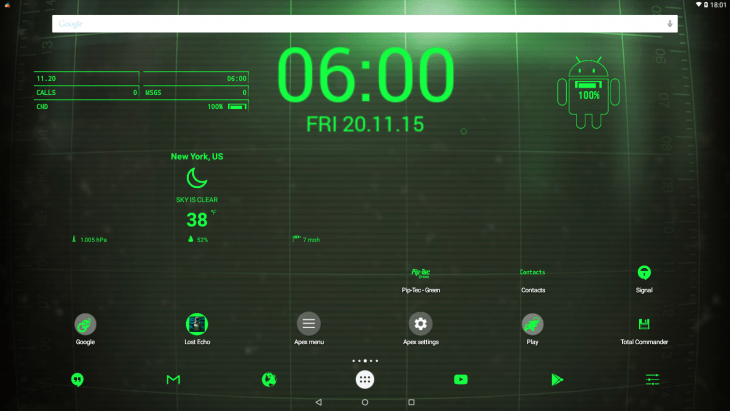 Another widget I love is the stats widget, which comes in two versions – boxed and list. It displays date and time, number of missed calls, unread messages and the battery status. It is fully customizable and you can add the third-party messaging and chat apps’ stats, like WhatsApp, Hangouts, Signal and Telegram. The user can choose which apps shortcuts and stats appear in the widget. Overall, the widgets look awesome on the dark background. Complete the looks with a digital clock, and you are ready. Oh, if you want a styled Google search bar, head over to Custom ICS Search. It will make the bar of that dark green color. The owners of the rooted devices and Xposed framework will be able to further customize the navigation and status bar icons.

The animated live wallpaper runs a scanline across your screen, and in my day with it, it did not seem power-draining. The active FO4 players will enjoy the FO4 stat widget.

Fallout fans will definitely love this awesome theme, with its flat, perfectly clean green icons and their variety, the wallpapers and oh those widgets. The app turns your device into a Pip-Boy 3000 in the best traditions of Fallout. The best part is it’s very easy to set up – no need to mingle with the tedious and complicated settings. It works with most Android custom launchers, lets you customize the widgets and shortcuts, and offers icons for the displays of all sizes, big and small. True connoisseurs of Fallout should definitely check this out to dive into the atmosphere of their favorite game, this time on their Android devices.