Drive into some trouble in Fast & Furious: Legacy? No need to worry, we’ve got you covered with a handful of useful tips and tricks that will hopefully be just what you need to cross the finish line before your opponent. If you haven’t, I recommend checking out our full review of the game as well, just in-case there’s some helpful information there as well.

When you’re ready to race, you’ve got the choice between three (or four if you’re in an active crew) different modes. Story mode will always have the best rewards, but can become extremely difficult if your car hasn’t received enough upgrades. You’ll still want to try and get through the Story as quickly as possible, which is why I recommend doing low level Ranked races and any Challenge race on each of your extra vehicles. Once you’ve done that, spend all of the points you receive on upgrades for your main vehicle, and start playing Story missions. 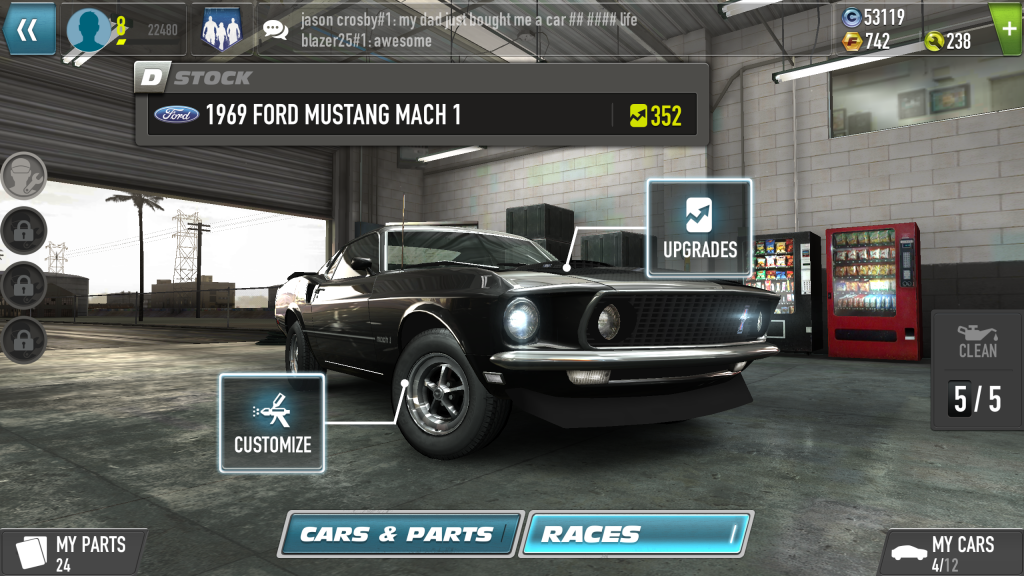 There will definitely be a point where all of your vehicles are waiting on an oil change, and your main car won’t be powerful enough to beat the current story mission. You’ll probably want to switch to Ranked or Challenge mode after you fail once on a Story mission, just so you don’t miss out on any potential rewards. The only time I’d recommend playing a story mission right after failure, is if you made some colossal mistakes. Drag races are especially difficult to win with pure skill, since there is so little you can do to make up for any missing performance — which is why I tend to get a couple of upgrades before I even try a drag race.

When it comes down to Challenge and Ranked, you can almost guarantee a win in Challenge mode with any vehicle, and they often yield oil change speed ups from the mystery rewards. Ranked will get you some gold for hitting milestones, but there’s a much higher chance you’ll lose at higher ranks while using less powerful vehicles. Although this rule of thumb may fluctuate as time goes on, my recommendation is to play up to Rank 11, and then switch to Challenge mode — unless you have a secondary vehicle with a few upgrades under the hood or you are using your main vehicle.

Street races involve a bit of skilled driving to pull off a perfect performance, but these are pretty easy to lock down after a while. The key is to get as much NOS replenishment as possible, which is done by drafting behind cars, close passes, and getting some air-time. When the race starts, get in the lane of the nearest pedestrian vehicle so you are in position to draft. Stay in the lane until the last possible second and then perform a quick lane change. Now, you should have already filled the bonus NOS gauge, and you should use your NOS boost. 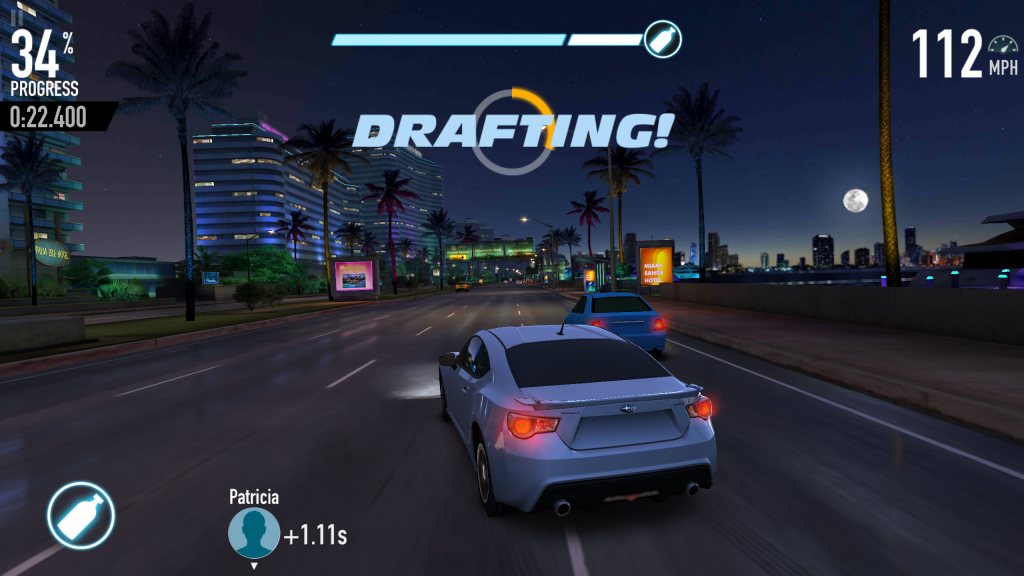 Continue to move behind upcoming vehicles and switching lanes at the last second, but try to prepare for even higher reflex tests as your speed increases and you have less time to make the perfect lane change. Every street race will have at least one ramp to jump, and the one I seem to end up playing the majority of the time has two of them close to the finish line. Try to make these jumps by any means necessary, and keep an eye out for cars that will sit in that lane until the last second, as you may need to swerve around them to make the jump. Once you start the jump, push the NOS button so you don’t lose any speed during the process.

The easiest type of race to master is Drag, since you’ll probably only tap the screen a few times throughout the entire race. Getting a perfect launch is really important in Drag, and after that, it’s all about getting perfectly timed shifts (which is really easy to do). Depending on the length of the race, you’ll want to use your NOS either right after shifting to fourth gear, or if possible, use it once you have already reached your top speed — just make sure the race won’t finish mid-boost.

Perhaps the most skill required type of race would be the Drift, which is much more difficult to achieve a perfect run on than either Street or Drag. The nice thing about Drift races, for whatever reason, is that they seem to be a lot easier to win than the other races. As for how you can win them, the key really is just practice and getting the right turn velocity down in your muscle memory. If you are still inexperienced, make sure that you use your NOS boost only on a straight path so it doesn’t throw off your drift. 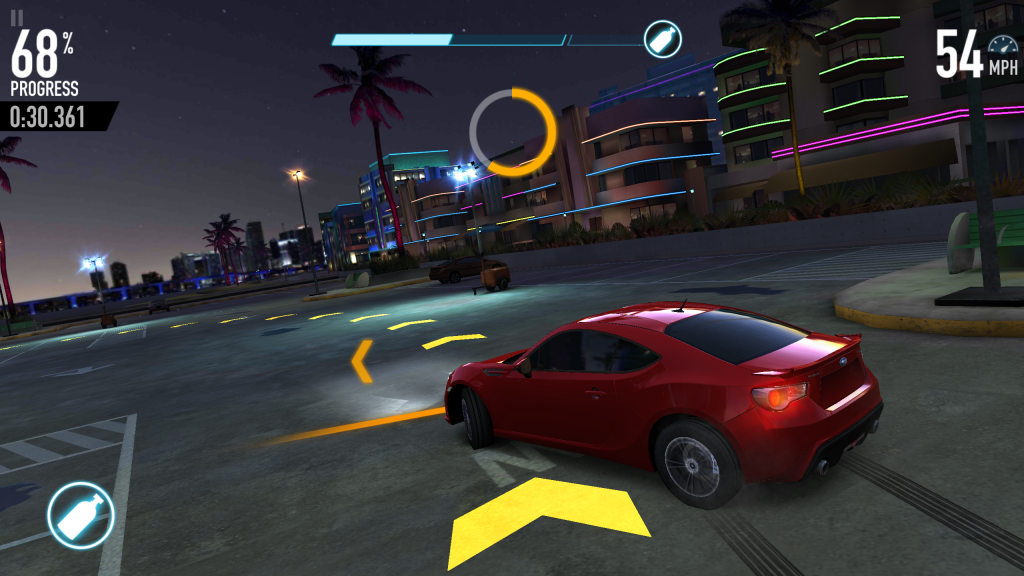 It may seem obvious, but you really need to keep an eye on the directional arrow and the color it is. If you are coming up to a left turn, drag your finger very slowly to the left, until the arrow turns yellow and you’re on the left side of it — then add some more velocity to your drift until you fall into the green, and hold your finger there until the turn comes to a close and slowly move it back. Same rules apply to a right turn, just the other way around.

For those who don’t like to spend real cash on freemium games, you may want to pay close attention to this section. There are no currencies in F&F Legacy that can only be obtained by cash, but there is gold, which is obtained by either cash or scarcely throughout the game. You’ll receive most of your gold through progressing in the story mode, but also through daily crates and ranked match milestones. I recommend never spending gold on car upgrades, since those can be purchased with other currency.

One thing to consider buying early on is a second mechanic, which is 595 gold — same price as an amateur car crate, which is what I’d recommend buying one of as soon as you can so you can get some decent wheels. After that, you should either spend it on cosmetic upgrades for your vehicle to get style points (which in turn will give you better rewards from races), or save for a pro crate. Unfortunately, you probably won’t get the pro crate until around level 10, but it will be well worth it when you do. After that, work on decking out that nice new ride with some style points.