Here is a hypothetical example of how surveillance agencies create a free data mining tool, then throw the bone to the mainstream media to create a lot of hype and buzz about it, and gather the data from the users who bought the hype.

Last two weeks, Internet is buzzing with news from Hong Kong and how FireChat is helping the students who fight for democratic elections in Hong Kong overcome the draconian censorship of the Communist Chinese government.

We see news of FireChat on TV, in major online tech magazines and Twitter timelines – everywhere. Naturally, users start feeling curious and download the app only to send their emails to the company’s servers. Via Internet, by the way, despite the app’s promise to provide you a way to chat ‘off-the-grid.’

But let’s see if unhappy user reviews mean a really poor execution of a great idea, or the majority of users simply got the whole idea wrong, and that’s why they post the mean reviews.

FireChat lets users create peer-to-peer public chat rooms, where each device connects to the other via Wi-Fi Direct or Bluetooth. The end result should be a public chat room, which means that any FireChat-enabled device can read and contribute to the chat room.

As you install the app, it asks you to let FireChat use your device’s Bluetooth at all times to let others tap into it and expand the mesh network reach. Note that the app wants to run in the background at all times, even when you are logged out. You may disallow, but that does not change the outcome.

It does require you sign up and provide your email address during the procedure. It does have a bug in the sign up process, which does not let you create a password for your account, so when you log out, you can’t sign back in, and have to go through the password reset procedure. Mind you that you submit your email to the company’s servers for storage.

The next frequently reported bug is the app keeps running in the background even when you’re logged out, and it keeps sending you notifications about new chat messages. Pair that with the app’s heavy reliance on GPS, yes it tracks your location for a good reason – to find the FireChat users in your immediate vicinity and connect you to the mesh network. But when the app keeps running in the background with the GPS on, it kills the battery in no time.

There is more. Users report the app kept sending them chat notifications even when the GPS was off, and data connection was on, which means it simply uses Internet to keep you in the system at all times. 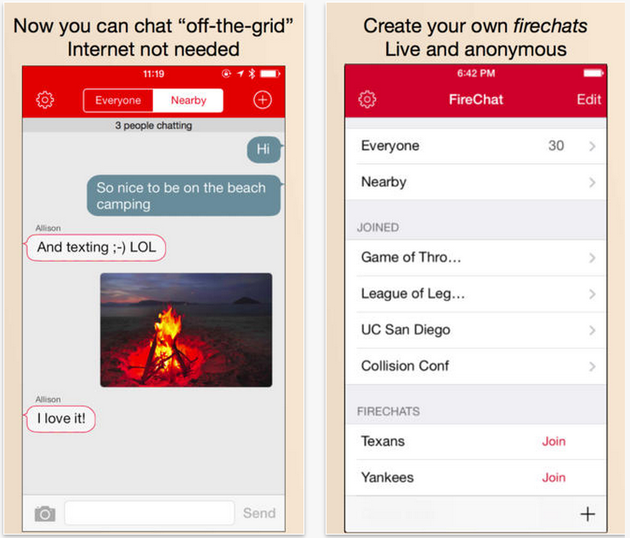 The next issue I see is the audience. Let us assume you are not in Hong Kong protesting (non-/)existing oppression (these students spent too little time living under the British rule), so why would you be interested in a public chat, where anyone can join in a conversation? You can’t use it for private conversations; you can’t lock your chat rooms with passwords. Your newly created chat room is visible for anyone to join. It does not take a scientist to figure out there is a lot of swearing, dumb attempts at hook-ups and teenage, or grown-up, bullies because this is what happens in non-moderated public forums.

Let us suppose you might be using it with your friends to exchange private messages without paying for your Internet connection or wireless carrier SMS fees. You have to be in the approximate vicinity (up to 200 feet) for your devices to create the peer-to-peer connections, and unless it’s the saddest story of Romeo and Juliet, when Romeo is hiding underneath her balcony to text her serenades so that their parents don’t see the kids’ texting bills, I don’t see how this can be much fun. Besides, finding the right chat room is a challenge since there is no search option, and the list of existing rooms is constantly changing.

Obviously, mass events like the one in Hong Kong or Ferguson can and will benefit from the apps like these because it’s nothing a wireless carrier or Internet provider can put a lid on – it’s peer-to-peer. 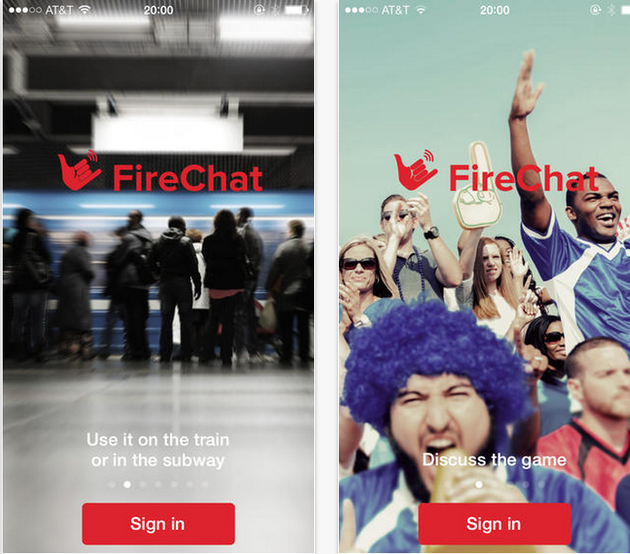 FireChat is one of the many apps in the market that wants to bring people closer, and its excellent idea is currently plagued by poor execution. I don’t suppose Open Garden get worried too much about teen bullying in non-moderated public chat rooms, but the creators of the Secret app weren’t either, until the recent scandal undermined the entire startup’s reputation.

The pros and cons of FireChat are pretty obvious, and leaving out the media buzz aside, see it for yourself if your buddies can make good use of an app like FireChat.

P.S. If I were a surveillance agency, I would have created an app like that.