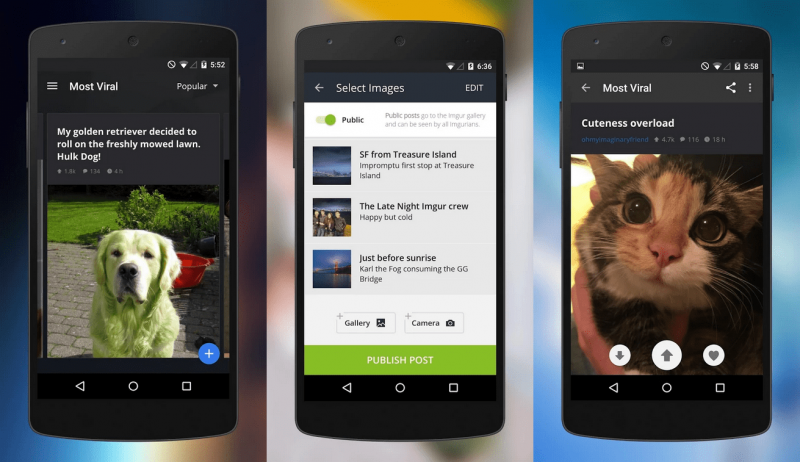 Today, the folks at Imgur had a busy day – firstly, the iOS app was updated with the option to upload new images directly from the app. Users can upload photos from the camera roll or quickly snap a new one right from the Imgur app and then share it.

Secondly, the company has just released a new Android app, and no it’s not an upgrade. Imgur says this is their first native app for Android and was built from the ground up. The app has a neat, modern UI with intuitive options and simple navigation controls.

Users can access card-based galleries which organized the site’s huge image collection into relevant categories such as Funny, Most Viral, Random, Awesome and so on. Once you’ve selected a topic, the app gives you a seemingly endless stream of related photos. For each image you can comment, mark it as a favorite, vote it up or down as well as share it in other apps and services.

Just like Imgur for iOS, its Android counterpart lets users upload their own images from the camera roll or use photos taken directly from the app using their device’s camera. Andrew SHu, Imgur’s lead mobile developer said their mobile apps focus on simplicity and ease of navigation so users can quickly connect to Imgur, in practically any situation.

Some consider Imgur is rather similar to Instagram, but this service is mostly focused on funny images like memes and GIFs as well as motivational posts and tutorials. All in all, if you often have some spare time to kill and enjoy browsing through an incredibly large collection of pics to entertain yourself, you should definitely try Imgur (if you haven’t done so already).

Follow us on Pinterest, Google+, Facebook and Twitter to receive our latest apps & game reviews, news, tips and how tos for Android, iOS and Windows Phone. You’re also welcome to join the Pocketmeta forums for some more mobile related talk!