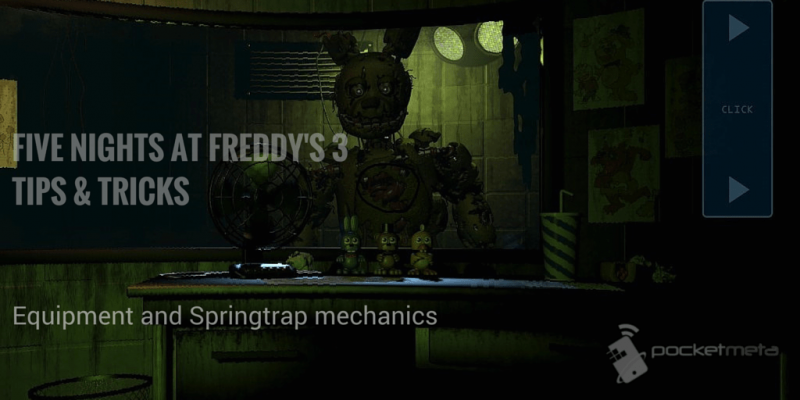 Five Nights at Freddy’s 3 is the third installment of the game series developed by Scott Cawthon. His latest survival game retains the same horror theme he’s gotten us used with but this time, the mechanics can make it quite difficult to keep both your life and sanity.

30 years after Five Nights at Freddy’s 1, almost no one remembers Freddy Fazbear’s Pizza, but some people came up with the idea to profit from its urban legend and turn it into a horror attraction. The spook factor has to be credible to get the patrons on board and a security guard (the player) could help improve the scenery besides actually guarding the props.

Apparently, your employers still have a few items they need to bring in, and until then, you’ll have to spend one night in the building. The one night inexplicably turns into 5 and while the premise feels a bit strained, you still need to survive for the whole period, locked inside the facilities.

FNaF3 features Springtrap, the most complex animatronic in the game, although compared to the previous titles in the series, this one is smarter, moves faster and often shows unpredictable behavior. He’s the only one that can actually kill you, the rest of the animatronics will only be able to make you hallucinate. There are other factors that make dealing with Springtrap a challenging task. You can only lure him using audio, he’s very hard to spot as his colors are similar to the backgrounds and you constantly have to deal with camera, audio and ventilation errors.

In Five Nights at Freddy’s 3, the equipment you get to use is as scarce as it’s old. There’s a camera system, audio devices and the ventilation that are going to fail very often. All of them can be controlled from the Maintenance Panel. 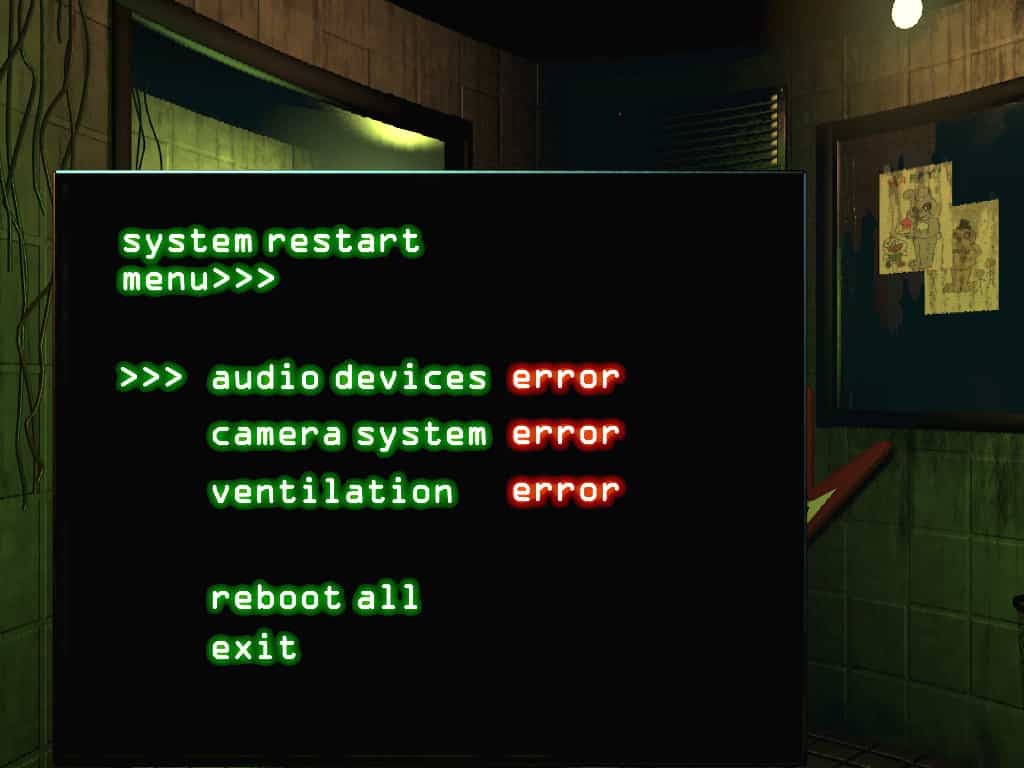 The Audio Devices let you play a sound (a sequence of Ballon Boy’s laugh) that can be used to manipulate Springtrap’s movement because he is attracted by noise. You won’t be able to use the ‘play audio’ option while the Audio Devices are turned off. Because the equipment is outdated, the Audio Devices will get errors after several uses.

The number of uses before an error occurs decreases as you progress to later nights (only two times on nights 5 and 6). You’ll have to reboot the audio system from the Maintenance Panel so it can go back online.

The Camera System is also going to need a reboot every now and then. You can easily see it needs to be done, as the monitor will turn black, showing a ‘Video error’ message.

If two or more systems turn off, use the ‘reboot all’ option. It takes approximately 5 seconds for a single system to reboot and 8 seconds for all three by using ‘reboot all’. You can save a lot of time with this option. On later nights, this strategy may not be the best. Springtrap can have enough time to get to The Office, even if he’s on the far end of the facility. Alternatively you can reboot each system individually, and use the audio to lure him in between.

Quickly reboot the Ventilation after a jumpscare. You can do that before you black out if you hurry.

Never delay rebooting the Ventilation System once it’s down. The loud alarm playing will make Springtrap head directly toward you.

You can seal any vent by double clicking on the related vent camera button. It will remain sealed until you select another vent.

Springtrap is the only character in FNaF3 that can actually kill you. If he actually gets to look into the office and you stare at him for more than 10 seconds you’re probably going to get jumpscared by phantom Freddy, then by Springtrap and die. 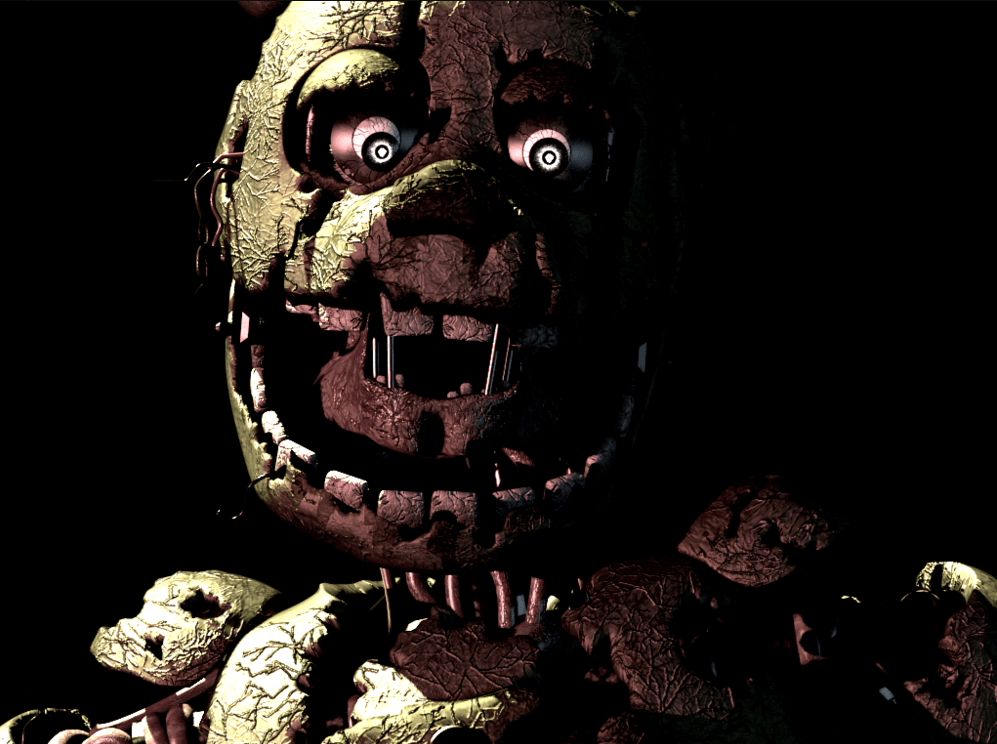 From what I’ve experienced (as well as others), sometimes (especially in the later stages of the game) you can survive by simply doing nothing if you are close to 6 a.m. If the clock hits 6 a.m. before a ventilation error occurs you might just stay alive. Raising the monitor or turning away from Springtrap unmistakably results in death.

That’s what happens if Springtrap reaches the office and gets the chance to look you in the eyes. Nevertheless, there are ways to prevent this.

Springtrap is attracted to sounds. If you spot him on a camera, switch to an adjacent room (he can only hear sounds played from rooms next to the one he’s in) and play the audio.

Use the vents. Always keep in mind Springtrap can travel through the vent network, but you can seal vents to alter his path, besides using the ‘Play Audio’ option. When Springtrap is in a room that’s connected to one or more vents, seal the vent that would otherwise let him get to you faster. Be aware there’s a small delay between clicking on the camera to actually sealing the vent, time during which Springtrap can still move through it.

There are various strategies used to contain Springtrap. My favorite one involves using CAM 9 and CAM 10 because these are in the room that’s furthest from The Office. He won’t stay there all the time, but at least he won’t be able to reach you too fast , which will give you more time to lure him back when it happens.

Another method is to use CAM 5. When he leaves the room, use the audio to call him back right away. This usually works, but CAM 5 is closer to The Office, thus its riskier to use this one since he can get to you faster.

I’ve seen other ways to control the animatronic’s movement, like the one in which you draw him to CAM 4 and sealing the nearest vent (the one at CAM 15) so he’ll either linger around for a while or try to move to CAM 5. In that case you can just play the audio to lure him back. I still prefer the CAM 9/CAM 10 strategy since it takes Springtrap as far as possible from The Office, but this works for situational use too.

If Springtrap is right outside The Office all you can do is play a sound on CAM 1 to draw him away in the hallway.

Playing audio won’t lure Springtrap while he’s in the vents. It only works if he’s in a room.

When Springtrap shows up in front of your office’s window, you can pull him back if you switch to CAM 2 and play the sound quickly.

There’s a special sound (quite descriptive too) Springtrap makes when he moves through vents. This can help you locate him faster.

I’m acutely aware the Springtrap mechanics are intricate, to say the least. These are just a few tips and strategies that can be used to handle the murderous animatronic and you’ll probably find more during your play time. I’d love to hear what other solutions you’ve found to control Springtrap and update this post so everyone can see and try them.

If you enjoyed this post, check out our follow up article, for tips and tricks related to the phantom animatronics and minigames found in FNaF 3!