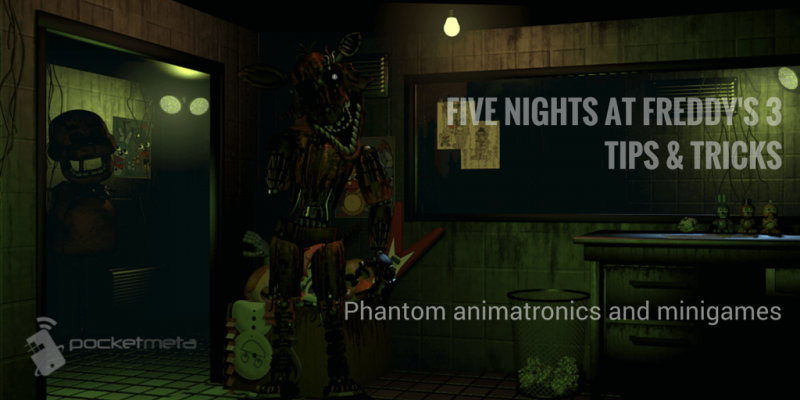 The security guard you’re playing in Five Nights at Freddy’s 3 has to survive through 6 terrible nights in the horror attraction facility that was known as Freddy Fazbear’s Pizza 30 years back. The basic controls in the game are simple, but using them properly is definitely not intuitive.

For the most part, you’ll have to go through a rather lengthy process of trial & error, to figure out how Springtrap can be controlled as well as the phantom animatronics. Furthermore, FNaF 3 includes several minigames that can be completed in multiple ways, influencing the game’s ending story.

I already detailed some useful tips and tricks for using the in-game equipment and controlling Springtrap’s movement in a previous article. Now I’ll go over the phantom animatronics featured in FNaF 3 and the minigames completion path that ensures you reach the ‘good ending’.

FNaF 3 contains 6 phantom animations – none of them will kill you, but they can jumpscare you and leave you vulnerable to being attacked (and killed) by Springtrap. Each has its own ‘specialty’ and they can cause real trouble, leading to ventilation errors, starting the alarm, shutting down the audio or prevent you from using anything and blocking the view. Furthermore, you can get jumpscared by two phantoms one after another so don’t count on any kind of temporary immunity after a jumpscare.

They can be avoided though, by using a few simple tactics (which suddenly become more complicated while you’re multitasking in-game). 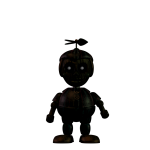 Balloon boy – BB will randomly show up on the security cams, blocking the view completely. DON’T STARE AT HIM (for too long) or he’ll jumpscare you and disable the ventilation system. What you must do, is switch to another camera feed as fast as possible.

Chica – The eyeless spook appears at random on CAM 07 (more frequently as you advance to later nights). Just like for BB you have to change camera views very quickly after you spot her. Otherwise she will re-appear at the left side of The Office, jumpscare you and cause a ventilation error. 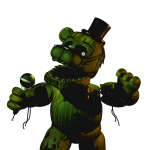 Freddy – Sometimes you’ll see Freddy walking across the office window. To avoid him you have to pull up the Monitor or the Maintenance Panel (or keep them like that if you were already using either) and wait until he disappears from your view. If you make the mistake of looking at him through the window he will briefly go away and jumpscare you a few seconds later.

An unfortunate combination is when you’re already staring at Springtrap and Freddy pops up at your window. As long as you don’t have the Monitor or Maintenance Panel up, Freddy can (and will) jumpscare you, it doesn’t matter if you’re not looking at him directly.

Foxy – This animatronic tends to appear whenever you look at the camera feed for too long (so don’t!), but it can also show up randomly. When it shows, it will be in the Office near the box of parts. Foxy idoesn’t show up on camera feeds.

When Foxy appears and your Monitor is up, keep it that way and you’ll avoid the jumpscare. Otherwise, pull it up before Foxy gets the chance to look at you directly.  If you make eye contact with this phantom he will lunge at you, trigger the jumpscare and cause a ventilation error.

Puppet – The white-eyed ghost will randomly show up on camera feeds. When this happens you need to switch camera views quickly or the Puppet will pull down the monitor and persistently stare at you, making you blink more often and become unable to use your monitors or the terminal.

Obviously you’ll be defenseless against Springtrap, but also vulnerable to the attacks from the other phantoms.

Mangle – The mangled appearance can be randomly seen on the floor in the CAM 04 feed. Like for other phantoms you have to shift to a different view as fast as possible. If you don’t do it in time, Mangle will stare at you from the other side of your office’s main window, making a horrible noise and causing an audio system error. The noise can potentially draw ‘you know who’ way too fast.

While Mangle is still screeching, you can raise the Terminal so once the audio system shuts down you can reboot it immediately.

FNaF3 can end in three different ways. There’s a good ending in which you stop the suffering of the tortured souls and give peace to the spirits of the dead children. Then, there’s the bad ending in which you do finish the game but the animatronics’ spirits remain tormented for all eternity.

There’s also the neutral ending that you unlock if you complete the game in ‘Nightmare’ mode. In this scenario bad wiring is to blame for a fire that burns Fazbear’s Fright to the ground, all of which you’ll see in a newspaper article.

The game includes arcade-style minigames – some can be triggered manually at any time, while the rest are night-specific games. At the end of each night, you’ll be guided to play a minigame and your progress in it will have a direct influence on FNaF3’s ending. 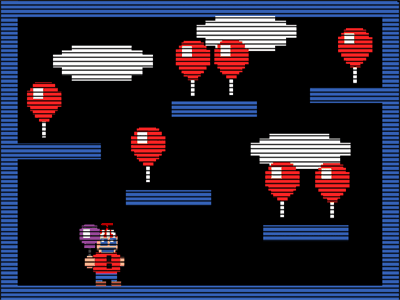 This minigame can be played on any night and you can access it by switching to CAM 8 and double click on the Baloon Boy poster found on the left wall.

Collect the 7 balloons but don’t go through the exit door that will show up (this ends the game immediately). Go to the top left corner and jump through it.

Once you fall down to the bottom of the new area go through the right wall to reach the last room. You’ll see a balloon that changes its color, which you must collect. This game can be accessed on Night 2. In CAM 7’s feed you’ll see an arcade cabinet with some buttons on it. You’ll need to press them in exactly the following order: top left, bottom left, top right, bottom right.

Use WASD to control Mangle as you collect his parts (4 in total) while avoiding the big kid running around at the bottom of the screen. Avoid touching the kid, as this kills Mangle and ends the minigame.

An exit will appear after you collect the 4 parts. Don’t use it. Jump on the platform above the door and then through the top left corner. Once you reach the bottom of the new area go left and jump on the balloon platforms towards the top of the screen. Collect the cake.

Return’s to BB’s Air Adventure, collect the balloons and go to the last room once more. This time, there’s going to be a balloon platform. Jump from one balloon to another until you get to the crying kid and give him the cake. 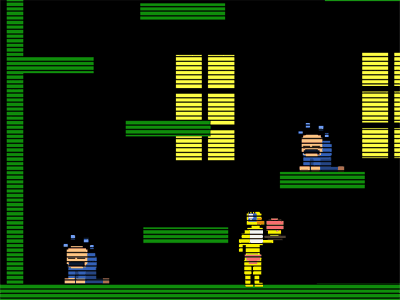 You can access this game on Night 3 by spotting the white-eyed cupcakes using the camera feeds. They always show up on CAM 2, 3, 4 and 6. After you collect the 4 cupcakes you will enter Chica’s Party minigame.

An optional step is collecting the cupcakes and giving them to the kids (don’t use the exit doors).

However, you can jump directly through the hole at the bottom of the screen. In the next area jump over the obstacle found at the top left side of the screen and fall down to the next level. 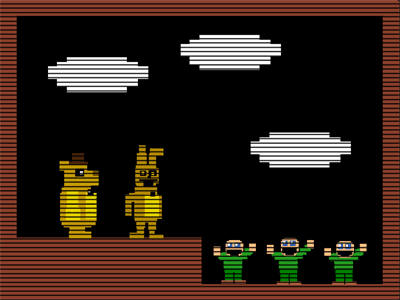 There’s a nine-by-nine grid of tiles in the office, beside the cardboard box, under the window. Use it as a dialpad and enter the following code: “395248” to access Stage 01.

Similar to the group of tiles, the game contains 9 rooms organized as a nine-by-nine grid. Jump on the kids and you’ll be able to move through the ground and fall to the bottom of the game. Once you get there, go right to the second room. Don’t use the exit door or the game will instantly end.

Jump against the left border of the room and you’ll be able to move up to the top. Now jump to the right, go to the top once more and then left until you get to the middle of the screen border. Jump up to get to the room above.

You’ll enter a room with a crying child. Give him the cake (finally)! 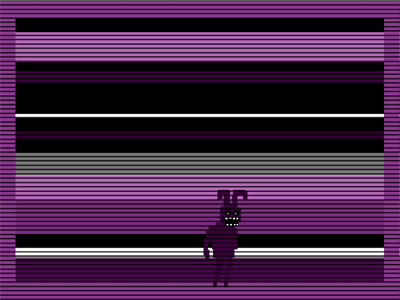 You can launch this minigame on Night 5. On the right of the desk in your office you can see a figurine of Shadow Bonnie that’s barely visible. Click on it to trigger Glitch.

Go to the BB’s Air Adventure section of the Glitch game. Jump through the false wall located at the top left corner of the current screen.

Phase over to the purple room with the crying child by shifting the game screens. Give him the cake. That’s it! 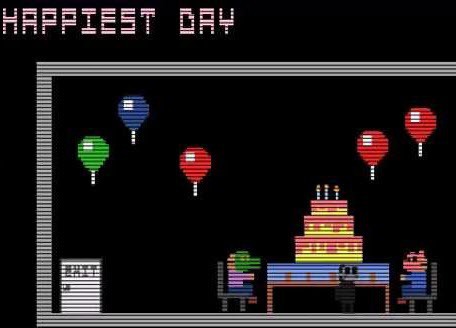 Like BB’s Air Adventure, this is not a night specific minigame. You’ll need to complete the cake endings (yeah, the part in which you give the cake to the crying kid), for the previous 5 minigames, to reach  this one’s.

You’ll play as the Puppet and you can move him only to the left and right. Go to the right and you’ll see four kids wearing masks of Chica, Bonnie, Freddy and Foxy and a crying kid to the left of the table. If you run into the table a cake will appear on it. Both you and the children will disappear, and their masks will drop on the ground.

If you reach this ending you’ll see a star on the main menu, meaning you’ve accomplished the good ending. It was a piece of cake right?

Don’t forget to check part 1 of our guide for using the equipment and handling Springtrap if you haven’t already. Have you found other useful strategies to avoid getting jumpscared by the phantom animatronics ? Share them with us in the comments section!

Follow us on Pinterest, Google+, Facebook and Twitter to receive our latest apps & game reviews, news, tips and how tos for Android, iOS and Windows Phone. You’re also welcome to join the Pocketmeta forums for some more mobile games discussion!