The official Facebook app is frequently being updated with new features, but what seems to diligently survive from one version to the next is its never-ending thirst for battery and data. As a solution primarily for users from developing countries who are still stuck on connections with limited bandwidth, Facebook released its Lite app in June 2015.

Even if all you care is conserving your data plan, Facebook Lite might be, shall we say a bit too 1999-ish for many users in which case all that’s left is to go back to the original app or simply visit The Facebook website every now and then which is definitely the battery friendly alternative.

There are a few third-party apps for Facebook, that are trying to fix some of the original’s problems and Folio for Facebook is one of the most recent. This new app has no affiliation with Facebook, but it does manage to keep you connected to your Facebook friends, with minimal battery drain. 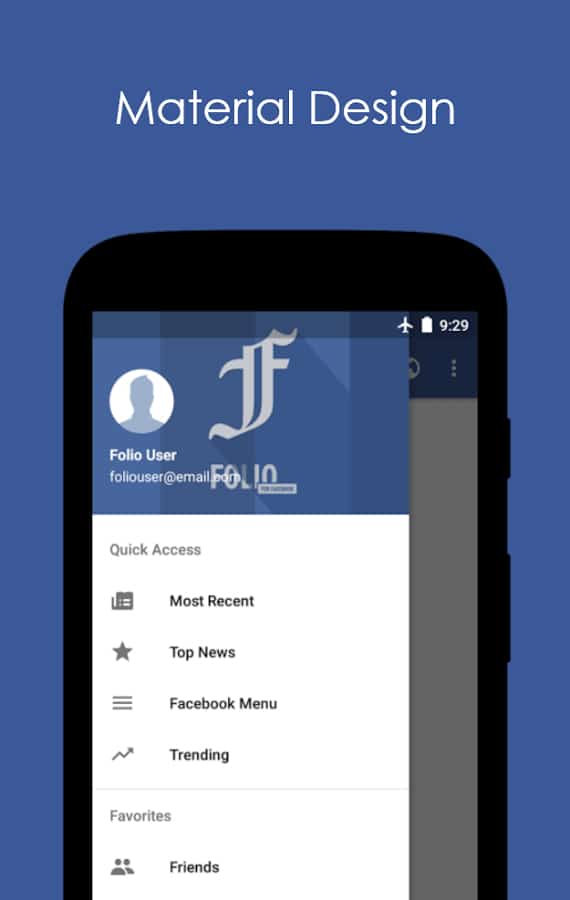 The app is practically a wrapper for the mobile version of the Facebook website, but it does offer a superior experience compared to using Facebook on the web. Firstly, it has a beautiful Material Design UI with plenty of themes to choose from which is practically the only paid feature (it can be unlocked via an in-app donation/purchase).

It also keeps you up to date with general and message notifications for which you can customize various aspects, including their frequency. In the app’s left-hand panel, you can find shortcuts to Most Recent, Top News and Trending feeds which are placed at the top of the menu.

Folio offers a QuickBar with the basic Facebook shortcuts for faster access and the best part is the way it works in the background. The app only wakes up to check if you have new notifications according to the frequency set by you a. So you can expect to save a significant amount of battery, even if you customize the notification check intervals to be just a few minutes apart.

Folio is a new app so you might experience some bugs or problems after updates, the developer seems very communicative and eager to fix issues quickly. Even if it’s still at its beginnings, Folio offers a superior experience to using the Facebook web version (or the bloated, resource-hungry original app for that matter) and it’s definitely worth a try.

If you decide to test Folio for Facebook, come back to let us know how you like it, if you find it better than the original and what features you’d want to see added in future updates. And don’t forget to follow us on Google+, Facebook and Twitter to receive our latest apps & game reviews, tips and guides for Android, iOS and Windows Phone.