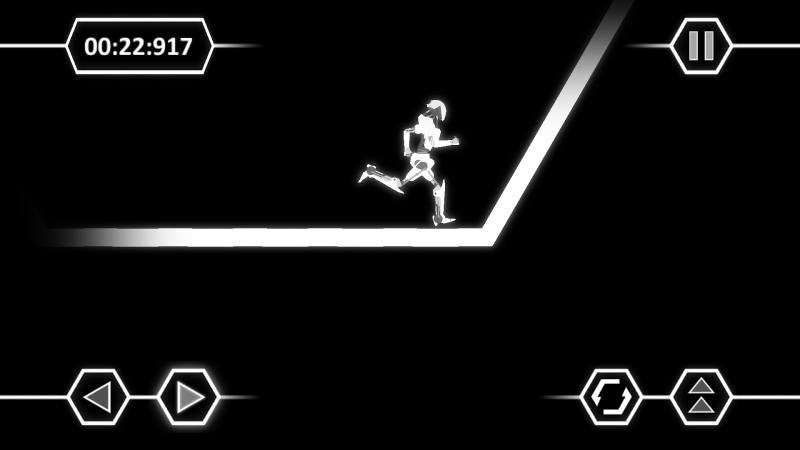 Every once in a while a new game pops up that is just impossible to pass by, and this is the case with Out of The Void. Don’t ask me how I even found it – must have been aimlessly browsing the depths of Google Play, and the game’s icon got my attention. Here is one for the catchy icons, devs! 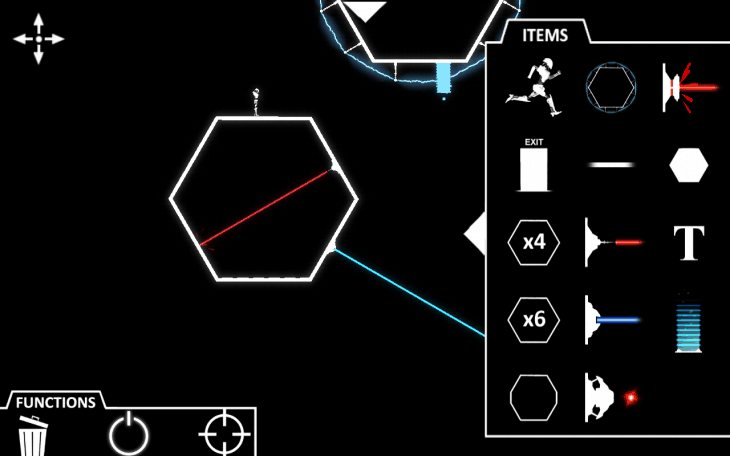 Out of The Void is a ruthless, painful, difficult puzzler with crisp, minimalist design, awesome sound effects and a twisted brain. Literally.

You control a human-like robot trapped in a digital maze from the likes of a void Tron-like arena. Black void all around, shimmering lights of something that looks like rain, or thunder, depending on where you are in the game, surround the protagonist. Despite being a robot, it’s quite mortal. And very lonely.

The robot is trapped in a hexagonal room. The gist of the game is to get the robot from where it stands to the exit, which is a white shimmering door, located in a distant contraption. 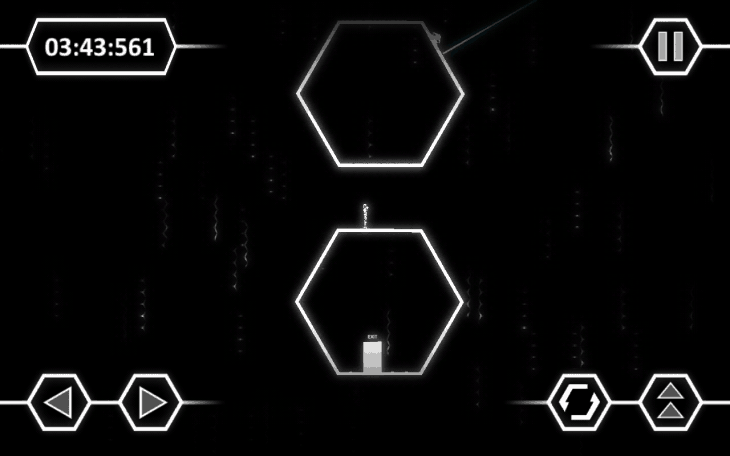 The game explains itself very well. You control the robot with the help of four on screen buttons – run left and right buttons are located to the left, and to there right there are two more buttons with special abilities. One is to jump, another is to turn inside out and the other way around the panel you are currently standing.

The point is whenever you, that is the robot, are inside or outside a hexagonal room, you can activate its panels to move inside out and vice versa, so if you are inside, and need to get out, tap that rotate button and the panels will invert, leaving you standing outside.

The jump button lets you jump from panel to panel when you are inside a room, or jump from one hexagonal room to another, provided they’re close enough. 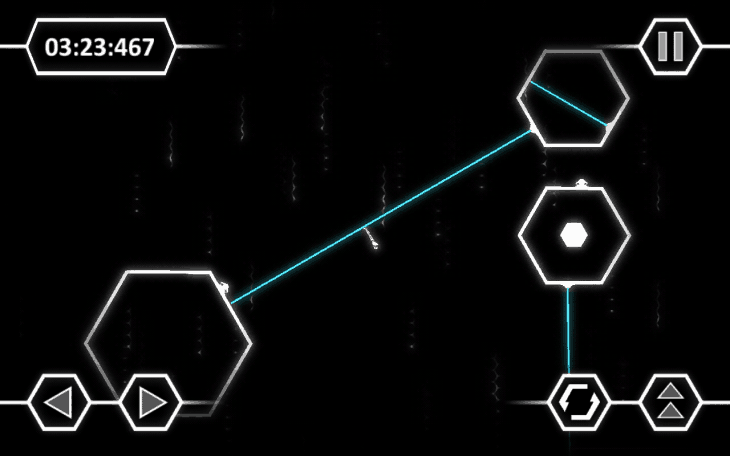 Now, it would not be that much fun if there weren’t plenty of deadly contraptions, lasers, shooting mechanisms and other twisted gizmo. The end result is pretty impressive – each level is a beautiful maze of lasers, hexagons, blue and red lines, traps and unexpected outcomes. In order to get to the exit you need to guide the robot to activate or deactivate the lasers, mechanisms and sometimes make quick decisions when a situation arises. 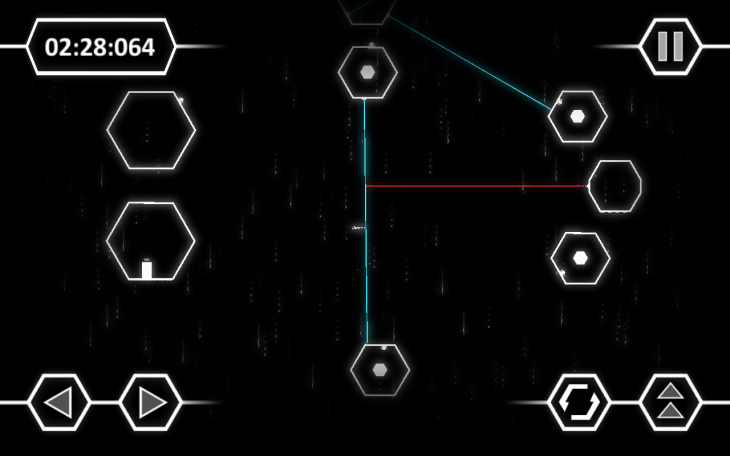 The difficulty ascends quite moderately, but the overall impression is it appeals to the hardcore fans of the puzzle genre. If you wonder what the similar games would be, think Dark Echo, the Sequence and all installments of Laserbreak by errorsevendev. 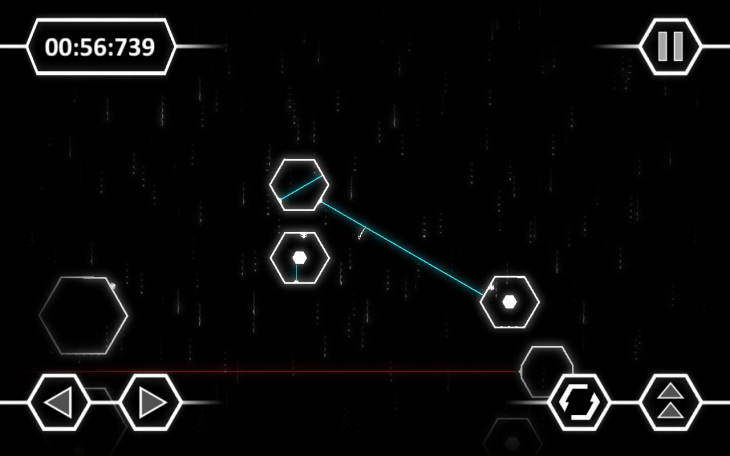 The replay value is excellent, and each new chapter offers a new twist on puzzles and novel contraptions. I am loving the aesthetics of the game – the crisp neon glowing rooms and lasers look smart against the pitch black void, sometimes filled with rain or other creepy substance. The robot itself looks surprisingly detailed, especially considering you can zoom in and out on the area and the robot. The experience would not have been so complete if it weren’t for the realistic and neat sound effects – the sounds of the foot steps, walking or running, jumping, switching of the panels, activation of the mechanisms – obviously, a lot of thought went into crafting it. Out of The void is an excellent example of a minimalist game done right so that it does not even look minimalist, but polished, as if it could not look any better. 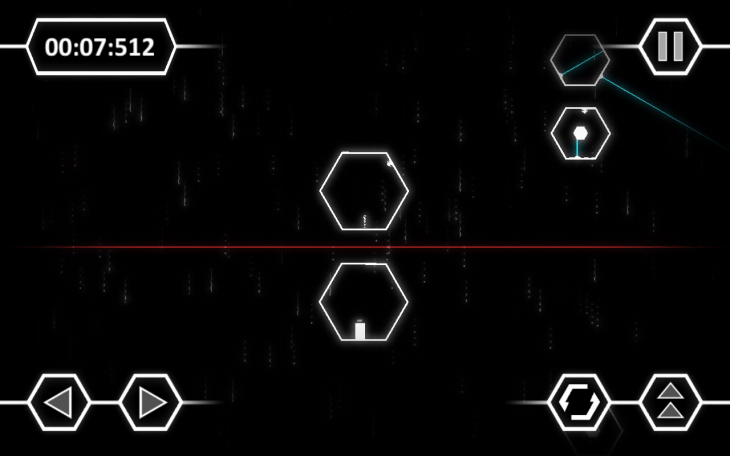 That’s not all. There is a level editor, so you can create and share your own levels, and managing the items and testing the traps is quite easy. There are two white triangles at the top and to the right – don’t drag them, just tap them to see the menus. Each item you place on the grid can be moved about, activated to see what it does, and removed. There is also a button to switch from the camera to moving objects mode, several buttons to load a project, save the current project and share. 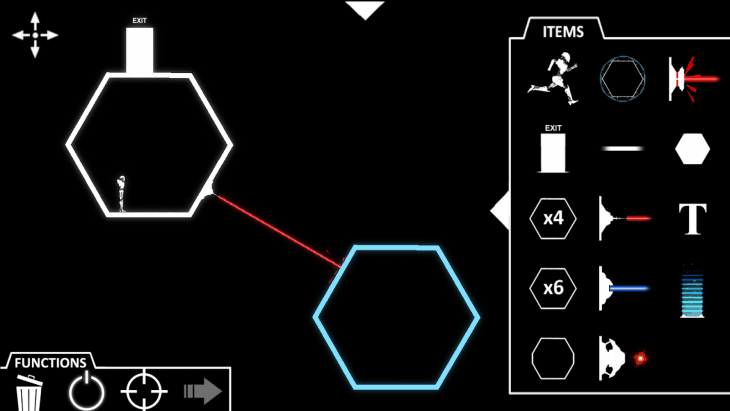 Even though the controls are simple, responsive and straightforward, sometimes it gets difficult to navigate – not through the controls’ fault, but because the game is a nightmare for spatially challenged. The reverting panels of the rooms make a mess of what’s left and what’s right, and when you end up close to the red laser line, it’s no time time to guess which button to press to run.

The game is free to play, ad-supported, and you can remove the ads for $0.99. Moreover, it is playable offline, so you can play it on the go, in short snackable bursts or in long sessions, as long as your brain does not boil. 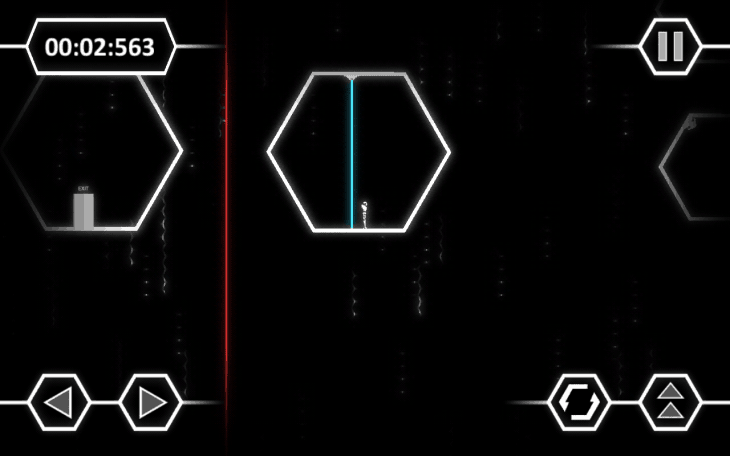 It did crash a few times, and I am finding it difficult to tell why. On the first day it ran flawlessly, and on the second it suddenly got to crashing. Force-stopping the app through Samsung’s running apps would make it work again. Perhaps the bug is hiding in the globe icon, which opens the editor and sharing options. 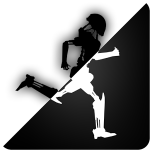 Out of the Void

Out of the Void is a brilliant mind-bending puzzle with a crisp, minimalist design, unique atmosphere, great sound effects, and noteworthy take on spatial puzzles. If sci-fi is your style, and you like novel ideas in puzzles, check it out. As robotic as the protagonist is, the atmosphere of the void makes you want to solve those traps as fast as possible because it feels suffocating at times. Considering its 35 levels are free, playable offline and topped with a level editor, which lets you make your own stages, share them with your friends and challenge them who beats the fastest time in a specific level – the game is a must-have this month.