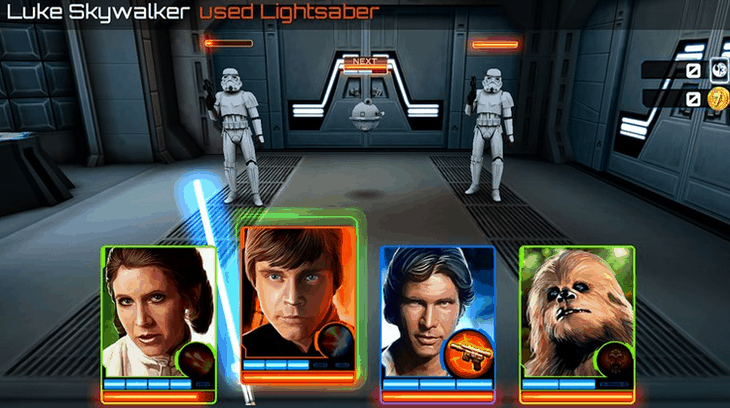 We just reviewed Star Wars: Assault Team by LucasArts, and if you feel like trying your luck and wits with one of the best Star Wars renditions for mobile, here are a few tips that may get you through the pitfalls of wasting all your currency on stupid purchases to only face battling on the boring Arena to earn cash, or paying real money to level up your team.

Here, we shall give you an idea about how to treat your team wisely, keep your energy and money, battle and level up, as well as survive Arena and take advantage of it.

You will start with one character, most likely Han Solo. As soon as you unlock a new character, add it to your team, even though it might not be the coolest creature in the Star Wars gallery of heroes. The more character slots you fill, the better are the chances of victory, even though the initial levels are quite easy.

You only have 5 character slots, so fill them up quickly. As you unlock new cards, consider regrouping your team, and most importantly training and leveling up. There is no need to buy Tier 4 and 5 cards because you will unlock them later in the game or via Hero Crates.

As you train your heroes, at some point you will notice a pop-up offer to promote him. Promoting your heroes will let you choose promotion items or other characters, for example lower Tier cards, as payment to promote your character to higher tier.

Also, it’s better to train in bulk, so whenever you have a chance to train your hero with as many training packs as possible, up to five, do it while you can, because the next time you get to training it will be more expensive. 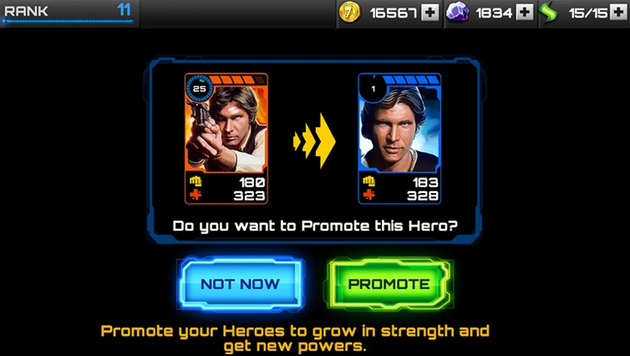 Balance Skills of Your Team

As you might have noticed by now, each character has unique abilities, so measure those before endeavoring on your next mission because often a good combination of team members’ skills is the key to victory. Also, you need to pay close attention at each card’s personal mission – some are powerful fighters, while others are healers, or digital hackers. Sort out each card’s purpose and use it to your advantage, but don’t wait for the second shot!

The most powerful characters in Star Wars: Assault Team

It makes perfect sense that most powerful combat cards are those of Luke Skywalker and Pouncing Katarn, while fine complementary members are Han Solo, Chewbacca and Princess Leia. C-3PO has a remarkable electric shocker, while R2D2 is a must-have for some particularly techie missions. Also, if you have a healer, keep him in your team for emergency purposes.

You can view information about your enemy while long-tapping on it, so you can identify the most dangerous one. Taking out the most powerful enemy makes perfect sense, and never wait too long to use that Lucky Shot because you may never get a chance for a second shot.

Sometimes, the character who attacks the last is the one with the most damage potential, so must be the first to be knocked off.

Naturally, heroic and epic modes are more challenging, but are locked until you complete the normal mode. However, it is worth going through to unlock the next two difficulty levels because these get you more rewards and progress, and rewards available in the most difficult modes are unique.

Now, Arena offers a way to earn cash and rewards through winning, which isn’t always an option. However, when you win, it is always better to grab your rewards and exit arena, then entering for fight again. Otherwise, if you stay and choose to battle someone else and lose, you will also lose all the rewards from your previous battle.

You gain experience points by completing missions in heroic and epic difficulty levels, and in single player mode, not in Arena. Alternatively, XP points are available when you unlock a chest at the end of every stage.

Rewards and bounties, on the other hand, can be won on the Arena, as much as Arena experience. Energy, on the other hand, is a pain to replenish, especially for hardcore gamers with plenty of free time on their hands. You can either wait for the automatic energy refill that takes place approximately at rate of 1 point per 8 minutes, or buy it for gems. Alternatively, you get energy each time you rank up.

Hope this helps, introductory as it is.