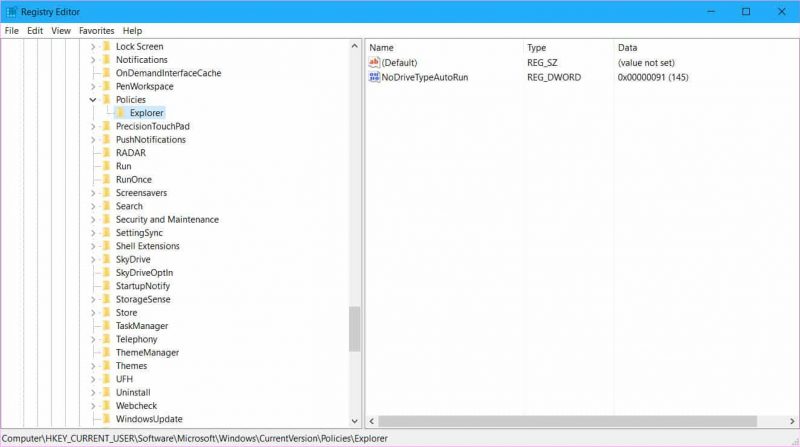 Back when Windows Phone 8.1 was announced fans were super excited and wanted a way to get their hands on this major update a.s.a.p because of the slate of useful features it promised to bring. However, before a WP update can reach your phone via the official way it must first get to your carrier. Then your mobile operator plans its own release schedule. And that can take time.

Luckily, Microsoft also gives us the possibility to receive OS updates, before they actually reach your carrier. This is possible through the ‘Preview for Developers’ program and while it may sound intimidating for someone with no coding skills whatsoever, you don’t actually have to be a developer to join the program!

Since WP 8.1 arrived, Microsoft continues to push minor updates, bringing new, cool features (such as the ability to group multiple tiles into Live Folders on your Start Screen). As a result, getting prerelease updates can still come in handy if you want to get all the good stuff fast.

Windows 10 is getting closer as we speak and if you’re dreaming to be among the first people to try it, there’s no other way for us mortals except joining the ‘Preview for Developers’ program.

What is the ‘Preview for Developers’ program?

The main purpose of the program is to offer WP developers prerelease operating system updates fast so they have enough time to test their apps on a phone running the update before the general public receives it.

Microsoft is also aware that plenty of carriers like to take their time when it comes to making official OS updates available to their customers so they set a low bar when it comes to who can join the program. Because here’s the catch – you don’t actually have to be a registered WP developer to get prerelease updates. In fact almost anyone can get them (we’ll talk requirements later).

What’s the difference between a prerelease update and an official one?

The only major difference between these two methods is the official updates also include a firmware update, which ‘Preview for Developers’ does not. Bottom line:

What happens when an update you already have rolls out officially?

Your phone’s OS is already updated so you’ll get just the firmware update. Simple enough right? Once you get that firmware update it really won’t matter that you used ‘Preview for Developers’ to get an OS update – your phone will be the same as of those who waited for it to arrive from their mobile operator.

There’s no risk of data loss – everything stays there – photos, apps, music, documents…etc. – , except you get all the new features, improvements and bug fixes that come with the update.

How to join the ‘Preview for Developers’ program

As I mentioned before you don’t have to be a developer and pretty much anyone with a WP 8 handset can enter the program.

1. The first thing you need to do is to register as a Windows Phone developer (if you’re not one already of course). To do so, go to appstudio.windowsphone.com and sign in using your Microsoft ID. 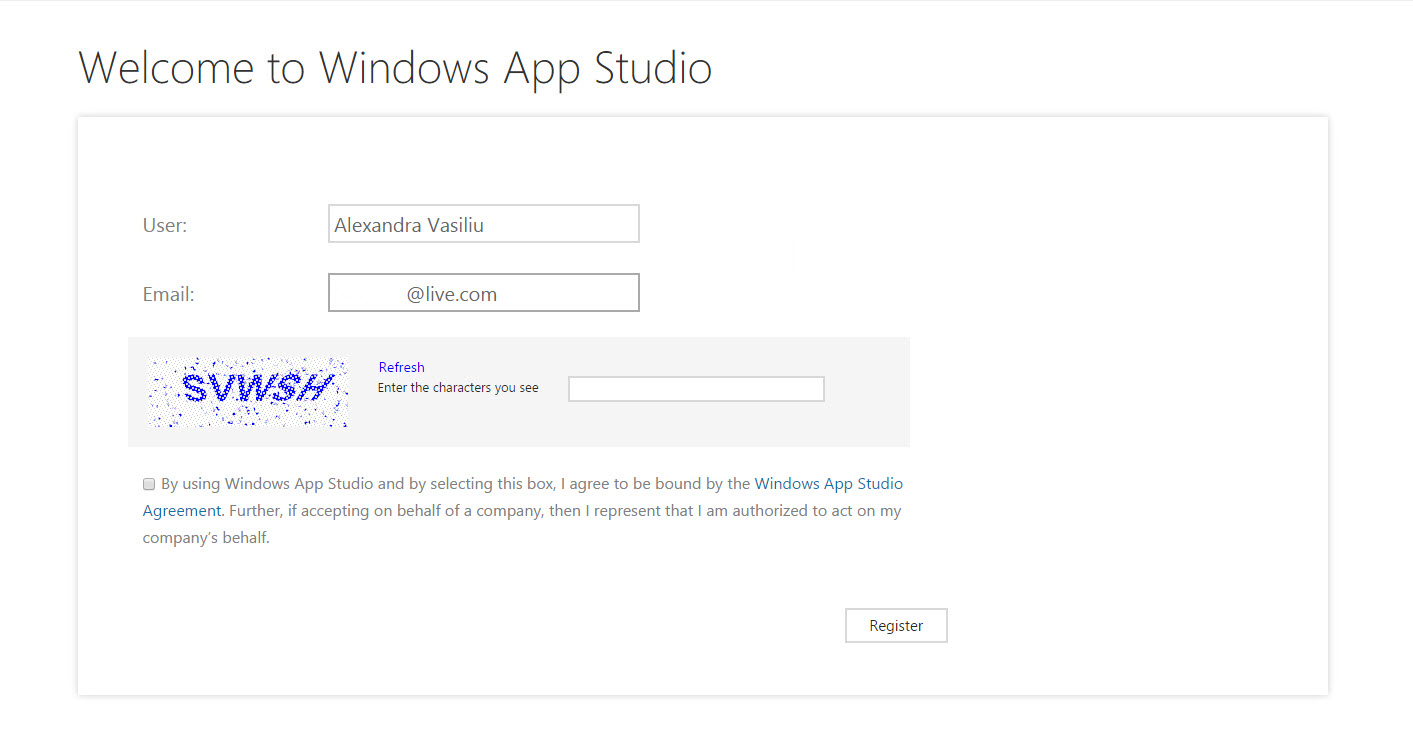 2. Now you can install the Preview for Developers App from Windows Store. One thing you need to do is check if your phone’s OS version meets the app’s requirements (Settings -> About). Right now it should be 8.0.10322.71 or higher but that can change so be sure to check the official app page whenever you want to install it on a phone. 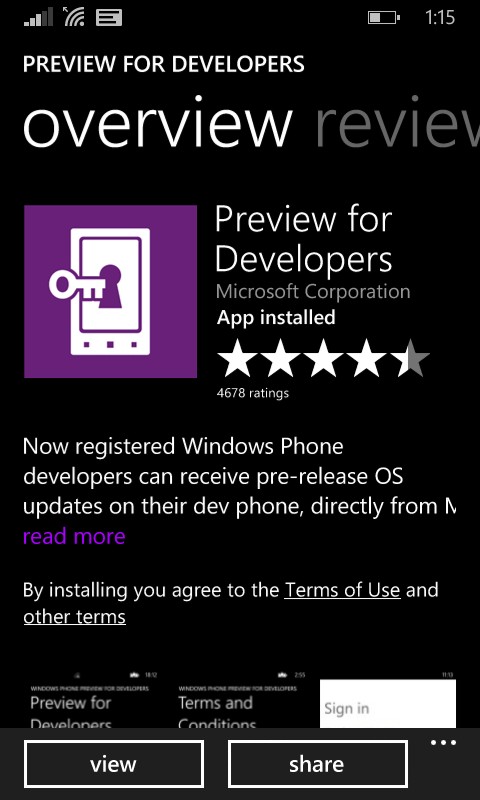 3. Run the app and use your Microsoft ID to sign in. The app only gives you one option (the only one you need, actually) – ‘Enable Preview for Developers’. Once check the box, you’re in the program! You can uncheck the box at any time you want to stop getting updates. 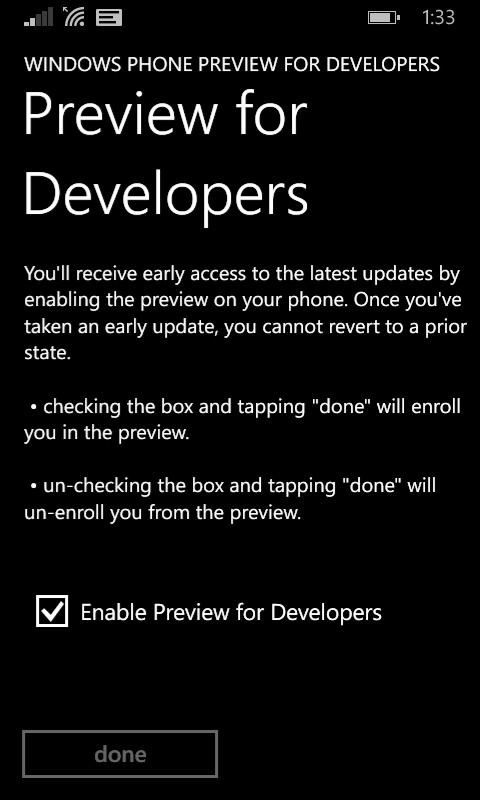 4. Go to Settings -> Phone Update and use the ‘check for updates’ option to see if there are any pending. 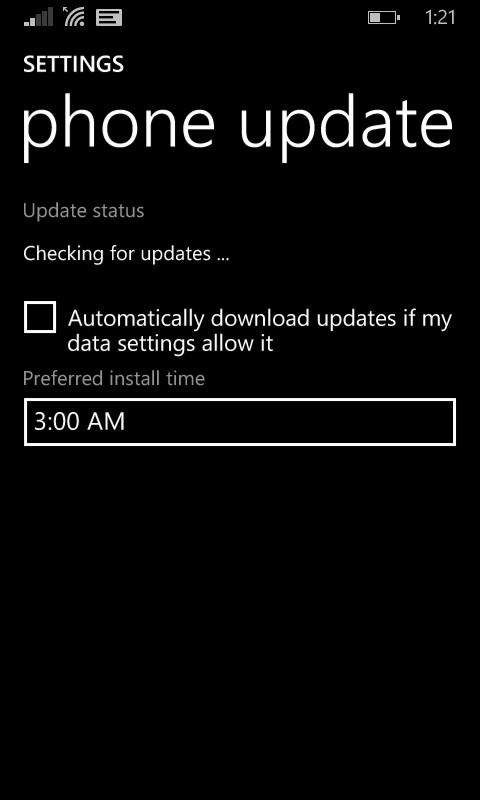 Wi-Fi access – It’s best to have a reliable Internet connection to ensure downloading & installing the update(s) goes down smoothly.

Charged battery – Full would be ideal but it should be at least 50%. Updates can take quite some time.

Free storage space – Before installing, the update needs to be downloaded and unpacked. At least 1 GB of free space on your phone is a must.

Note: Your phone may be several OS versions behind so after every update installation you perform I recommend you check for updates again until no more are detected.

Are there any risks?

To be honest, the risks are the same as installing an official update. In theory, there’s always a chance something could go wrong. Since prerelease WP updates are in fact offered by Microsoft it’s not like you’re hacking your phone or feeding it suspicious third party software.

The fact that Microsoft is making it so easy to join the ‘Preview for Developers’ program is saying a lot by itself. Another important thing to consider is that these updates are provided for developers so they can test their apps. It has to work properly, so when the official release hits, Windows Store is already packed with apps that support it.

The biggest problems that can arise are usually caused by not fulfilling the above listed requirements. For example, I’ve seen users having problems because they attempted to install updates without meeting the minimum free storage space which resulted in plenty of errors. This can also happen with an official update. You’ve been warned!

The ‘preview’ update is still under testing so it may have not been optimized for your phone’s hardware and mobile service. Some bugs can occur.

Installing prerelease updates can void your warranty, depending on the terms imposed by your mobile operator and OEM. If you want to stay on the safe side, contacting your carrier to ask for information on the matter would be a good idea. However, once everyone gets the same update via official channels, your phone won’t be any different than everyone else’s. Unless other problems appear, we’re talking about a temporary warranty void.

Can you revert to a prior OS version?

Microsoft says no – in the Preview for Developers app description and the official webpage for AppStudio. Still, they give us a way (there’s always a way right?) – at least for Lumia phones.

The tool is easy to use – you’ll need a Windows 7 (or higher) PC to install it – but using it will erase all data on your phone, so you should do a backup first so you can easily restore it later. For now, this is the only way to roll back to a previous version of the OS (tutorial coming soon!).

Hopefully, this guide helped you make an informed decision on whether you want ‘preview’ updates on your Windows Phone or not, with all the implied benefits and risks.

Are you already in the ‘Preview for Developers’ program? Have you been experiencing any problems? Let us know how it works for you in the comments section!

If you want to stay updated with the latest on apps & game reviews, news, tips and how tos for Android, iOS and Windows Phone, feel free to follow us on Pinterest, Google+, Facebook and Twitter  (and pin this article if you like it, so you’ll easily be able to reference it later).