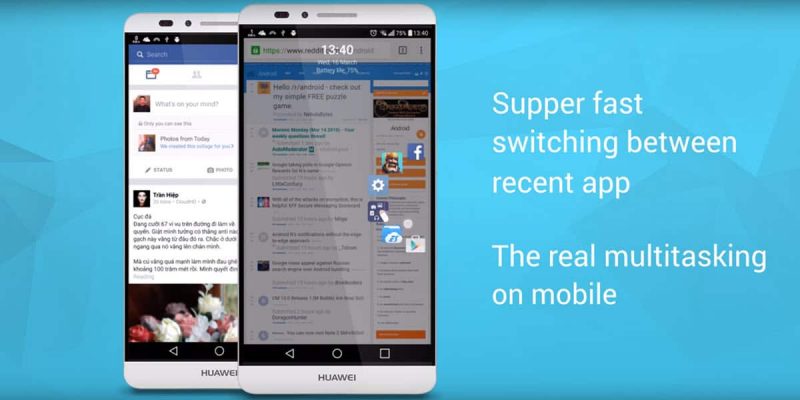 The Galaxy S7 Edge has an exclusive feature known as the Edge Apps, which offers quick access to a custom list of apps. All you need to do is swipe in from the edge of the display and this capability has become so popular, third-party apps have appeared to offer it on other Android devices.

As a result, you can get Samsung Galaxy S7 Edge Apps feature on any Android, but most of these apps are not quite as functional (or good-looking) as the original feature. However, a particular one, called Swiftly Switch stands out.

It’s not just functional, it’s also customizable to the smallest detail, so you can easily set it up to suit your preferences. Here’s how it works.

Get Samsung Galaxy S7 Edge Apps feature on any Android

Swiftly Switch comes in two versions – a free one with limited features (perfect for testing the app, though), and a $1.99 premium version that lifts those limitations and lets you use all of its features. You can download any of the available versions from the links below:

After the app finishes installing, it will require a few special permissions. From the main screen, tap on the ‘Step 1: Usage stat‘ option. To continue, select ‘Go to setting‘, then ‘Swifty Switch‘ and toggle on the ‘Permit usage access‘ option. 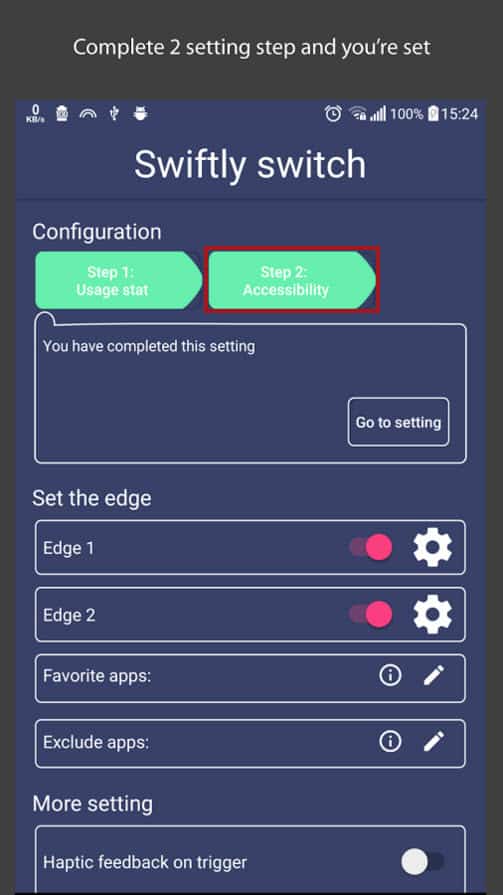 Now hit the back button once and tap on ‘Step 2: Accessibility‘, then select ‘Go to setting‘ once more. On the Accessibility settings screen, tap on ‘Swiftly Switch‘ and enable the second option.

Now that you’ve granted the app the needed permissions, you can personalize your edge launcher. Tap on the gear icon next to the Edge 1 option and you can adjust settings for the trigger area location, but also tweak its sensitivity and size. Tap the OK button to apply the settings once you’re happy with the configuration.

The Edge 2 option lets you add another trigger area, and you can modify the same settings like for the first one.

The app lets you access an arc-shaped menu with your recently accessed apps by swiping in from the edge of the display. If you hold your finger over any of the app icons, another menu will appear showing a list of apps you can customize. This one is called the ‘Favorite shortcut’.

Tap on the edit button next to ‘Favorite shortcut‘, to customize the list. Then, you’ll be able to adjust the space between shortcuts, distance from the Edge and the grid size.

You can also add other apps to the first menu that’s displayed when you swipe in from the edge of the screen and replace the recently used ones by selecting the ‘Pin apps to recent‘ option.

Assuming you’ve added all the apps you need to your edge launcher, you can start customizing its appearance. The related options are found in the ‘More setting‘ pane, where you can apply icon packs, toggle on haptic feedback and change colors. There’s also the option to disable the persistent notification. Just tap on it and select ‘Block all‘.

With everything set up, you can finally swipe from the edge of the display to open the arc-shaped launcher. Drag your finger on top of an icon then release to launch an app. You can also drag your finger outside the arc and access navigation controls.

Lastly, the Favorite shortcuts menu can be accessed by holding your finger over any of the app icons.

As you can see, it is possible to get Samsung Galaxy S7 Edge Apps feature on any Android and while it’s not 100% the same, Swiftly Switch does offer some neat options and is highly customizable, so it’s worth going through the setup just to get everything right.