Good2Go, an app for documenting sexual consent, hit the app stores two weeks ago, raising two-fold impressions. Several days ago, Apple App Store has removed the app on grounds of developer guidelines that state “apps that present excessively objectionable or crude content will be rejected.”

Even though Google Play did not request the app be removed, the developer company has voluntarily disabled the Android version as well, having put a lid on collecting user data. If you haven’t heard of the app, yet, you should keep an eye on the story, especially if you have college aged kids because the revamped version of the app is scheduled to re-submission to both app stores in Spring 2015, and its main target audience still remains college students.

What the Hype Was All About?

Let us see what made public opinion buzz with suspicion. Say, you are a college kid looking to have sex with a peer, but we all know the shaky ground that is under the microscope of college rape cases and the new explicit consent law adopted in some states.

Good2Go lets guys and girls document their verbal consent to have a sexual intercourse in the app, to have proof the consent has been given. Here is how it works. If you are the person to initiate the discussion, you download and install the app on your smartphone. It was free, and required a registration with your name and phone number. When you bring up THE subject with your potential partner for the deed, you give her, or him, your smartphone with the Good2Go app launched. The person then needs to answer a series of simple questions and submit the answers with her or his phone number and name.

The questions are rather simple, but the entire questionnaire took five to ten minutes to complete. They were – ‘Are we good to go?’ and three options to answer: No, Thanks; Yes, but … we need to talk; and I’m Good2Go.

The next screen requires the respondent estimate her or his level of intoxication, which ranges from Sober to Pretty Wasted. In the latter case, the app would not let the respondent register an affirmative consent for the deed. Then, the respondent submits her, or his, name and phone number, and is asked to sign in if it’s an existing user, or suggested to create an account if it’s a new user. The app finalizes the questionnaire with a reminder that ‘No means no,’ and the affirmative consent can be revoked at any time. Voilà, the two are good to go.

The app was created in an attempt to help prevent rape and fake rape accusations in the college campuses, and since both problems exist with no viable solutions, the attempt deserves some credit. What it does not deserve, though, is praise for the execution. Let us see what it actually did and did not do: 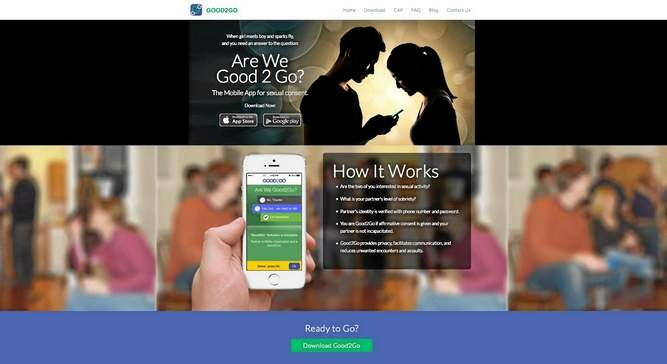 If anything, Good2Go could benefit the rapist, not the victim

Yahoo Tech provides an example of a college student who gave her consent for the deed, which quickly turned into a hardcore rape, and college authorities have been declining to review her case for months. Imagine what chances the girl would have had if her verbal consent were registered on Good2Go servers.

In other words, the app was created to protect the boys, or anyone initiating the act, and did absolutely nothing to prevent rape, or protect victims.

Statistically, men who rape do not do this as a result of being intoxicated or drugged. They do this being perfectly aware of what they do is wrong, and they won’t be asking the victim for consent.

Finally, there are considerations of human relationships and values. The app was the idea of Lee Ann Allmann, a Mother of sons, and instead of teaching the boys how to build relationships with women, she came up with an idea how to formalize a verbal sexual consent for a quickie, so that no woman would be able to fake-shame them with rape accusations. I don’t see a Mother of girls come up with something as bad of an idea as that, placing the responsibility for rape on victims again.

Likewise, when young people have the mutual consent, formalizing it with an app and letting a third party, in decency of which they have absolutely no certainty, monitor their sexual activity and keep track of their partners, it can kill the mood. Obviously, there is no place for love in the little digital world of Good2Go. No matter what its advocates chant, it does not, or rather did not, provide any means to prevent rape, unlike Watch Over Me app, pepper spray or a taser.

By the way, check out our guide on how to turn your iPhone into a weapon for some portable self-protection ideas.

What are your ideas on the app? Any suggestions on how developers can improve the app? Can a mobile app help prevent rape at all? Share your ideas in the comments below.