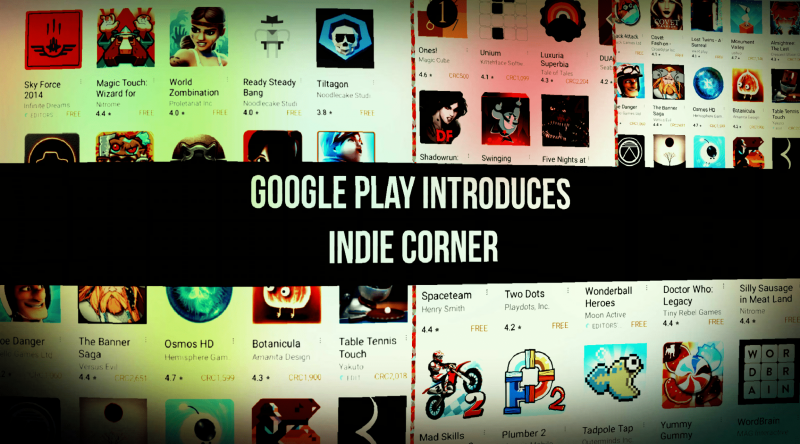 Google just held an annual Developer Day at the Game Developers Conference, and Android users, especially gamers, have a few interesting takeaways to muster. First of all, Google just rolled out a new section under the Games category – the Indie Corner. Finally the fans of the indie games will be able to browse their kind of games without having to weed through the tons of featured big fish. To find it, just launch Google Play, tap Games and scroll down through the selections like Multiplayer, no Wi-Fi, and such. The Indie Corner is down there somewhere; it’s not under the games’ sub-categories, yet.

We have taken a look at the Indie Corner, and it’s not without faults. First of all, there does not seem to be a “More” button, so when you scroll all the way down to the list that shows up initially, that’s it. Of course, most of the games currently occupying the Indie Corner page are well known to the gaming community, so you are unlikely to find anything new. That does not help address the discoverability problem in the least for the small indie studios and one-man teams. How, or whether, Google plans to address this issue yet remains to be seen, but in the Android dev blog article Google offered the indie developers a submission page, where they can nominate their games to be included in the Indie Corner.

There urgently needs to be an expansion of that section, so users can scroll all the way down to the undiscovered gems because otherwise the Indie Corner is kind of redundant featuring the acknowledged and the established. For example, on my end, out of 48 indie games in total it features 4 games from Nitrome and even one from Zynga. While I don’t mind one Nitrome game in my indie games list, a Zynga game seems out of the place completely. We have yet to see how Google sorts the apps into this category. You would think Indie Corner is supposed to let the under-funded but talented indies get some visibility, am I right?

Wrapping up with my grumble now. There is one very nifty feature that will be rolling out to Android within the next few weeks, according to Google.

Search Trial Run Ads is the new feature that will roll out to Android users searching for a game over Wi-Fi. If you use the Google Search bar to search for your games, you will see a new card in the search results next to the game – “Try now.”

Android gamers will be able to try a game for some ten minutes to decide whether it clicks with them and only then make a decision to download it. The Android dev blog did not specify whether this feature will let the users try out premium games that do not have a free demo, but it would make all the sense in the world. This would eliminate the trial and error process of downloading, installing and uninstalling the games that just don’t make it to your Favorite list.

This sounds like a very exciting feature, and we are looking forward to trying it out. If you are a thoughtful user, you probably weed through the reviews before making the decision. Try Now would significantly simplify the process, and let Android users make an informed decision based on the first-hand experience. In case you dislike what you see in the Try Now window you just don’t install the game.

Likewise, it would hopefully decrease the propagation and success of bogus apps that fake famous games like GTA San Andreas and Subway Surfers that spread porn-clicking malware.
We don’t know yet if the Try Now feature will apply to the apps as well.

Developer Day also saw the announcement of a few more exciting features. For example, Google will be rolling out a video recording API for the developers to integrate the gameplay recording features into their games. The implementation, of course, depends on each individual developer or studio, but we are about to see an exciting quality change in the Android gameplay experience. The video recording feature will let gamers record their gameplay and share it seamlessly with their friends and subscribers without having to load their devices with an arsenal of third-party apps to do just that.

Another exciting announcement is the upcoming support of a gameplay live streaming functionality that will let Android gamers stream their gameplay live on YouTube. Sweet, isn’t it, YouTubers? 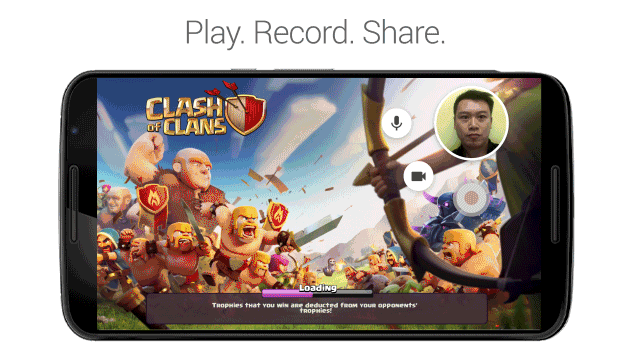 Not such an exciting feature for the gamers, more likely for the advertisers – Android will now support portrait-oriented video ads. According to Google, more than 80% of video ads views are on devices held in the portrait mode while the video ads are in landscape.

Google also shared an interesting insight about the growth of mobile gaming, “Over the past year, the number of games reaching over 1 million installs grew by 50 percent.” And that is Android-only. We are witnessing an exciting era – the time when mobile OS itself, games and applications evolve in giant leaps and all you can do is try to keep up. So, stay with PocketMeta to get the useful tips and guides for better productivity, our human-crafted reviews and applications roundups!