While there are various tools that allow you to run Android apps on a PC, it’s also possible to run Android apps in Google Chrome. Instead of installing a third-party tool, you just need to add an extension to your Chrome browser, something many users would prefer.

How to run Android apps in Google Chrome

While ARC Welder is a very convenient solution for running Android apps on your PC, some apps may not work well. This means you will need to test the apps you’re interested with to see which ones function properly and which don’t. To install Arc Welder go to its Chrome Web Store page, and click the Install button. The extension should work on any device that is able to run Google Chrome and Chrome extensions which means you can use it on Windows 10, Mac OS, Linux, and Chrome OS among other platforms.

However, since the app was designed for Chrome OS it will warn you that you may experience some “platform specific bugs” on other operating systems.

The next step is to get Android APKs, since these are the types of files ARC Welder was designed to open. There are several popular and reliable sites that host APK app files but to keep things simple we recommend APKMirror. The site has APKs for pretty much every popular and free Android app (including older versions), lesser-known apps and even apps that aren’t available in the Google Play Store. 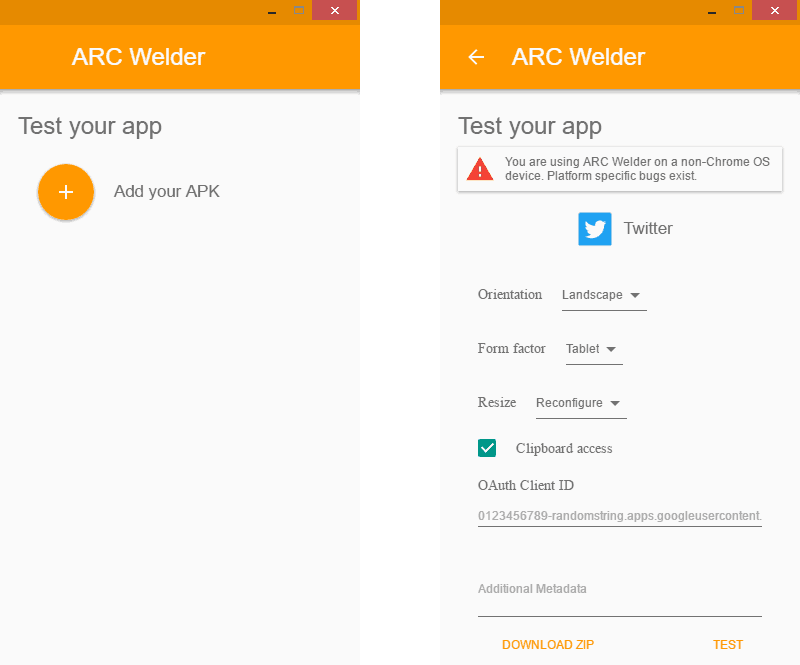 It’s worth mentioning that ARC Welder can run only one app at the same time. To run another app, close the current one, load the new APK, remove the old APK from ARC Welder and then run the second app.

As I already mentioned, some apps may not work properly in ARC Welder. We’ve had no luck with YouTube, Gmail, Facebook, and Google Keep but Twitter and Slack seemed to work perfectly.

Also, we tried a number of games but none of them have worked, likely because this extension wasn’t designed to handle such resource-intensive apps.