Struggling to make it through the lengthy and difficult campaign in Hail to the King: Deathbat? We’ve got seven great tips for helping you complete Avenged Sevenfold’s challenging mobile Action RPG. If you haven’t make sure you take a look at our full review of the game, and then come back and check out our tips! Now, let’s get started.

#1 – Save up for the Lightning Weapon first

Aside from buying a lot of potions, upgrading your max lives, HP, magic, and buying shields — the only thing you can really spend your coins on is a new weapon. There are five weapons you can buy, but it’s best to just save up and buy the most powerful weapon (the lightning sword), so you don’t waste coins on weapons you won’t use later on. Granted, they do have unique magic abilities, but the lightning storm is still the most effective.

One thing about HP upgrades that you’ll notice, is that every time you respawn, you still only have 100HP. You either have to use one of your limited number of potions, or kill enemies/break objects hoping you find some HP. Because of this, you should work on the lightning weapon before upgrading your stats.

Early on, the levels aren’t too difficult, so you should be able to save up quite a few coins without having to buy a whole lot of potions. Still, you might not have enough to get all of the upgrades for a while, but you can speed this process up by re-playing the Bat Country level or any Bonus Levels you have unlocked. I’d say Bat Country is just as good as most bonus levels, but either one will provide you with a lot of coins — and you can play them over again and again. 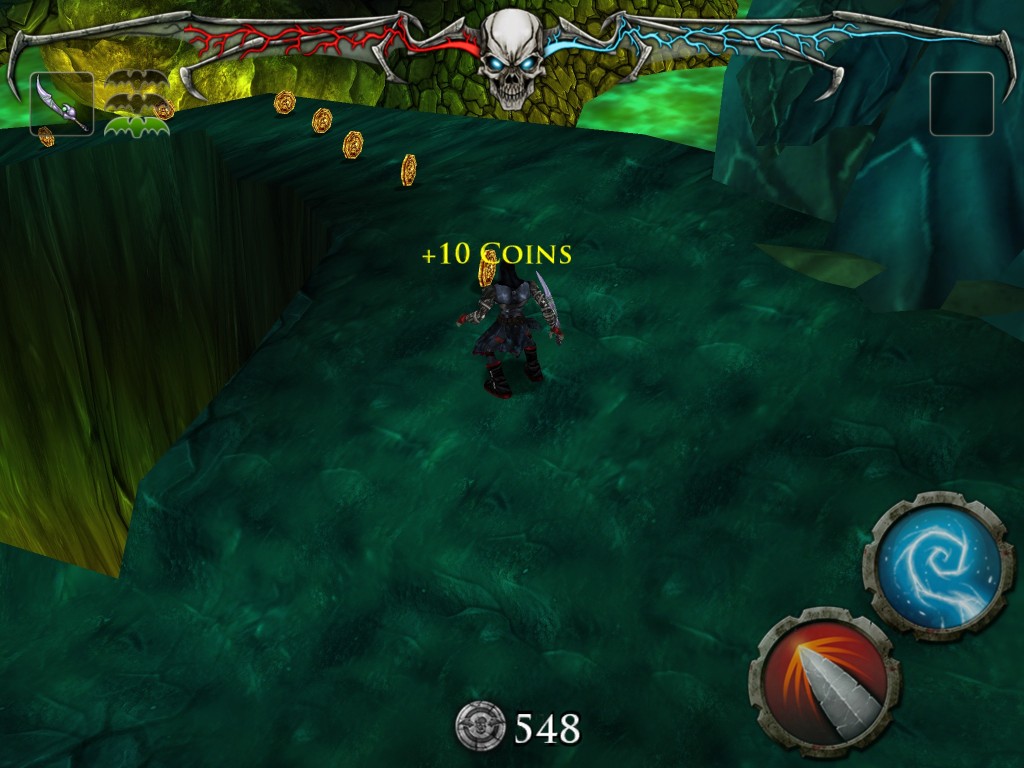 After you’ve defeated the boss in Bat Country, the cave with all of the coins remains open, so you can run straight there and start picking up the loot. You’ll easily get 500+ coins doing this, and since it doesn’t take that long, you’ll have a fully upgraded character with a lightning sword in no time.

Some enemies react differently than others to your attacks, you’ll notice one enemy will get in your face and attack you even if it’s getting hit, while others may slide back a few steps. Usually, enemies that get knocked back can still hit you if you simply stand still and swing your sword. However, if you hit them and push them out, and then quick take a couple of steps back, you can avoid getting hit and keep knocking them away. Other enemies may require you to run in a circular pattern to avoid getting hit while still keeping damage consistent.

The game has a lot of different obstacles that you will frequently encounter, regardless of what level you are on. Fortunately, nothing really changes about how you need to approach these obstacles. Floor Spikes will pop up twice, the second time being immediately after the first, so you should stop and wait for the second spike before trying to cross. Swinging Cleavers are consistent, and you can actually run into the side of one and your character will run through as soon as it’s safe — just be careful not to run too far and get hit by the next one. 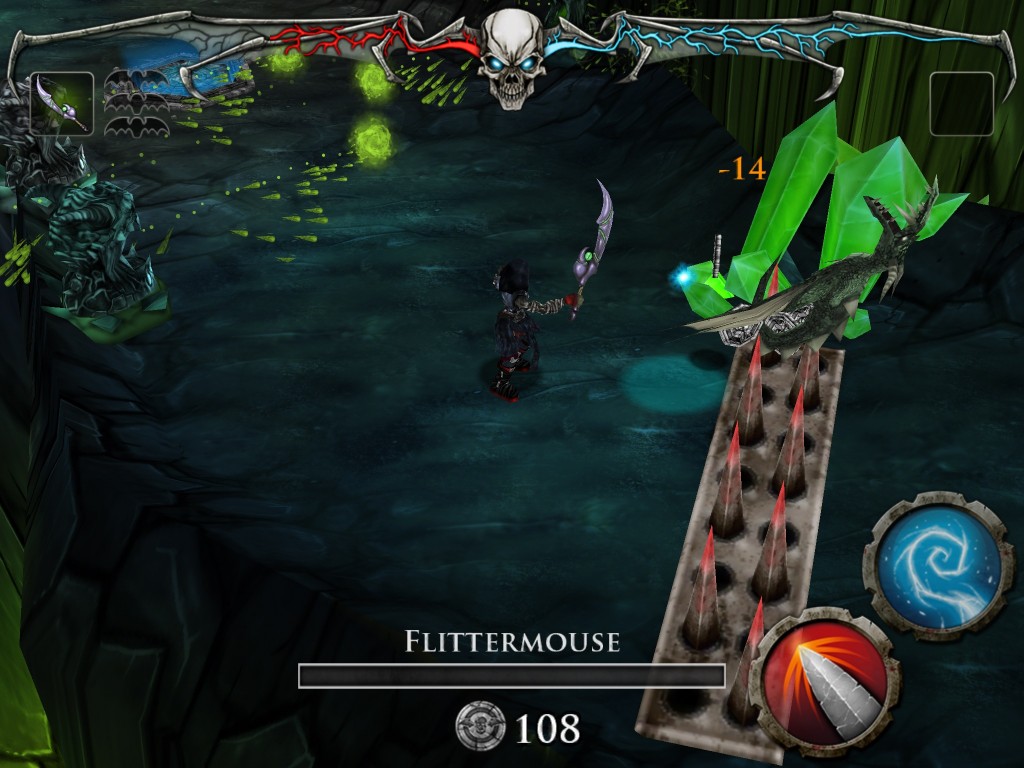 Acid Balls are shot in specific directions, and the best way to deal with this is to find a small open spot and run to that spot. Try to make sure there are only two possible acid balls that could hit you in that path, so you can avoid them easily. Most Bridges fall apart if you stand on a certain block too long, so don’t try to stop and break the barricades on the bridge — just run around them.

Every level has several magic fountains that will replenish your MP (if only there were HP ones, too), because of this, you should try to use your magic as much as you can to mitigate damage. You are always vulnerable when using melee, so if you can avoid it, why not? Always charge your magic attack when fighting big groups of enemies (3 or more), as this is the most effective way to use it. Powerful weapons have large AoE magic attacks, which make it easy to hit every nearby enemy.

#6 – Stock up on potions before each Boss

You’ll notice that once you’ve reached the boss in each level, you can then teleport between the beginning and the end of the level. Because of this, there’s really no reason you shouldn’t stock up on potions before fighting the boss, unless you’re confident you can defeat it with what you’ve got. There’s no real harm in trying first, and if things are overwhelmingly difficult, go back to the crypt and stock up on potions and shields. 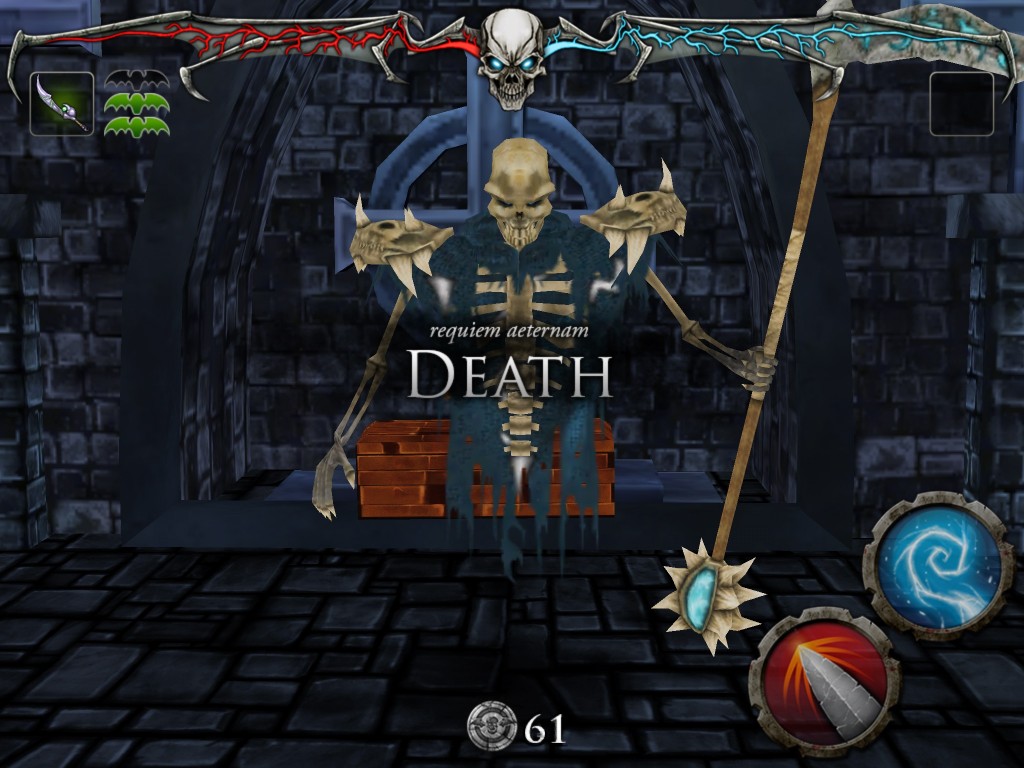 Health Potions and Elixirs are always useful, but magic potions can be especially effective during boss fights. Likewise, there are times where you can’t really count on your magic to save the day. Regardless, they are cheap and will get used eventually (plus coins are easy to farm), so no reason to not give yourself the biggest advantage.

There will be times where you die early in a level for whatever reason — maybe you fell off a ledge, put the game down and came back dead, or you just had some really bad luck with obstacles. Depending on how many lives it usually takes you to finish a level, and how many you’ve purchased, it can be beneficial to simply run out of lives so you can restart the level with a fresh set. Typically, one death is nothing to be concerned about, and it will take a while to kill yourself multiple times, but if there are two or three early on you may want to consider it.

Thanks for checking out these Seven tips for success in Hail to the King: Deathbat! If you’ve got any questions, feel free to let us know via the comments section below. You can also seek help from the Pockemeta community by heading over to our forums!