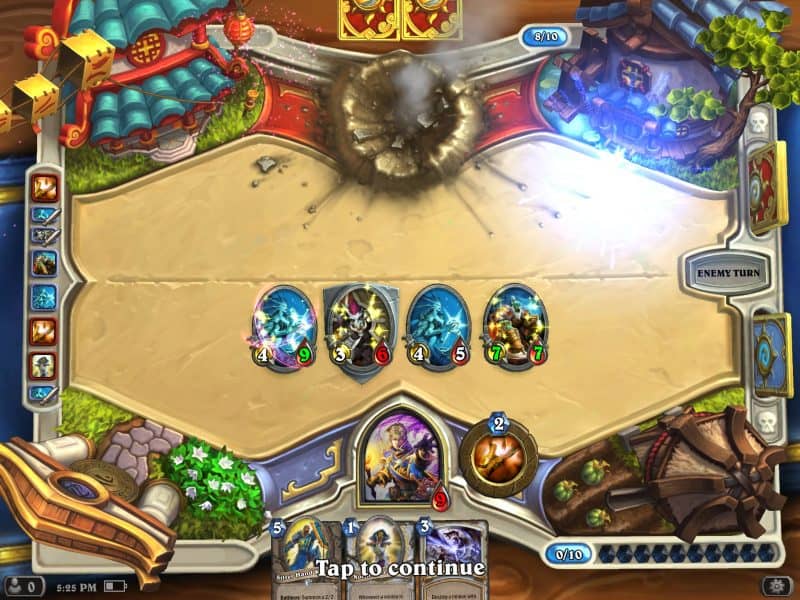 If you’re tired of getting beat match after match in Hearthstone, then maybe we can help. Below you’ll find a handful of useful tips and tricks that can be implemented to ensure you start winning some games, and if you lose, you won’t go down without a fight. Obviously it’s not easy to win with a basic deck filled with weak cards, which is why we’ll also cover how you can get your deck looking better, and more importantly how to make it more powerful. Oh, and if you haven’t yet, make sure you check out our full review of Hearthstone: Heroes of Warcraft!

One of the biggest mistakes made by new players, is that they will spend thousands of coins on packs of cards. Don’t get me wrong, you can score some pretty useful additions to your deck this way, but it’s much better if you use your coins on arena entries only. By participating in the arena, you’re guaranteed a pack of cards at the end of your run, and even though it costs an extra 50 coins to play in the arena — you have the chance to unlock much better rewards that are worth a whole lot more than 150 coins can buy you via packs. Not to mention you’re going to continue to improve in the Arena mode, and the better you play, the better rewards you receive. 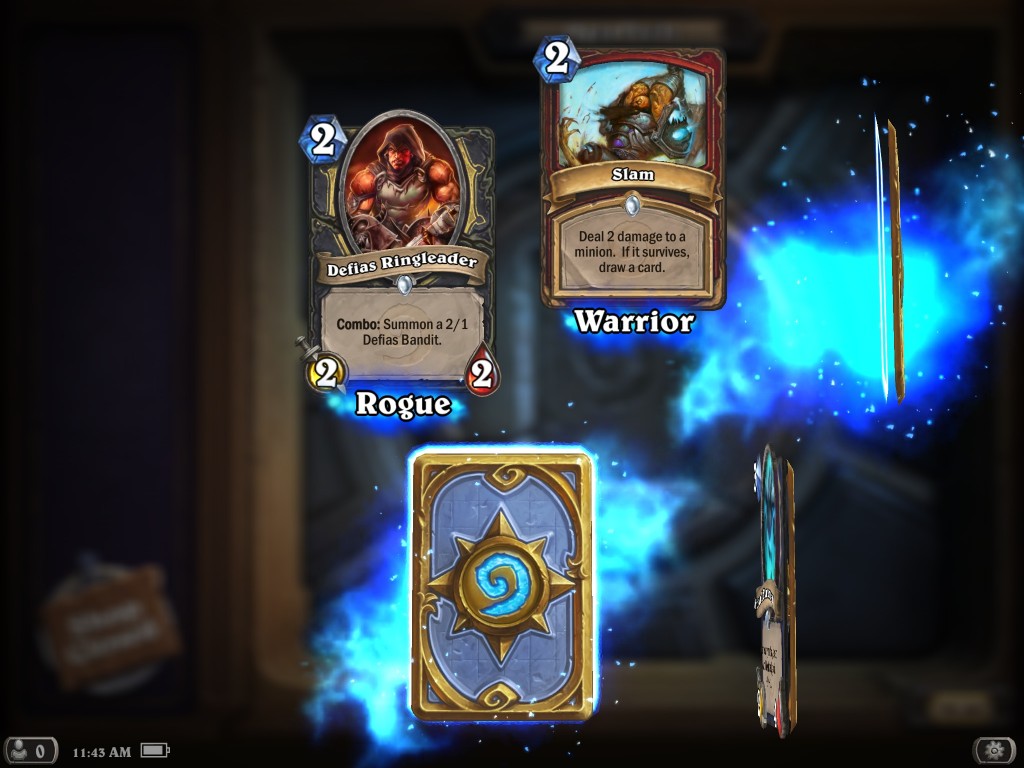 Tip #2 – Learn the Classes and their Cards

This is probably the most difficult and time consuming tip, but definitely the most useful. Each of the nine different classes is going to have a different hero power, as well as different unique class cards in their deck. If you don’t know what to expect, but you opponent knows the ins and outs of most standard decks for your class, you are already at a major disadvantage. Obviously the Hero Power isn’t a huge deal since you can just look at your opponent’s power during the match, but the cards are the real issue here. For example, Druids have a card that restores 8 HP, and most of them run two of these cards because of how powerful it is.

You may be in a situation where it looks like you can go for the kill in the next two turns, but against a Druid, you could see their HP shift +16 in just a single hand. With that in mind, you may want to consider playing your hand a bit safer — and this can be the difference between a win and a loss in many situations.

Three classes in Hearthstone have a special type of card called a ‘Secret’, which is triggered by a certain action — either by you or your opponent, depending on what the card says. Currently, only the Hunter, Mage, and Paladin have secrets, so it’s not hard to learn them, and you don’t even need to worry about them against any other class. Whenever a secret card is played, you’ll be notified, but you won’t know what it is — however, since there are a limited number of choices to what the secret could be, you can easily narrow it down and plan accordingly. Paladins are the easiest to predict, as they only have four secret cards. You can find a list of all secret cards here.

Tip #4 – Crafting is your Friend

If you aren’t already using the crafting system to create new cards, you are really missing out. Hearthstone’s Crafting allows you to turn your extra junk cards into essence that can be used to craft a new card of your choice. Be aware that you can’t disenchant a card and receive the same amount of resources that you used to create it, the return will be much lower, so be careful when crafting cards and make sure you only create ones that you actually want to use. Likewise, you should never disenchant a card if you have to think about it for a while first — don’t do anything you might regret. 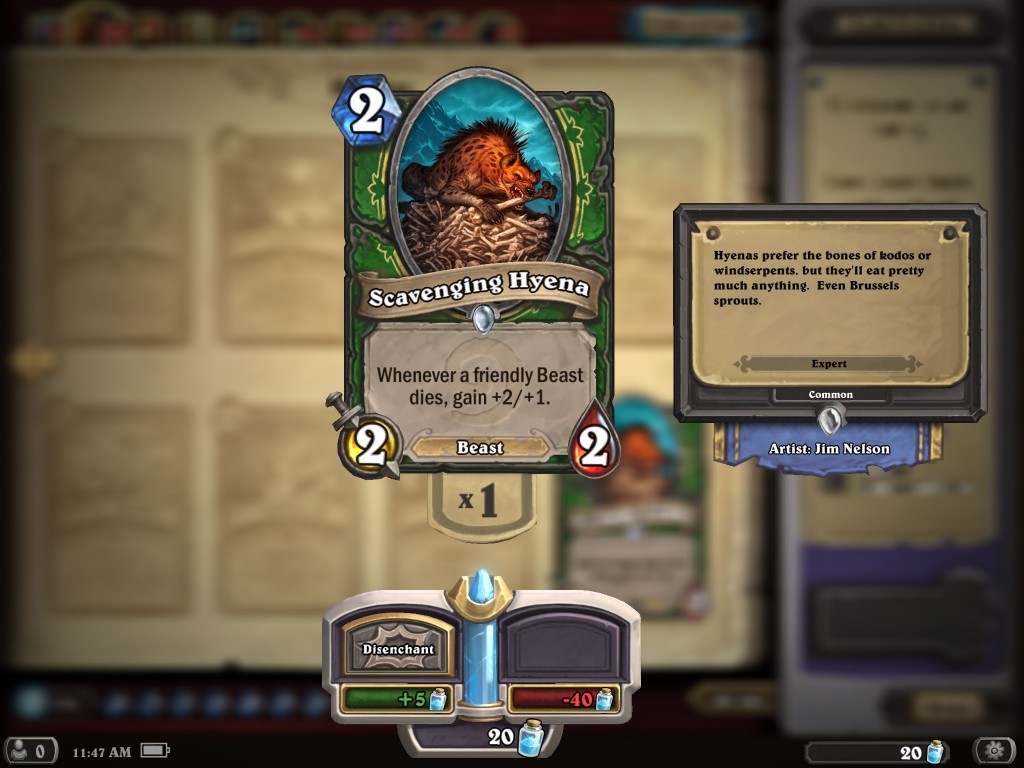 You can see the crafting costs/disenchanting rewards at the bottom of the crafting window for any individual card. In the above image, you’ll notice there is a +5 essence for disenchanting, whereas the card costs 40 essence to create. Note: not all cards have the same essence costs, so be aware.

If you rush through every hand, your chances of winning will decrease. There were so many times that I would notice a bad move I made 10-15 seconds after my turn had already passed, and it was simply because I wasn’t looking closely enough at the situation. For example, if you have a 2/2 Taunt Minion and your opponent has a 5/2 regular minion, you’d most likely want to attack the opposing hero instead of taking out that minion at the cost of your own. By doing this, your opponent is forced to either use an ability, a charge minion, or their 5/2 minion to take out your taunt minion — this comes in addition to the damage their hero took, since a hero won’t damage a minion that attacks them. Sometimes this can backfire, but if you know your opponent’s hero well enough, you can weigh the risk of either decision much better.

Click here to check out Pocketmeta’s Review of Hearthstone: Heroes of Warcraft

Click here to check out Hearthstone: Heroes of Warcraft on the Apple App Store

Thanks for checking out these tips! Let us know what you think in the comment section below, and be sure to add any of your own tips and tricks as well!