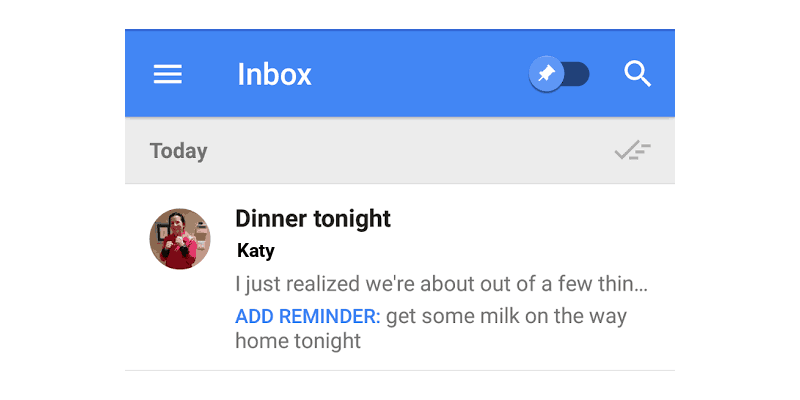 Inbox by Gmail is one of the younger projects Google is currently working on, and it offers a different kind of email client – one that focuses on streamlining basic tasks. At the end of May, the app became available to everyone, as before that it used a rather unusual invite only system.

The latest update adds another unique feature in the app, and you’re probably going to appreciate it, if you’re also using Google Reminders. Inbox now suggests reminders using natural language. The app automatically analyzes the contents of an email and if it concludes a reminder can be set, it offers it as a suggestion.

Just in case you’re unable to picture how this works, Google offered us a real-life example. Say you get an email from your wife in which she’s asking you to buy some milk on the way home. Inbox is using natural language understanding technology that allows the app to detect such to-dos contained by emails, and it was also designed to continuously improve based on user feedback.

Furthermore, Inbox by Gmail now integrates with Google Keep. Create a reminder in Keep and Inbox will display it along with a link to the full note in Keep. Like I already said, anyone can download and install Inbox by Gmail now, so if an alternative to the Gmail client sounds tempting, head over to the Play Store to give Inbox a try.