Sleepy Time Sounds by Brad Wells is a free and quite simplistic app that will set your brain at ease and help you relax, detach from your pending tasks, and regain focus, daydream or fall asleep.

If you are noise sensitive, you probably have difficulty falling asleep when the neighbor’s shrieking toddler or an undisciplined dog is driving the entire neighborhood crazy. Sometimes you need a five minute distraction from work to reset your brain; sometimes you can’t get the work out of your head when you need some rest at night. Whichever is your case, this little app is a fast fix for those having trouble relaxing. You won’t need earplugs and music, which may be more distracting rather than soothing to sleep. How about listening to the ocean waves, or rain instead? It’s not raining tonight, and you’re not living in the Pacific coast beachfront villa? No problem. Sleepy Time Sounds may be far from being the only app of its kind, nor it is the best of its kind, but it is a worthwhile one for sure.

It was obviously designed with a good night’s sleep in mind, and one of the best virtues of its simplicity is it requires minimum customization effort on your part. You install the app, launch it and select one of the few sound effects – wind, rain, fire, meadow, chimes, ocean waves, nature sounds, white noise and city ambiance. 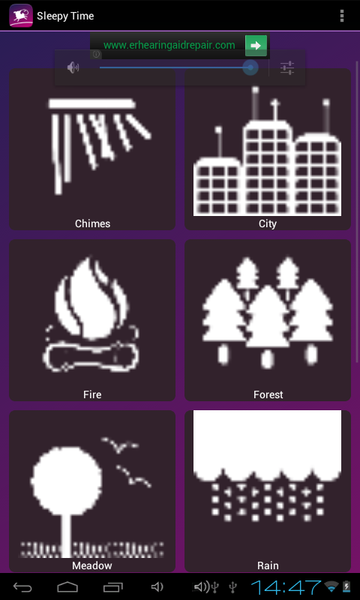 Once you select a sound, you can mix it with the other sounds, or mix them all if you like, but that would make an odd choice.

The UI is really simple, so you won’t have to sort out anything before you turn it on and doze off. The design is both visually appealing and simplistic – just the right thing to avoid distractions, but send you directly off to bed.

You enable the sound by tapping on it, and it starts playing right away while you can adjust its volume using the slider. You also have the option to set the timer, so that the app shuts down by the time you have hopefully fallen asleep. 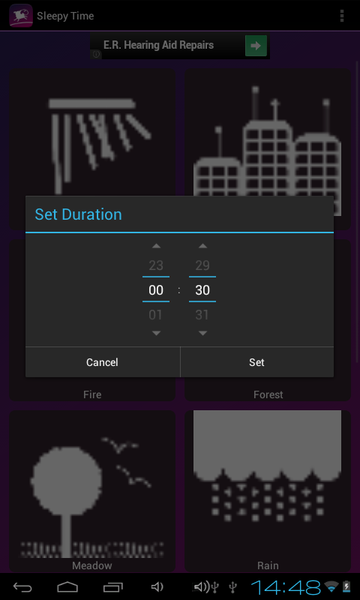 That’s it, the settings are scarce, and so is the sound selection, but it’s a great choice for those who appreciate sophisticated simplicity. There are no in-app purchases, but occasional ads, which are non-intrusive. By the way, the ads are the reason why the app needs network connection. The other permission it needs is to mute the app if you receive a phone call while the app is playing. Voilà!

Sleepy Time Sounds is an easy choice for the right user – if you are looking for a lightweight, non-intrusive, functional and simplistic app that would play relaxing nature sounds into your ear as you fall asleep, the app may jus be the right choice. It is free, ad supported and quite minimalistic. It would be great to see an update with more customization features and sound packs, as well as an option to save your custom presets, so that you could load them the next time. Overall, the app has a great potential, and is good the way it is now, although it does feel a bit raw.