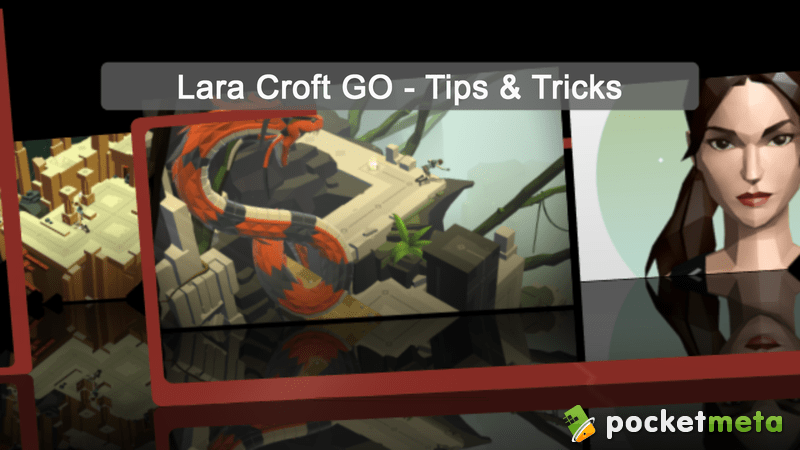 Lara Croft GO made a spectacular entrance last month (read our review). It won over the skeptics’ affection, but it also made a few strong statements about and for the mobile gaming industry. Number one – the premium model is as strong as ever, despite the panic the freemium avalanche created a few years ago. Number two – a blockbuster-based franchise is a ripe field for risky and experimental moves, when treated with respect and talent. And number three – as one of our readers noted, a game can look as if it could not get any better without chasing the console quality realism.

Below is our modest compilation of tips and tricks for Lara Croft GO that might help you advance faster. If you have any questions about particular levels, feel free to ask them in the comments section below. We will do our best to find the answer. 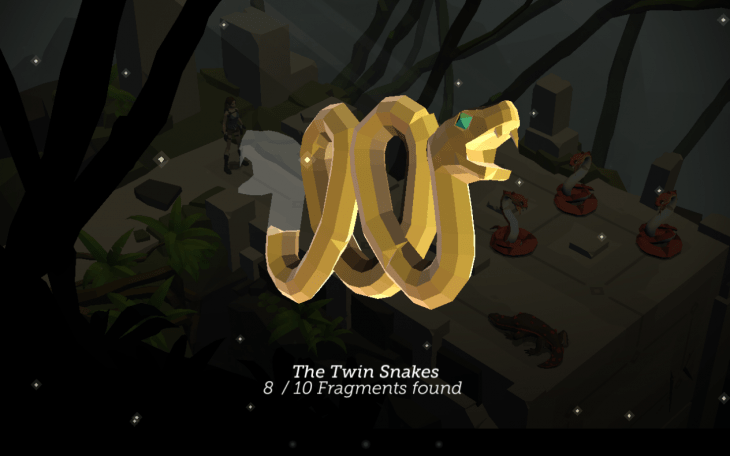 This is something I wish I would have known when I first started the game – don’t rush. Launch the game, look around, try things out. Lara Croft GO is not a time-based chase, and no level obliges you to think of a fast walkthrough. The reason I advise against passing through the initial levels fast is simple – the vases. The darn jars are very well hidden and sometimes take a good look to spot. I did not know this. Hence, I missed quite a few pots because I did not know how important they were.

Sometimes, I would spot a jar too late when Lara was already heading out the exit arc. Bad move. You can not tap and break the relic-containing jar when the protagonist had passed the checkpoint.

Why you want the jars? They contain the pieces of the relics or the precious stones. Why you want the relics and the stones? Simple. Each chapter has a set relic and a set amount of gems you should collect in order to unlock a new outfit for Lara Croft for free, without paying. Otherwise, if you have the itching to clothe Lara in a fancy suit, you have to pay $2 to buy them all. This might not be an expensive purchase for a cosmetic improvement for the fans of the developer. On the other hand, the perfectionists will want to unlock the relics and the stones on their own – that’s just how their nature goes. 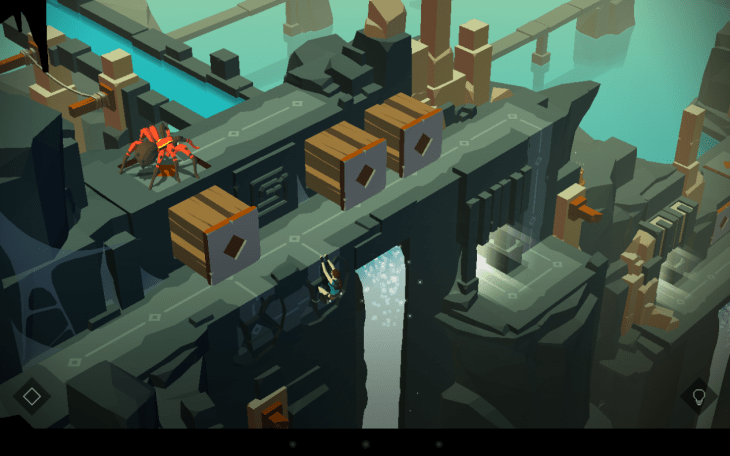 Lara Croft GO is a turn-based puzzle. This means you take one step a time and see what happens. Normally, the environment responds to your moves – the reptiles, spiders, snakes, saws and platforms start moving, biting, following you or breaking. Your aim is to use that seeming cacophony to your advantage and get from the entrance to the exit checkpoint.

The worst of them. Not because they’re hard to figure out, but because I had to watch Lara get cut in pieces. The first time I saw a circular saw, I thought the idea was to get past it as soon as possible. I’d sent Lara to a nasty death. Then it dawned on me the trick is not to move fast, but to watch the saw move in response to Lara’s moves. You need to calculate at which point it would be timely to step on the saw’s limited trajectory, which is the moment it is the furthest from Lara, so that she has enough moves to get off the trajectory alive. 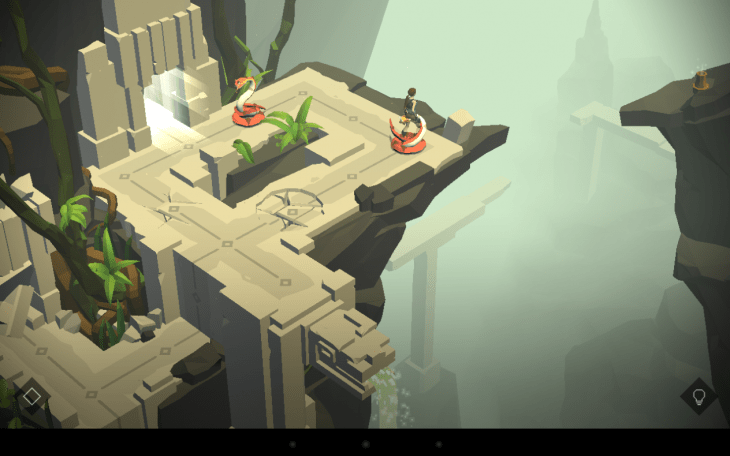 Next up in line is the cracked tile. Step once and you are fine. Step twice and it breaks. The outcome largely depends on your location in respect to the surrounding environment. If there is an abyss below the cracked tile you will fall to your doom, but if there is a lower level platform you just fall on that. The cracked tiles are particularly helpful when an alligator follows you. Here is why.

The Alligators (or lizards, but who cares)

The alligators are the nasty kind – they follow Lara wherever she goes, literally. These spot Lara when she comes two tiles away from them. They do not take the short cut, but follow her every step, which means you can lead them into a trap, and the cracked tile is a perfect trap. Let Lara be the one to take the first step on a cracked tile and you will see the alligator follow suit and fall to its death. Alternatively, if the alligator falls on a lower level platform, it will no longer follow Lara. It seems these beasts can spot a target only once. The same tactic is true for the moving platforms and the circular saws traps – lead the alligator inside a trap, or on top of it and push the lever. Bye-bye, big gecko. 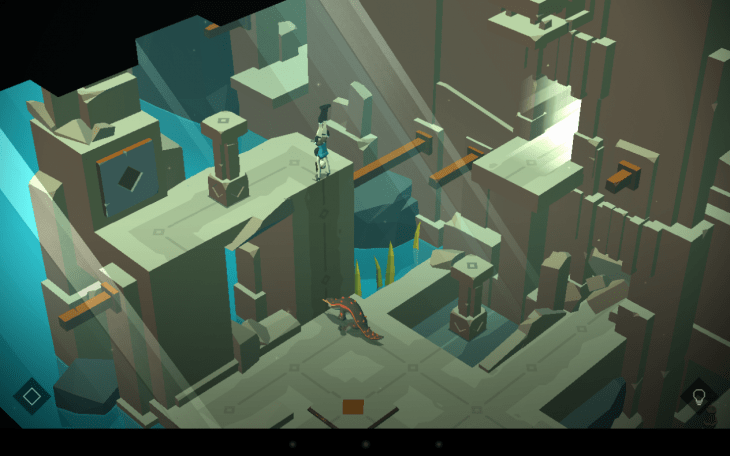 Snakes are easy, their placement is not. Even though they don’t move, and have a particularly poor hearing and sight, snakes present a lethal danger when confronted face-front. Lara needs to approach them from sideways or behind to shoot them with her guns. The latter are useless in the frontal attack – again, because it’s a turn-based puzzle. So, when your move is to step on a tile in front of the snake, the next move is the snake’s. It bites. Lara dies.

Many levels will grant one or two spears to slay one or two snakes from a greater distance. The game highlights the snakes that are in your range, but do not rush to kill the first one you spot. Take your time to figure out which one of them you won’t be able to approach from its side or back, and kill it with your spear.

Think outside the box. Be creative. Sometimes, a spear can activate a lever or a trap, not just kill a snake, so try things out. 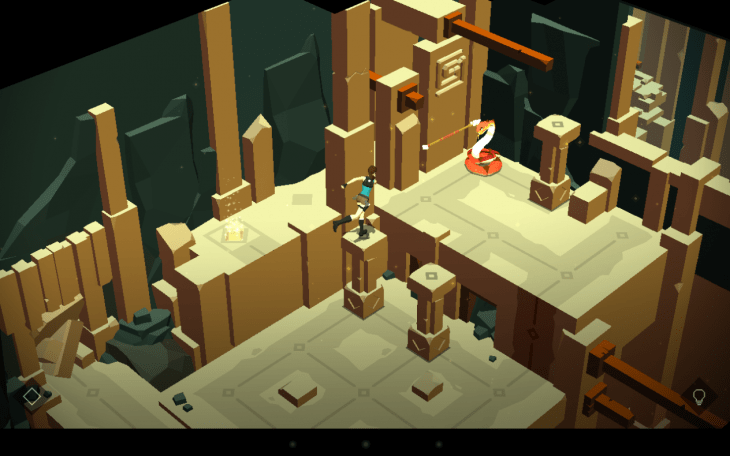 Here is another reason to take your time when you enter a level. Watch the spiders move back and forth along their limited trajectory and abuse their weakness. In some levels, you will be able to pull a lever and relocate a platform with a spider on it, locking it out of its path. So, it stays blocked and you can move about freely. In some cases, the spiders will step on button-tiles, and you will also use that mechanic to your advantage, so watch out not to kill a useful spider.

Tap on a column and watch the arrows that appear around it. You move the column by tapping on these arrows, not swiping Lara. Lara uses the columns to step from one to the other, to crush enemies and to build a sort of a staircase to reach higher platforms.

Pro Tip: Move The column onto a cracked tile to make it sink, and it might as well serve you as a constant, regular tile that does not shrink anymore. 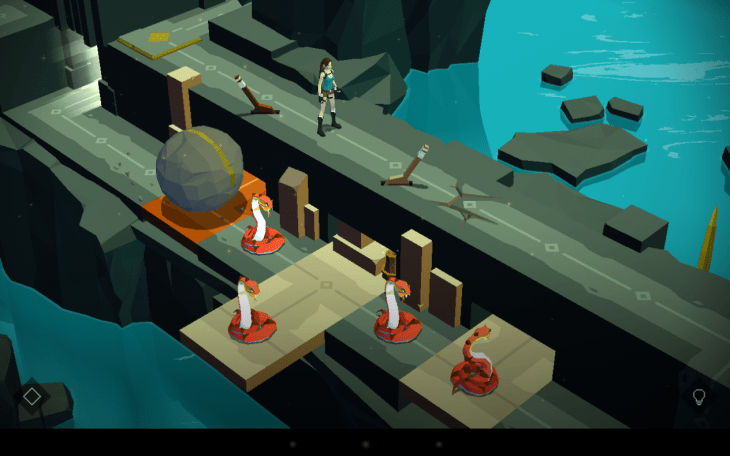 As everything else in the game, boulders move one tile at a time. They stop moving when meet an obstacles and keep being still even if you remove the obstacle. You need to push a switch to set the boulder in motion again.

You will face this deadly trap at later levels and wish for no more. Arrows shoot at whoever is on their way, be it Lara, snakes, spiders or an alligator. Sometimes, Lara can disable or activate them with a level or a button-tile to take out an enemy. Other times, Lara can take cover behind a column or… her enemy.

Lara can light a torch when she moves close to a fire pit, and torches scare away the beasts. If there is a spare tile behind the beast, it will move back, provided Lara moves face-front with the torch. Again, the beasts won’t attack if you approach them face-front with a torch. Use this technique to push the animals onto the buttons you can’t push by yourself. 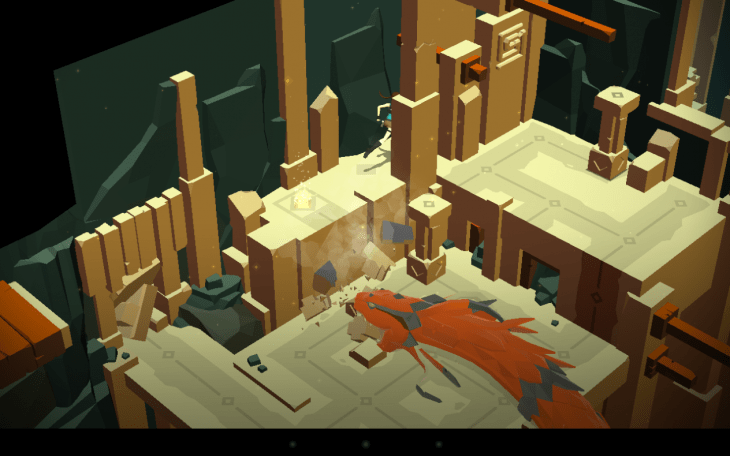 This beast is the scariest and brings death wherever it crawls. However, it has a modus operandi you can figure out and abuse, too. The catch is the big bad snake moves on orange tiles, crushing everything in its way. Keep an eye open for the traps you can use to weaken the deadly foe. Usually, Lara can step once on an orange tile before the orange snake attacks, provided the snake is above Lara. Your next move must be to take Lara away from its trajectory.

These switches appear closer to the final stages, and activate a sequence (an action) that only lasts for several moves. You then have these five or six moves to get where you need to be before the sequence comes to an end. 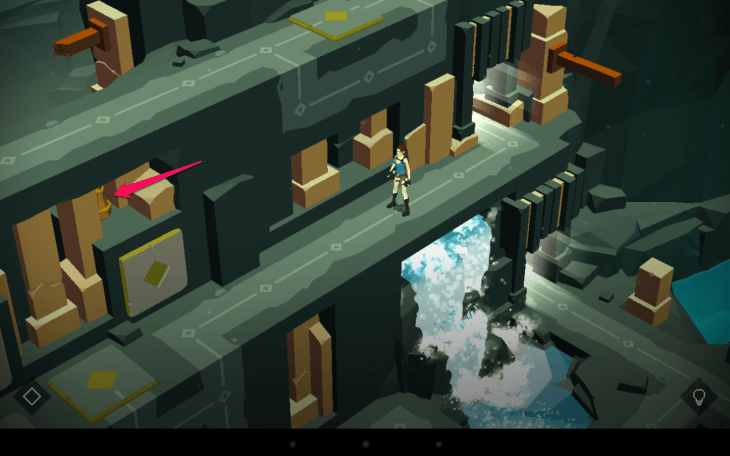 The Suit and tie

You unlock new outfits by collecting all the level-defined relics (and stones). You will find the available suits under the Watch icon in the game’s main menu, but mind that not all of them are unlockable. There are three suits you can only buy via IAPs, and the Hitman suit is one of  them, alas. The Midas suit becomes available if you collect all the stones in each area. Here is the breakdown of the relics/outfit scheme: 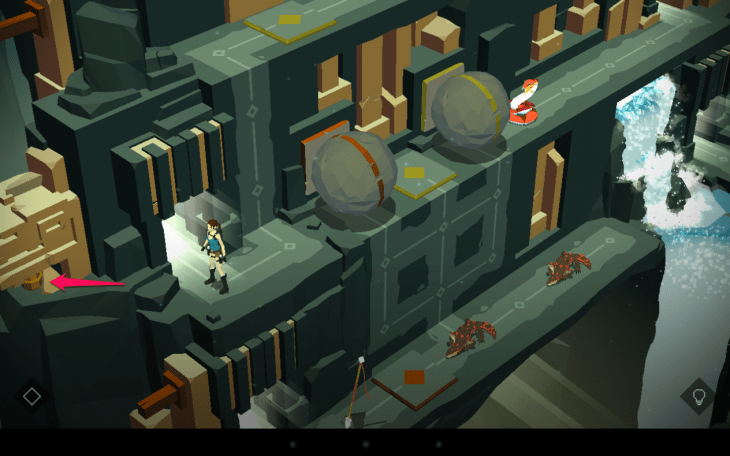 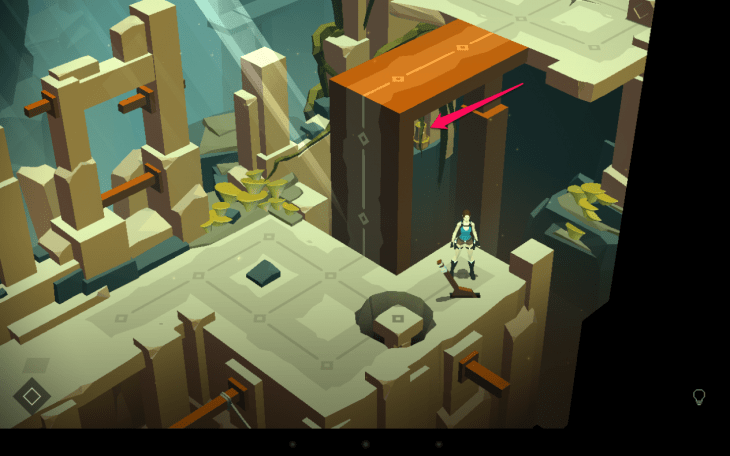 How to Know How Many Jars Are In A Level

You don’t see this information unless you go to the main menu and tap the Book icon. It will open into several book, chapters, and as you turn the pages you can see the number of jars in each level, as well as the number of them you have collected successfully and how many are still somewhere out there.

Hence, you don’t need to replay the entire game to open all the jars. Just go through the books, find the levels where you’ve missed a jar or two and scout those for the relic pieces and precious stones. 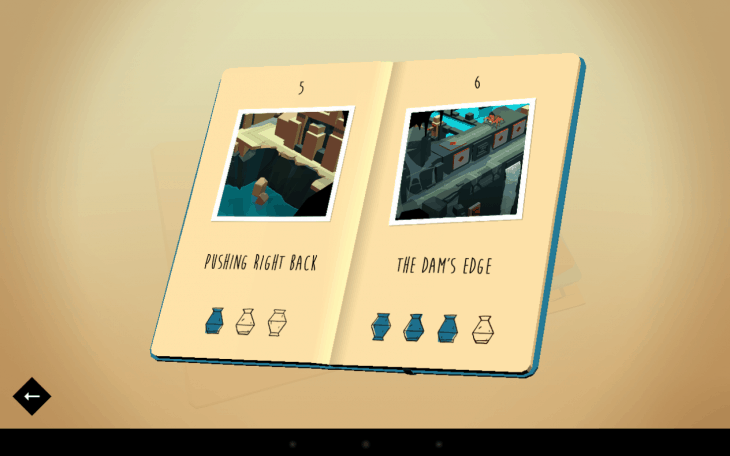 What do you usually say when you do not know a correct answer to a question? You say “this is a good question.” However, here you can find screenshots of the jars’ placement. All of them. This must have been a gigantic effort on the author’s part, but the screenshots explicitly show where the jars hide in every level. Enjoy!