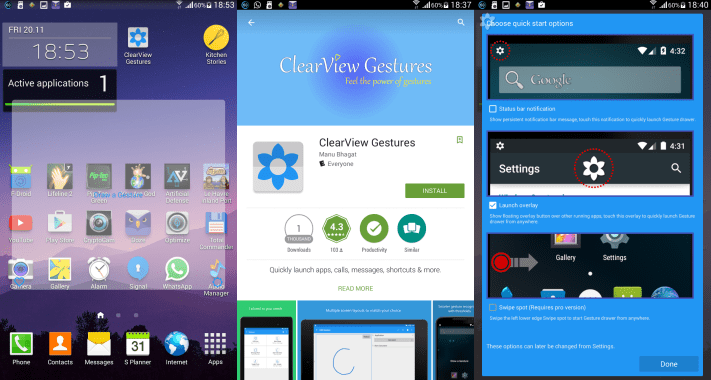 Android devices are becoming increasingly smart at everything, including the multitasking. Some devices like Oppo Find 5 Mini let you launch apps with the help of the gestures, but the native Android has yet to harness that capability to the full extent. When Google does exactly that, apps like ClearView Gestures will inevitably become redundant, but not for the users of the older Android versions. So until then, check out ClearView Gestures.

Every user has a couple of apps, actions he or she checks out or performs more often than any other app or action. Be it WhatsApp, Hangouts, a website, or dialing a specific contact, toggling WiFi or some other setting – it largely depends on your habits, behavior, circumstances. ClearView Gestures lets you assign specific gestures with specific actions – launch an app, dial a contact, go to a specific chat, toggle something, etc. You get the idea. The good part is you can do it from any screen, any app you are currently in. You don’t need to go to the home screen to swipe that heart and dial your sweetheart.

The app is free. Download, and install it and spend a couple of minutes training it. It’s easy. Draw a gesture you would memorize easily three times, then select the action it must perform and save it. The app does not require 100% accuracy; that’s why you draw the gesture three times, and I suggest each time you draw it you make slight discrepancies.

Once you have trained the gestures and set up their actions, you need to customize the app itself. To be able to recognize your gesture and perform the action from any screen and any app, ClearView needs to be activated – it does not monitor all your actions at all times. To let the app know the squiggle you are drawing on screen is meant for ClearView Gestures, you need to choose from several available options.

How to use it

A persistent notification in your notification bar is number one; a floating overlay icon is number two. The paid version also has swipe spots (number three) and a button pad that lets you launch your shortcuts without drawing (number four). In all honesty, the free version does the job, if you like the gesture approach in itself. ClearView Gestures also has quite a lot of customization options, and the one thing I am missing in its UI is the side-bat that would display the Menu and all the items on it. Because on several occasions, when I quit the app while I am in its Settings, the next time I tap on the floating icon it does not open the overlay box, but takes me to the app’s settings instead, which is weird because it adds the extra taps instead of eliminating them.

Using the feature when the app is set up is a delight. Say, you’re in any app, and want to check out your WhatsApp messages. No need to go to the home screen – you can tap the floating icon, and draw the gesture in the overlay box that appears on screen. The app launches your shortcut immediately.

Yes, Lollipop cards partially does the job, but if the app has not been launched yet, you still need to look for its launch icon. The functionality is useful to the extent you think it’s useful.

Some launchers and device management apps provide this functionality, for example Nova Launcher, DU Speed Booster and Clean Master, but you will need to grant these apps more monitoring permissions than they already have, which is something privacy-minded users don’t approve of. These apps effectively need to monitor your taps in order to recognize when you perform a gesture to launch an app, or when you are simply playing a game. Also, as is the case with Nova Launcher, you can perform these gesture commands from the home screen only. Finger Gesture Launcher and SwipePad are also very neat alternatives.

Overall, if you check your messages, chats or Twitter very frequently, you might harness the convenience of the gesture controls with a third-party app, and ClearView Gestures is a viable option.