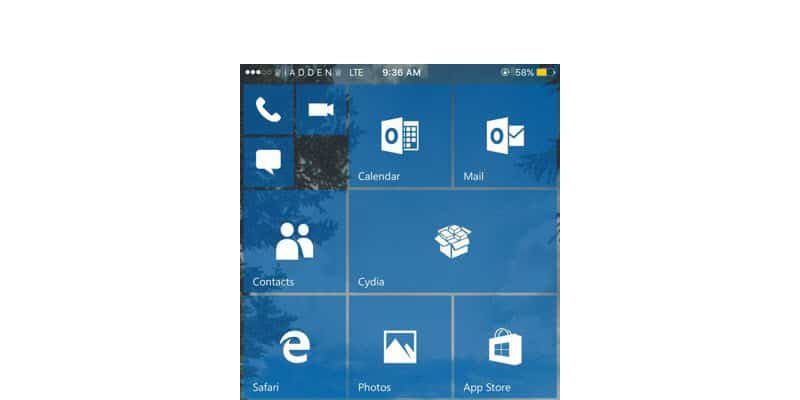 Perhaps one of the strongest features of Windows 10 Mobile is its uniquely designed interface. That’s certainly not enough to make you switch from iOS but you can make Apple’s mobile ecosystem look like Windows 10 Mobile if you own a jailbroken device.

Of course, iOS will work exactly the same as before, but you will be able to set up tiles on your home screen, instead of the traditional app icons.

The tweak provides tiles for almost all stock iOS apps and it is free of charge. Before you get too excited, I would like to point out that Redstone is currently in beta and you will likely experience bugs and weird behavior if you install it at this point. The developer made the source code available for anyone that wants to improve or test it on GitHub. If you’re still tempted to try Redstone and make iOS look like Windows 10 Mobile, you can also download the tweak from Cydia, by adding this repo ‘https://festival.ml/repo/’.

Redstone’s capabilities are very similar to an older tweak called Paragon that was a Windows Phone 8.1 theme for iOS. Besides the Windows 10 Mobile home screen layout, Redstone also comes with customizable animations for app opening and closing, accent color based personalization just like W10M, and an app list among others.

At this point, there are many Windows 10 Mobile stock features missing from Redstone, like Live Tiles, tile pinning, and app searching but considering the tweak is free and open-source (and according to the developer it will stay this way) we have great expectations from Redstone in the future.