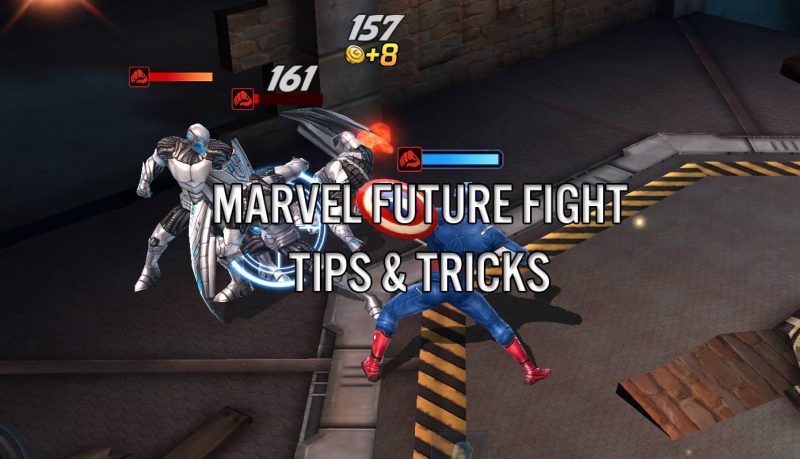 The latest mobile Marvel game arrived a couple weeks ago, and so far, it’s been off to a smashing success. Marvel Future Fight finally brings us a full-fledged Action-RPG set in the Marvel universe, with over 30 different playable characters. It’s a free to download game with an energy system and plenty of IAPs, but there’s also a pretty solid amount of content you can play through without spending a dime. Today, we’re going to share a few tips and tricks that will not only help you improve at the game, but potentially shed some light on how you can get more heroes to add to your arsenal.

Swap heroes regularly during combat to use abilities

Since you’re able to assemble a team of three heroes, each with their own unique abilities, it’s very beneficial to swap them out regularly during combat so you can utilize all of their abilities. If you use your abilities on the main hero to get the cool-down running, you can quickly switch to the next and use theirs while your main hero is recharging their abilities. By the time you’ve used all three heroes sets of abilities, the first one should be ready to use again, or at least very close (the cool-down to swap heroes can play a factor as well). Swapping them out usually helps you avoid more damage as well, from dodging attacks as well as just wiping your enemies out faster.

Choose at least one hero that counters the boss

Future Fight uses a combat triangle, which is how you can determine which heroes are innately more powerful than others. The four different types are Combat (Red), Blast (Blue), Speed (Green), and Universal. Universal is a bit different from the others, as it is completely neutral — meaning it doesn’t counter any other types, but also can’t be countered itself. Combat is a counter to Speed, Blast is a counter to Combat, and Speed is a counter to Blast. Alternatively, you can look at it as: Red > Green, Blue > Red, and Green > Blue. 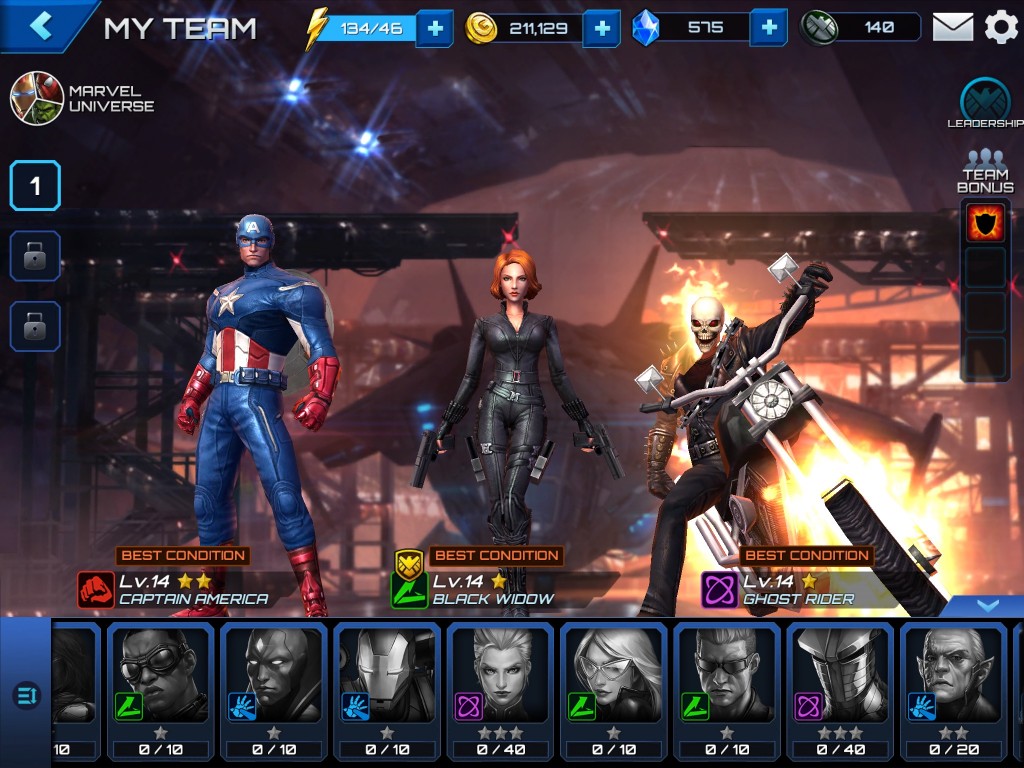 Try to keep this combat triangle in memory, and when you go to start a mission, look at what color type the boss is and use as many heroes that counter that type as you have. Of course, the exception would be if some of your heroes have a much lower level, worse gear, or less progressed abilities — in which case it isn’t quite worth it to counter.

The RPG elements run relatively deep in this game, and it can be a little confusing at first as far as how everything in the upgrade system works. Essentially, there are three different categories: gear, skills, and rank. Ranking up requires a lot of coins as well as biometrics, which are scarcely obtained, but ranking up is also extremely useful. Gear requires a smaller amount of coins as well as gear chips, which you’ll get regularly from completing missions. Skills simply require coins to upgrade, so this is something you should do quite often. 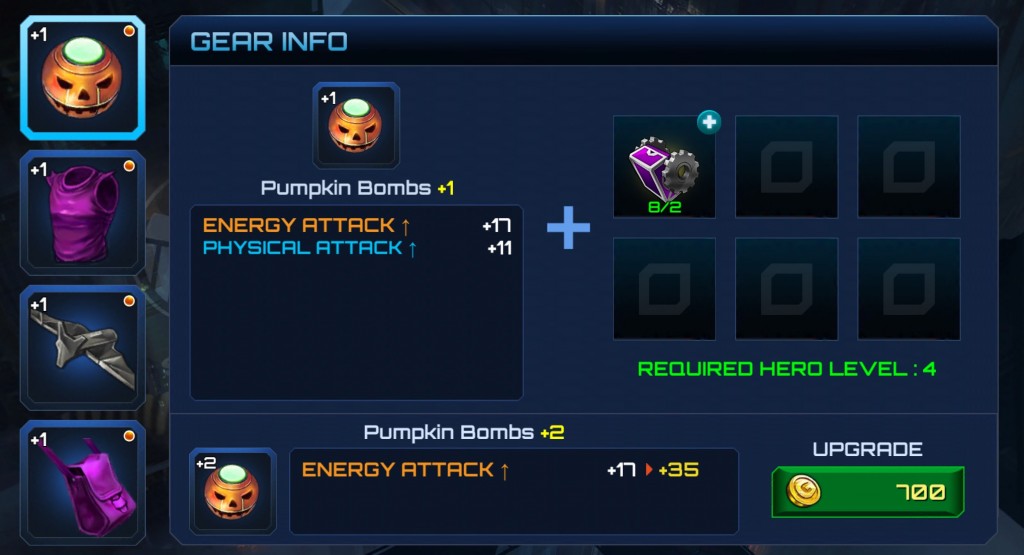 Gear chips aren’t extremely common, so you’ll want to upgrade gear a little more sparingly than skills. Try to focus on upgrading the gear for your main heroes, as opposed to evenly upgrading every hero you have. One other thing to look at is ISO-8, which gives a buff to whichever hero you put it on. You’ll likely get a few of these from the daily dimension chests, so be sure to utilize them.

How to unlock new heroes

I briefly mentioned biometrics above for ranking heroes up, but these are also the requirement to unlock a new hero. You’ll need 20 of a hero’s specific biometric to unlock it, and you can get these from numerous different sources, including: campaign missions, daily log-ins, chests, assemble points, and more. 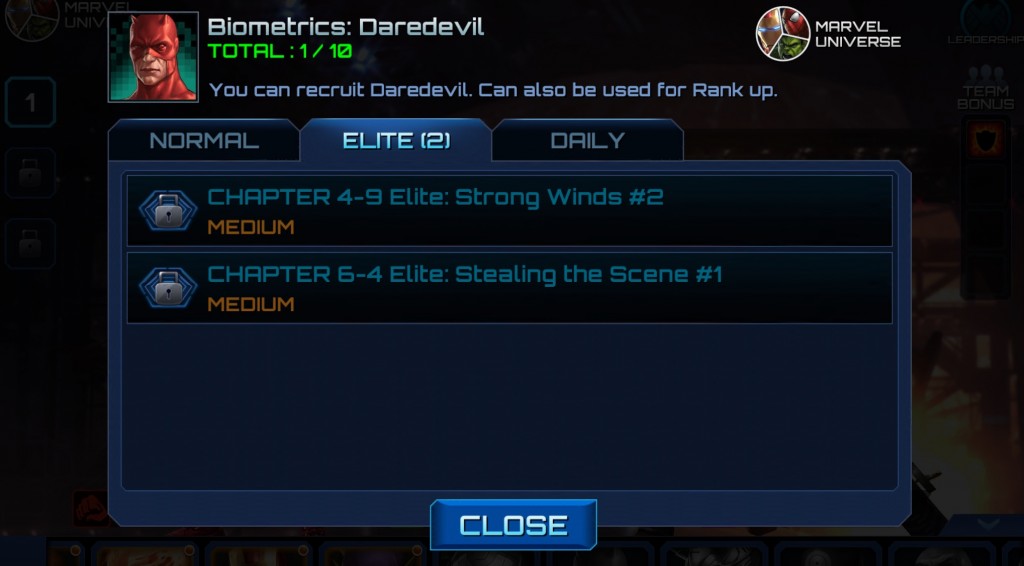 If you want to unlock a specific hero, your best bet is to find that hero in the menu, tap on it, and you’ll see a list of missions that drop it’s biometric. After that, it’s a matter of farming those missions until you have enough to unlock the hero. Usually these missions are ‘Elite’ missions, which we’ll talk about… Now!

Elite missions give the best rewards, and are the only source for certain items and biometrics. Unfortunately, there’s a limited amount of times you can play Elite missions every day, so you should make sure to utilize these as much as you can. Try to knock out your Elite mission plays before doing anything else, just in-case you don’t have enough time to get to them after your normal missions or arena matches. Energy can also play a factor, and if you aren’t paying attention to the cost, you could end up running out of energy and not being able to do your elite missions for the day.

You may have noticed something that says your hero is at best condition. This is achieved by giving them a rest, and using some other heroes for a while. Once the best condition status shows up, it lasts for several missions until the hero becomes tired again. 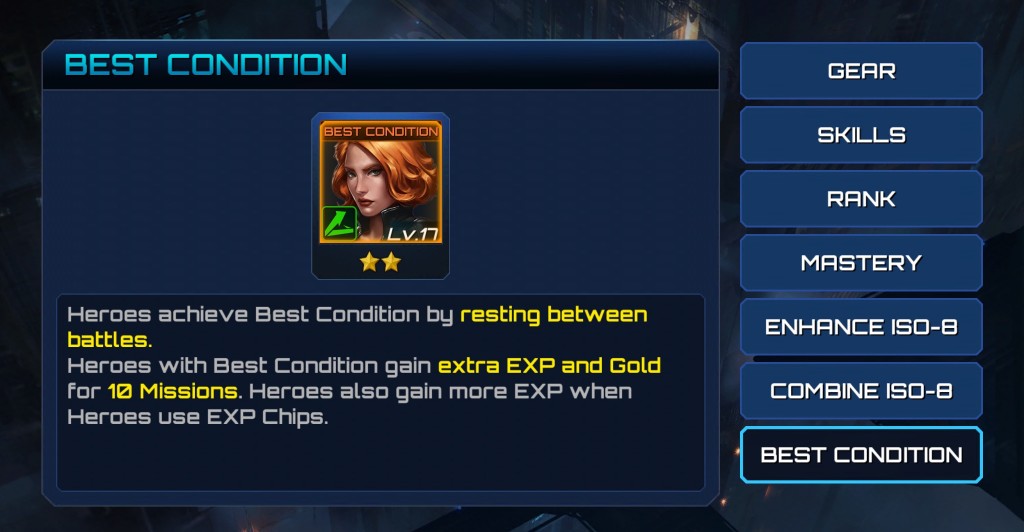 The benefit to being best condition, is bonus gold and EXP rewarded from the mission for your hero. You’ll also receive more bonus EXP when you use the EXP chips on a best condition hero — so make sure you never waste these on a hero that isn’t best condition.

Whenever you do a mission, you’ll be able to call in help from a random Future Fight user, which simply brings another AI hero into combat to briefly fight alongside you. After the mission is over, you can then send a friend request to that player. You should do this every time, and also check your inbox for new friend requests regularly. This is how you earn the currency “Assemble Points” which can be used to open a chest when you get 300 of them, or a 25 energy replenishment for 500. Friends are able to send assemble points back and forth, which also counts towards various achievements.

Log-in every day and don’t forget your free dimension chest!

This is about as easy of a tip as we can give, but it is also extremely rewarding. You get bonuses for logging into the game every day, and after a while, these are extremely beneficial. There will often be multiple bonuses for logging in daily, and sometimes this can even score you a free hero by logging in several days consecutively. Even if you don’t have time to do a mission, you should still try to open the app and collect your log-in reward.

You can also snag a free dimension chest every 24 hours, so remember to grab this as well. If possible, try to open it as soon as you can so you can get as many as possible — since it’s on a 24 hour timer and not a regular daily reset. These chests can give biometrics, ISO-8, and even free heroes!

Personally, I rarely ever spend a dime on IAPs, and so far that is the case with Marvel Future Fight. You are given a somewhat generous amount of crystals for free through log-in rewards, achievements, and special bonuses — so it can be a challenge to spend them without wasting them. I would recommend saving crystals until you have 750 so you can straight-up purchase a hero. You may be tempted to spend them on chests, which can reward a hero for a cheaper price, but it’s also random (and you can end up just receiving biometrics for a hero, instead of a full hero unlocked). Honestly, crystal spending won’t have a huge impact on your game unless you buy them, so don’t stress about this too much.

That does it for our Marvel Future Fight Tips & Tricks! Let us know what you thought in the comments section below, and feel free to share any tips you have for fellow future fighters.