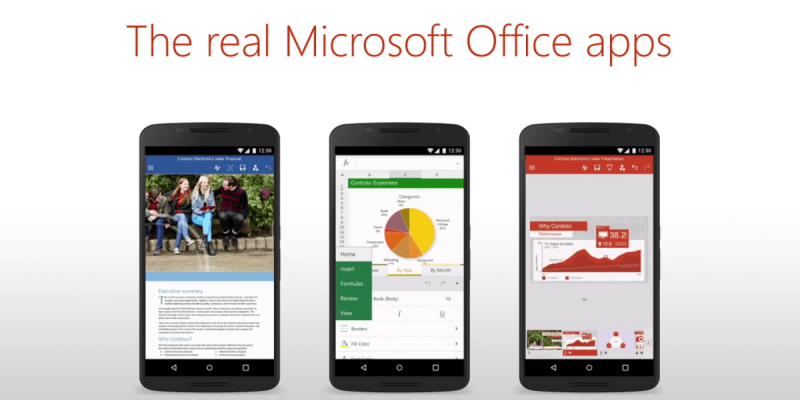 Office apps have been available for Android tablets since February, and their phone versions have just exited beta testing after a 5 week period. Finally, Android users get the free Office apps, tailored for small screens with a few limitations.

Word, PowerPoint and Excel apps only support devices with at least 1 GB of RAM and running under Android 4.4 KitKat or newer. Google’s own statistics show that only about 50% of Android users will be able to meet the software requirements for running the newly released Microsoft Office apps, and factoring in the RAM requirements, we’re looking at quite a large number of users who won’t be able to use them.

Microsoft offers basic viewing and editing features in the free apps, but an Office 365 subscription is needed to unlock all the features. Ebun Onagoruva, one of Microsoft’s product managers said to CNET, the company is striving to make Office the default productivity suite for as many people as possible.

Satya Nadella’s plans are to change how people think of software today – meaning products bought with one-time licenses – and change that into annual subscriptions. The subscription-based payment model is already being used by other big names in the industry, and Microsoft’s agenda is following the current trend.

During preview testing, Microsoft used feedback from almost 2,000 Android phone models in 83 countries. One of the features implemented based on user requests is the simpler method of connecting Office apps to third-party storage services like Box and Google Drive, said Kirk Koenigsbauer, Corporate VP at Microsoft Office Division, in the official announcement.

Follow us on Pinterest, Google+, Facebook and Twitter to receive our latest apps & game reviews, news, tips and how tos for Android, iOS and Windows Phone. You’re also welcome to join the Pocketmeta forums for more app related talk!