“I stay up late every night and realize it’s a bad idea every morning,” – someone on the Internet. Mimicker Alarm comes from the Microsoft Garage, and wants to be your go-to alarm app if waking up in the morning is a problem to you. Until our devices are mature enough to have feet and hands to spray some icy-cold water in our face each morning, the developers will have to think of trickier ways to get the sleeping beauties out of the stasis.

Microsoft Garage has not invented a bicycle with Mimicker, though. The idea of forcing users to play games or solve problems as a way to disable the alarm is not new, but let’s take a look at how Mimicker approaches it. The app forces you to “mimic” a given action, which you define the night before as you set your alarm. One of the craziest ideas is to snap a selfie to disable the alarm. The app nefariously offers you should share that selfie with your friends. Ha-ha. Thank goodness that’s optional.

The app gives you a very limited amount of seconds to complete the mimic, and if you don’t make it in time, it assumes you dozed off again. So, it starts nagging you. However, if you start solving the mimic and turn off your screen, the timer stops. This way, you can cheat and go back to sleep. I am assuming it’s a rough edge that will get ironed out in the next update.

The app strongly suggests you need to try the mimic before you rely on this alarm. Not because it might fail to wake you up, but because you might smash your device when it nags you with a mimic the next morning. The list of mimics includes making faces to match the app’s defined emotion, capture a specific color with your camera, and repeat a tongue twister (my favorite because I’m good at them). 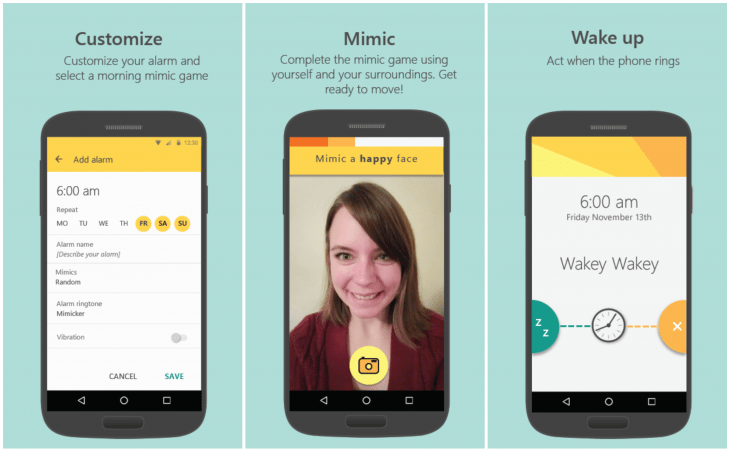 As far as the alarm app customization goes, Mimicker is rather standard. Customize your alarm with time, day, snooze and ringtone, choose your mimic, and store all your alarms in the app. You can also share your mimic pictures with your friends via the popular social networks.

One other thing. Mimicker “works best” when it’s connected to the Internet, although it’s optional. I disapprove of this practice because the night is when the battery should be at rest, and the data should not be rambling to and from the device. Besides, its availability is currently not worldwide. Also, the app uploads your images and audio or video data as well as the anonymous usage data to Project Oxford APIs, and Microsoft will use it to improve the service. Which brings me to the conclusion the privacy-minded will skip the offer, minding the nefarious facial and voice recognition practices of the tech giants.

Mimicker Alarm is free on Google Play store, and besides the limited availability to select countries it also seems to have issues with some Android devices, like Nexus. Check it out if you are a big Microsoft fan, or check out our alarm apps roundups for Android and iOS. Don’t forget to share your impressions with us in the comments below, and follow PocketMeta for the hand-picked guides, reviews and roundups on Android, iOS and Windows Phone apps, games and software.