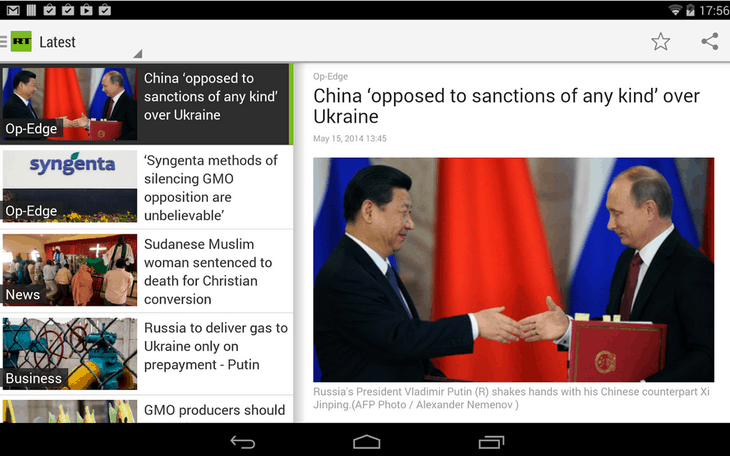 It’s a vague notion these days – independent news agencies, but we wanted to give you an alternative to the mainstream media like BBC, CNN and Yahoo alongside Google Newsstand and Currents. Yes, there are plenty of RSS feed readers, and we will get to reviewing the trendiest soon, but for now, we did a search for alternative media outlets that offer mobile apps and have a reputation for making the State Dept. mad, which in itself may be a credibility fore to some. 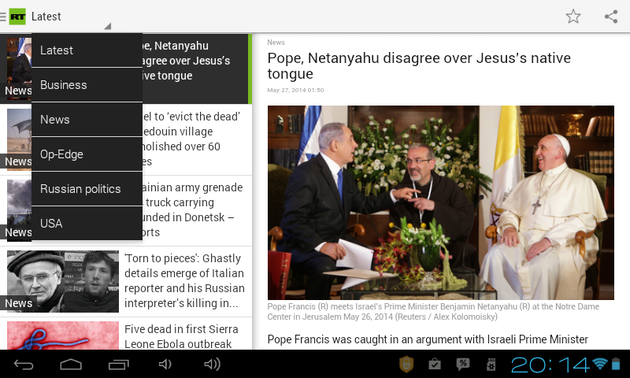 The list begins with RT because it’s one of the neatest and most advanced mobile apps with a slew of features that actually perform well.

A 24/7 news channel, RT has a fore in reporting events from the analytical rather than mainstream standpoint, which often results in interesting and quite different stories than those reported on CNN. You get a wide selection of international news, challenging reports and interviews. It is available in English, Spanish, and Arabic and, probably, Russian, but I haven’t found the Russian app.

The app has a neat video streaming of their reports from over 100 countries. The main menu includes Latest, Business, News, Op-Edge, Russian Politics and USA. If you tap on the top-left green RT button, you will see another selection of menus to discover – Feeds, Shows, In Vision, In Motion, Live and Bookmarks. 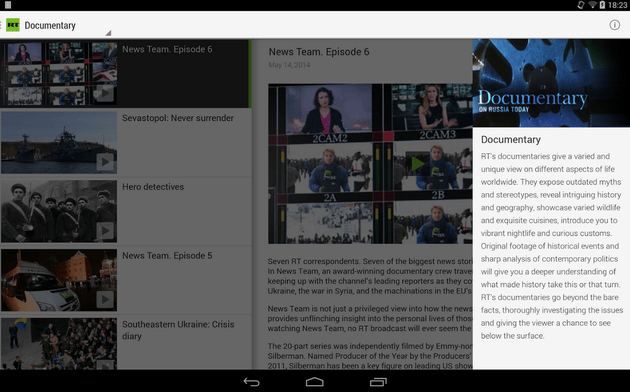 The app has an in-built video streaming player, so you don’t need to switch to YouTube or browser, and as long as you have stable Internet connection you can watch the recorded shows, like Larry King Now and Politicking, Technology Update, Keiser Report, The Truthseeker, Why You Should Care, Venture Capital, CrossTalk, a large library of documentary shows as well as watch the channel live streaming. You will also find sports news, technology and market analytics, no comments images and videos of natural and man-made disasters.

You can bookmark any article you liked by tapping on a star icon at the top right corner, or share a link to the article by tapping on the share button.

Yes, RT is government-funded, and when we review apps, we review their features and performance, as well as the meaningful contents. RT gets 5/5 stars for backing up their reports with evidence and providing meaningful insight to the stories wrapped up in a nicely done, attractive app that works like charm. It’s fast, convenient, has the video streaming and a huge selection of articles, shows, video reports and live streaming. 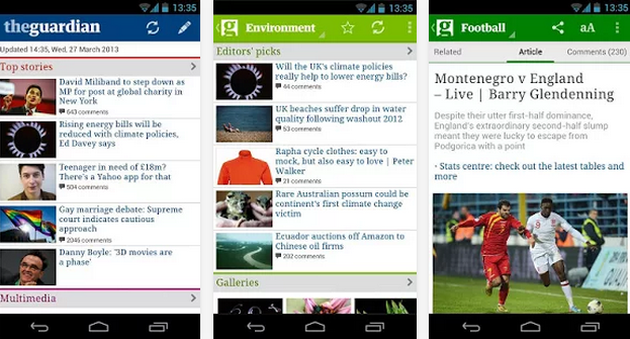 The Guardian is a well-established news source, but it acquired huge popularity thanks to Glenn Greenwald’s publications of Edward Snowden’s files last year, and remains a source of international and UK news to many readers until now, even though we hear the UK government threatens to shut down the newspaper if they don’t stop publishing Snowden files. 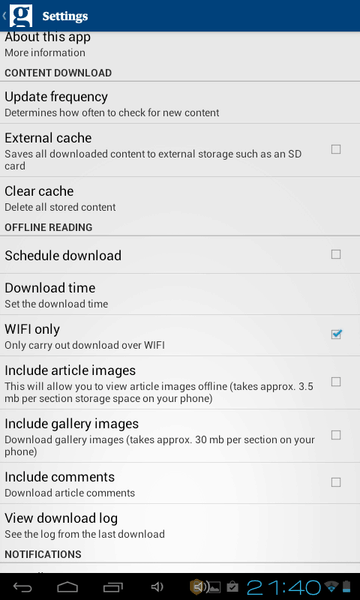 The mobile app is packed with news of all the categories you can find on the Guardian website, from tech and sports, to reviews and current news. You can watch videos, picture galleries and podcasts, as well as register, comment and share news. The app also has a premium subscription for those who want access to Crosswords, exclusive content and no-ad experience, as well as live soccer scores, alerts for big soccer news stories. 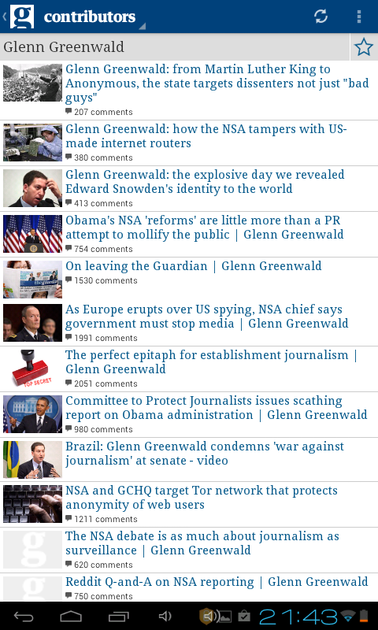 The greatest feature is you can download your favorites for offline reading, and even schedule a daily download. Check out the extensive Settings menu where you can customize basically any aspect of the app to suit your liking. You can even see the contributors and select the ones you like reading most to add to your customized feed. Overall, the Guardian is a very well done news app and a delight to use.

This 24/7 live news channel also offers a mobile app with the news from the Middle East point of view, which can also do you good if you want a broader perspective on international affairs. It is a widely popular channel with a reach into more than 100 countries worldwide. You will get the latest news, stories in the spotlight, featured news, opinions and an English blog.

The app has a feature to add and remove social networks accounts, share stories on them via the app, as well as send news via email. You can set your location in the app’s settings and change it to get the current weather report. You can add and delete articles to My News section, view comments, news videos, live streaming, breaking news, pictures gallery, as well as become a contributor by sending your media to Al Jazeera. 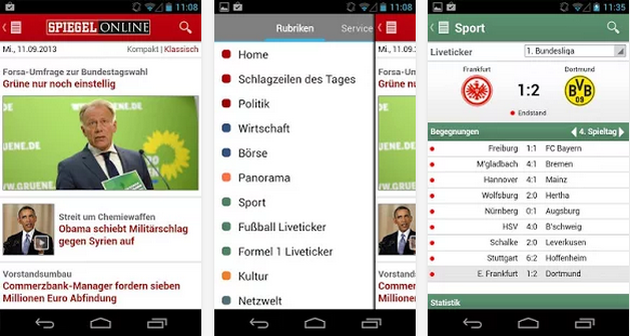 The main reason why der Spiegel is on the list is its WikiLeaks Cables, where you can discover a lot of interesting insight wrapped in human language, as opposed to the original WikiLeaks original reports. Besides, der Spiegel will appeal to Europeans and anyone interested in world politics and international affairs.

You can also access der Spiegel International from your browser, while the app gives you instant access to the latest news, reports, analytics, and interviews.

Note that Android app is in German, while the English version is available for iOS devices and from any browser.

The app will send you push notifications about the most trending news and soccer alerts for the teams of your choice. You will be able to access video and photo galleries, weather information and stock prices, as well as share news via email and social networks.

INFOWARS for Android or Alex Jones Radio for iOS 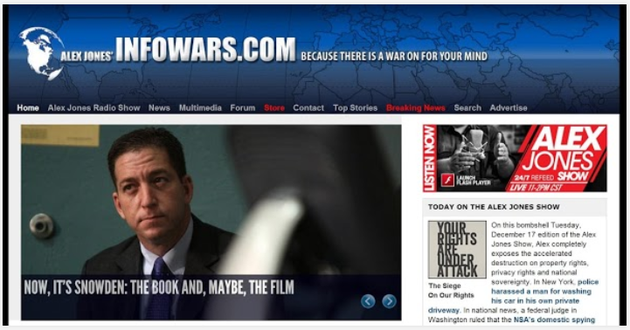 Without much ado, here is Alex Jones’ InforWars.com mobile app for those who appreciate a little dose of sobriety once in a while, or on a constant basis. The media positions itself as a free speech alternative to the mainstream news, which fits our list perfectly well. So, if you are unhappy with the mainstream media and have a vague feeling they may be feeding you soap instead of news, check out this mostly U.S.-focused resource for news, analysis, and insight into corruption, police brutality, veterans, taxes, national debt and more.

While the app itself may not be as advanced and neat as the above-mentioned news apps, but this is the case of content value vs tech value of an app. You have to watch videos via YouTube, which is a definite flaw, but you can bypass installing YouTube by watching videos on YouTube in your browser.

The Real Truth for Android 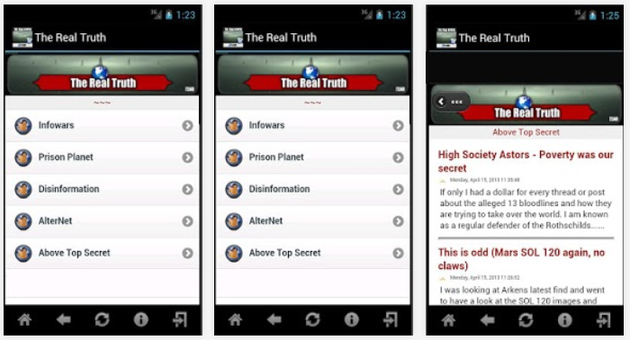 This is basically a news feed reader with a definite focus on particular media outlets that voice opinions alternative to that of the mainstream media.

The app itself offers a neat way to customize your news feed, such as show or hide menu bar, images, dates, select text and image size, and read the article in a webpage or forced mobile version of it.

That’s it for today. If you have more app suggestions, feel free to share them with us in the comments below!