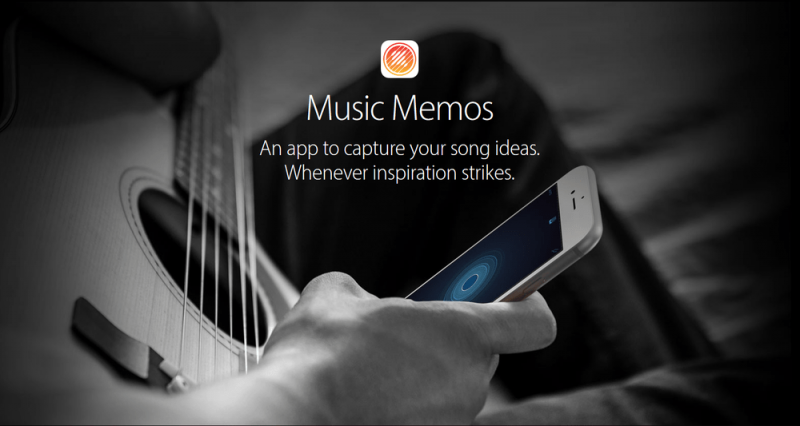 Apple does not launch an app per day, so yes, Music Memos is kind of a big deal in the apps world. Musicians and amateurs should definitely check it out. In the first place, mind that the app requires iOS 9.1 and later, so unless you are updated leave it be. Next, keep in mind that the app is not a musician’s powerhouse, but rather a quick tool for the musicians to capture their song ideas. Think of it as a note taking app Apple Notes for the writer – for quick and rough drafts. Seems fair enough because the writers have plenty of handy apps for jotting down their ideas, designers have a slew of basic and professional tools they use on their iPads, so it was about time the descendants of Orpheus got their dedicated app.

The main purpose of Music Memos is to let you capture that Muse whenever she comes and quickly play a tune and record it with your iPhone. You must know how Vyvyan Ayrs of Cloud Atlas felt as he desperately tried to remember the tune he heard in his sleep, from the far-away future Papa Song bar in Neo Seoul. It’s sipping through his fingers and flies away. A few seconds more and it’s gone. It’s painful. With Music Memos, it won’t happen to you.

Here is what you should know about Music Memos

Yep, currently the app supports only the latest versions of the operating system.

Music Memos saves your tunes uncompressed to avoid sound quality deterioration, which seems like the right move because recording music with a smartphone suggests significant quality loss as such. Hence, the records are uncompressed.

The app also has an in-built chromatic tuner that analyzes the pitch of the notes and draws a graph that shows what it think you meant to play and if there are any deviations from the target note.

Another nifty perk is the chromatic pitch analysis that creates a waveform split into sections based on the pitch of your recording, the way the app perceives it. Each section has the pitch annotation.

Then there is an in-built automatic bass player based on the pitch data, which lets the app to generate the base lines for your recording. Moreover, there is an automatic drummer that attempts to catch the tempo of your music to add its beats to your tune.

The app lets you change the key signature, edit the chords by opening the chord symbol and scrolling down to choose the right one. You can change the downbeat for the drums, too. You can trim the unnecessary pieces of the recording from the app itself. 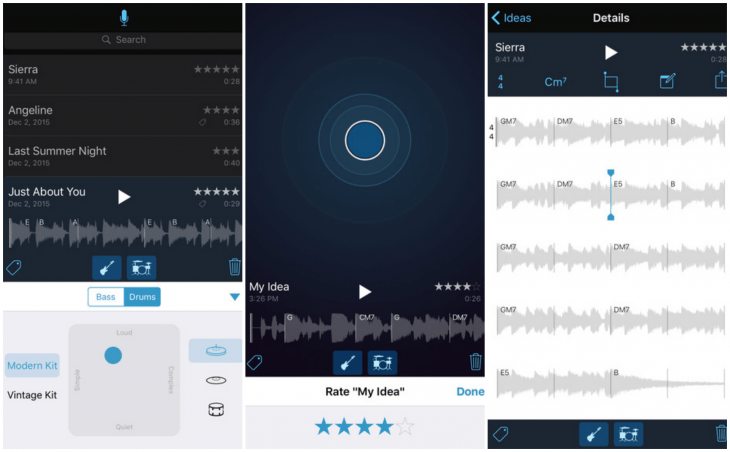 After you are done recording, fiddling with the chords and drums, and trimming, you can upload your file to the Apple Music Connect if you have an account, or keep working with it with GarageBand. You can store it in your iCloud Drive, email it, export to your Mac, upload to SoundCloud or YouTube.

Music Memos also manages your library of recording, so you can tag and rate them, rename, delete and backup to iCloud. You can also lets you track the comments and lyric suggestions, guitar tunings and capo position for your recordings.

The app is free and brand new, so some users have trouble finding it. In the first place, note the OS version requirement – 9.1+. If your device is eligible, and you still can’t find it on the App Store, either follow the link provided in the article, or simply find any app by Apple, tap on the developer’s name “Apple” and you will see the full list if its apps, including the Music Memos.

It may not be as feature-rich as you’d want, but it’s a quick, handy and free tool to let you capture those musical “Aha!” moments. The pitch annotations, drummer, and bass player give you a little heads up help from the app on how your ideas might play out with a band. Since capturing chord progressions is one of the hardest parts in terms of generating ideas, Music Memos addresses just that, and it does it quite well. You try and share your impressions in the comments below.

Don’t forget to follow PocketMeta on Facebook, Twitter or Google+ for the hand-picked guides, reviews and roundups of all things in apps and games on Android, iOS and Windows Phone.